As Early Admissions Rise, So Does Pressure 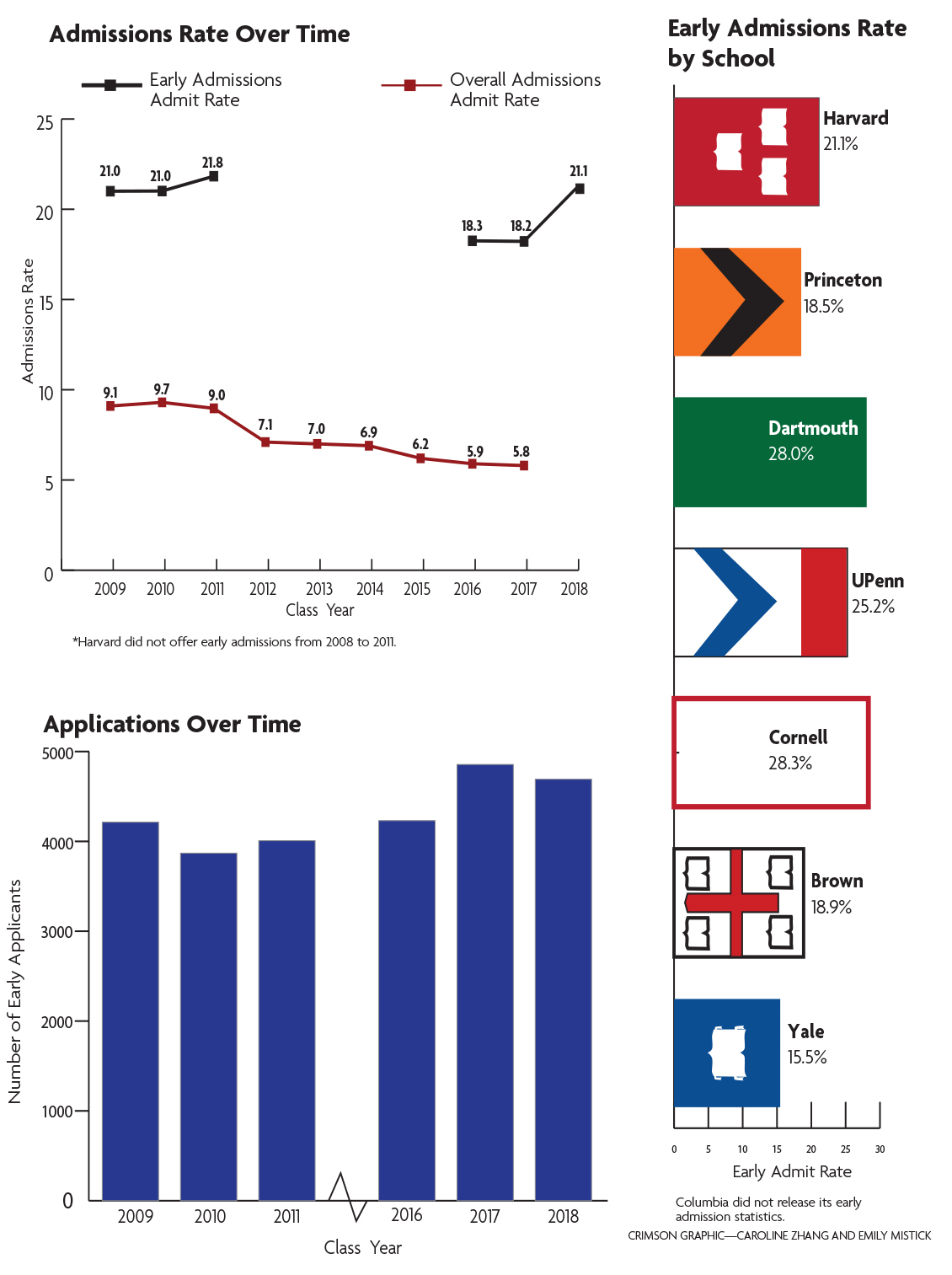 For the nearly 30,000 high school seniors who applied regular decision to Harvard’s Class of 2018, the number of unread emails in their inboxes will inconspicuously jump by one Thursday afternoon. After three months of anticipation, applicants to Harvard will click on an email which contains either congratulations or apologies.

But while their peers are anxiously watching their inboxes, 992 students have already received the golden ticket of admission through Harvard’s restrictive early action program. Those 992 students—the highest number admitted early in the last six early admissions cycles—represent about half of the approximately 2,000 students who will be admitted to the Class of 2018, based on analysis of admissions results from previous years. 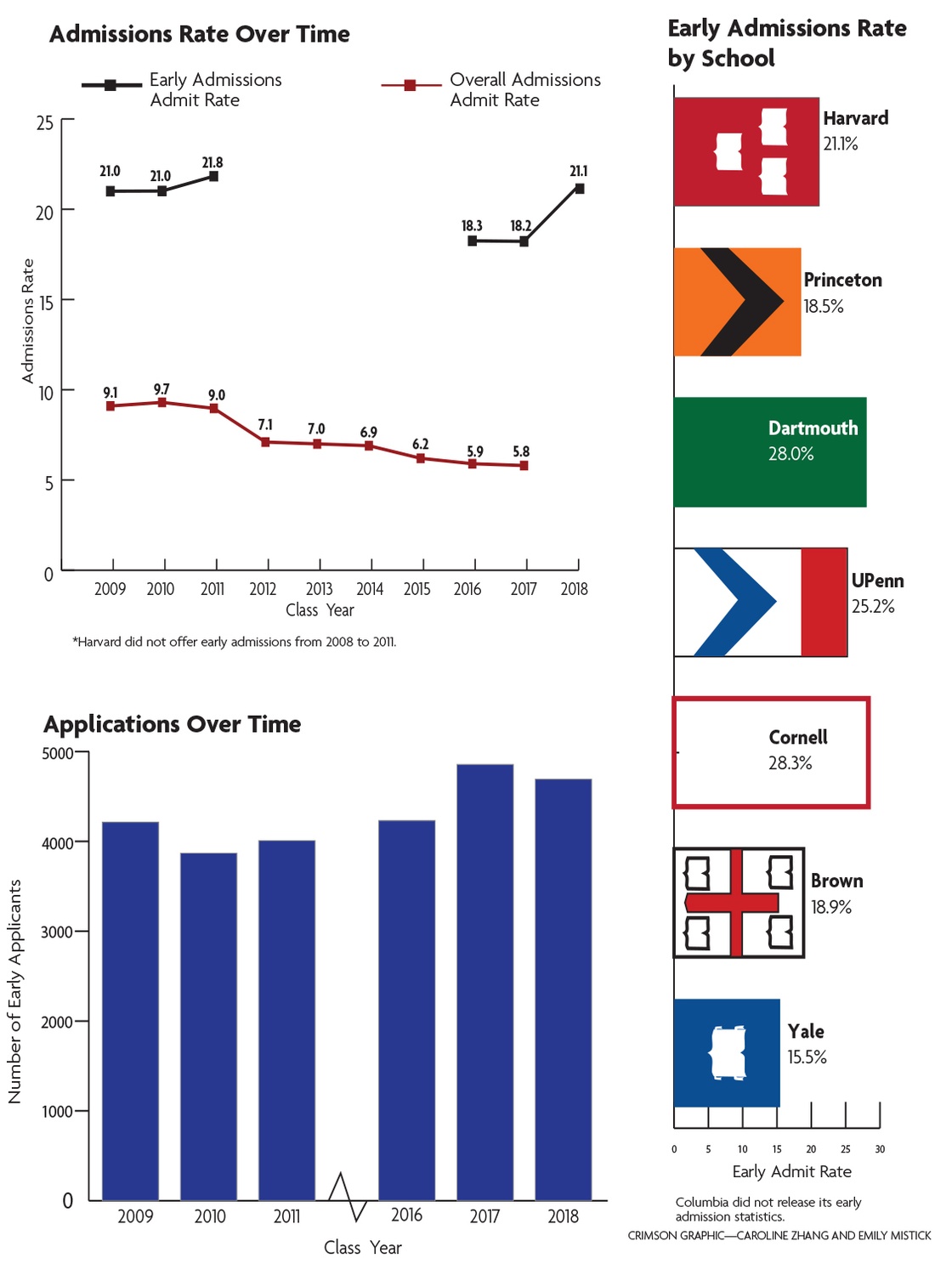 By Emily A. Mistick and Caroline T. Zhang

With more students applying and being accepted early, admissions counselors and experts say that the admissions process has been pushed earlier and earlier for many students in recent years.

“The admissions process is really beginning at age 15 in a lot of instances, instead of age 17,” Steven R. Goodman, an educational consultant and admissions strategist, said in an interview. “In light of this, students need to visit colleges early in order to be prepared earlier.”

While early birds are catching many acceptances, college counselors and students alike view the climate of early acceptance programs with ambivalence. Some say the programs can give students a beneficial head start, but others say they merely increase pressures and force certain demographics out of the ivy-covered gates.

THE RETURN OF THE EARLY BIRD APPLICANT

Prompted by the rationale that early acceptance policies tended to disadvantage students from lower socioeconomic backgrounds, Harvard’s Office of Admissions and Financial Aid eliminated the early action option for applications to the Class of 2012. The University of Virginia and Princeton University followed suit shortly thereafter and eliminated their early action programs.

At the time of the announcement in 2006, Dean of Admissions and Financial Aid William R. Fitzsimmons ’67 said the University would re-evaluate its admissions processes at the end of each admissions cycle and how they affected the demographics of the applicant pool.

In 2011, after a similar review, Harvard, along with the University of Virginia and Princeton, announced that the early action option would return for students applying to the Class of 2016.

“We looked carefully at trends in Harvard admissions these past years and saw that many highly talented students, including some of the best-prepared low-income and underrepresented minority students, were choosing programs with an early-action option, and therefore were missing out on the opportunity to consider Harvard,” Dean of the Faculty of Arts and Sciences Michael D. Smith said in a statement at the time.

This year, applicants to the Class of 2018 represented the third early action pool since its reinstatement in 2011. Though the number of early applicants was slightly fewer than last year, the number admitted rose by just over 100, from 885 to 992.

INSIDE THE MIND OF THE CONTEMPORARY EARLY BIRD

When Bryan T. Stromer, a graduate of the the New York City Lab School for Collaborative Studies and current freshman at Vanderbilt, started his college search, he noticed pressure among top students to apply early. Although Stromer said that his school sent students to a variety of places, the students applying to elite universities often felt a stronger push to apply early.

“The people applying to [elite universities] felt pressure to apply early just because how competitive it is to get into those...and with the lower rank schools, people felt they could wait,” Stromer said.

Stromer, who chronicled his admissions process on The Choice blog for The New York Times, added that many students felt that applying early offered them an opportunity to be viewed in more depth by admissions officers than if they were to apply regular in a pool of tens of thousands of students.

“Just logistically, the early application is always less than the regular admissions pool, but it’s the same number of staff looking [at applications],” Stromer said. “If you ask the admissions counselor they will probably say no, but it makes sense to me that they would have more time per application to review [early].”

High School admissions counselors and experts said that they observed a similar sentiment among students they advise.

Kristen A. Learner, the director of college counseling at The Benjamin School in North Palm Beach, Fla., said that her staff tries to get to know students early on and start the discussion sooner rather than later to ensure students can apply to a school they feel is the “right fit.”

“At a college preparatory school where 100 percent of students go to college, the conversation is there early on,” said Learner, adding that she encourages students to apply when they “put their best foot forward,” whether that be early or regular.

Jeffrey Wong, another counselor at The Benjamin School and former admissions offer at Brandeis University, said that it is evident that many schools have higher acceptance rates during their early programs than during their regular programs.

“We are not going to lie to them when we see schools that have drastically different acceptances rates for early decision or regular,” Wong said.

Learner noted that at The Benjamin School nearly a third of students will apply early decision to a college, and well over half the class will apply under some type of early program.

Goodman said the push for students to start applications earlier affects Harvard, even though the University uses a single choice early action program, under which a student may not apply to another college but is not bound to matriculate to Harvard.

“If everybody is preparing earlier, then that changes the landscape for everybody, including Harvard,” Goodman said.

ROOM LEFT IN THE ADMISSIONS NEST

Fitzsimmons said that although there are generally still some differences demographically between the type of students applying early versus those who apply regular decision, the diversity of the early pool is becoming more diverse.

“While our early pool is still not representative of the rest of what the class is going to look like, it’s certainly more so than was the case in the past,” Fitzsimmons said in an interview.

Addressing concerns that the regular admissions rate is far lower than the early admissions rate, Fitzsimmons said that students have the same chance of getting in no matter the time they apply and will receive the same thorough review of their applications during both processes. In addition, he noted that the early action pool is a generally stronger academically and extracurricularly.

While this year saw 992 early acceptances, Fitzsimmons said that his office has always been careful and conservative about early admissions decisions.

“It would be foolish, for a [college] to admit [students early] and not leave enough space for terrific kids,” Fitzsimmons said.

Gay S. Pepper, former associate dean of admission at the University of Pennsylvania and current college counselor, said that she applauds Harvard’s early action program as a “godsend for kids.”

She also said that she was sure Harvard was mindful of the types of students applying regular and would reserve sufficient spaces.

“I think that the colleges know the kind of underserved students who may have greater potential than say a student at a private school...is probably going to be applying regular decision,” said Pepper. “So the colleges want to make sure they have plenty of space in their incoming class for these very talented kids.”

In the end, Pepper said that the non-binding early admissions programs are “pro-student” because they avoid the permanency that comes with early decision. Pepper advises students against applying early based only pressures, such as admissions rate comparisons, when they may not have finished their college search.

“[Students who are] gaming the system and not making good educational choices are not necessarily happy with their decisions,” Pepper said.

An earlier version of a graphic accompanying this article incorrectly stated the early admissions rate for Harvard's Calss of 2018. In fact, it was 21.1 percent.