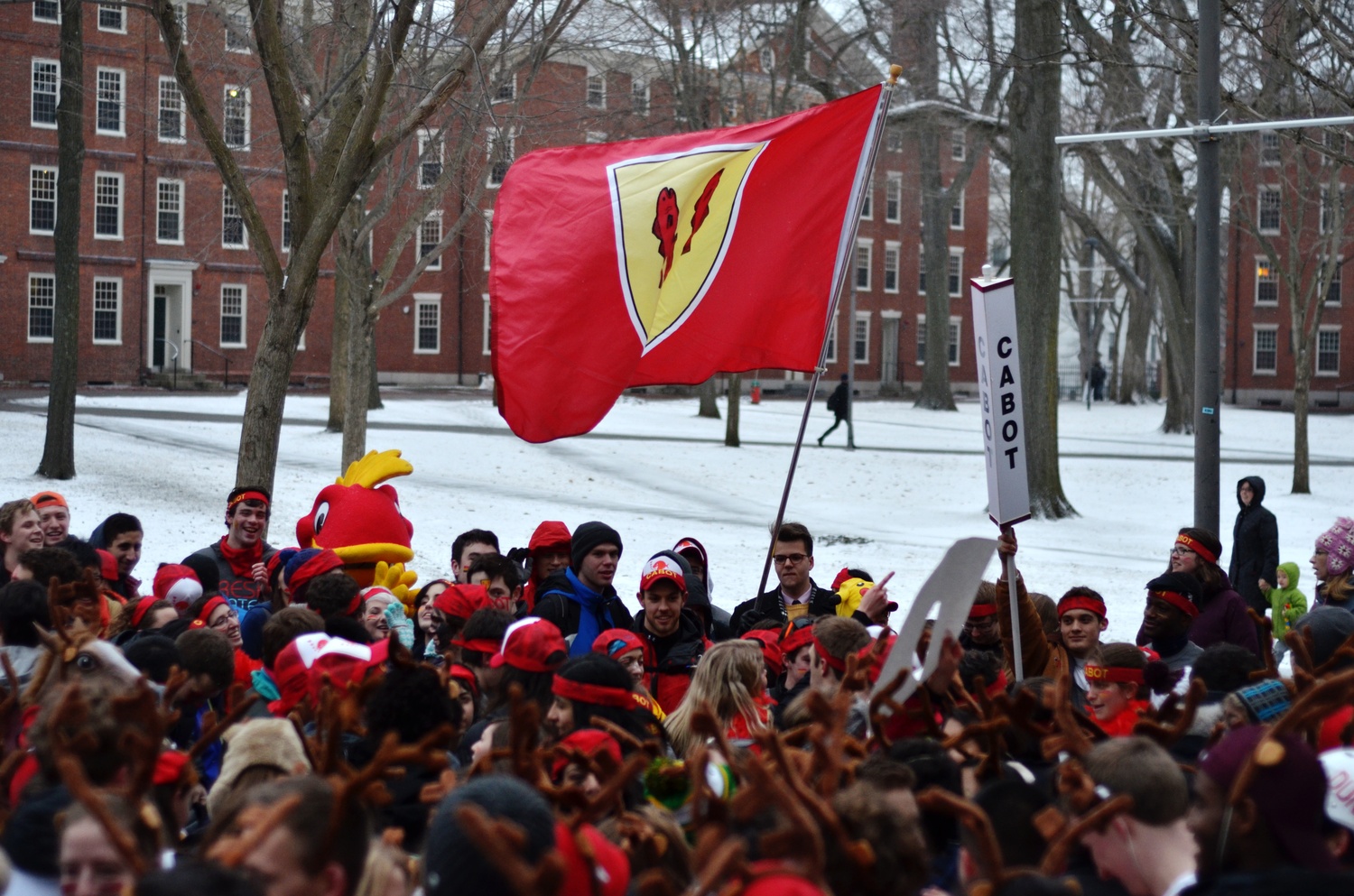 I awoke at 6 a.m. on March 13 to the hiss of my radiator and the loud, excited chatter of my blockmates in the hallway. It was Housing Day morning, my first as an upperclassman in Cabot House. I debated with myself whether to get up at all, anticipating the faces of freshmen—ranging from (hopefully) indifferent to (probably) teary-eyed—whose fates I would soon deliver.
By Julia I. Biedry

I awoke at 6 a.m. on March 13 to the hiss of my radiator and the loud, excited chatter of my blockmates in the hallway. It was Housing Day morning, my first as an upperclassman in Cabot House. I debated with myself whether to get up at all, anticipating the faces of freshmen—ranging from (hopefully) indifferent to (probably) teary-eyed—whose fates I would soon deliver.

My blockmates banged on the door, saying that I needed to get up if I wanted a free t-shirt.

Our House Masters, our resident dean, and their children were there handing out breakfast food and Cabot tattoos. The mood was infectious. I finally felt like I was allowed to feel House pride. My friends and I painted faces, snapped silly photos, and got psyched up to storm the Yard.

At exactly 7 a.m., the Cabot army trekked through the fresh coating of snow to the Yard. Impressed by the turnout, I forgot the cold as we chanted and clapped. Cabot was the second house to reach the John Harvard Statue, with only Kirkland arriving earlier. Considering we had walked from the Quad, it was pretty impressive.

A Cabot tricyclist with a boombox in tow pumped tunes into the crowd, and Kirkland and Cabot exchanged some friendly-competitive chants. (Kirkland quickly quieted when we started shouting “n+1!”) As other Houses filled the Yard, the scene got more festive, as well as more confusing (what was Sigma Chi doing there?). The Yard rang with the cacophony of students’ cheers and the clicking of tourists’ cameras.

Cabot’s anthem morphed to “Dean Rakesh!”, and the man himself was quickly hoisted on a Cabotian’s shoulders. I soon realized that the Cabot flag had been strung up from University Hall. 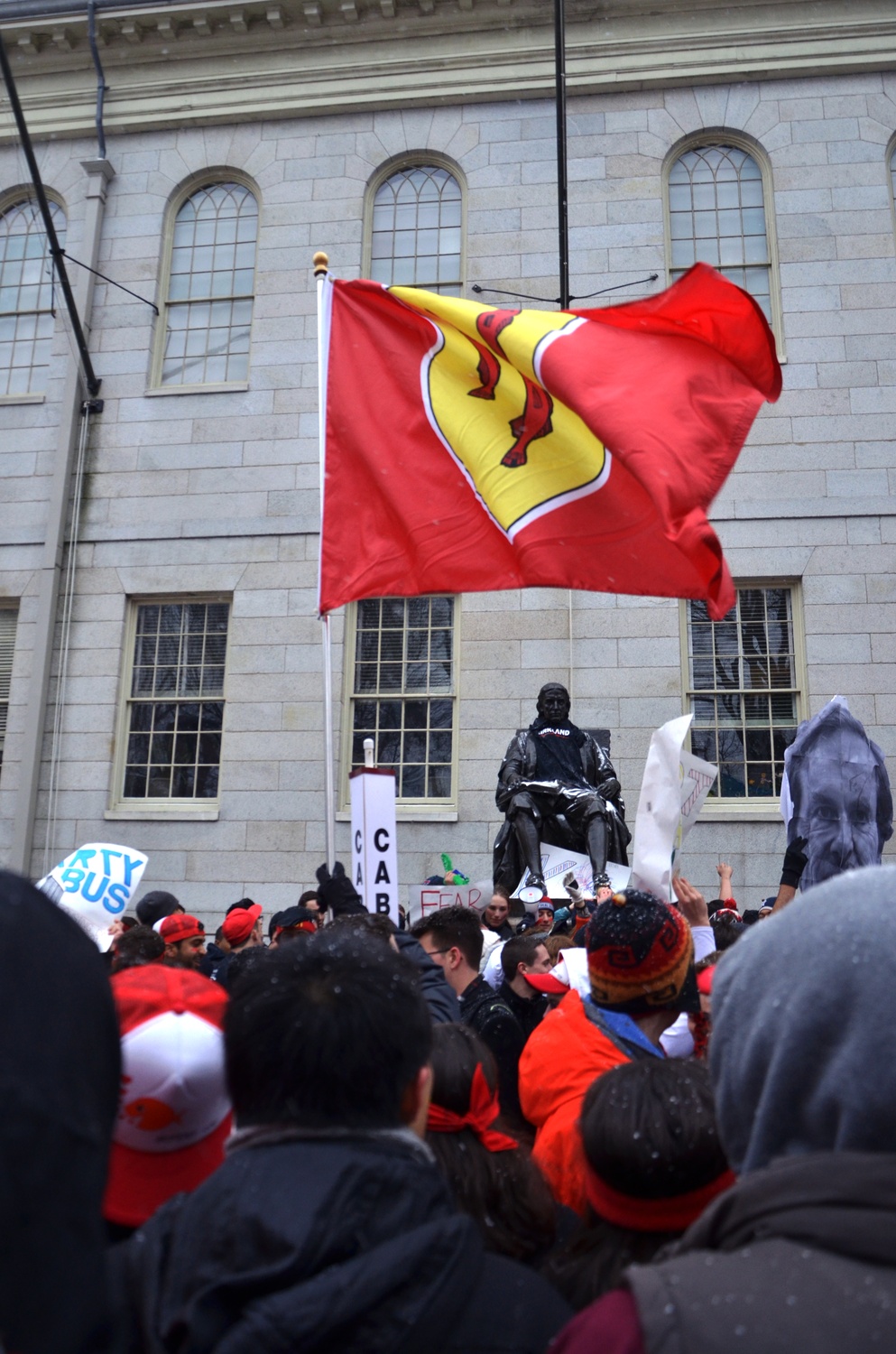 All of a sudden, hordes of students sprinted away in various directions. I followed the bobbing crowd of red and yellow as it streamed into Holworthy. There were so many of us that I couldn’t shoulder my way to the front of the group and see the first blocking group’s reactions. As suddenly as it had started, we were sprinting off to another dorm.

Eventually splitting into two smaller groups, I was finally able to see some of the freshmen. It was better than I expected—the freshmen we took and showered with Swedish Fish wore at worst blank faces and at best smiles as they donned their Cabot tanks and sweatbands. Now, they weren’t yelling with joy, but they seemed at least mildly excited, something I took as a win. Only one room of freshmen, a larger blocking group of girls, cried that day when we arrived. While it was disappointing to see—after all, they had no idea what Cabot is actually like—we shook it off and moved on.

As we filed out of our last dorm back into the snow, the juniors and seniors chattered, celebrating that only one blocking group had cried this year. I had to admit, I was frustrated with those girls. They were totally ignorant about the Quad, I told myself. They would love it—or, at the very least, they would adjust.

It’s a shame how holistically the Harvard community buys into Quad-hating. My upperclassmen River friends were the first to tell me that they felt bad for me upon hearing my housing assignment and how transferring was always an option. Even now, I find myself modifying my statements, minimizing my love of my House.

Instead of telling people about our welcoming community, about seeing my House Masters at the Donkey Show, about the convenience of shuttles every 10 minutes (especially the ones that go straight to Northwest Labs), about n+1 housing, and about having actual grass at my doorstep, I qualify, understate, mitigate. “It’s not that bad,” I find myself saying to my friends, “it grows on you.”

Why isn’t Cabot, or the Quad in general, something to be excited about? Why do people laugh when I say I have House pride? Arguments in favor of the Quad seem forced, tired and quickly dismissed by the more proximate majority. “But, River,” they say. “Location.” “Lunch.”

To those people I want to say: But natural sunlight. But n+1. But Cabot Café. But Dean Rakesh.

As our beloved House Master once said: No Cabot, No America.

Welcome to the family, new fish. 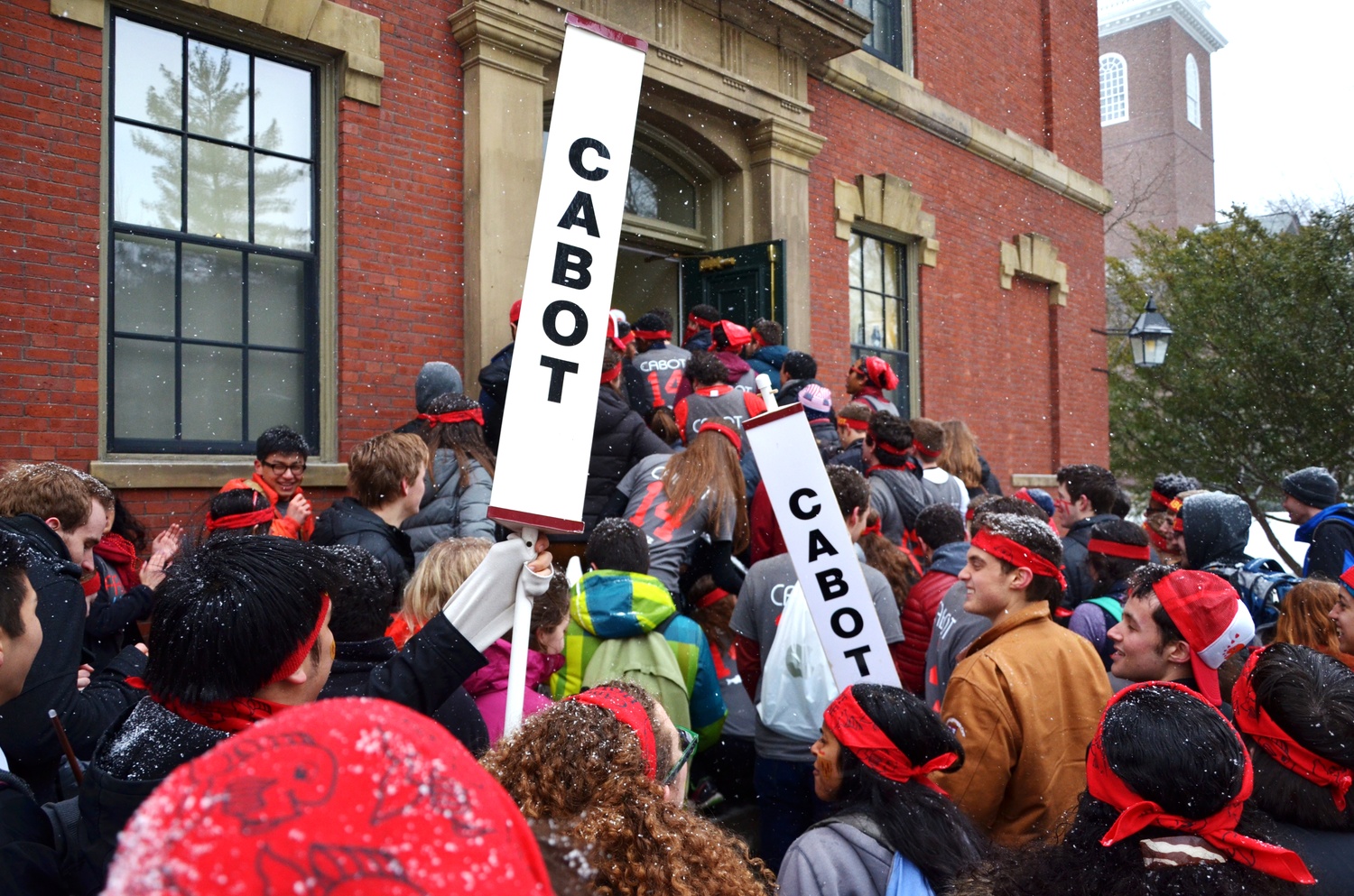