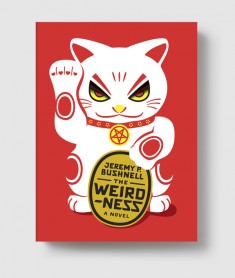 There are a few things that everyone, regardless of creed, thinks to be evil, and near the top of this short list is PowerPoint. So it is no surprise that, when Lucifer Morningstar—otherwise known as Satan—appears in struggling writer Billy Ridgeway’s living room, the Devil’s proposition is presented in slideshow format. In Jeremy P. Bushnell’s debut novel, “The Weirdness,” not even the Devil is exempt from the trashiness of modern living—and its concomitant humor and angst.

Billy Ridgeway—New Yorker, college dropout, and sandwich-shop employee—has a life that is falling apart. His handful of published short stories have failed to vault him from the obscurity of the sandwich shop’s kitchen, and his art-film director girlfriend, Denver, may have broken up with him; in an all-too-typical twist of modern relationships, he has not heard from her for several days and their status is unclear. As a result, the appearance of the Devil is in some ways a pick-me-up for Billy, although the contents of his PowerPoint presentation are disturbing: a centuries-old warlock in Manhattan, Timothy Ollard, has stolen from Hell a dangerous magical machine that threatens to engulf the universe in fire. The Devil, who would prefer to keep the world around so that there are more souls for him to ensnare, has as a result come to Billy with the seemingly impossible task of capturing the item.

Bushnell’s wildly imaginative plot could have easily come to an ill end in the hands of an author with a heavier touch. Happily, he treats it as a joyful caper rather than an unsuccessful effort at tragicomic meaningfulness. Much of the humor arises from Bushnell’s command of modern trite vocabulary and sloppy grammar and his masterful use of it in dialogue. When asked about his relationship with Denver by his best friend and fellow sandwich-maker, Anil, Billy replies, “It’s just—things with Denver and I are really, uh, challenging right now.” The ridiculousness of these bumbling half-ironic idiolects is brought to the fore by its contrast with Lucifer’s own precocious-child vocabulary and style:  “‘Yeesh,’ Billy says. ‘Don’t be too impressed,’ Lucifer says. ‘The edifice you see is mostly illusory.’ ‘What even…,’ Billy says. ‘What part of the planet is this on?’”

In addition to his effective mimicry of the language of modernity, Bushnell has an acute sense of the chaos and junk that occupy the space and time of every denizen of the 21st century. When Billy wakes to answer his phone, he is undone by his mess. “His limbs jerk uncoordinatedly. He flings an arm onto the bedside table, where it crashes onto the edge of a saucer covered in coins, flipping it into the air. Pennies rain down onto him.... The phone’s not there. It’s on the floor. Each time it rings it scurries further [sic] away from the bed.” His first meeting with Satan is similarly surrounded by mess: “[The Devil] produces a business card, seemingly from nowhere, and places it carefully on the coffee table, among the messy piles of CDs, drug paraphernalia, and magazines.”

More than anything, however, it is Bushnell’s deep awareness of comedic conjunction and sheer quirkiness that gives “The Weirdness” its charm. A prime example is from Billy’s second meeting with the Devil, when they decide to get high together. “‘You want a pull on this?’ [Billy] says, proffering the bowl to Lucifer. ‘Normally I wouldn’t,’ Lucifer says, ‘being here, as I am, on business. But—how did you put it? Why the fuck not? I admire this as a basis for decision-making. You have inspired me to follow your lead.’ ‘Mr. Reasonable,’ Billy says, watching as Lucifer takes his own draw. ‘C’est moi,’ says Lucifer, after a long exhale.’”

One might make the criticism that “The Weirdness” never transcends low burlesque. The themes of eternal punishment, the destruction of the world, and moral agency are not engaged with any seriousness or philosophical sophistication. This, however, is a matter of taste. Bushnell seeks to amuse, not to probe the wounds of human existence, and he does so with great efficacy. There is no point to Satan’s drug use or love of PowerPoint besides humor—and why should there be? There is no reason that humor is not just as worthy an inherent aesthetic end as thematic depth. Life is as funny as it is sad. Literature should be, too.

Ultimately, “The Weirdness” is a novel that succeeds within its parameters, and it succeeds brilliantly. Bushnell has not written a work of great profundity, but he has fulfilled the greatest and perhaps most commonly neglected task of the fiction writer: he has written a work that is immensely entertaining, and more than being merely diverting, is truly funny.