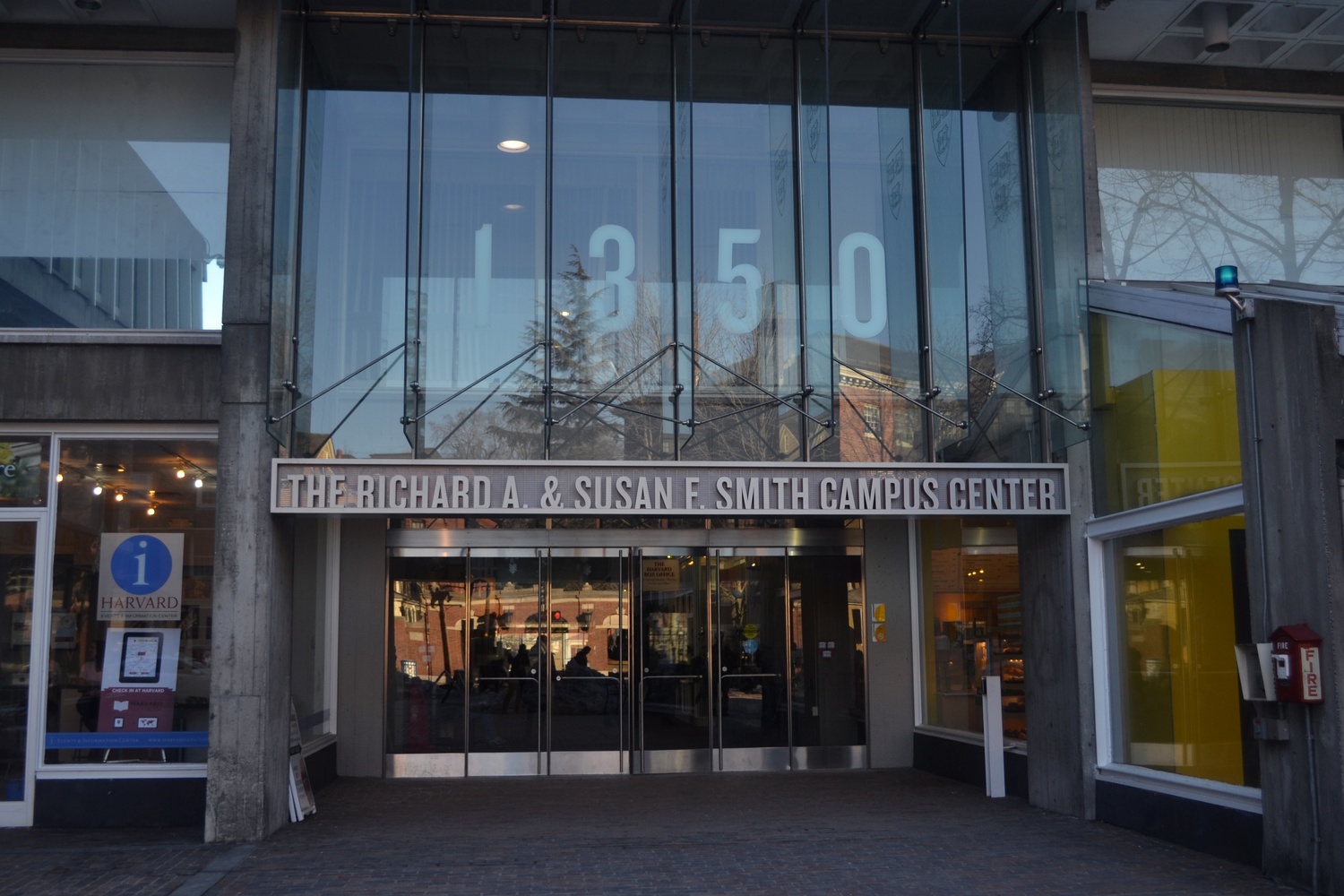 Two College working groups have made recommendations for the future of the Richard A. and Susan F. Smith Campus Center, among them that the space include food options and meeting spaces. By Nathalie R. Miraval
By Madeline R. Conway and Steven S. Lee, Crimson Staff Writers

Two working groups tasked with determining College priorities for the future of the Richard A. and Susan F. Smith Campus Center have recommended that the renovated space include food options, a venue for large events, and designated space for tourists, among other broad points.

Both working groups—one composed of undergraduates and the other of administrators and House masters—have ceased meeting after convening several times over the winter, both separately and jointly, to discuss the campus center and how it could benefit the College.

The renovated Smith Center, expected to undergo construction starting in 2016 and open in 2018, will be housed in the first three floors of what was previously named the Holyoke Center. Harvard Magazine has reported that the project is expected to cost $80 million.

The two College working groups were among a number of other committees convened to solicit ideas for the project from across the University, according to Paul Andrew, acting University vice president for communications. Administrators have emphasized that the space is not a student center or student union, but rather a space for individuals from across schools, including faculty and staff.

According to Dean of Freshmen Thomas A. Dingman ’67, who co-chaired the working group for College administrators with Leverett House Co-Master Howard M. Georgi ’68, the two College groups submitted joint recommendations to central administrators in recent weeks.

“There’s a lot of brainstorming, really, that was happening, to say, what are some things that would be really interesting to see as part of the campus center, [and] throw in the mix so that [Harvard Planning and Project Management] and the folks that are managing this project can look for synergies across the University,” said Associate Dean of Student Life David R. Friedrich, who co-chaired the undergraduate working group. 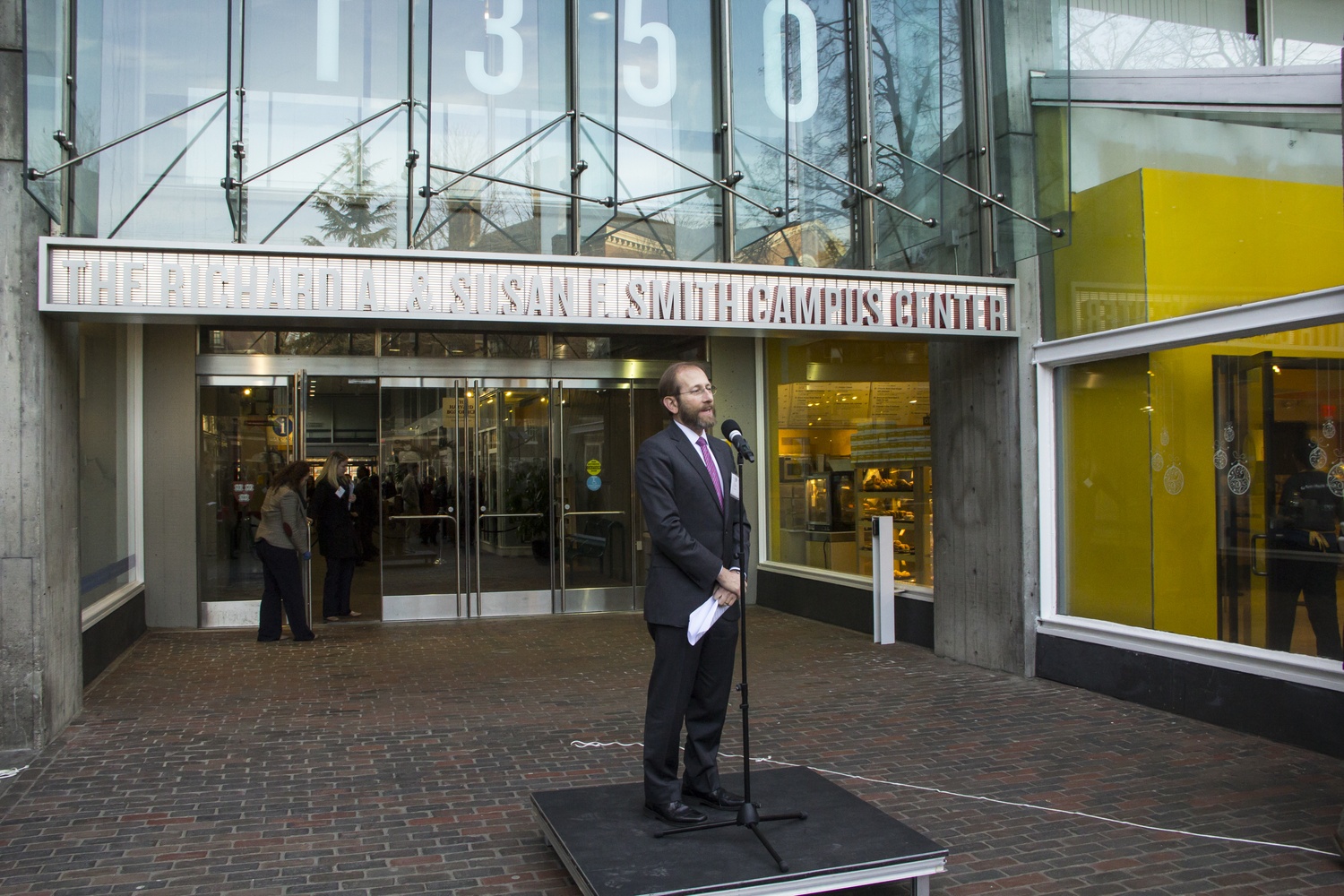 University Provost Alan M. Garber ’76 announces the renaming of the Holyoke Center in November. The first three stories of the building will be transformed into a new campus center expected to open by 2018. By Zorigoo Tugsbayar
Advertisement

Friedrich said members of the student working group suggested that the Smith Center should include “as many student services as possible,” comfortable meeting space, and the Harvard Box Office, among other recommendations. Friedrich called food “probably the hottest topic” of the discussion.

Several members of the College working groups suggested that a challenge in creating the campus center will be to best serve undergraduates in a central, accessible location without taking away from House community.

Dingman said that offering food in the campus center, for example, might draw Quad students away from their House dining halls at lunch.

Undergraduate Council President Gus A. Mayopoulos '15, who was involved with the student group, suggested that administrators could learn from Cambridge Queen’s Head Pub, which he noted is frequented by graduate students but was originally designed for undergraduates.

“That space has sort of fallen off the undergraduate radar,” Mayopoulos said. “I think it’s important for the architects and for the designers of the Smith Campus Center to realize that undergraduates can be easily spooked by or intimated by feeling like they aren’t welcome in a space because it isn’t designed for them.”

Dingman also pointed to the Pub as an example of space rarely used by the undergraduate population, saying one way to prevent this from happening at the campus center is to weave existing community activities and programming into the plan for the Smith Center.

“This is not a student center; this is a campus center,” Dingman said. “Faculty, staff, alums, graduate students, upperclassmen, freshmen are all imagined as part of the eligible group to be in the space. I don’t know whether freshmen would say that mix creates the allure they have in mind.” Dingman was referencing some freshmen’s desire for their own space.

Administrators hope to begin reviewing the feedback on the project this spring “to identify common themes and opportunities that would support the vision of a campus center that truly serves the entire Harvard community, while complementing existing facilities,” Andrew wrote in an email. Beyond the working groups, administrators have solicited feedback on the project through a University-wide online survey and focus groups. Andrew added that administrators would later “communicate important findings” to faculty members, students, and staff.

A different group convened Thursday for a meeting about the campus center and discussed the campus-wide survey, according to Dean of Student Life Stephen Lassonde, who co-chaired the undergraduate working group with Friedrich.