As Boston Looks Back, Harvard Pauses for Day of Remembrance 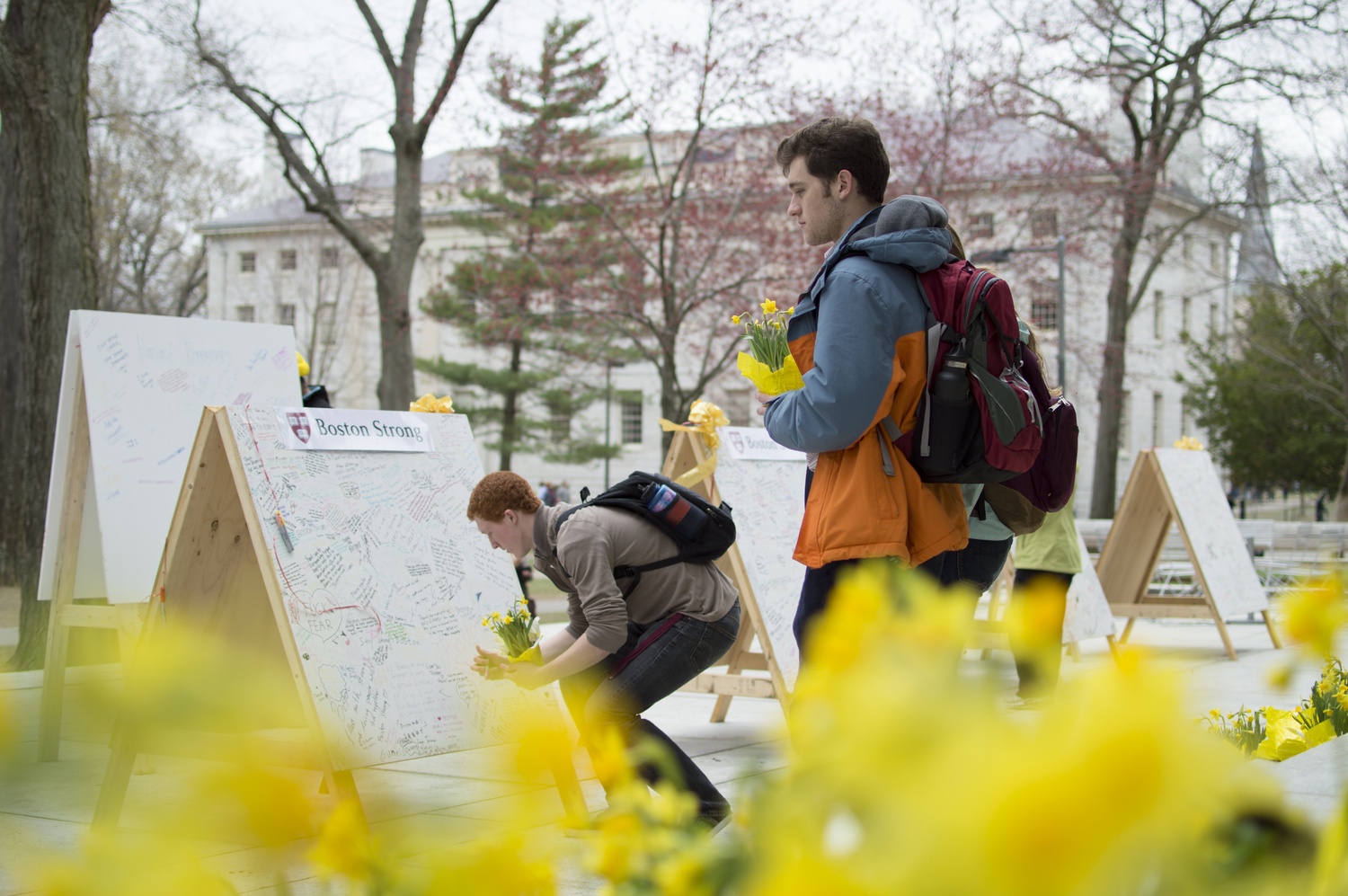 Members of the Harvard community add to the remembrance walls outside of Memorial Church on Tuesday afternoon. By Y. Kit Wu
By Meg P. Bernhard and Matthew Q. Clarida, Crimson Staff Writers

As hundreds came together across Boston on Tuesday to mark the one-year anniversary of the bombings at the 2013 Boston Marathon, members of the Harvard community had a quieter day of reflection and remembrance in and around Harvard Yard.

Throughout the day, students braved wind and rain to write on message boards posted in the Science Center Plaza and by Memorial Church. Many of the messages were addressed to first responders and law enforcement officials—from the Harvard University Police Department and other local units—that played a central role in the aftermath of the bombing and in the manhunt that ensued three days later.

“I cannot thank you enough,” read one message addressed to the Boston Police Department and the Harvard University Police Department. “[I] love this community and [am] so proud to be both a native New Yorker and adopted Bostonian. Boston Strong.”

Another message read: “Thank you to all who stood by us in our direst hour of need. We salute you all on behalf of the campus, the greater city of Boston, and the world.”

In the afternoon, Memorial Church hosted nearly 100 people in a service of silent reflection. The hourlong service culminated at 2:49 p.m.—the time of the explosions—with a tolling of the church’s bells, sounded in sync with bells across the Boston metropolitan area. Throughout the hour, community members either sat in silence or chatted softly with others in their pews. Some wore official Boston Marathon apparel, and many carried daffodils that were distributed Tuesday at Memorial Church and the Science Center Plaza.

“It was comforting to know that I would be able to have a more formal space and time to process and reflect on last year with the 2 p.m. event at Memorial Church,” Ginny C. Fahs ’14, a Crimson magazine editor, wrote in an email on Tuesday afternoon. Fahs attended the reflection service and will run the marathon next Monday for the second consecutive year. “My brain made so many lasting memories that day, and the anniversary has brought these images and memories flooding back.”

The reflection period in Memorial Church was a chance for community members, many of whom are preparing to return to the marathon next week, to remember the victims of last year’s explosions. 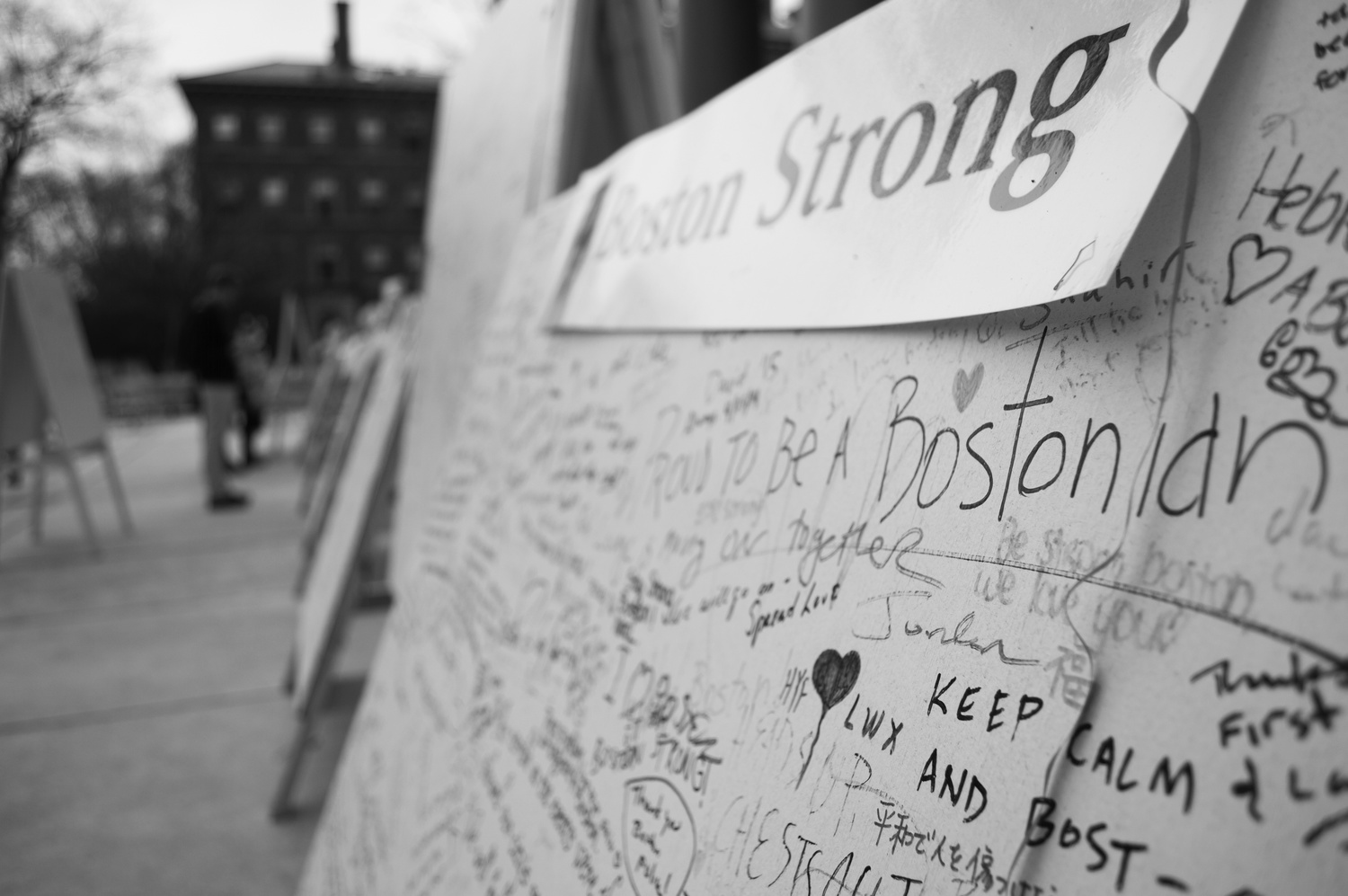 Handwritten messages line the remembrance walls brought out for the anniversary of the Boston Marathon Bombings. By Y. Kit Wu

Krystle M. Campbell, a former Business School employee, was among three killed in the explosions last April. She had been waiting at the Boylston Street finish line to watch a friend complete the race when the first of the two explosions detonated.

Campbell, who was 29 and had been working weekends at the Business School’s Spangler Grille while attending the University of Massachusetts-Boston, is survived by her parents, Patricia and William Campbell Jr., and her brother William Campbell III. Both Krystle Campbell’s mother and brother have worked for the University—her mother with Business School Restaurant Services and her brother with Cabot House dining services.

In the year since her death, members of the Boston community have honored her memory by contributing to her memorial fund, established by the Boston Foundation, which pays for scholarships at Campbell’s high school, Medford High School, and supports the Angell Animal Medical Center and organizations that help autistic children. Seventeen runners will race next week in honor of Campbell to raise awareness for this fund, including a group from the Business School.

In addition, a trustee at the University of Massachusetts Boston set up a scholarship in memory of Campbell. The City of Medford, Campbell’s hometown, recently announced a $1 million project to build a peace garden honoring the lives of Campbell and other victims.

“One year later, our entire family continues to grieve for the loss of our wonderful, smiling, and vivacious daughter, Krystle Marie Campbell,” Campbell’s parents read in a statement addressed to the Boston community last Friday. “There is not a day that passes without our thinking of our daughter.”

Tuesday was a day of ceremonies across the Boston metropolitan area. In the morning, wreaths were placed at the two explosion sites at Boylston Street. Later in the day, Vice President Joe Biden headlined a roster of dignitaries in attendance at a tribute held at Hynes Convention Center.

“You are living proof that America can never, never, never be defeated,” Biden said, addressing the families of those killed in the blast and its aftermath. “You’re here. You’re undeterred, and you’re unyielding.”

In addition to Campbell, 8-year-old Martin Richard of Dorchester and Lu Lingzi, a 23-year-old student at Boston University, were killed in the blasts. MIT Police officer Sean A. Collier was shot by Dzhokhar and Tamerlan Tsarnaev before the brothers fled authorities on the Thursday and Friday after the bombing.

After the tribute, a moment of silence was held at the finish line on Boylston Street. Next Monday, more than 30,000 runners are scheduled to cross that line before a projected one million spectators.