This is the first in a weeklong series of articles chronicling Harvard’s remembrance of the Boston Marathon Bombings that occured a year ago.

For the Harvard affiliates running in last year’s Boston Marathon, it was a picture-perfect mid-April morning and a pleasant, if difficult, run through Boston’s suburbs.

“It was a beautiful day, and it was a great run,” Patrick Rooney ’14 remembered in an interview last week. “It was just a really incredible run. And I think people forget that, for good reason, but it was a really beautiful day.”

Rooney was one of dozens of affiliates who had crossed into Boston to take part in one of the area’s most treasured spring traditions. Many ran, and countless others watched and cheered along the 26.2 mile course from Hopkinton to Back Bay’s Copley Square.

And then, shortly before 2:50 p.m., just yards from the Boylston St. finish line, two homemade explosive devices detonated within seconds of each other, injuring hundreds on the spot and eventually killing three.

Rooney, who was just blocks away from the finish when the bombs went off, said that he didn’t know what was happening at first. Neither did those across the river, rushing through their end-of-term Monday schedules, who heard the news in fragmented spurts of short breaking reports and social media postings.

“[It was] kind of an earthquake feeling, turning around and seeing the first one,” Rooney said. “And then the second one happened a few seconds later.... It was a very localized thing around those two blasts. I think people that were at the finish line and people that were maybe a block away...could see everything, could hear everything.”

But further up the course, those who were still running—many without cell phones or any communication devices—remained in the dark. Sara R. Siskind ’14, a Crimson editorial editor, had entered the race unofficially a few miles in to help pace a friend.

“This race official or policeman, I don’t remember, stopped me,” Siskind said in an interview last week. “I just remember thinking, ‘You don’t know. I’m running the Boston Marathon. You don’t just tell me to stop.’”

But the runners had to stop. With hundreds injured on Boylston street, with the finish line cluttered with debris and medical personnel, the race could not go on. The unfinished race left thousands of runners on the course with spectators and relatives wondering if their friends and loved ones were safe or not. 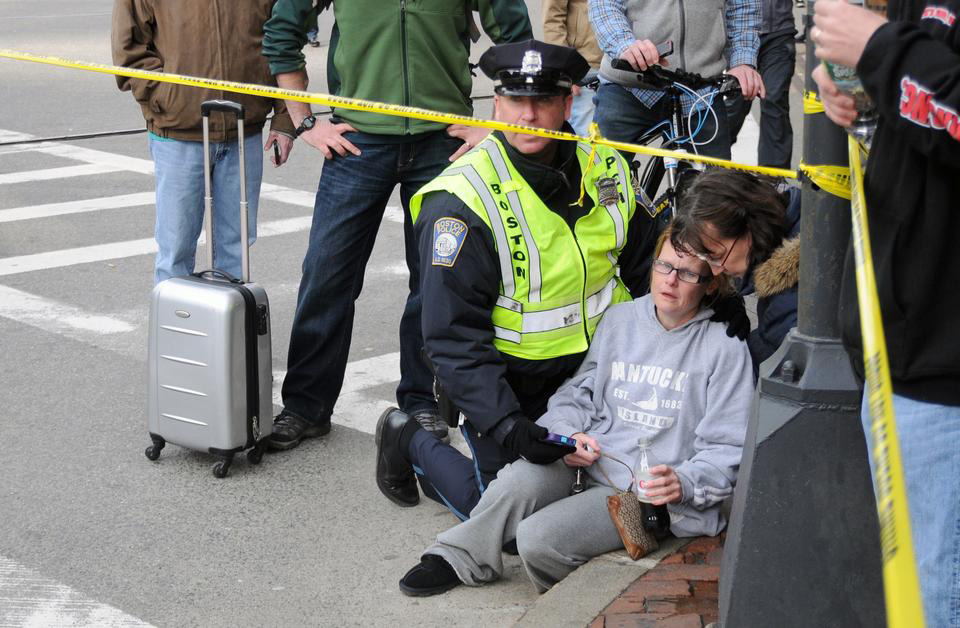 Unbelievable - A Boston Police Department officer comforts a shocked onlooker of the bombings in Copley Square. 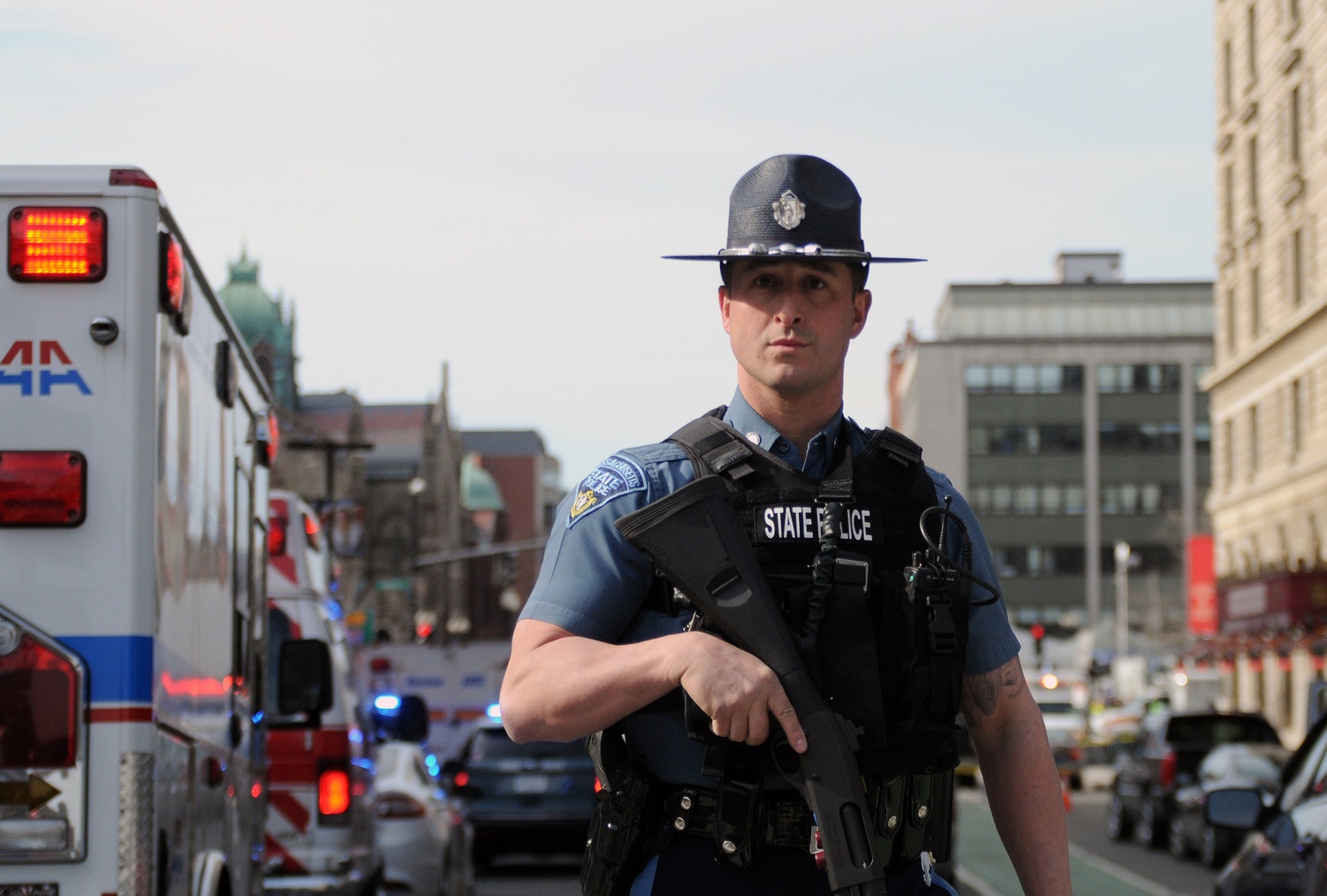 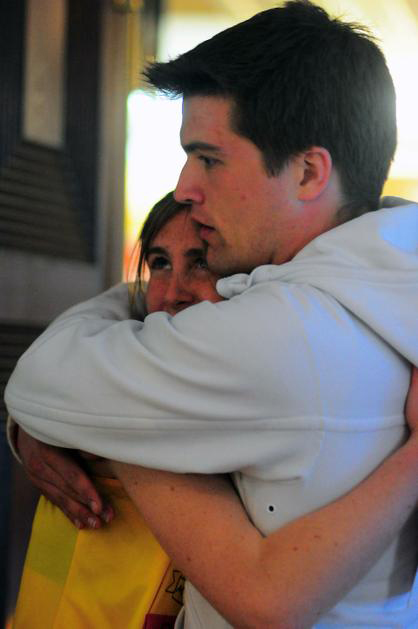 Hugs - Ginny C. Fahs ‘14 and Mark R. Jahnke ‘13 embrace at a reception held for the Harvard College Marathon Challenge participants in Quincy Junior Common Room on Monday evening. Both runners, who walked back to Harvard’s campus, had made it past the 26-mile mark when authorities closed the route due to detonation of two bombs at the finish line. 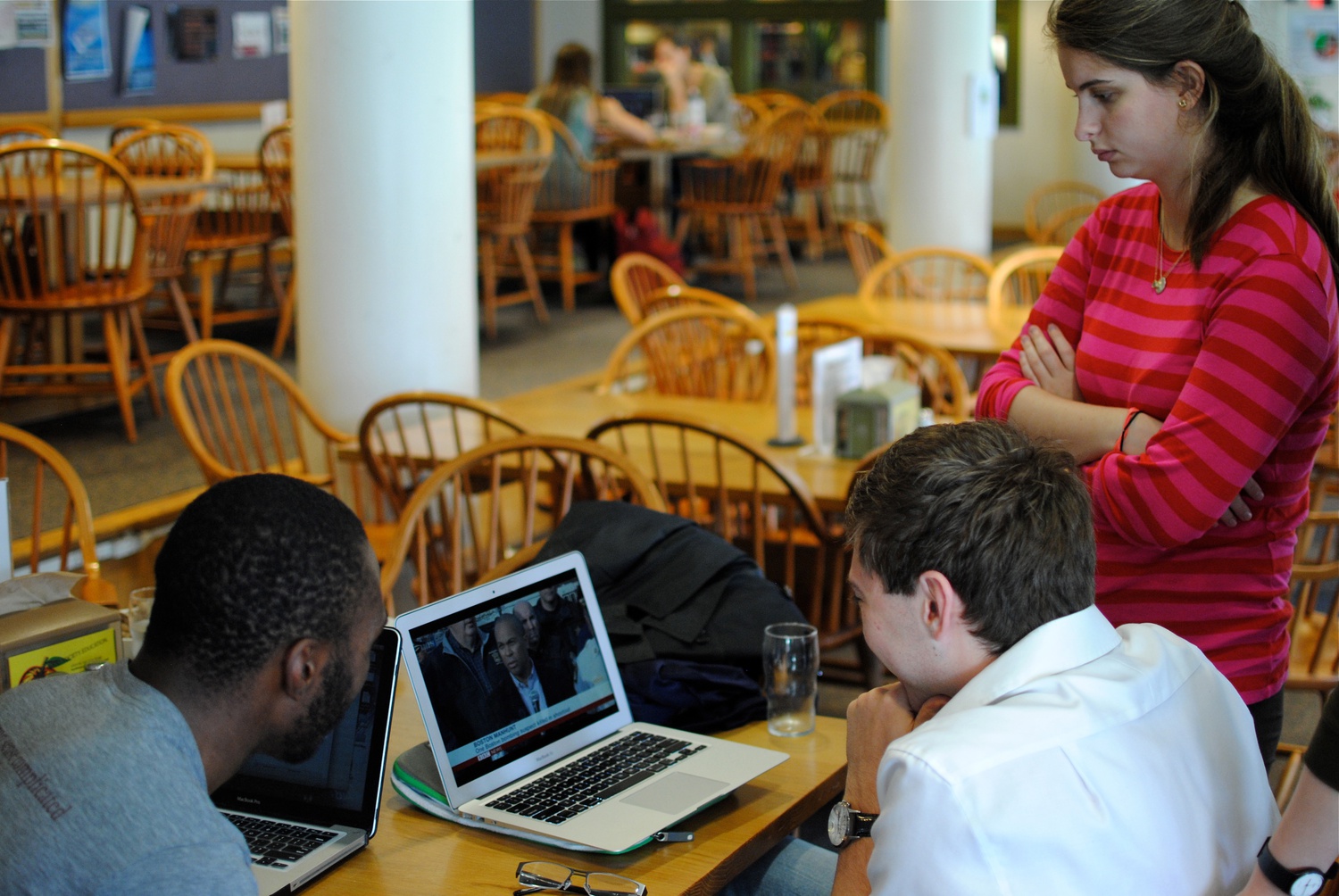 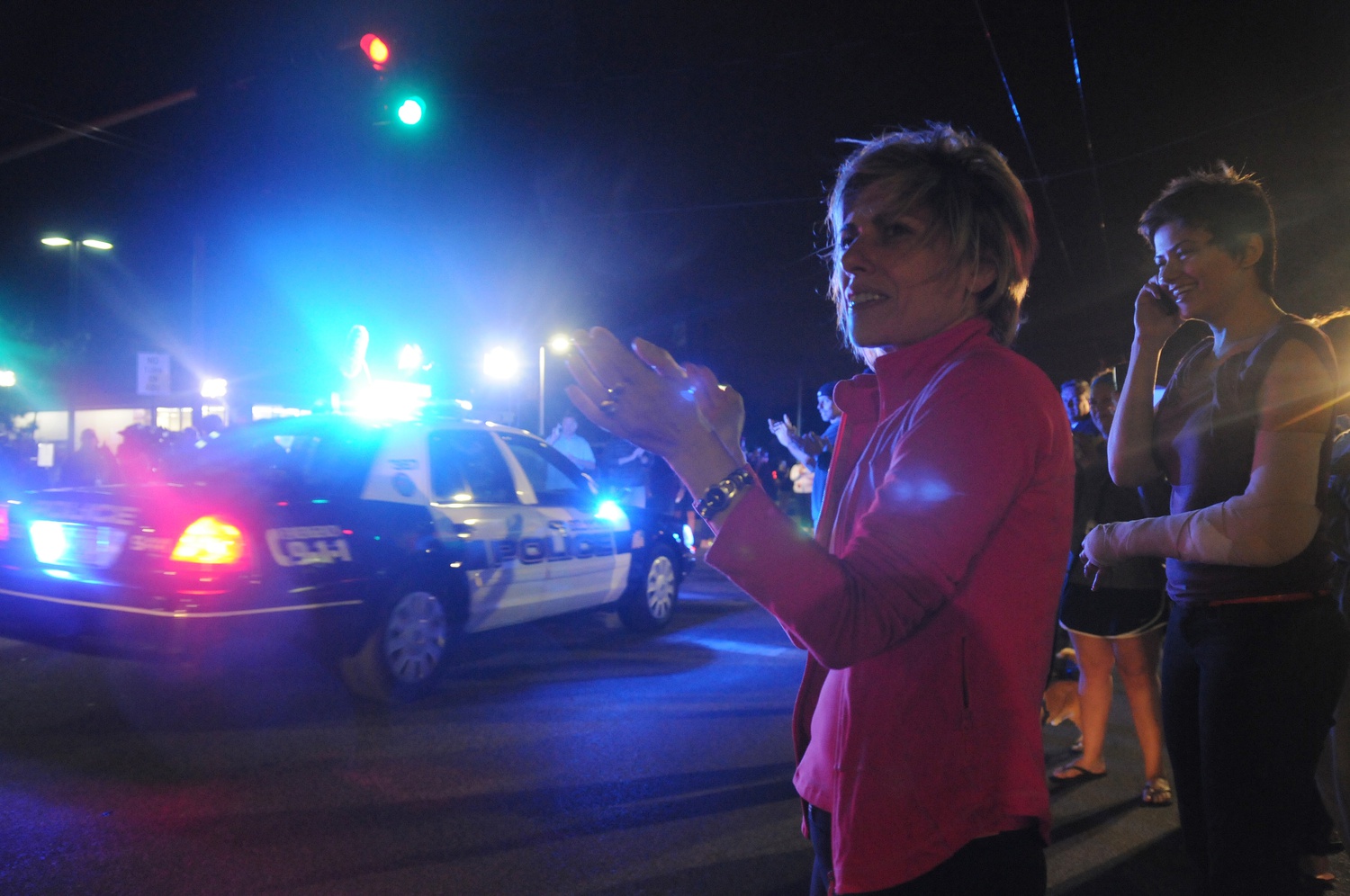 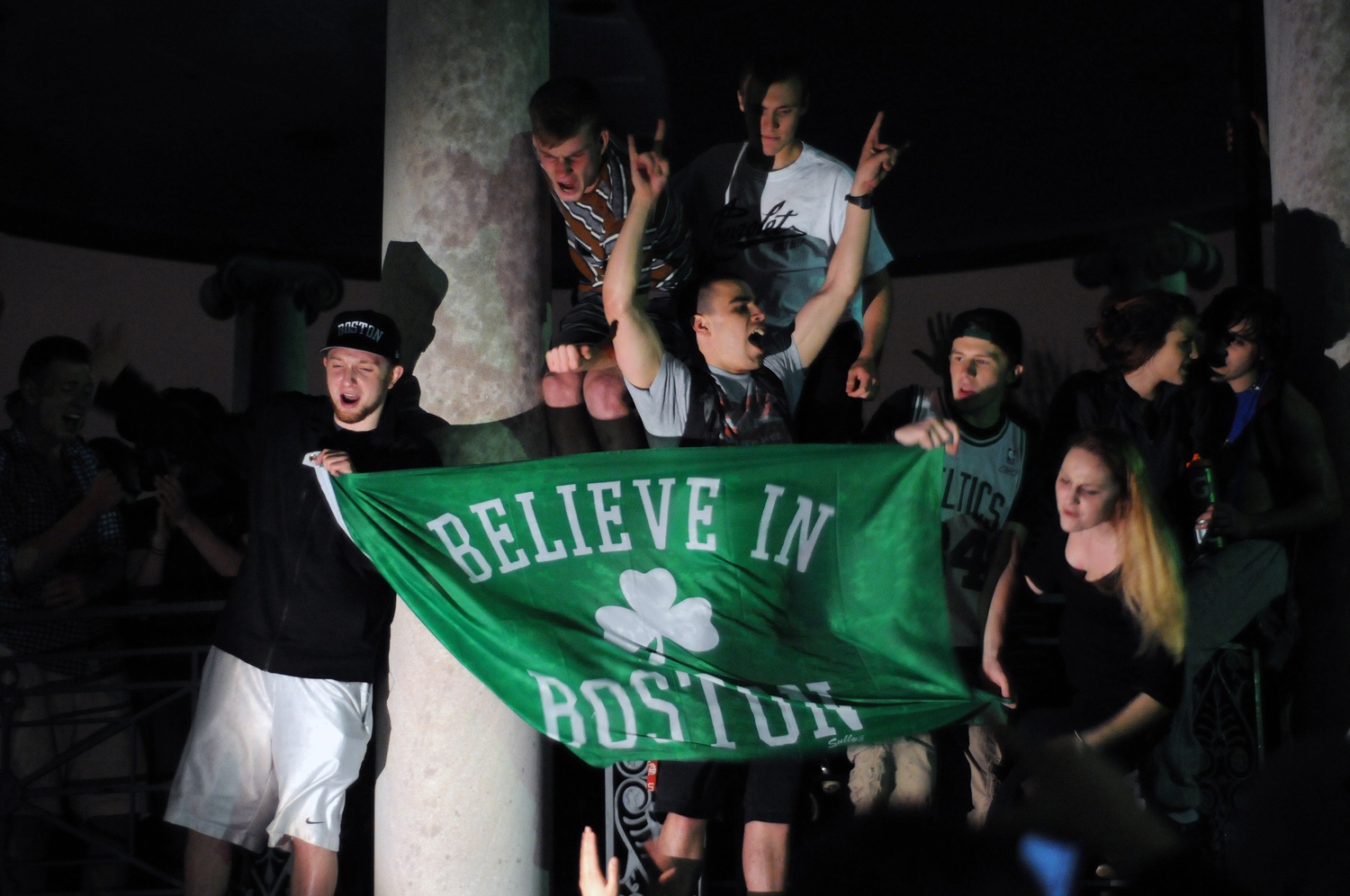 Eventually, all of the Harvard affiliates who ran the race made it back to a campus which had experienced dozens of unfounded bomb scares and a partial evacuation of the John F. Kennedy School of Government .

Krystle Campbell, a former Business School employee whose brother and mother have also worked at the University, suffered critical injuries in the blasts. Campbell succumbed to her injuries soon thereafter, and was among three who lost their lives in the bombings.

James Costello, a mail services employee at Harvard, survived the attack but was photographed walking away from the bomb site with singed skin and charred clothing.

Back on campus, Harvard’s runners and spectators were met by students who had experienced the day from a distance.

“It was hard to go back into Annenberg for the first time and see so many people in such a small space...like nothing had changed,” Elizabeth A. Melampy '16 said last week. “And for me so much had changed. So just to have that...atmosphere was really, really hard.”

Rooney remembered the news hitting him after he returned to campus.

“At that point it was really sinking in that this was something that was going to be very tragic, very sad, a real test to the community,” he said. “I just wanted normalcy.... I just remember feeling like ‘I don’t want to be in Boston right now.’”

In the days that followed, the investigation into the bombings would bring the conflict even closer to home. On Thursday, two days after the explosions, the FBI released images of the alleged perpetrators, later identified as Cambridge residents Tamerlan and Dzhokhar A. Tsarnaev. As Harvard mourned its lost and injured, the Tsarnaev brothers rampaged through Cambridge, Allston, and Watertown on Thursday night and Friday morning, killing MIT Police officer Sean Collier and eventually drawing police into a shootout. The manhunt, which put much of greater Boston and Harvard on lockdown, ended with Dzhokhar Tsarnaev’s capture Friday evening in Watertown.

Now, a year later, scores of Harvard student and affiliates are poised to return to the finish line on Boylston Street.

“What makes me so happy is a lot of students, I hear, are going this year,” said Kerry M. Flynn ’14, a Crimson news editor, who watched the race from the sidelines last year. “You’re going to miss one day of class, it’s okay. It’s so much more important to go out and cheer on some friends and just be a part of a memorable day in your life.”

Melampy, who last year never made it to finish, said that she relishes the opportunity to have another chance at the famed course.

“There are so many people that want to run this race and to be able to do it again is really awesome,” she said. “I’m really just excited to spend time on the course. I’m slow, I’m not going to win.... I’m just going to take my time on this course with all these beautiful people and I’m really, really excited to get to do that.”

The 118th running of the Marathon is set for next Monday, and according to race chairman Dave McGillivray, 36,000 runners—9,000 more than last year—have entered the race.

The Harvard College Marathon Challenge, a running group which sent around 20 runners to last year’s race on non-profit exemptions—the other, more popular, way to run the Marathon is to earn a spot by running a certain time at a qualifying event—will send a group of similar size to this year’s race, according to HCMC chair Craig Rodgers.

More will run in honor of friends and family who never finished a year ago, remembering the long shadow cast on a picture-perfect day in April.

An earlier version of this article incorrectly stated the number of times the Boston Marathon has been run. In fact, this year will be the 118th running of the marathon.