For Homeless Youth, Age Can Compound Challenges of Life on the Streets 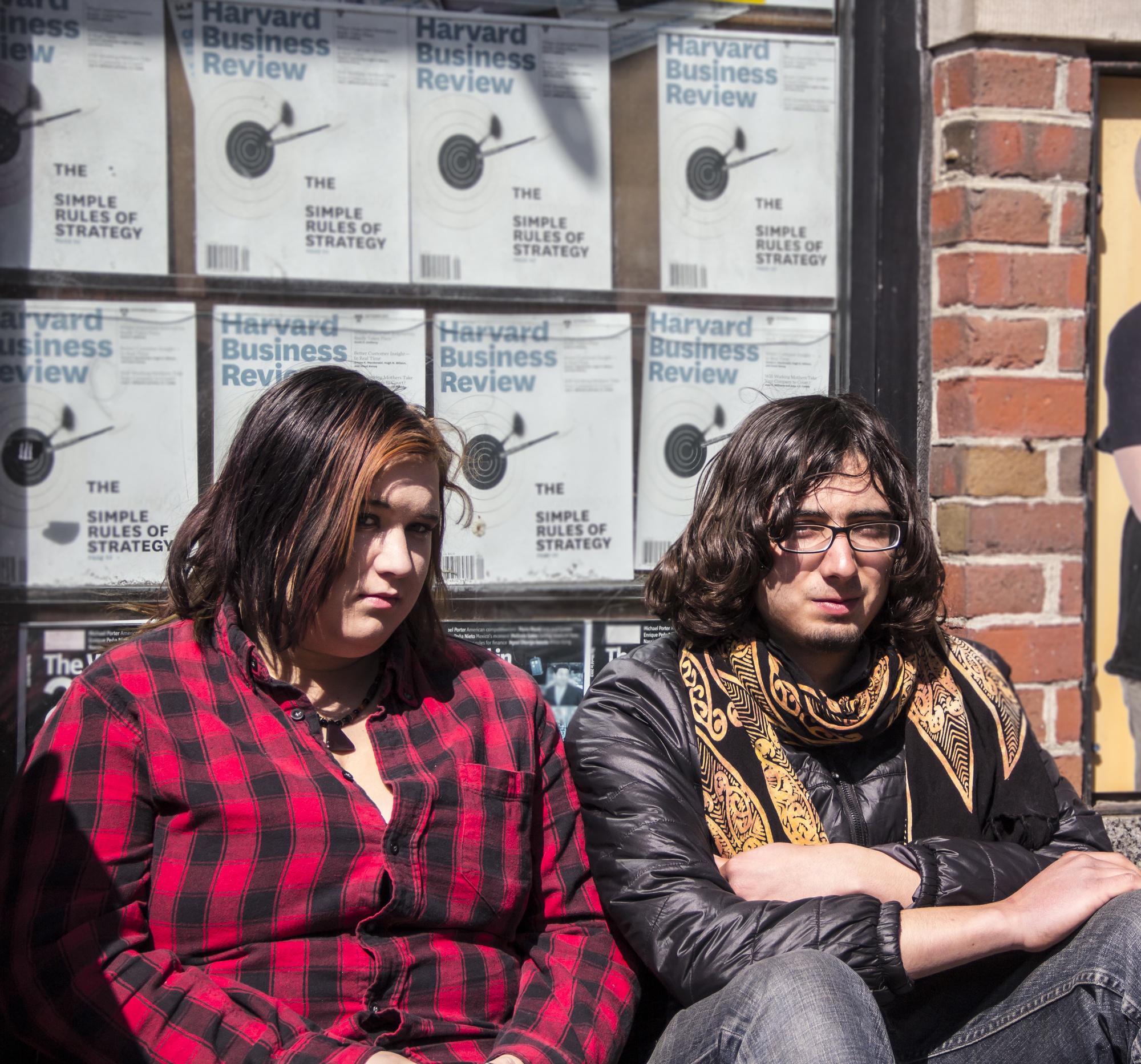 This is the fourth article in an occasional semester-long series on homelessness in Harvard Square. Read earlier installments here, here, and here.

Wrapped in a gray blanket on a rainy Friday afternoon in early April, Jade Hosie, 22, panhandles outside of a Harvard Square CVS on Garden St. Hosie ended up homeless almost two years ago when she and her mother lost their house in Buffalo, N.Y. after her mother fell ill. 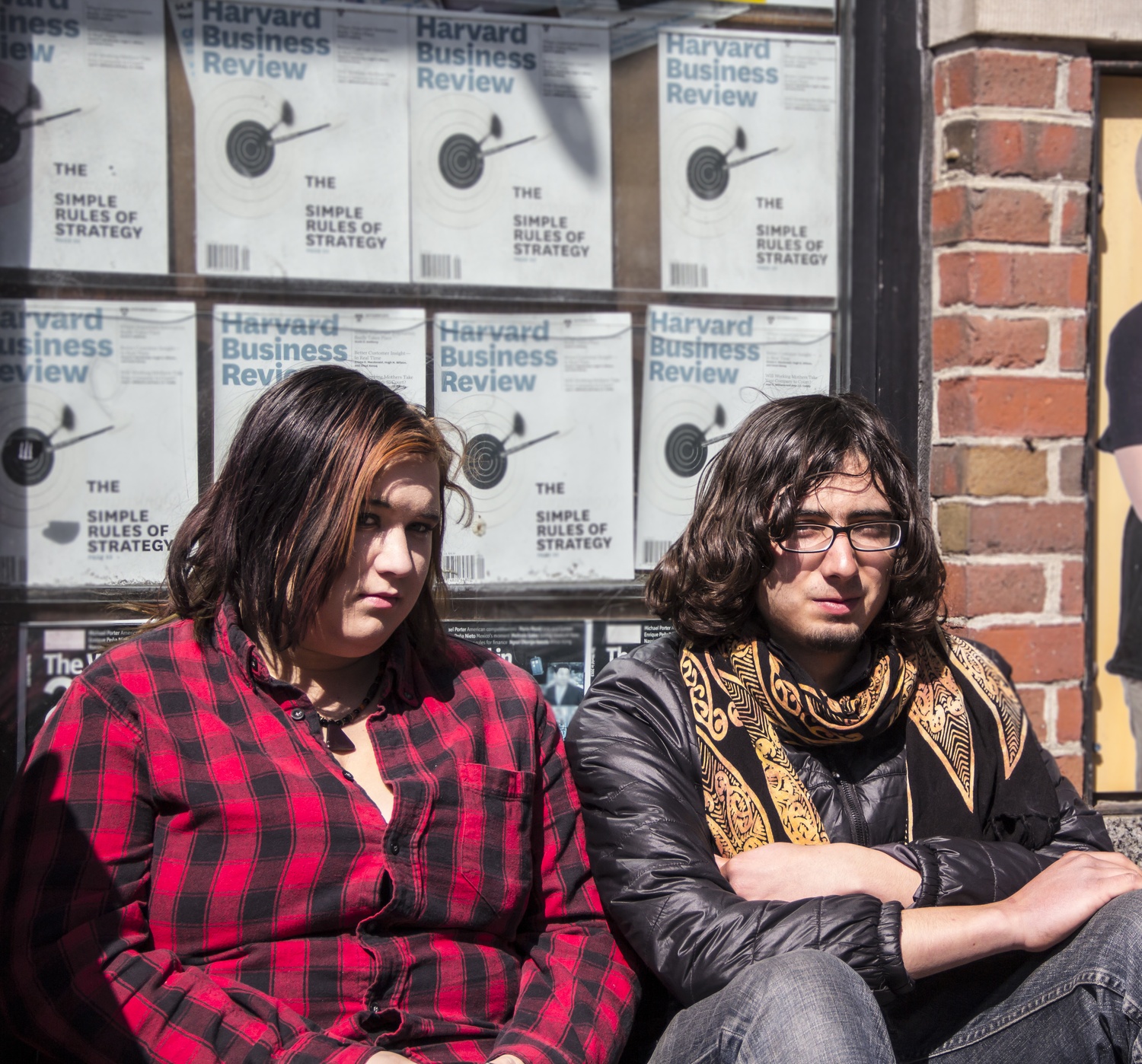 Two days later, Harley, 19, is occupying the same space outside of CVS. A self-described “gypsy,” she says that Cambridge is just the latest stop on her two-year journey from Philadelphia up the Eastern seaboard.

A week later, as the weather starts warming up, Mike Olson, a San Francisco native who finds himself on the streets in Cambridge; Max, a homeless youth who is struggling to obtain treatment for a neurological disorder; and Alex Sanchez, who lives with her boyfriend in Cambridge but who enjoys the company in the Square, are smoking in the Pit.

These five stories suggest both the variety of life experiences of the homeless youth population that lives in and around Harvard Square and the challenges facing those who hope to aid this often overlooked subgroup within the larger homeless population.

As Dr. Ralph Vetters ’85 of the Sidney Borum Jr. Health Center points out, no matter how these young adults between the ages of 18 and 24 lose their homes, they are more likely than adults to become victims of sexual or other physical violence when out on the streets, while also facing many of the same basic challenges of homeless life.

But those who work with homeless youths say that despite their vulnerability, this group has the best chance of avoiding chronic homelessness and, as such, deserves greater attention and investment of resources than has previously been offered.

THE THREAT OF ASSAULT

In addition to the problems of exposure and hunger that all of Harvard Square’s homeless face on a daily basis, young people entering the streets face an added risk—they are often preyed upon by adults seeking money or sex.

As a single woman on the streets, Hosie says that several men have tried to take advantage of her situation, soliciting her for prostitution. “They know you’re desperate,” she says, adding that she has been able to fend them off.

“I’m not really afraid of anything,” she says. “As long as I’m not in a vulnerable situation like sleeping or something, I’m pretty good.”

Still, she recalls a time when she was almost raped while sleeping in the Harvard Square T stop. “I woke up with a guy in my sleeping bag next to me. He tried to kiss me. He tried to get on top of me, and I pushed him off. I grabbed my stuff and ran away,” she recounts.

Hosie’s experience is not unique. According to the 2013 Street Outreach Data Collection Report, a federally-funded study on homeless and runaway young people, about 17 percent of Boston-area homeless youth have been sexually assaulted or raped at some point. It is estimated that another 29.8 percent have suffered physical violence.

Hosie says she has experienced less harassment since she started panhandling with her fiance, who is also homeless.

According to Vetters, this is not unusual. Forming connections with other homeless youth, he says, is a matter of not just companionship but also protection. He describes the tendency of homeless youth to live in “street families,” small groups whose members look out for one another.

Even though there can be incidents of violence within certain street families, Vetters says, youth generally prefer living in groups rather than facing the dangers of living on their own.

The “street fam” community, Olson says, is something he values and wants to hold together.

“I don’t want to be alone,” he adds, as he sits with friends under the Out of Town News stand to take shelter from the rain.

BETWEEN RESIDENTS AND TRAVELERS

Unlike her other friends in the Square, Harley is only here temporarily.

Harley, who declined to give her last name, says her mother kicked her out of their Philadelphia home three years ago, and she—then 16—made her way to New York City. There, she says she met a group of travelers and eventually became their leader.

“In New York...they called me the ‘Gypsy Queen,’” she says, “because I ran with a band of gypsies that were all older than me, and I had their respect.”

For both of these populations, Vetters says, substance abuse is an issue, with marijuana and alcohol abuse prevalent among resident homeless and heroin abuse more common among travelers.

Both groups also have higher rates of mental illness than the general population, he adds, and some psychological trauma stems from experiences with discrimination based on sexual orientation. Nationally, about 30 percent of homeless youth identify as LBGTQ, he says.

Meeting these medical needs can be difficult, Vetters says, because there is often a mutual misunderstanding between healthcare providers and the homeless youth they serve. The dangers of life on the street, he says, leave these young adults distrustful of new people—a baseline reaction that creates tension when youth interact with medical personnel in emergency care facilities.

“They’re not cosseted little kids who will say ‘Thank you, sir’ and appreciate everything that’s done for them in a simple way,” Vetters says. “They’ve had to fight for everything all the time and so their initial reaction is defensive, aggressive.”

In order to overcome these initial defensive reactions of homeless youth, service providers need to prove that they are a trustworthy and constant presence, says Elisabeth Ortiz Jackson, the executive director of Bridge Over Troubled Water--currently the only youth homeless shelter in the Boston area.

Jackson’s organization provides a comprehensive set of services for homeless young adults, including an emergency shelter, career and college counseling, a transitional housing program, and a daytime drop-in center that provides hot meals.

She says that Bridge over Troubled Water specifically targets youth because they are more likely to work their way out of homelessness than older peers. “They’re young,” she says. “They’re willing to learn. They want to learn.”

Sintayuh Atkins, 19, is one of the guests with a six-month bed in Bridge’s shelter. In addition to a warm place to stay and hot meals, Atkins receives counseling, case management, and college guidance at the site. The shelter requires guests like Atkins to have a job or take classes, as well as save 70 percent of their income.

Atkins left the Bridge program soon after starting it in Jan. 2013, only to return a few months later after a difficult time on his own.

“When we talk about the kids who go up and down...we are still here for them,” Jackson says. “We become their pseudo parents.”

For all the work that Bridge has done, there remains a shortage of services for homeless youth in the Boston area, those who work with the group say. Youth on Fire, one of the few daytime drop-in centers for young adults on the street, will downsize and relocate in June to Central Square due to funding shortages.

“This isn’t the be-all, end-all,” said Steve Keizer, Coordinator of the Emergency Youth Shelter at Bridge.  “There’s a lot we can be doing with more beds.”

Samuel G. Greenberg ’14 and Sarah A. Rosenkrantz ’14 aim to provide some of those beds. The pair is working to establish a new youth homeless shelter in Harvard Square whose services will be combined with those of Youth on Fire.

For Greenberg and Rosenkrantz, the issue of youth homelessness is particularly salient because they are “youth serving youth.”

Rosenkrantz said she feels particularly called to action by seeing homeless youth her own age in the Square. “That reality, that tangible connection to the problem, is what’s emotionally driving me,” she says.