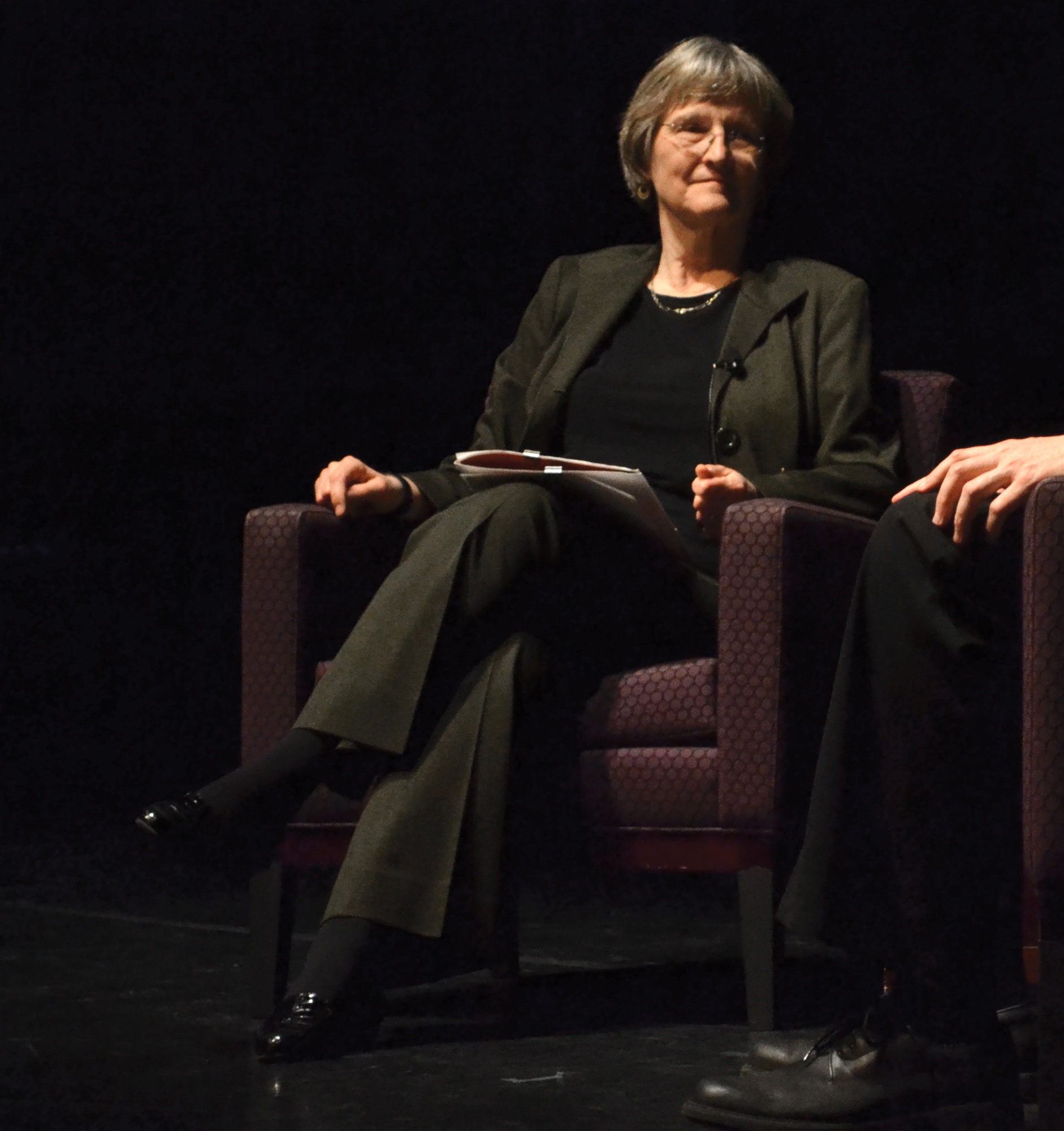 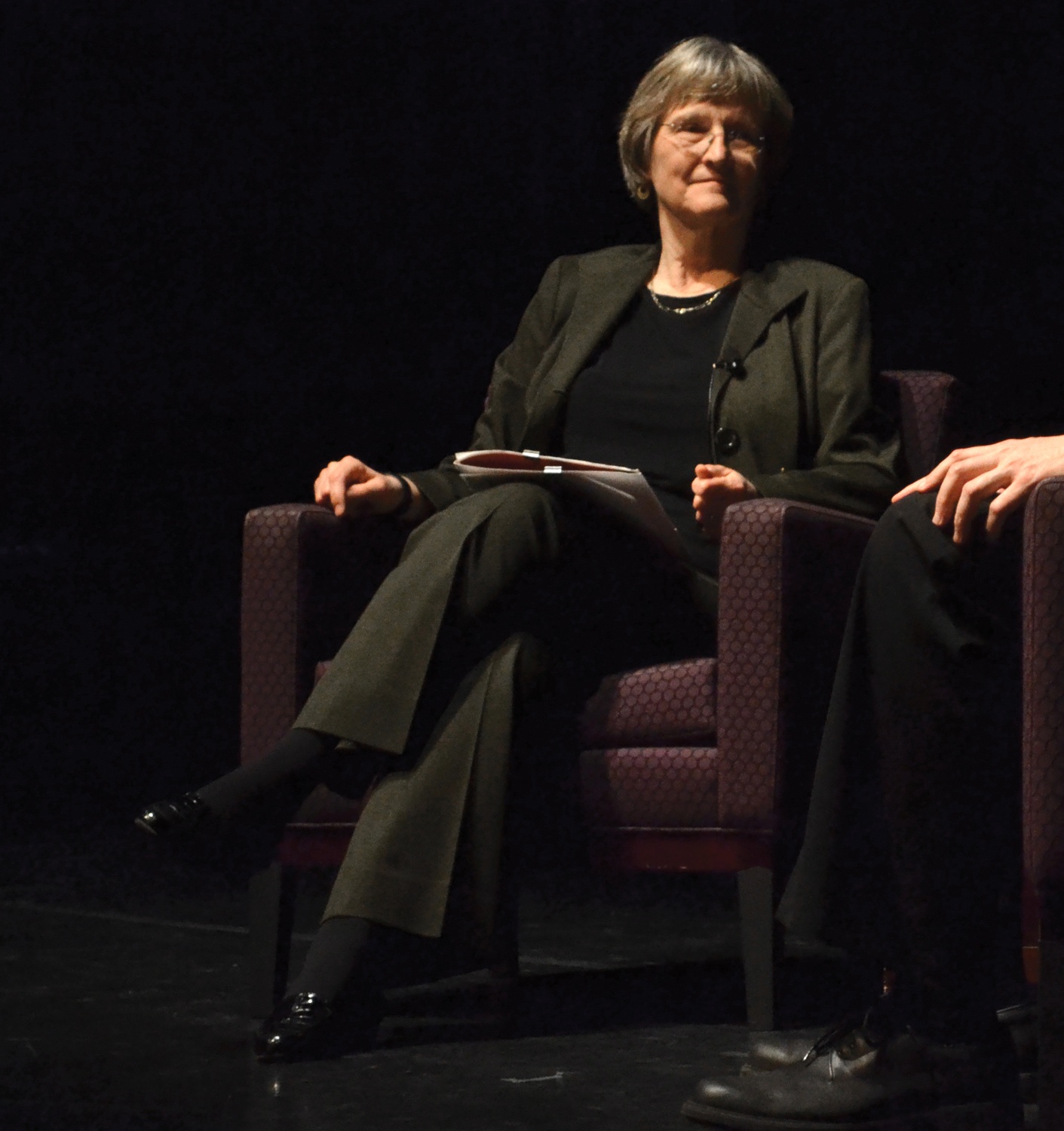 University President Drew G. Faust moderates an Office for the Arts event in Farkas Hall Thursday afternoon shortly after announcing by email the creation of a task force on sexual misconduct. By Nathalie R. Miraval

On the heels of a surge in campus-wide and national attention on Harvard’s current sexual assault policies, University President Drew G. Faust announced the creation of a task force focused on sexual assault and misconduct in an email to the Harvard community Thursday afternoon.

The email comes just three days after the publication of a first-person, anonymous op-ed in The Crimson, which detailed the author’s experience with sexual assault at Harvard and what she felt to be the University’s inadequate response. However, Faust wrote in the email that this announcement was the result of “consultation with deans and others over recent weeks.”

“[The task force] will develop recommendations about how Harvard can improve efforts to prevent sexual misconduct and develop insight into these issues based on input from both within and beyond our community,” Faust wrote.

The task force will be chaired by former University Provost Steven E. Hyman, a professor of stem cell and regenerative biology who, during his tenure as provost, helped oversee the creation of the Office of Sexual Assault Prevention and Response.

He will be joined by 17 members of the Harvard community from across the campus, including Director of Harvard University Health Services Paul J. Barreira, the minister of Memorial Church Jonathan L. Walton, Cabot House Co-Master Stephanie R. Khurana, professors from the Faculty of Arts and Sciences and several graduate schools, and two current College students, among others. 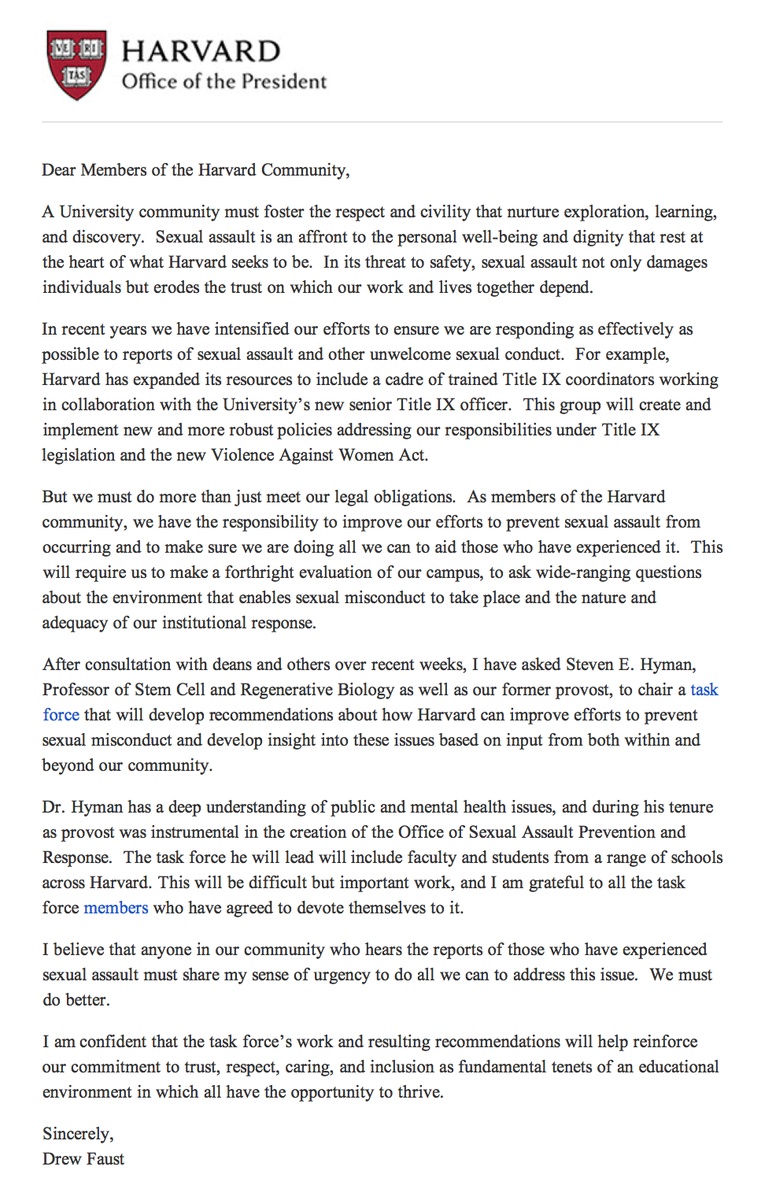 This is not the first group to be convened recently at Harvard on the topic of sexual assault. Last May, University Title IX Coordinator Mia Karvonides convened a working group tasked with evaluating whether Harvard’s current sexual assault policies met federal Title IX regulations. The charge of the new task force, however, emphasizes community awareness and prevention efforts to supplement Harvard’s “legal obligations”.

“Harvard must and will meet our legal obligations, but those obligations should not alone define Harvard’s commitment to providing an educational environment in which all students have the opportunity to thrive,” Faust wrote.

Questions the task force will be asked to consider include, “Do members of our community have a clear understanding of what sexual misconduct entails?” and, “Are faculty and other members of the Harvard community properly informed about how to help a student who reports having experienced sexual misconduct?”, according to the charge.

In an email, Hyman wrote that he was first contacted about the task force several weeks ago, explaining that he expected the group to ultimately make recommendations for ways to better prevent sexual assault.

“We simply have to find better ways to prevent these terrible incidents, and we must make sure that we provide appropriate support to students who have experienced violence and related forms of sexual misconduct.,” Hyman wrote.

At the College, where the current iteration of the debate about sexual assault originated, leaders of the Undergraduate Council and student advocates expressed mixed emotions about the extent to which undergraduates will be involved in the task force and the process by which the undergraduate task force members were selected.

In a statement to the Crimson, Quinn D. Hatoff  ’15 and Eva Stojchevska ’15, co-chairs of the UC’s sexual assault policy task force that was formed Monday, wrote that “President Faust’s announcement of yet another task force should be met with cautious optimism.”

Hatoff and Stojchevska, neither of whom was contacted about the formation of a University task force, wrote that they are “concerned that some very relevant student leaders working on this issue are left out of the conversation.”

UC President Gus A. Mayopoulos '15 noted similar concerns, confirming that the UC was not contacted by the University about the task force. He said that he has been frustrated by the extent to which administrators have sought student input in the past.

“It is outrageously late in the game to start including student input on these policies. Obviously better late than never...but honestly I don't understand what the logic was in not including students on the University-wide sexual assault policy a few years ago,” Mayopoulos said.

Demetrio D. Anaya ’15, one of two undergraduate members of the task force, spoke more optimistically about its creation. Anaya, the current president of Consent, Assault Awareness, and Relationship Educators, said that he received an email from Faust earlier this week asking if he would be interested in joining the task force.

“I feel that it’s very important for the University to make sure that all their policies are up to date, and I am optimistic that this task force will be able to make improvements in the Harvard community,” Anaya said.

Emily M. Fox-Penner '17, an organizer for Our Harvard Can Do Better, a student advocacy group that filed a complaint with the Department of Education March 28 alleging that Harvard’s policy violates Title IX, expressed reservations about the announcement.

“Our concern is just that it will be just yet another cosmetic way to look like policy is being under review without really giving students the voice that they deserve to debate the policy,” Fox-Penner said.

In January, President Obama signed a similar memorandum creating a task force of senior administrations to coordinate federal enforcement efforts to prevent and police sexual assaults on college campuses. The task force, which includes the U.S. Attorney General and the secretaries of the Education, Health and Human Services, and Interior Departments, will submit their recommendations for best practices for colleges to prevent or respond to assaults and to check that they are complying with existing legal obligations at the end of the month.

—Staff writers Amna H. Hashmi and Madeline R. Conway contributed to the reporting of this story.