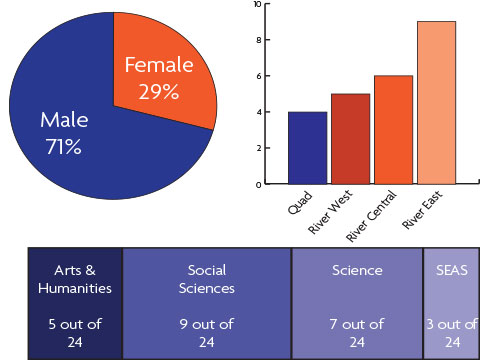 Waiting in line for a coffee in the Science Center, Ben D. Sprung-Keyser ’15 decided to check the email that had popped up on his phone before heading to math office hours.

“I thought it would be another boring email from a house mailing list,” he said. But, as he walked away with his coffee, he stopped in his tracks when he saw that it was a message informing him of his election to Phi Beta Kappa. Upon returning to his dorm, the surprises continued—Alexander L. Jaffe ’15, his roommate and friend since middle school, had also been elected to the organization.

The two roommates make up one twelfth of Phi Beta Kappa’s “Junior 24”—the first 24 members of the Class of 2015 to be elected to the organization’s Harvard chapter.

“The Junior 24 are among a highly select group of students recognized for extraordinary academic achievement,” wrote Jeffrey M. Berg, an assistant director at Harvard’s Postgraduate and National Fellowships Office, in an email announcing the selection on behalf of the chapter. Students who were selected for the honor were privately notified prior to the public announcement.

Inductees were sitting on shuttles to the Quad, doing homework in libraries and dining halls, and walking to practice and class, but all said that they were surprised by their acceptance message. Many were relieved that the wait for an answer was over.

“I was certainly flustered and did not expect it at all,” Dominic Ferrante ’15 said. “It is a great honor.”

Many juniors admitted to the organization attributed their success to a true passion for the subjects that they pursue, although they noted that every student’s academic path is unique.

“Like many students, I work hard because I love it,” Viviana M. Hanley ’15 said of her pursuits in philosophy. “It is a wonderful environment, and I enjoy the pure intellectual curiosity.”

“I was able to experiment with subjects and with a lot of classes due to the flexibility of the Social Studies concentration,” Daniel E. Backman ’15 said. “I pursued things that I wanted to pursue.”

Thirteen of the 24 juniors came from just four departments: Mathematics, Psychology, Economics, and Social Studies. Four inductees concentrate in Mathematics, making it the most represented department in the group of juniors admitted to PBK.

Math Department Chair Benedict H. Gross ’71 wrote in an email that this was “not unusual,” noting that the department attracts many strong students.

Inductee and psychology concentrator Katharine D. D'Orazio ’15 said that the Psychology Department offers “small seminars and great interactions with professors even if it is a pretty large department.”

Sprung-Keyser, an economics concentrator, noted that the Economics Department was “particularly good at offering an enormous range of classes, allowing students to find a good niche in economics.”