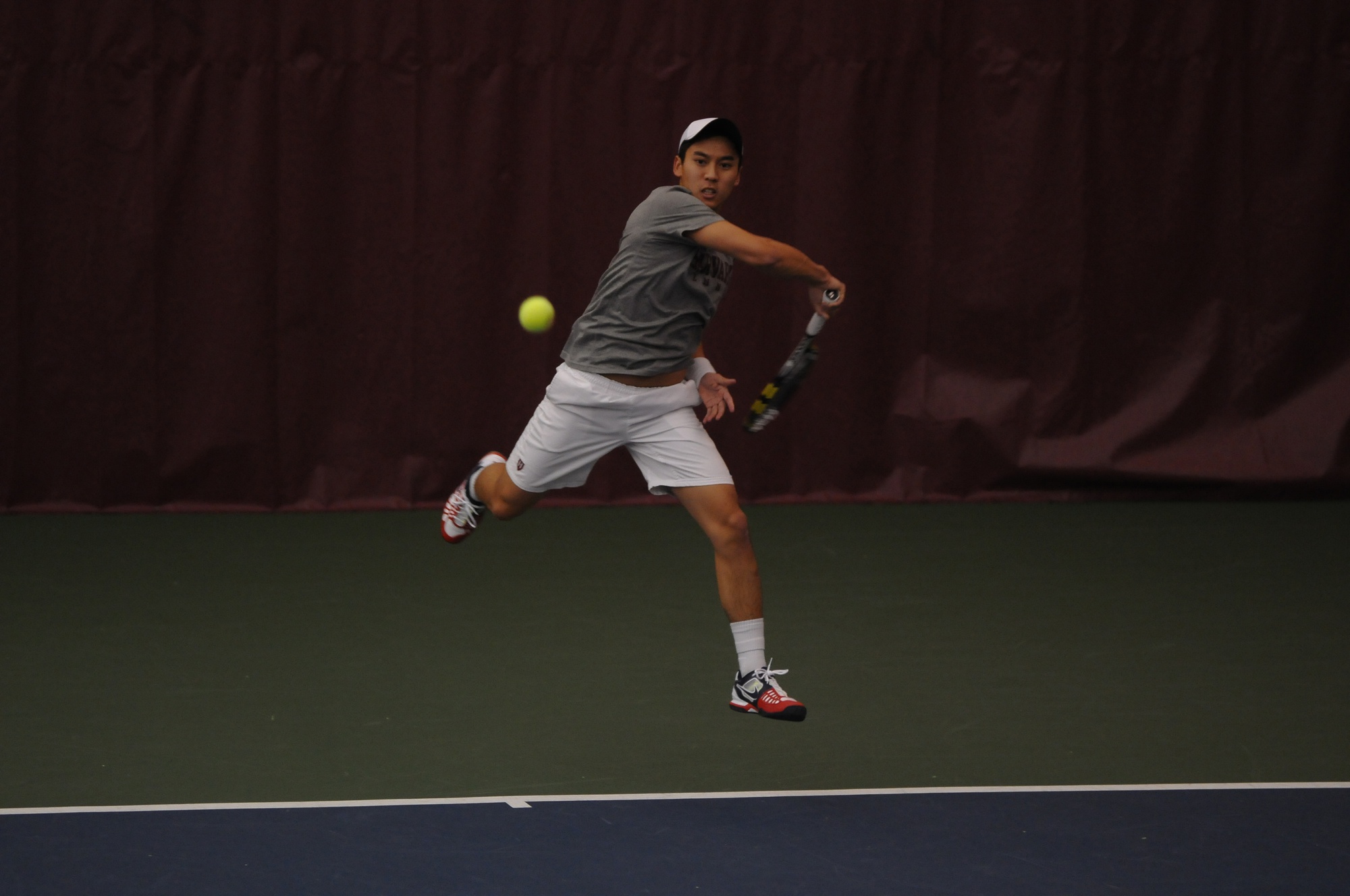 Junior Denis Nguyen and the Harvard men’s tennis team, shown here in previous action, fell to Oklahoma in the second round of the NCAA Tournament.
By Justin C. Wong, Crimson Staff Writer

The Harvard men’s tennis team entered its first-round NCAA Tournament matchup as the 31st-ranked team in the country, and the second seed in its four-team region in Norman, Okla.

But on the other hand, the Crimson’s relatively low national ranking meant that it faced No. 2 Oklahoma (25-3, 4-1 Big 12) in the second round. On Sunday afternoon, Harvard hung with the host Sooners in doubles, but was outpaced in singles as Oklahoma captured a 4-0 win.

The Crimson has now tallied NCAA Tournament victories and advanced to the Round of 32 in each of the past three seasons. The squad also improved its all-time national championship record to 16-23.

“It’s never fun when the season comes to an end, but we came up against a tough team today,” junior co-captain Alex Steinroeder said. “They were a very good team that we would’ve needed to play very well [against] to beat.”

For the third straight year, Harvard went down in the second round of the NCAA Tournament, again succumbing to a top-ranked school from a major conference after losses to Florida in 2012 and Mississippi State last season.

The doubles pair co-captain Casey MacMaster and junior Denis Nguyen, ranked 19th in the country and preparing for an appearance at the NCAA Individual Championships in late May, led consistently and pulled out an 8-5 win on the first court. Freshman Brian Yeung and sophomore Nicky Hu lost on court two, leaving the doubles point up to the third position.

Junior Christo Schultz and freshman Sebastian Beltrame were locked in a tight battle on court three. After having led, 6-4, the duo saved three match points to hold and make the score 7-7, sending the contest into a tiebreak.

Each team had multiple match points in the tiebreak, but the Sooners ultimately converted, winning, 12-10, in the break and taking home the doubles point.

“The arena was in absolute pandemonium during the finish of the doubles,” Harvard coach Dave Fish said. “It was the most exciting doubles point I’d ever seen.”

In singles, Harvard could not compete with the top of Oklahoma’s lineup. Beltrame, worn down from the doubles battle, promptly fell, 6-0, 6-1, on the second court, and Nguyen went down, 6-2, 6-2, in the top spot.

After Yeung went down, 7-6, 6-0, the contested doubles were forgotten, the match was over, and the Sooners were moving on.

“They’re ranked No. 2, and it’s easy to see why,” Fish said. “The firepower they have is remarkable…. The [Sooners] are so talented that we can play on a good level, but they just play on a great level.”

On Saturday, the Crimson faltered in doubles, but played strongly enough in singles to capture the 4-1 win and extend its all-time record against Auburn to 4-1.

Hu and Yeung went down, 3-0, but gradually regained serve before being broken one final time and losing, 8-6. Nguyen and MacMaster went up, 3-0, en route to an easy 8-4 victory, but Beltrame and Schultz were broken and went down, 8-6.

“The team had been playing really great at the end of the regular season,” Fish said. “But we seemed to lose a little coordination after not playing for a few weeks, and came out slowly.”

But Harvard turned things around quickly, winning all six first sets. Hu cruised through his match at No. 6, winning, 6-0, 6-3, and junior Shaun Chaudhuri followed suit with a 6-1, 6-2 triumph.

All of a sudden, fears of an early exit were replaced by a 2-1 lead. Steinroeder came through with a 6-3, 6-1 victory to put the Crimson one match away from advancing.

Beltrame and Nguyen had dropped their second sets, and with Yeung down a break in the second, the match was competitive yet again. But Yeung rebounded and then blanked his opponent in the tiebreak, 7-0, to complete the rally and send Auburn home.

And now, the Sooners have sent Harvard home for the summer. The Crimson failed to defend its Ivy title—this year’s champion, Columbia, advanced to the Round of 16—but the season was a success, according to Fish.

“I’m really proud of the guys,” Fish said. “This was a young team that got better throughout the season, shook off the loss to Columbia at the beginning of Ivies, swept through the rest, and made it to NCAAs. They showed their mettle this weekend.”

—Staff writer Justin Wong can be reached at justin.wong@thecrimson.com.