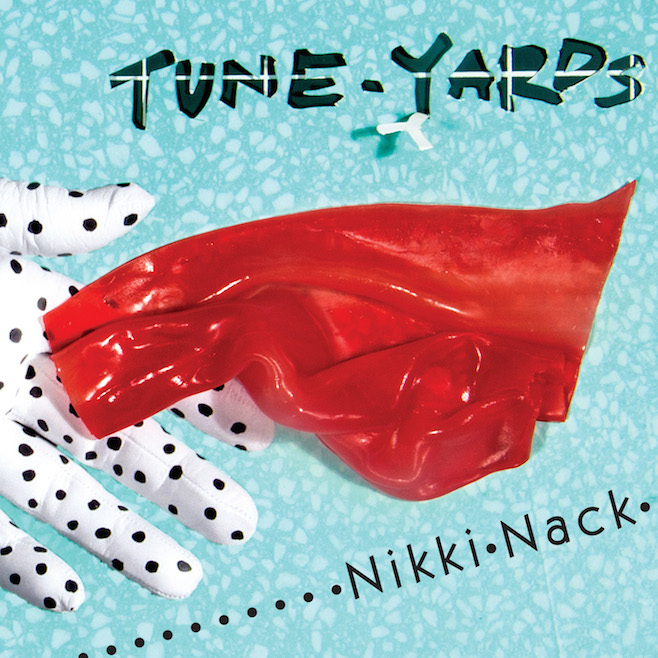 Like opening the doors to Willy Wonka’s Chocolate Factory, much—from the most sumptuous to the most terrifying—can be anticipated in the lead-up to tUnE-yArDs’s forthcoming album. “Nikki Nack” was born out of a long three years for tUnE-yArDs‘s bandmaster, Merrill Garbus. Since Garbus’s last album, 2011’s “w h o k i l l,” which was lauded for its brilliantly low-fidelity aesthetic and innovative experimental/indie pop sound, Garbus has spent much time on tour, confronting all the while the prospect of aging, the influence of her addiction-infested surroundings in Oakland, and her authenticity as an artist. These issues, in addition to several more provocative ones, are among those addressed on her newest album, which excels indubitably in restoring Garbus’s inventive spirit but falls short at times in providing a cohesive listening experience.

The first moments of “Nikki Nack” are downright petrifying. With a looped electro-harpsichord playing what feels like a corrupted renaissance ballad, there is an immediate and visceral sense that Garbus has gone straight off the deep end and intends on bring us all down with her. But “Find a New Way,” “Nikki Nack”’s first track, is truly about Garbus’s rebirth, her musical renaissance out of the sterile state she had come to occupy in recent years. And, as the song’s name suggests, it was indeed willpower that drove Garbus through the formidable and inelegant process of revival. “Find a New Way” proceeds to showcase a cadre of spastic electronic drum beats, as if to reenact Garbus’s own experimental regimen during her recalibration with and integration into the estranged frequencies of the musical world. Garbus never exactly settles rhythmically  in “Find a New Way,” nor does she in the album as a whole. She toys between syncopations, appealing all the while to Haitian beats inspired by her tour abroad and a diverse assortment of bells, chimes, and clappers. Rarely can the listener get comfortable; comfort often entails understanding, and understanding can make music sound predictable. And if one thing is for certain, “Nikki Nack” is in no way predictable, providing, for the most part, delightful surprises, but occasionally shortchanging itself by cutting short refrains that deserve sustaining.

“Find a New Way” serves as an excellent introduction not only to the album’s narrative, but also to its stylistic intentions. On a foundational level, Garbus’s music overlaps with a definitively modern brand of musical experimentalism, characterized by an interest in dissonance and conceptions of elegance, a proclivity for jestful irony, an obsession with sonority, and a tinge of insouciance. Just before the 2:30 mark in “Find a New Way,” however, Garbus’s vocals lighten up and exit the choppy, almost robotic incantation that preceded. “When I see you changing, it makes me think that I can change too,” Garbus merrily sings, marking a distinct section of the song whose purity and catchiness hints at a new tUnE-yArDs dimension, one that diverges from classical influences by The Dirty Projectors and Animal Collective in favor of new sounds reminiscent of more cheery artists, such as MIKA, Michael Jackson, or even M.I.A.

The second track, “Water Fountain,” provides incontestable confirmation of this refurbished element of the tUnE-yArDs persona, bursting now with childlike elation, buoyant rhythms, and delightfully simple basslines. In “Water Fountain,” tUnE-yArDs turns to the schoolyard as its musical lab, toying with the claps one might find in a children's handgame and the clinking of a recess bell. The song is not all fun and games, however. At one point, Garbus adopts an apathetic tone of voice and, as a child might, admits, “I saved up all my pennies and I gave them to this special guy / ...He gave me a dollar, a blood-soaked dollar / I cannot get the spot out, but it’s okay; / it still works in the store.” Not unfamiliar with addressing political issues through song, Garbus appears in her lyrics to be implicating capitalist America as a corruptive and inhumane force, penetrating, within the context of this song, even our children’s elementary education. Garbus retreats after to the wonderfully poppy and summery chorus, successfully integrating the tUnE-yArDs proclivity for confronting serious concerns into their revamped sound.

In “Real Thing,” Garbus both lyrically and sonically questions her authenticity as an artist and, apparently, her artistry in such tracks as “Water Fountain.” The track opens with a smooth and compelling R&B background. It is soon interrupted, however, by a jarring and mournful cry, declaring, “I am no real thing.” The next line follows with, “They say I am the real thing,” and a catchy back-and-forth is established between Garbus’s denial of her authenticity and others’ affirmation of it. Throughout the song, we hear much of the pleasant vocals and harmonies that characterize the renewed tUnE-yArDs. Occasionally, however, unsettling refrains that are more standard to the tUnE-yArDs previous work creeps in as well. This ongoing struggle between multiple musical and personal identities can be found in many of the album’s tracks, perhaps most poignantly in “Hey Life” and “Left Behind.” Garbus’s exploration of this struggle, though intriguing, can prove disorienting, as she seems to remain a bit musically and narratively confused throughout.

It is ultimately hard to say what binds the album together. The search for identity certainly reappears, as in “Rocking Chair,” which presents Garbus meditating through a Haitian rhythm, trying to cope with her echoed solicitations for sleep. Gender roles are broached as well, such as in “Manchild,” in which Garbus plays on Michael Jackson’s “Beat It” to question men on their sexual practices. As in “Water Fountain,” political issues are on Garbus’s mind as well. Even without one obvious underlying theme, however, the album is an overall success. Garbus engages with profound questions, provides the listener with a diverse musical experience—from the get-on-your-feet-and-dance to the listen-up-and-brood—and maintains control of her sounds in each of these pursuits. Though the album cannot boast a reliable pleasantness or comfort in its musical offering, its innovation, uniqueness, and occasional flashes of pure ecstasy do more than enough to justify its worth as a truly outstanding piece of work.