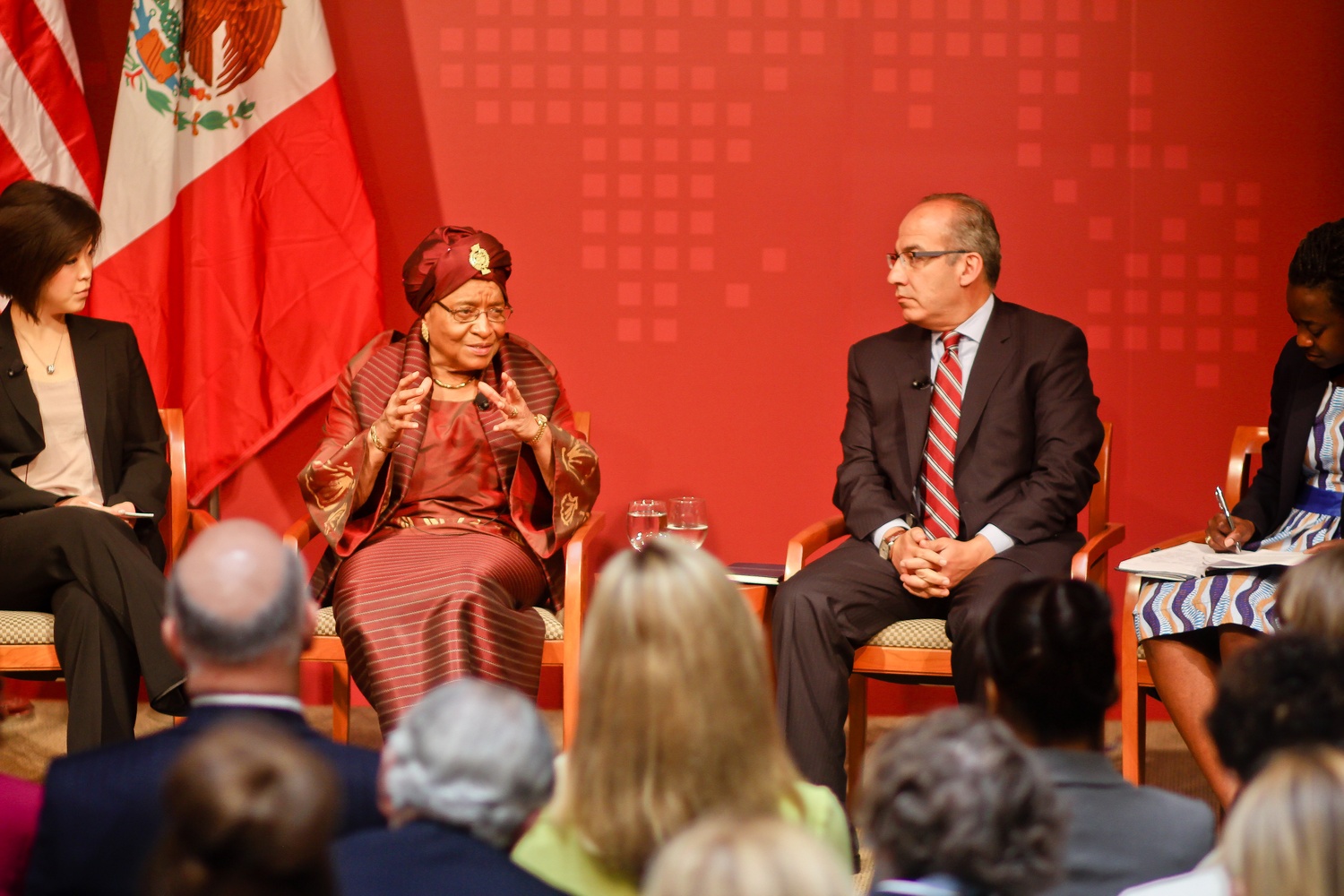 Liberian President Ellen Johnson Sirleaf, second from left, touches on some of the challenges she faces today, as former Mexican President Felipe Calderón looks on during a launch event for the Kennedy School of Government's capital campaign Thursday afternoon. By Shunella Grace Lumas
By Forrest K. Lewis and Tyler S. B. Olkowski, Crimson Staff Writers

Two heads of state, University President Drew G. Faust, and Kennedy School of Government Dean David T. Ellwood ’75 shared the stage at the John F. Kennedy Jr. Forum on Thursday to celebrate the transition of the Kennedy School’s $500 million capital campaign from the quiet to the public phase.

The two-day launch event, called IDEASpHERE, kicked off with a forum featuring Kennedy School graduates Felipe Calderón, the former president of Mexico, and Ellen Johnson Sirleaf, the current president of Liberia. According to Kennedy School Academic Dean Iris Bohnet, the Forum was filled to capacity, with an audience of 750 that consisted of an even distribution of school supporters, alumni, and current faculty and students.

Following Sirleaf and Calderon’s talk, Faust took the stage, stressing the importance of the Kennedy School in the University’s capital campaign vision.

“The Kennedy School embodied ‘One Harvard’ before it was cool,” Faust said, adding that the school has “led the way as the rest of the University has become more globally engaged.”

“To ask what you can do is a deceptively simple question,” she said, alluding to the school’s campaign slogan.

Faust then introduced Ellwood, who emphasized the School’s aim to educate and empower students to make a difference.

“I am convinced the Harvard Kennedy School must and will answer the increasingly urgent call for exceptional public leadership,” he said. “If we can’t, what place can? And if we won’t, who will?”

True to Ellwood’s claim, Calderón and Sirleaf shared personal anecdotes from their tenures in public service and connected their experiences to their time at the Kennedy School.

Both heads of state reflected that their “call to leadership” began during their childhood years, and credited their parents for inspiring them to take part in politics.

Sirleaf, the first female president of an African country, said she hopes to to inspire other women to follow suit.

“My first role is trying to inspire women,” she said. “You must accept the fact that there will be vulnerability in response to [disaffected citizens’] needs...and that’s part of what leadership is all about.”

Calderón called on the U.S. to use its influence to make a difference globally, and ended the forum by giving advice to new graduates of the Kennedy School.

“The most important recommendation is to believe in something—have an honest motive in your life,” he said. “Once you pick the right motive...fight for it with all your heart.”

Bohnet, who helped organize IDEASpHERE, said before the launch event that the sessions were arranged by reaching out to faculty members and inviting them to suggest ideas, sessions, and speakers.

“This is unheard of for the Kennedy School to run such a large conference with 12 parallel sessions taking place at the same time,” Bohnet said.

In an interview before the forum, Bohnet said, “What is most exciting for me is...that we come together as a community...to celebrate ideas that make the world a better place.”

The festivities will continue Friday with a keynote speech from Lawrence H. Summers, a former president of University and Secretary of the U.S. Treasury Department. Details of the campaign’s progress will be announced Friday.