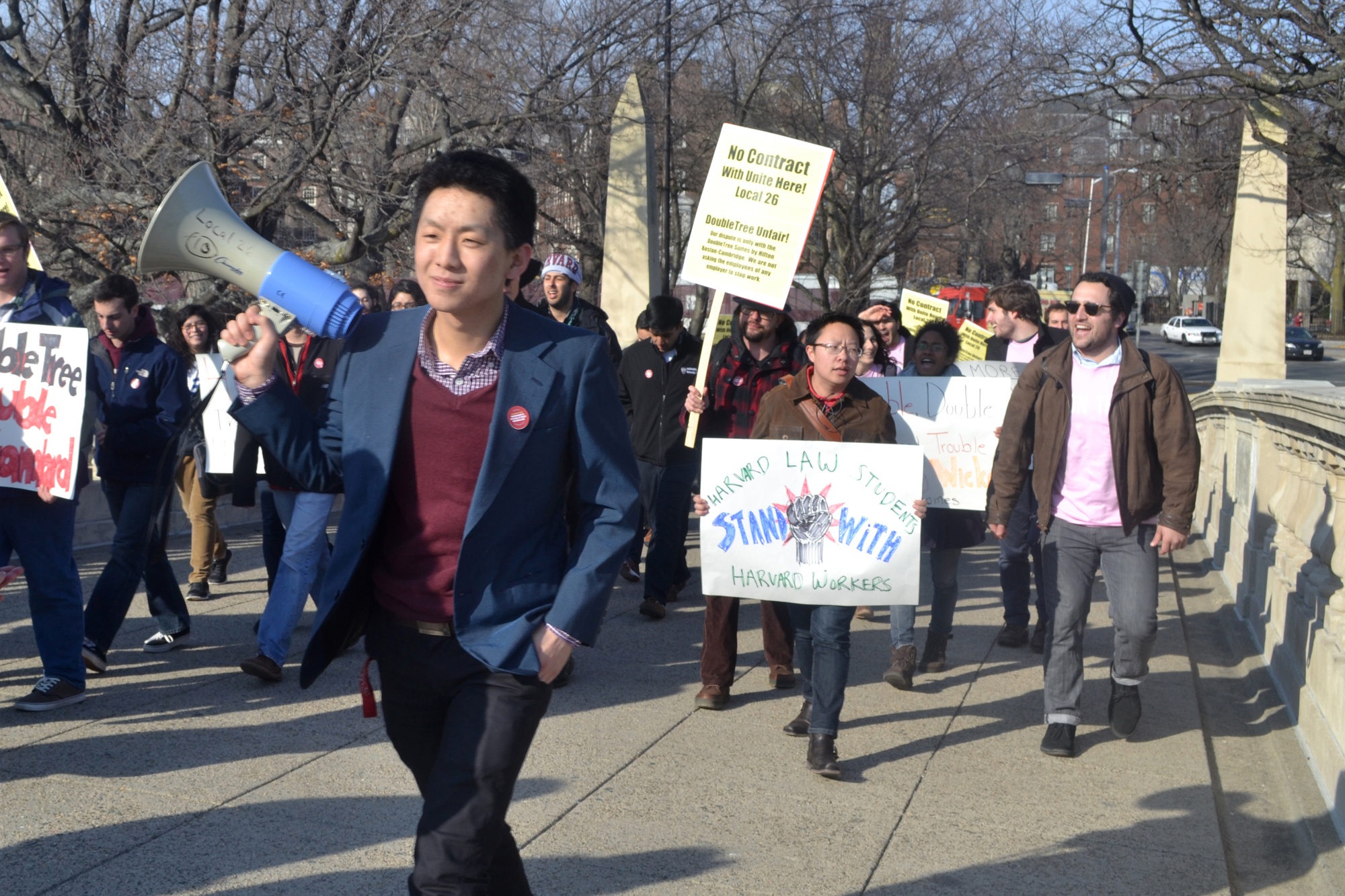 Female workers at the Boston-Cambridge DoubleTree Suites by Hilton Hotel are calling on Class Day speaker and Facebook executive Sheryl K. Sandberg ’91 to support their efforts to unionize.

Continuing their yearlong campaign to pressure the hotel chain to allow fair process unionization, DoubleTree employees created an online petition and video in hopes that Sandberg, co-author of “Lean In: Women, Work, and the Will to Lead,” will hold a “Lean In Circle,” a women’s peer support group inspired by Sandberg’s book, for them.

Since DoubleTree employees initially signed a petition in support of unionization in March 2013, workers and activists have asked Harvard to put pressure on the hotel, which is run by Hilton but housed in a Harvard-owned building, in hopes that managers will be more receptive to allowing fair process unionization.

However, over the last several months, the University has maintained that the issue should be resolved between Hilton and the union, UNITE HERE! Local 26. Hilton Worldwide has said it does not believe that a true majority of Doubletree employees wish to be represented by any union—a prerequisite of fair process unionization.

Sandberg told Doubletree workers she is too busy to meet with them, according to Doubletree housekeeper Delmy Lemus, who spearheaded the online petition asking Sandberg to host the Lean In circle. Lemus expressed disappointment that Sandberg would not be able to join her and her coworkers. 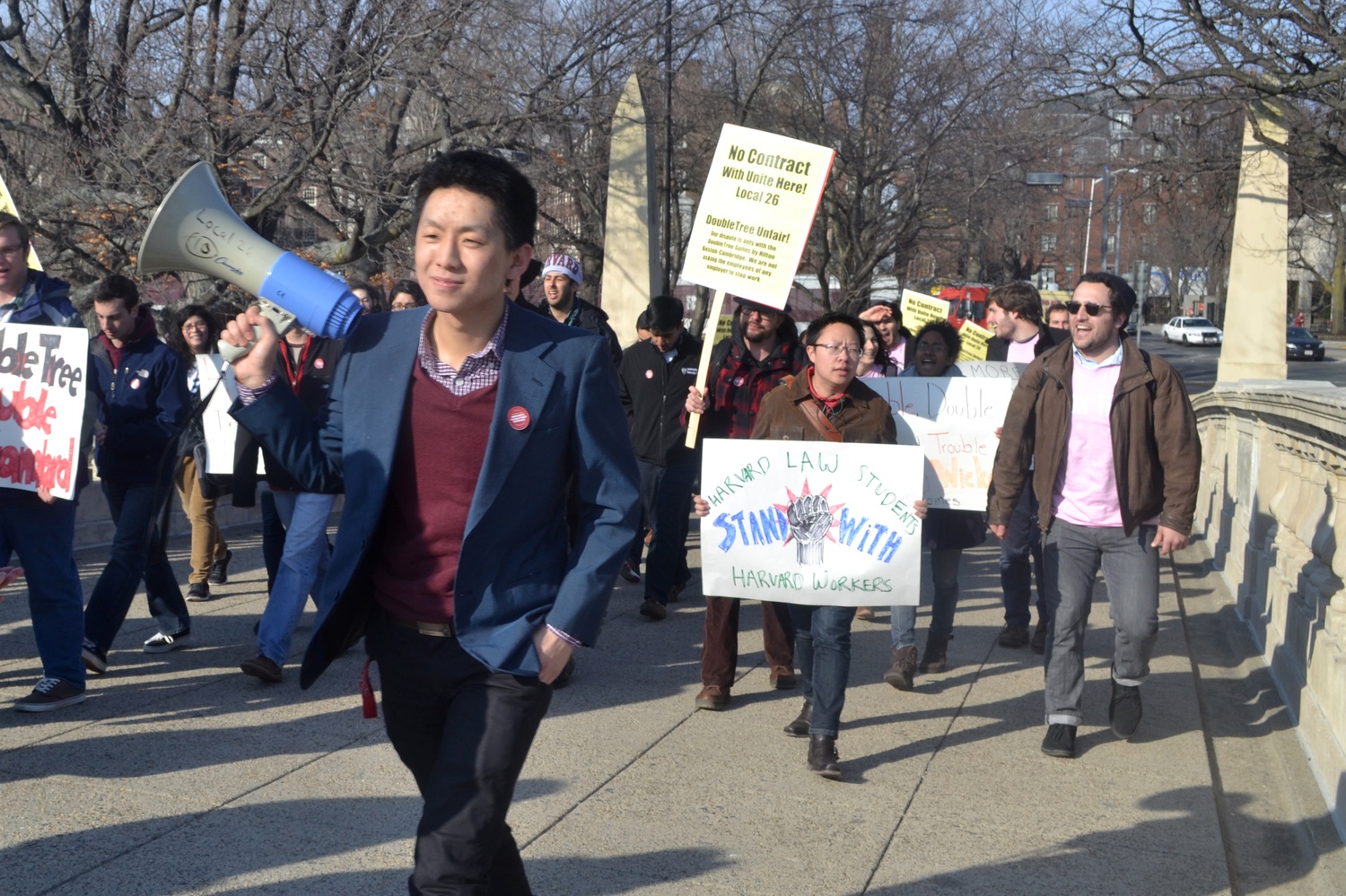 “Maybe in her mind she is not going to say yes to everyday people like us working hard, and she thinks that we are low-class people,” Lemus said. “But she is wrong because we work hard, and we are women.”

Doubletree employees and Student Labor Action Movement activists said they plan todistribute flyers at Sandberg’s Class Day address on Wednesday to raise awareness for their campaign. They also will hold a Lean In Circle on Thursday afternoon, which SLAM expects 15 to 20 female Doubletree workers will attend, regardless of whether or not Sandberg joins.

“[Sheryl Sandberg] is such a powerful women's rights activist,” SLAM member Zoe A. Onion ’17 said. “There are lots of problems in women’s rights at the DoubleTree…. We hope that she will bring more public attention to it and also empowers the women at the DoubleTree.”

Several Harvard feminist organizations have also rallied in support of the petition, echoing concerns of critics that Sandberg, while proclaiming a message of feminist empowerment, caters to an educated, upper-class demographic rather than to all women.

“On a basic level, for me, feminism is always about putting the most marginalized in the center and that means that we don’t just focus on getting women into CEO positions, we also focus on getting domestic women basic rights,” said Sasanka N. Jinadasa ’15, president of the Radcliffe Union of Students, a feminist student group.

Despite the controversy Sandberg’s book has inspired in some circles, many activists see her presence on campus as a time to gain visibility for the cause of Doubletree workers.

“Having that access to [Sandberg] is an opportunity for the women of the Doubletree who have been fighting to get heard by Harvard,” said Kirin Gupta ’16, co-director of the Harvard College International Women’s Rights Collective.

Sandberg had not returned a request for comment by press time on Monday.