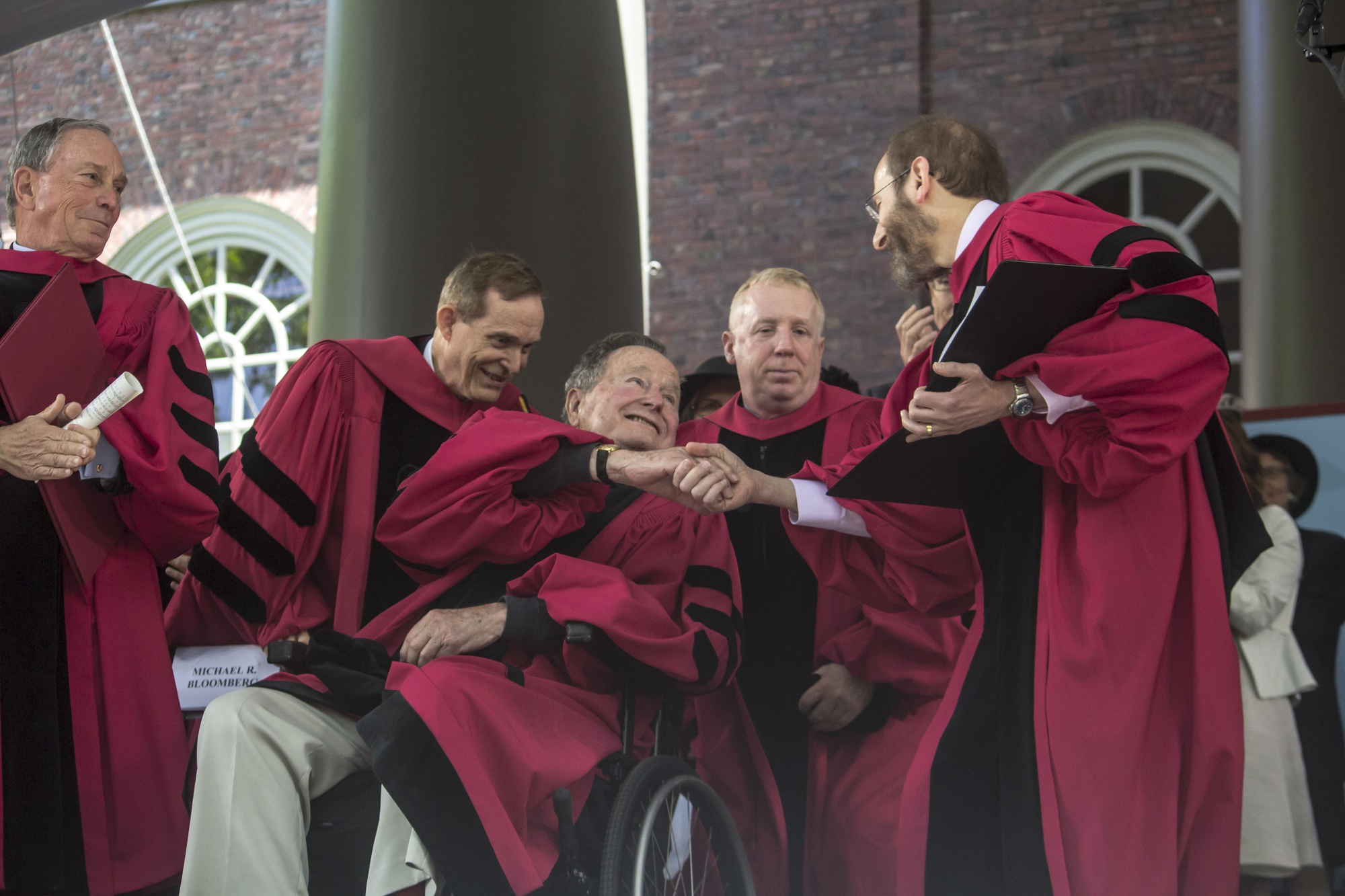 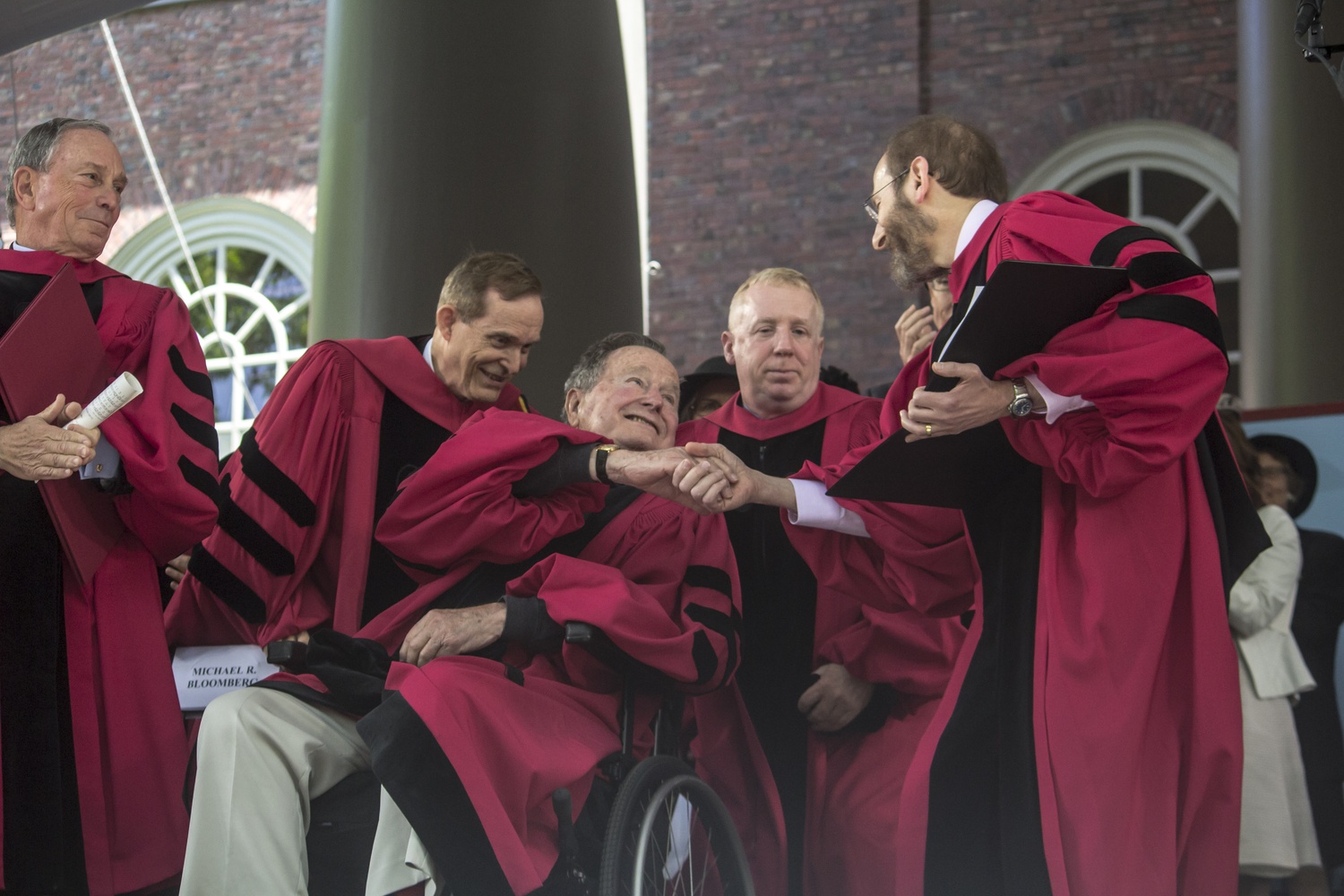 “With faith courage, and service true, his eyes ever fixed on points of light, he piloted our nation through changeful skies,” University President Drew G. Faust said as she awarded the 41st president of the United States a Doctor of Laws degree.

Bush arrived around 8:30 am and spent about 15 minutes in Massachusetts Hall before posing for pictures with Faust, Provost Alan M. Garber ’76, and other honorands.

“It feels great,” Bush, who graduated from Yale, told The Crimson about the degree before the Morning Exercises began. “It’s a great honor.”

After the ceremony outside of Mass. Hall, Bush was pushed in a wheelchair through the Old Yard and into Tercentenary Theater, where thousands had gathered for the conferring of degrees.

A Republican, Bush served as president from 1989-1993 after spending eight years as the nation’s vice president. He was born in Milton, Massachusetts and attended Yale College. At 89, he is the oldest living former president. 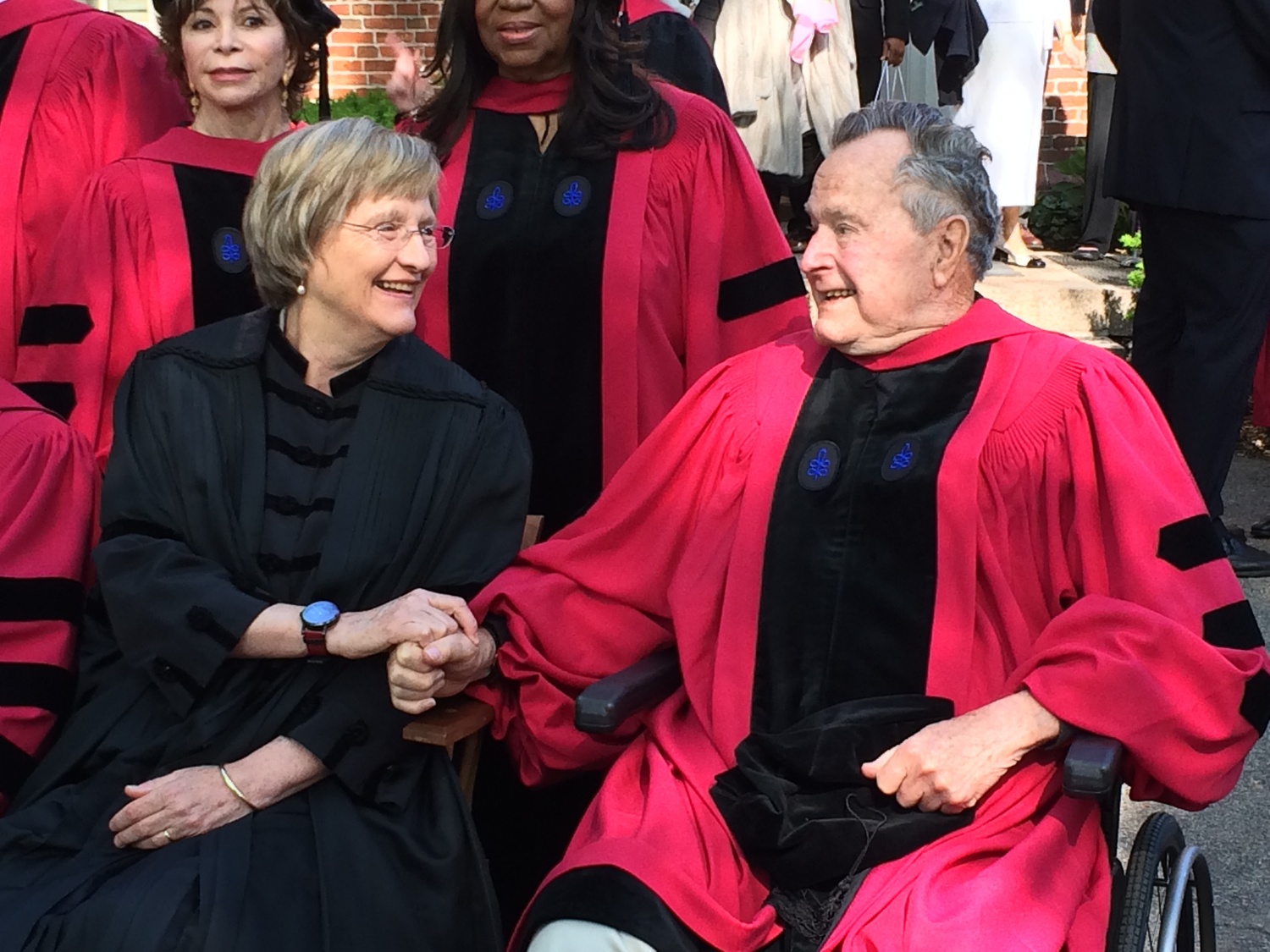 University President Drew G. Faust and President George H.W. Bush await the taking of a photograph outside of Massachusetts Hall Thursday morning, hours before Bush was to receive an honorary degree. By Matthew Q. Clarida

The last to receive his honorary degree, Bush was praised for his work on the North American Free Trade Agreement, the Americans with Disabilities Act, and his role in the end of the Cold War.

Garber, who made pointed jokes about Yale throughout his remarks on Bush, began his speech by referring to Bush’s days as a cheerleader at his alma mater. The end of his speech elicited a standing ovation from the crowd in Tercentenary Theater.

Just prior to Bush, former New York City Mayor Michael R. Bloomberg, who graduated from the Business School in 1966, received an honorary degree. Bloomberg will deliver the Commencement address during the Afternoon Exercises.

Franklin, the first woman inducted into the Rock and Roll Hall of Fame, received a standing ovation from many of the graduates when she received her honorary degree. 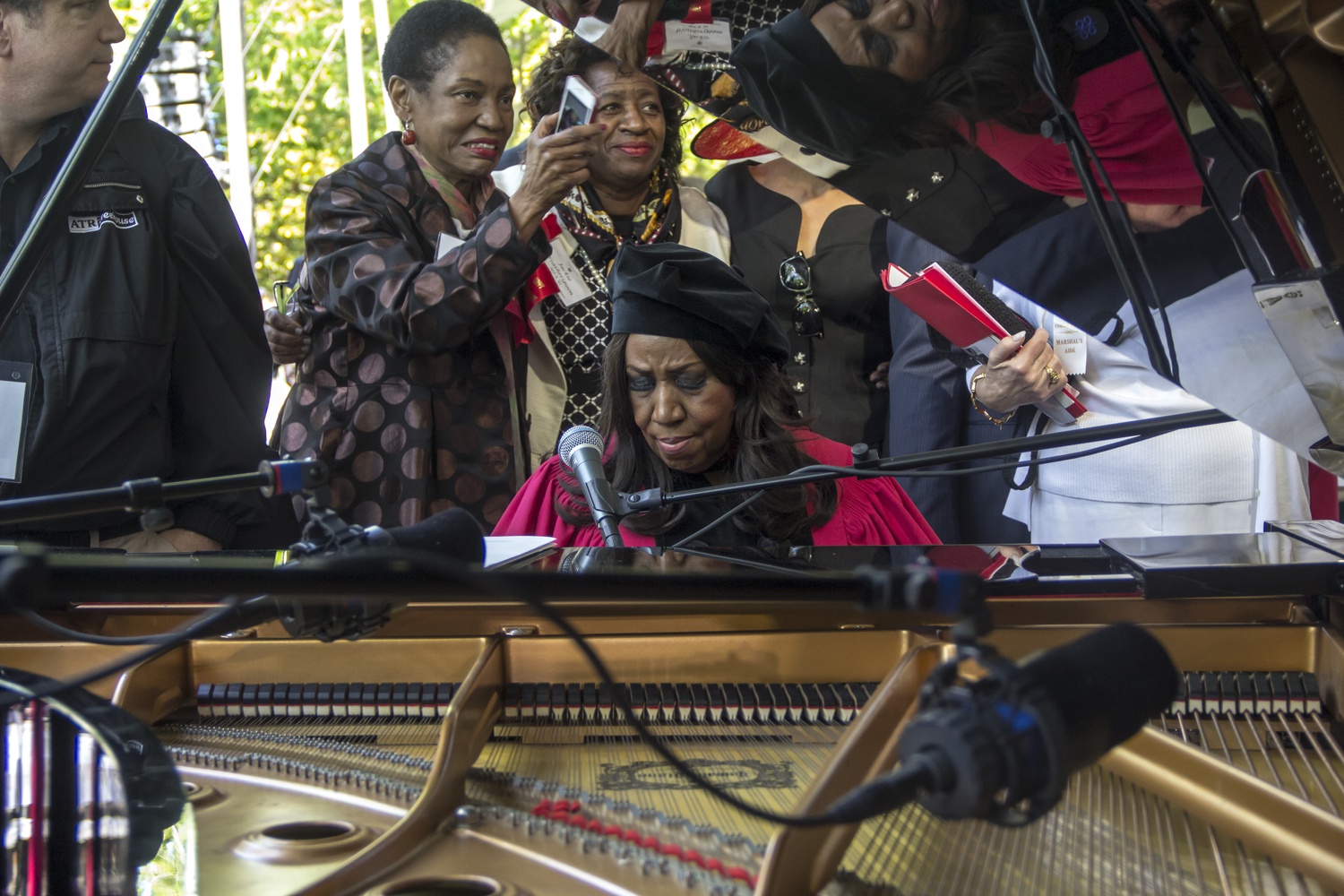 Aretha L. Frankin performs a musical piece during the 2014 Commencement Morning Exercises, where she would receive and honorary degree. By Zorigoo Tugsbayar

Garber, who spoke about each honorand, called Franklin, “her regal highness, the Queen of Soul.”

In addition to receiving an honorary degree, she performed the national anthem during the morning exercises.

The eight honorands were the first to receive degrees during the Commencement Exercises. The University awarded 7,301 degrees and 33 certificates on Thursday, including 1,662 to students at the College and 1,003 to students at the Graduate School of Arts and Sciences.

Many of the graduating seniors sitting in Tercentenary Theater bore red duct tape on their caps as a symbol of the activism that had been a dominant theme in campus discussions over the past year.

Also during the Morning Exercises, graduating senior Timothy J. Barry-Heffernan ’14 delivered the Latin Salutatory, during which he discarded his cap in favor of a Roman military helmet.

The exercises also featured the senior English address entitled “The [Harvard] Spring,” given by Sarah F. Abushaar ’14, in which she compared graduating seniors to revolutionaries in the Arab Spring.

Abushaar was followed by Kennedy School graduate Philip A. Harding, who delivered the graduate English address that featured stories of George Washington’s time at Harvard in 1775.