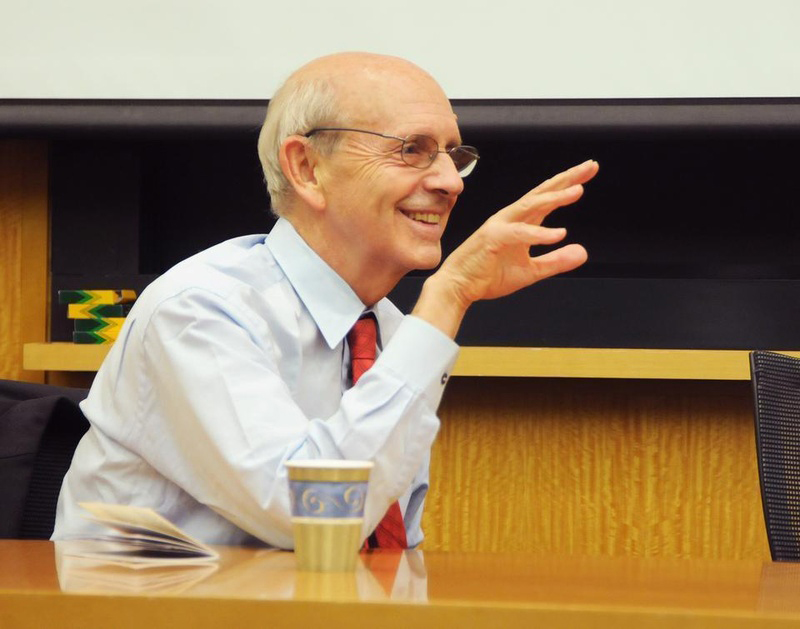 "Law requires both a heart and a head," U.S. Supreme Court Justice Stephen G. Breyer, a member of the Harvard Law School class of 1964 said during his Supreme Court confirmation hearing in 1994. "If you don't have a heart, it becomes a sterile set of rules removed from human problems, and it won't help. If you don't have a head, there's the risk that in trying to decide a particular person's problem in a case that may look fine for that person, you cause trouble for a lot of other people, making their lives yet worse. So it is a question of balance."

Throughout Breyer’s career as a professor at the Law School, Chief Judge of the U.S. Court of Appeals for the First Circuit, and finally a Supreme Court Justice, friends and colleagues agree that he has demonstrated his commitment to this balance, striving for justice through a pragmatic approach to the law.

An Early Aptitude for Law

Breyer was born in San Francisco, California, in 1938. He attended Lowell High School, where he excelled on the debate team. In a 1994 interview, his high school debate coach said, “You can spot the potential lawyers early.... He would do copious research on a debate topic while other kids were out, you know, doing things like stealing hubcaps." Breyer’s classmates also predicted his future achievements, voting him “most likely to succeed” when he graduated in 1955.

Breyer was accepted to both Stanford and Harvard undergrad, and though he preferred the latter, his parents urged him to go to Stanford as his mother did not want him to become too bookish, according to an article by U.S. News and World Report. He graduated Phi Beta Kappa from Stanford in 1959.

Breyer returned to the Law School in 1967 to work as an assistant professor and then as a full professor, teaching administrative law, until 1980. Former professor Alan M. Dershowitz noted that he and Breyer have a similar teaching style. “We’re both very questioning, we’re both very skeptical,” Dershowitz said.

When Professor Charles J. Ogletree was a student, he met Breyer not through class but instead through Breyer’s public interest work. At the time, Breyer was “the force,” Ogletree said, working to ensure that Law School students had public interest opportunities as alternatives to jobs at corporate law firms.

Breyer has returned to the Law School for many events and lectures over the past couple of decades. In one event this past fall, he held a question and answer session with current Law School Dean Martha L. Minow during which he explained the inner workings of the Supreme Court. Minow noted in an email that Breyer’s “careful and clear explanations of the work of the United States Supreme Court and his candid responses to questions showed what a great teacher he is.”

“The Epitome of Fairness”

After working as a professor, Breyer served as Chief Judge on the U.S. Court of Appeals for the First Circuit, and was then nominated for the Supreme Court by President Clinton in 1994. Clinton said in his announcement, “Without dispute, [Breyer] is one of the outstanding jurists of our age. He has a clear grasp of the law, a boundless respect for the constitutional and legal rights of the American people, a searching and restless intellect, and a remarkable ability to explain complex subjects in understandable terms.”

Breyer was sworn in on August 3 as a U.S. Supreme Court Justice of the United States.

Breyer’s friends and colleagues note his pragmatic approach to law. “He is the epitome of fairness,” Dershowitz said. “He never allows an ideological thumb to be put on the scale of justice. He is a man of deep principle and pragmatism at the same time.”

Fried pointed to the continuity between Breyer’s work as a professor and as a justice. “What stands out is an attempt to find reasons and reason in a morass of difficult political controversy,” he said. Fried also remarked on Breyer’s polite demeanor. “His opinions on the court never indulge in any kind of sarcasm...or the dismissive characterization of the views of the other side,” he said. “There’s the total lack of any nastiness—he just doesn’t have it in him.”

According to others in his field, Breyer’s thoughtfulness is illustrated in the arguments and the often complex questions or hypotheticals that he poses on the Supreme Court. “His questions to lawyers arguing before the Court are masterful explorations of practical consequences as well as doctrinal distinctions,” Minow wrote.

Breyer’s intricate arguments are apparent in the numerous length dissents that he has written and presented. He wrote a 44-page dissent District of Columbia v. Heller, in which the Supreme Court struck down a D.C. regulation that banned gun ownership and upheld the right to keep and bear firearms for the purpose of self-defense.

On the topic of how to interpret the Constitution, Breyer explained in a NPR interview in 2011, "Much in the Constitution is written in a very general way. Words like 'freedom of speech' do not define themselves. Nor does the word 'liberty'...The application of those values changes as the circumstances change.”

Despite the fact that Breyer has not worked at Harvard Law School since 1980, he has maintained many friendships from his time there. Ogletree and Breyer have remained close, spending time together with their respective grandchildren.

Dershowitz said that he and Breyer have been close friends for “half a century.” The night that Breyer was appointed to the Supreme Court, he came to Dershowitz’s house to celebrate. Dershowitz plays poker with Breyer from time to time as well, but said, “since he became a judge, he no longer bluffs.”

—Staff writer Molly E. Wharton can be reached at molly.wharton@thecrimson.com