When the campaign gets going, University leaders hit the trail 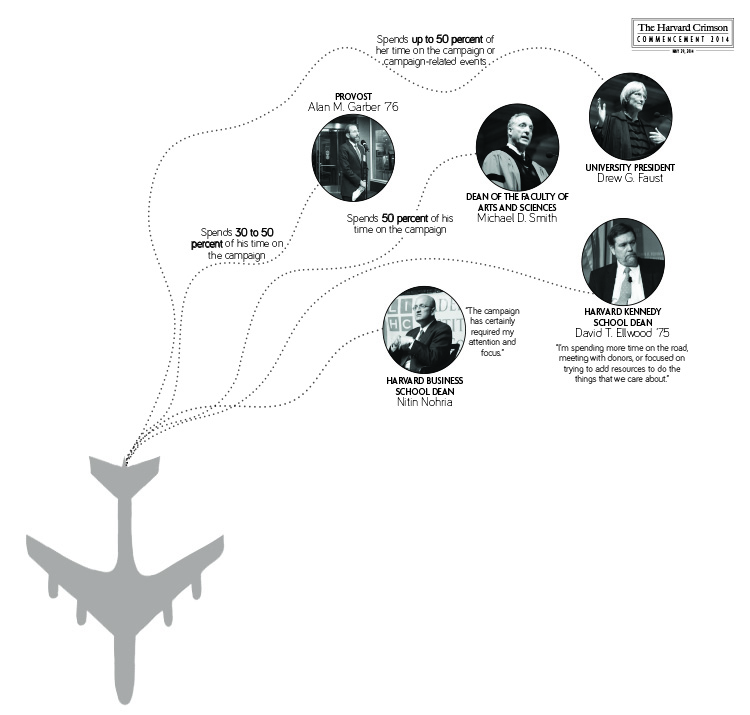 When Harvard’s public face is most needed to sell the University to donors in London, Rio de Janeiro, or Hong Kong, being buried in papers and committee work in Massachusetts Hall does not do much good. To inspire donors and seed their stake in Harvard’s expensive list of capital campaign priorities, University President Drew G. Faust takes to the road.

With a capital campaign to run and dollars to raise, Faust has been spending an increased amount of her time traveling, headlining alumni events, and speaking with donors. In the last few years, Faust’s travel itinerary has spanned not just the United States, but at least four continents, as she visited cities ranging from New York to Seoul and Mumbai. Faust says that she now spends up to 50 percent of her time on campaign-related efforts, travel among them.

“It’s a year that has been defined in many ways by the campaign and by the various events University-wide and at the individual schools relating to the campaign, so that’s been a standing part of my life since the launch in September,” Faust says.

She is not alone. As Harvard embarks on an ambitious, $6.5 billion fundraising drive, leaders across Harvard’s schools have adjusted their schedules, exchanging time in their Cambridge or Boston offices for airports and hours on the road. Eight months into the Harvard Campaign’s five-year public phase, regular events across the world attract large audiences of alumni and other potential donors, along with high-profile Harvard administrators who deliver remarks urging audiences to give.

University officials see traveling for the campaign as a means to solicit donations outside of Cambridge, but  it also offers them a chance to school alumni around the globe in the University’s priorities. And as they increasingly leave their desks for the road, top administrators take their work—and their cell phones—with them, stretching their schedules and prompting some to question whether the University’s leaders should more highly prioritize their day-to-day roles on campus.

Along with Faust, Harvard’s other central administrators in particular focus much of their attention on the University-wide drive—and its priorities—they are tasked with spearheading. Provost Alan M. Garber ’76 says he spends 30 to 50 percent of his time on campaign-related activities, even if he spends “much less time” traveling than Faust.

Deans of the University’s various schools likewise devote time on the job to fundraising and making pitches to donors. Dean of the Faculty of Arts and Sciences Michael D. Smith says he spends half his time campaigning for FAS, the school whose $2.5 billion goal indicates that it will benefit most from The Harvard Campaign, which altogether is poised to set the international record for drives among institutions of higher education.

Dean of Harvard Business School Nitin Nohria writes in an email that the campaign “has certainly required my attention and focus.” Kennedy School Dean David T. Ellwood '75 similarly says he is spending an increased amount of time on the road and meeting with donors, though he did not specify a percentage.

These efforts take up not only a great deal of time, but also require far-reaching travel. Faust has flown across the country—to Los Angeles and Washington, D.C., among other cities—and across the globe to promote the University and its campaign priorities to alumni and potential donors.

She spoke in Davos, Switzerland, and London in January, and at a “Your Harvard: New York City” event in mid-May, where she addressed Harvard affiliates on a decommissioned aircraft carrier on the Hudson River.

Even day-to-day events that involve interacting with students or alumni seemingly independent of the campaign can become campaign-related if donors are in attendance. Varsity basketball games, for which alumni fans—some of them prominent donors—regularly descend on Cambridge, are a recent example.

“There’s a certain overlap and confusion between activities that are student-facing, dean-facing, management-facing, and at the same time alumni-facing,” Faust says. “Some [activities] fit into multiple categories.”

Dean of the School of Engineering and Applied Sciences Cherry A. Murray also says she multi-tasks; she often speaks with alumni on trips she takes to Washington for the several advisory boards she sits on external to her responsibilities at Harvard.

Of course, administrators’ heavy focus on fundraising is not new to this capital campaign’s public phase—even in non-campaign years, administrators including the University president and FAS dean devote significant amounts of time to speaking with alumni and donors.

Former FAS Dean William C. Kirby, whose time in University Hall in the mid-2000s did not coincide with a capital campaign, says he still spent a “significant amount” of time fundraising and engaging with alumni throughout his tenure, taking a number of trips to New York and “all across the country and to Asia and Europe.”

Whenever University leaders take to the road, they have a chance to fundraise. But perhaps just as importantly, administrators seek to inspire a heightened sense of excitement at campaign events and use it as an opportunity to educate alumni worldwide on the priorities that Harvard has chosen to fund with its campaign. While this may not consist of directly soliciting, administrators say that it serves an important role in building social capital, which they hope will translate to physical donations.

Vice President for Alumni Affairs and Development Tamara E. Rogers ’74 says that Faust, in particular, is in a position to attract alumni to events.

“The President is always a big draw,” Rogers says. “Many alumni don’t have the opportunity to hear her speak. By her going around the country, it’s a great chance for people to finally have a chance to see her and hear her and then perhaps meet her at the reception afterwards.”

Garber, who serves in a similar role when he travels, agrees that Faust is the campaign’s prime messenger. 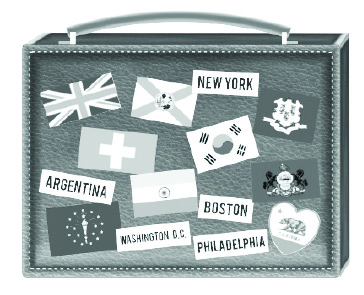 “President Faust is very much the public face of the campaign, and she tells the story like nobody else can,” Garber says.

Former University President Neil L. Rudenstine, who traveled extensively when he led what is considered Harvard’s last capital campaign in the 1990s, suggests that the president’s most significant role is articulating the University’s priorities to the larger alumni community, rather than asking for money.

“That's the most important thing a President can bring,” Rudenstine says. “If you have a significant, very large campaign, as we did—at least measured by the ’90s standards—people want to hear from the President why it's so important. It's much more important than actually asking people directly for the money.”

When he traveled for his campaign, Rudenstine says he spent probably no more than half his time speaking with donors.

“I found on the whole that my asking people [for gifts] was very, very limited, and I much preferred to talk to people about what the needs were,” he says.

Kirby, for his part, says fundraising and engaging with alumni enables administrators to hear outside perspectives on Harvard.

“It’s very important to get out and talk with others,” he says. “It’s a central part of the job, irrespective of a campaign.”

With increasing travel commitments and fundraising responsibilities, the campaign adds to schedules already stretched thin by running a major research university. According to Kirby, when going on a fundraising trip necessitates traveling to a significantly different time zone and then returning to campus, “you’re basically up most of the night."

“You are simply busier, without question, if you’re on the West Coast or you’re in Europe or you’re in East Asia, than you’d otherwise be,” Kirby says, adding that administrators are “totally plugged in” to the goings on in Cambridge while they are off campus.

Faust maintains that she still runs the University when she is on the road for the campaign—she says just using her cell phone allows her to keep in touch with her responsibilities on campus.

“The fact is, the deans and Drew [Faust] and I—we all are pretty much available 24/7,” Garber says.

Other administrators, like Nohria, similarly suggest that they are able to keep up with day-to-day roles in Cambridge despite increased focus on the campaign. Murray says she can delegate work on campus to two executive deans.

Still, some faculty members question the effectiveness of leadership whose topmost executives devote as much, if not more, time to fundraising than to addressing faculty concerns. Ali S. Asani ’77, a professor in the Near Eastern Languages and Civilizations Department, says that it is difficult for faculty members to meet with Smith, and suggested that “the campaign definitely affects” the dean’s level of engagement with the academics in the departments he oversees.

“There are so many demands on [the FAS Dean’s] Office—you’re an administrator, you’re in the campaign, you’re doing this—that he has no time for faculty,” Asani says.

An FAS spokesperson did not respond to a request for comment on the claim that Smith has become inaccessible to faculty members.

Richard M. Losick, the interim chair of the Department of Molecular and Cellular Biology, says that he remembers “an era when the senior leadership was much more engaged with the faculty and students than is the case today.” He says that while a lack of connection across the University hierarchy may or may not be a direct result of campaigning, it is commonly used as an explanation for it.

“I didn’t notice an abrupt change that I could attribute to the campaign, but I’ve heard this brought as an excuse,” Losick adds.

Even administrators who insist that they are fully engaged with their on-campus responsibilities while fundraising acknowledge the added demands of a campaign.

Although at “crucial moments” it could take up to two-thirds of his efforts, Rudenstine says that he set a personal rule not to spend more than 30 or 40 percent of his time on his campaign, as an average, when he was president.

“There were just too many other academic and other things to attend to that had obvious, very high priority, and while the campaign was an immense priority as well, one just had to ration what one did,” Rudenstine says. Still, he says that traveling on the road was “tremendously important” in his own experience.

"It might seem to some people to take the President or other people away from the University, which in one sense it obviously does, for a reasonable amount of time,” Rudenstine says. “At the same time...there's no way to communicate what the University means and what it’s doing and what it can achieve without actually having group sessions, without meeting with individuals, without having large alumni gatherings where you can give talks, and so on.”