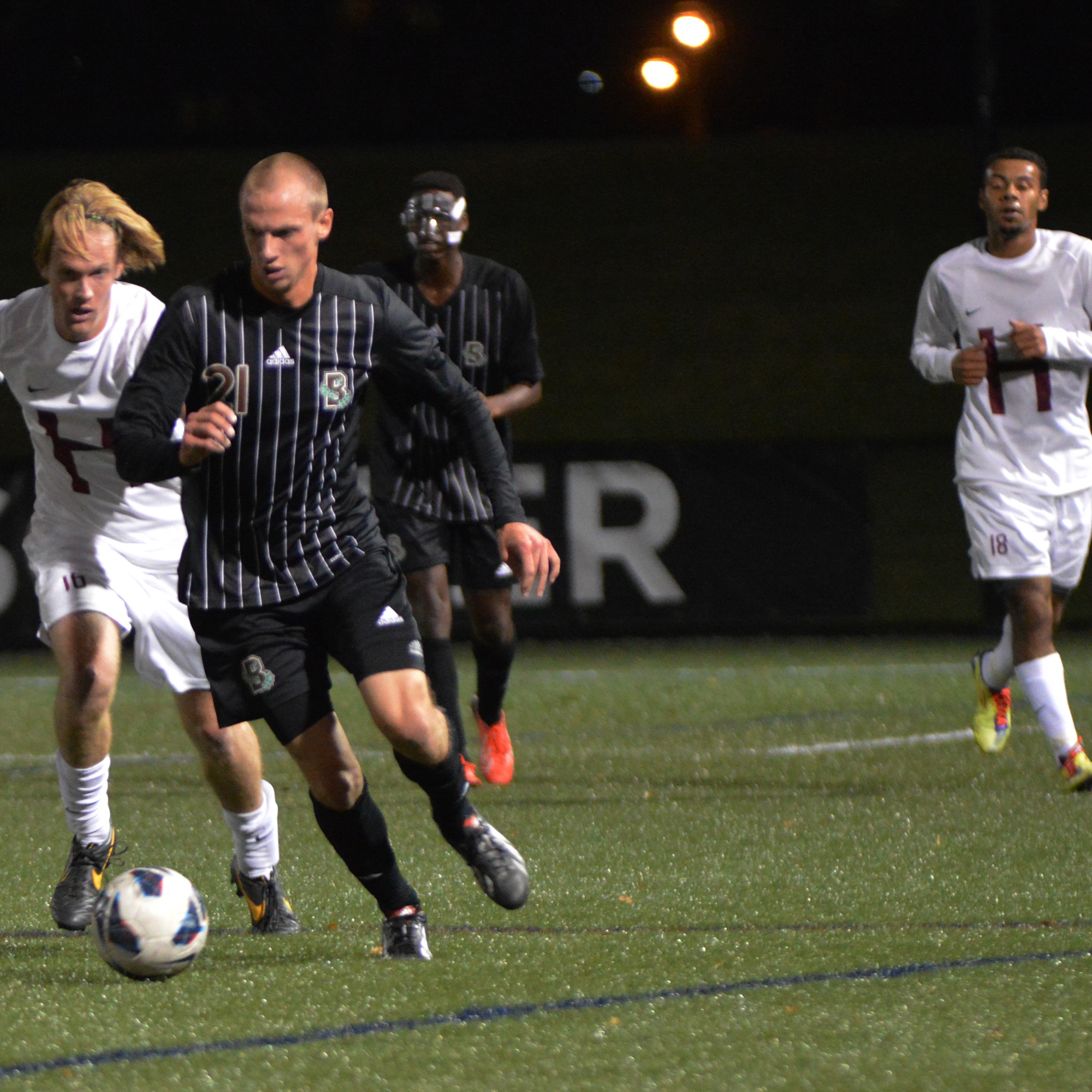 For the second straight game, the Harvard men’s soccer team (0-3-0) failed to convert on key scoring chances late in the contest, ultimately falling on the road, 2-1, to St. John’s (1-3-2) on Saturday. The Crimson has lost its first three games by a combined four goals.

“I think the spin we take from the game was how painful it was,” junior co-captain Mark Ashby said. “We haven’t looked at the film yet so I don’t want to make quick judgments, but it was a really painful loss.”

Ashby noted that both teams had long stretches of possession, but the Red Storm was simply better than the Crimson in taking advantage of its chances between the pipes. St. John’s only notched two shots on goal but converted both opportunities, while Harvard had only one goal across seven tries.

“[St. John’s] is a playoff team, and I thought we did very well in the game,” Harvard coach Pieter Lehrer said. “We just have to tighten up little areas…. These guys are in a good place. Obviously the outcomes are not what we desire, but we can fix a couple things and get on a pretty good roll pretty quickly.”

The Crimson created a lot of early chances, including two shots in the first six minutes of the game. Three early offside penalties and two failed corner kicks kept Harvard from striking first. The Red Storm—as would be a theme in the game—punished the Crimson for not taking advantage.

In the 31st minute, just 66 seconds after an offside call on Harvard, St. John’s junior Gabriel Camara corralled a cross in the box and launched a shot on goal. Though blocked, the ball came right back to Camara, who sent a shot over junior goaltender Evan Mendez to give the Red Storm a 1-0 lead. It was the third goal of the defender’s career.

Harvard battled back, generating four shots and four corner kicks in the final three minutes of the half. Junior midfielder Tim Schmoll had two shots blocked and another saved during the spree, where St. John’s redshirt senior Jordan Stagmiller successfully kept the Crimson from scoring the equalizer.

“I think from this year to last year we are creating a lot more chances and having plenty of opportunities on goal, but we are lacking a decisive finishing effort,” Ashby said. “We are looking for guys to step up and bury their chances…. Ninety-five percent of the way we are good, but we have to finish.”

The second half was more of the same. After co-captain Kyle Henderson missed an early shot, the Red Storm came right back down the field in the 53rd minute to make the score 2-0. St. John’s senior Tim Parker provided the assist to redshirt senior Jordan Rouse, who beat Mendez and then kicked the ball into the open net.

“In our first three games, we are averaging two goals against per game, so we need to work on tightening up the defense because that is not the standard,” Ashby said. “It’s unacceptable.”

The Crimson fought back, with Henderson notching his second goal of the season to bring Harvard within one. However, the Red Storm blanketed the Harvard offense for the final third of the game. The Crimson had just two shots the rest of the way, both saved by Stagmiller.

After, Lehrer was quick to praise the team for its fight. The coach noted that the team had more shots on goal than its opponents in two of the three games, and that its current record does not reflect its level of play.

“[This team] has great fight and phenomenal players,” Lehrer said. “We are creating a lot of chances, and it’s a very great group. They have a lot of resolve. You watch them play and you are playing against a playoff team and they are expecting to win those games…. It’s a bit bumpy now with the results, but I think we will get there.”