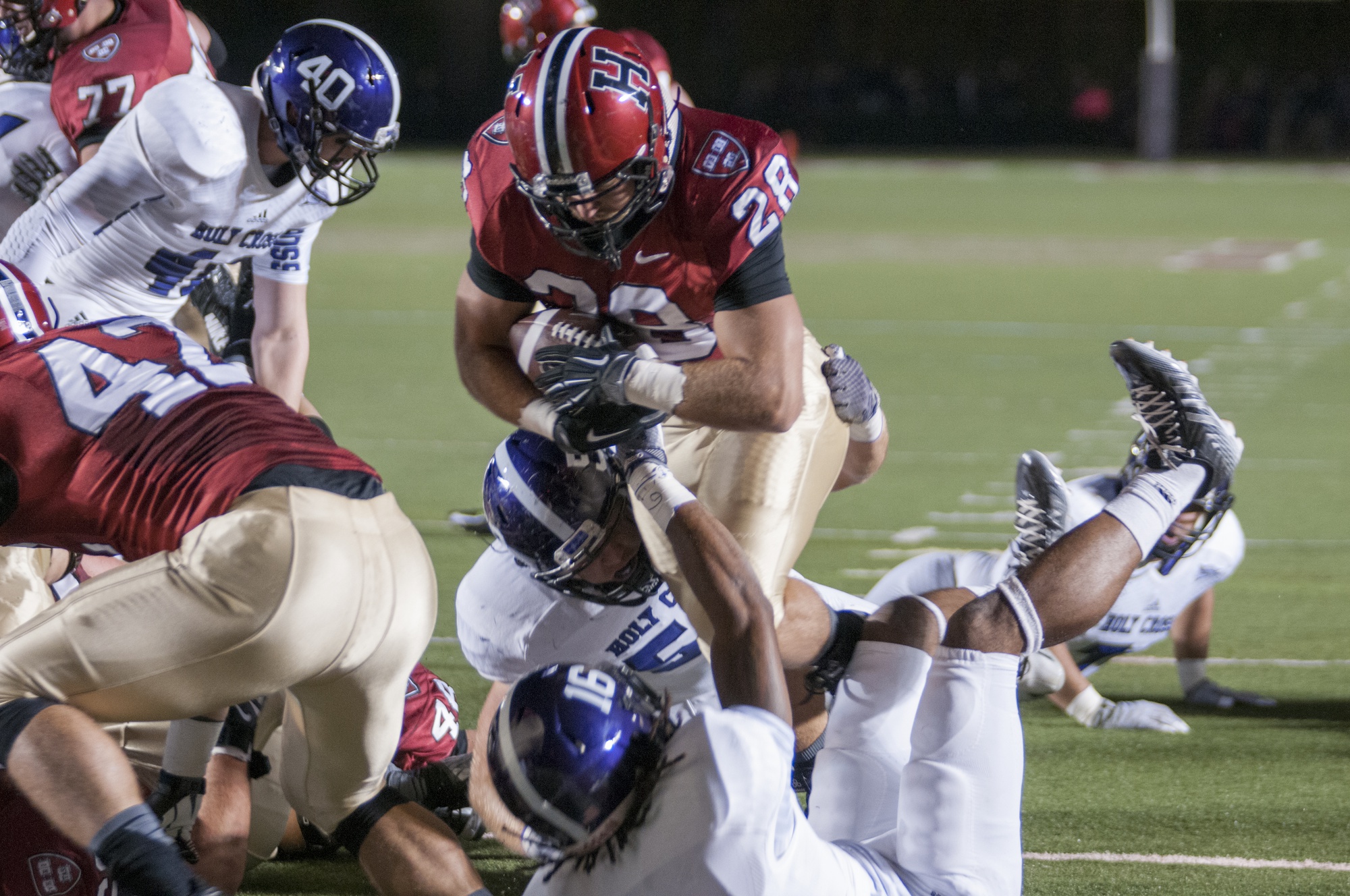 It may not have been pretty for the first 25 minutes, but it didn’t take three overtime periods to decide the game this time around.

Down a starting running back, wideout, and kicker—as well as a starting quarterback for the majority of the first half—the Harvard football team (1-0) still managed to dispatch Holy Cross (2-2), 41-18.

While playing without senior playcaller Conner Hempel, the Crimson appeared to be floundering coming out of the halftime break, giving the ball right back to Holy Cross after a three-and-out.

Crusaders quarterback Peter Pujals and company seized the opportunity, exploiting the inexperience of sophomore corner Sean Ahern and junior Jordan Becerra, and marching Holy Cross down the field to take its first lead of the game, 18-14.

The lead didn’t last long though, as Hempel came back in and appeared to have shaken off the back spasms that sidelined him in the first half. The senior scrambled free from an oncoming defender and hit sophomore tight end Ryan Halvorson open on the left sideline for 15 yards.

A few plays later, Hempel fired at sophomore running back Anthony Firkser, who leaned into the end zone to give the advantage back to the Crimson.

“Our offense starts with the front line, and those guys were outstanding tonight,” Hempel said. “[Senior running back Andrew] Casten did a great job in the holes, making people miss, and that makes my life easier, along with my receivers making amazing catches.”

Then the defense appeared. Junior defensive end James Duberg returned the ball on the next play to the Crimson, stripping the ball from Pujals. Junior linebacker Matt Koran picked it up, and on the ensuing play, Casten, filling in for injured junior tailback Paul Stanton, broke free for an 18-yard touchdown run, his second of the night to give Harvard a 27-18 lead.

“It’s exciting to make turnovers,” senior defensive end Zack Hodges said. “If you’re not worrying about us, then hopefully you’re dead. So I hope you’re either doing one or the other.”

Holy Cross’s next drive was nearly as short. Crusaders tailback Gabe Guild rushed into a block of Crimson defenders, and junior linebacker Eric Medes punched the ball out and fell on it.

Then the points began pouring in. Harvard capitalized on the fumble, with Hempel finding Firkser and Braunecker for 30 and 21 yards, respectively. Casten finished off the drive by punching through the defensive line to reach the end zone for the third time.

Casten, who had 151 rushing yards coming into the contest, surpassed his career total with 153 yards on the night when he broke free on a 55-yard scamper on the following possession, setting up Hempel’s 21-yard touchdown pass to Halvorson. The drive marked the Crimson’s fourth straight that ended in six points.

On the Crimson’s first drive of the night, Hempel scrambled on third down and went down hard. Harvard scored on the next drive off of a three-yard Casten run, but the quarterback was carted to the locker room, recalling memories of last year’s showdown with the Crusaders when Hempel left the game early due to a hyperextended knee. The senior finished with 137 yards and two touchdowns on Friday night.

Junior Scott Hosch took the reins at quarterback for the remainder of the half.

Hosch, who hadn’t thrown a pass in a game prior to replacing Hempel, led the team on a methodical scoring drive but also demonstrated his inexperience. With less than a minute left in the half, Hosch attempted to thread the needle to Braunecker over the middle, but the ball flew over the junior’s head and into the hands of defensive back Luke Ford.

The pick gave the Crusaders field position at Harvard’s 29-yard line with 40 seconds left. Pujals hit wideout Tyler Artim across the middle to put the ball at the one-yard line, but a holding penalty limited the Crusaders to just a field goal.

On Holy Cross’s second drive, the Crusaders switched to pass-heavy play-calling and moved the chains with ease, countering Harvard’s one-yard touchdown run with one of their own.

After bottling up the Crusaders on the first drive of the contest, the Crimson struggled to contain Pujals the rest of the opening half. The secondary showed its youth early on, missing tackles and blowing coverages. Pujals took advantage, torching Harvard’s defense for 125 yards through the air before the break.

But the Crimson adjusted during intermission, holding Pujals to just 69 yards passing and a pick after the Crusaders’ first drive of the second half.

“We did a lot of good things, but we can’t make the mistakes that we did and hope to beat a good team,” said Holy Cross coach Tom Gilmore.