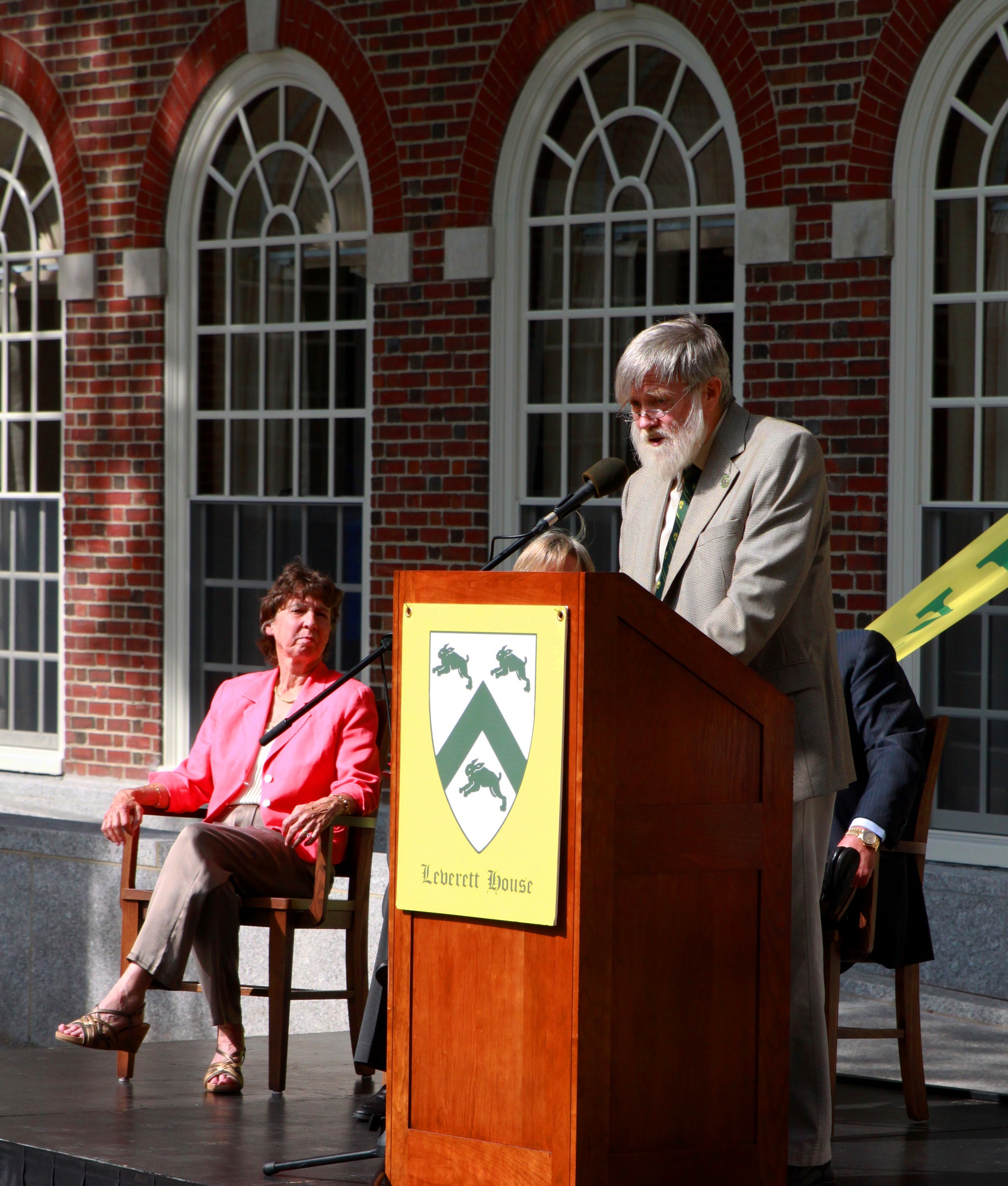 Jazz music mixed with the chatter of more than 100 attendees gathered in the newly dedicated Stapleton Courtyard, some of whom eagerly pointed to their former bedroom windows. The dedication came three weeks after students moved back into the building and during one of the University’s largest alumni reunion weekends. 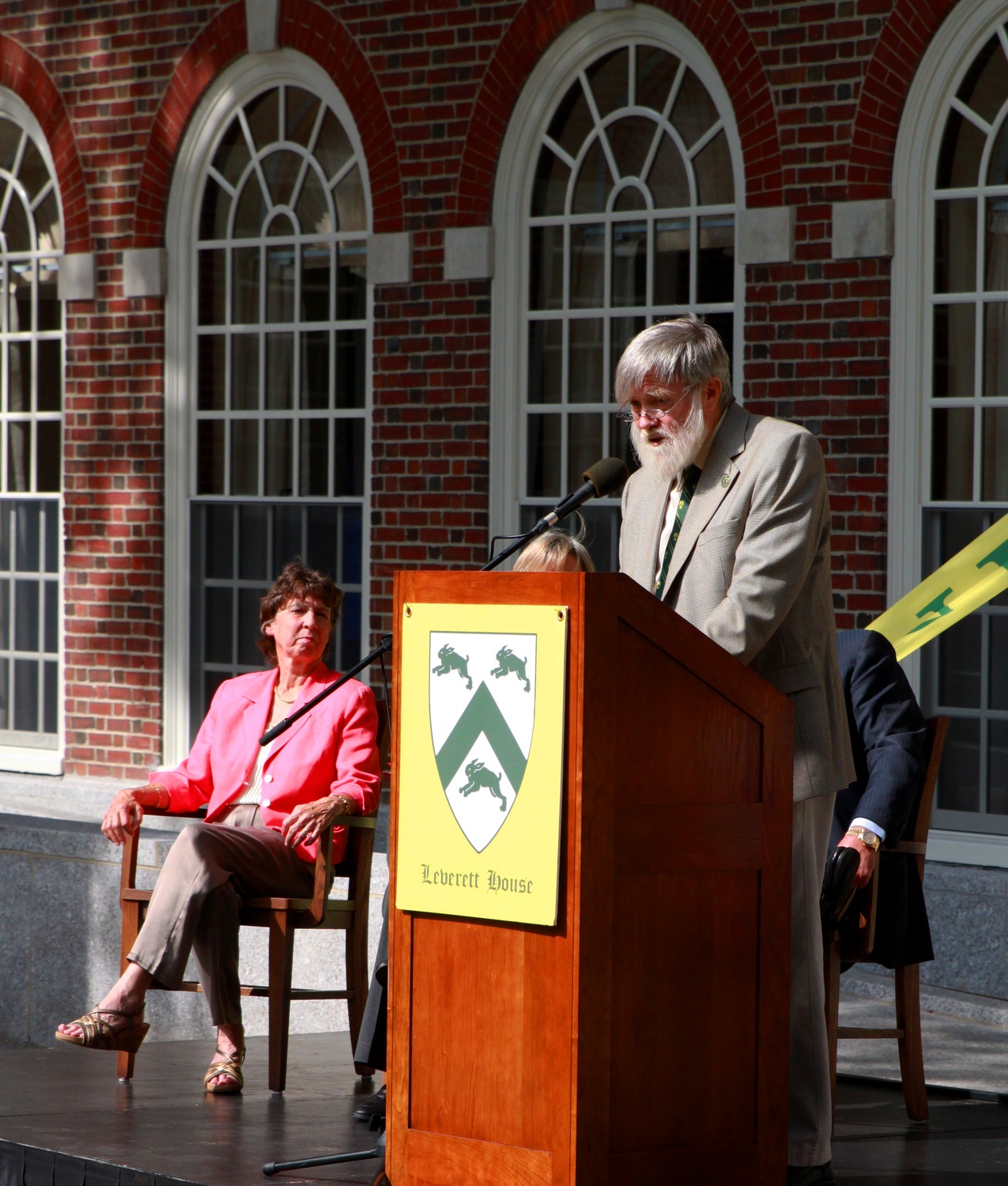 Leverett House Master Howard M. Georgi ’68 opened the ceremony by noting that the renovations of the dining hall and the surrounding spaces have “had a transformative effect on the most important task in the House, which is eating, and all of the intellectual and social activities that go with it.”

Georgi added that the new dining hall has become “too attractive to be resisted by students from other Houses” and estimated that dining hall staff had served more than 700 meals on certain nights. Georgi mentioned that he has decided to impose restrictions on the number of non-Leverett students that can eat in the House as a result.

Georgi introduced Leverett House Committee Secretary Casey M. Fleeter ’15, who spoke of her experience as a resident of McKinlock Hall. Despite drawbacks of renewal like the crowded dining hall and the loss of en suite bathrooms in McKinlock, Fleeter praised the constant connections with her fellow students in McKinlock’s long hallways and said the common rooms on each floor have become “very coveted territory.”

In her remarks, University President Drew G. Faust invoked the vision of her predecessor President A. Lawrence Lowell, Class of 1877, whose initial plan for the Houses brought students of different class years together in the hope of nurturing lifelong relationships in “communities based on shared experiences rather than accidents of birth and similarities of fortune.”

“From its beginning, the House plan embodied the very best of philanthropy, marrying vision and generosity to shape an institution’s future,” Faust said. “Now, here we are, nearly a century later, taking great care to preserve the character and the essential features of Harvard’s Houses as we reimagine them for a new century—all with the support of individuals who believe that bringing people together creates opportunities that simply would not exist otherwise.” 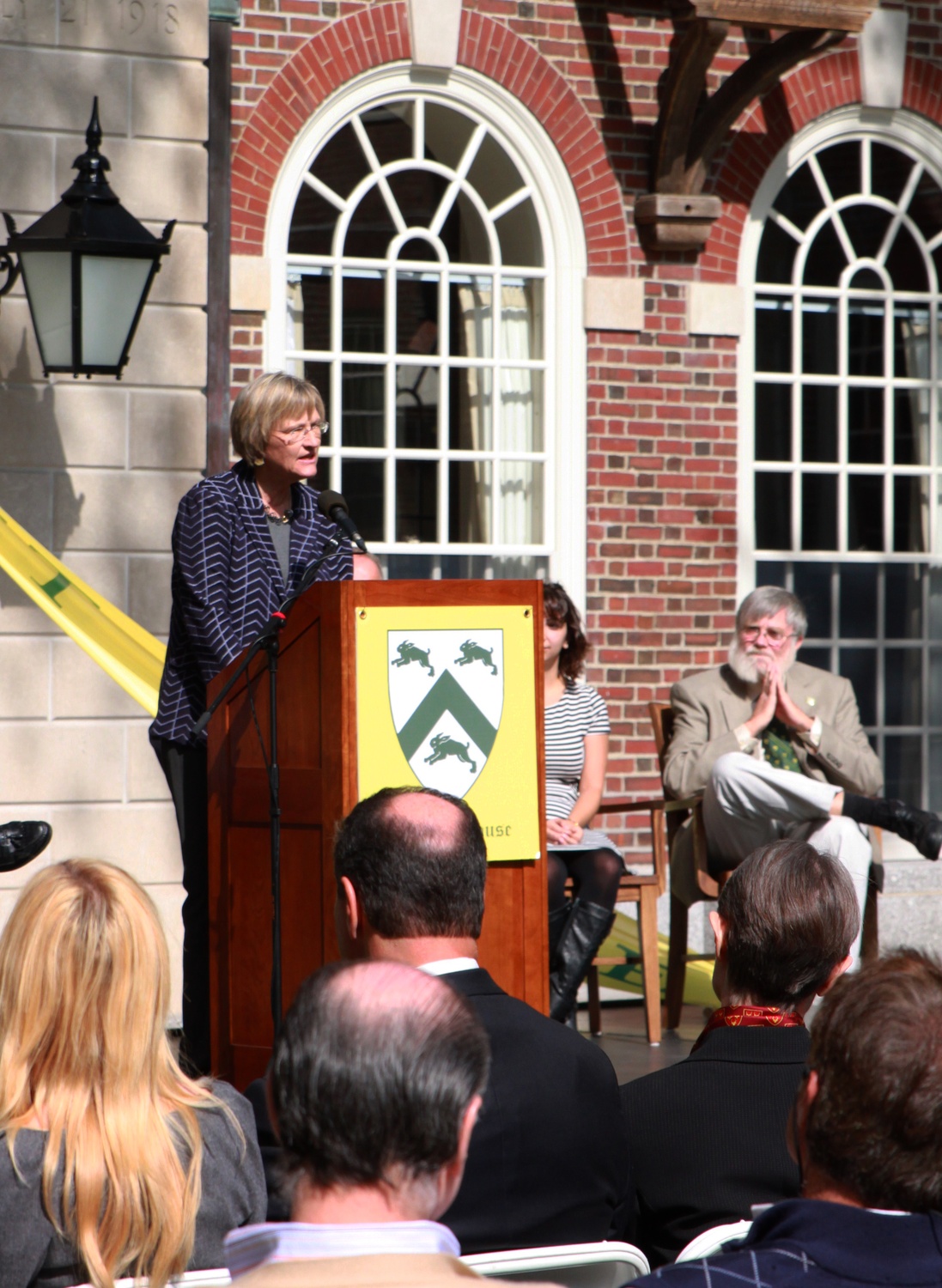 University President Drew G. Faust speaks in the courtyard of McKinlock Hall about the importance of House Renewal for Harvard as an institution. By Rohan W. Goel

One of the House Renewal co-chairs, Joseph J. O’Donnell ’67 emphasized the importance of the project in maintaining the College’s competitive position among peer institutions, particularly after Yale completed 13 years of residential college renovations in 2011. He reflected on his past as a resident of neighboring Quincy House and looked to the future of the renewal process, stating that “it’s mandated, absolutely mandated, that we continue our efforts with every House until the campus is entirely updated.

McKinlock’s renovation followed that of Quincy’s Stone Hall, completed in 2013 at a price tag of $45 million. Like that test project, Leverett’s modernization came in on time and under budget, O’Donnell noted. Though he did not give the project’s exact cost, it is expected to carry a higher final price tag than that of Stone Hall.

Dean of the Faculty of Arts and Sciences Michael D. Smith concluded the afternoon’s speeches by thanking the House Renewal co-chairs and more than 20 donors who now lend their names to renovated spaces in McKinlock.

After Georgi and his wife Ann cut the ribbon to officially reopen McKinlock Hall, they ceremonially passed “the House Renewal shovel” and a pair of hard hats to Dunster House Masters Ann and Roger B. Porter, who have inherited the next stage of the project with the reconstruction of Dunster underway just a few blocks from McKinlock. Dunster is the first full House to undergo renewal.

The ceremony was followed by optional guided tours of the House, an alumni gathering in the Masters’ Residence, and a student reception in the dining hall.