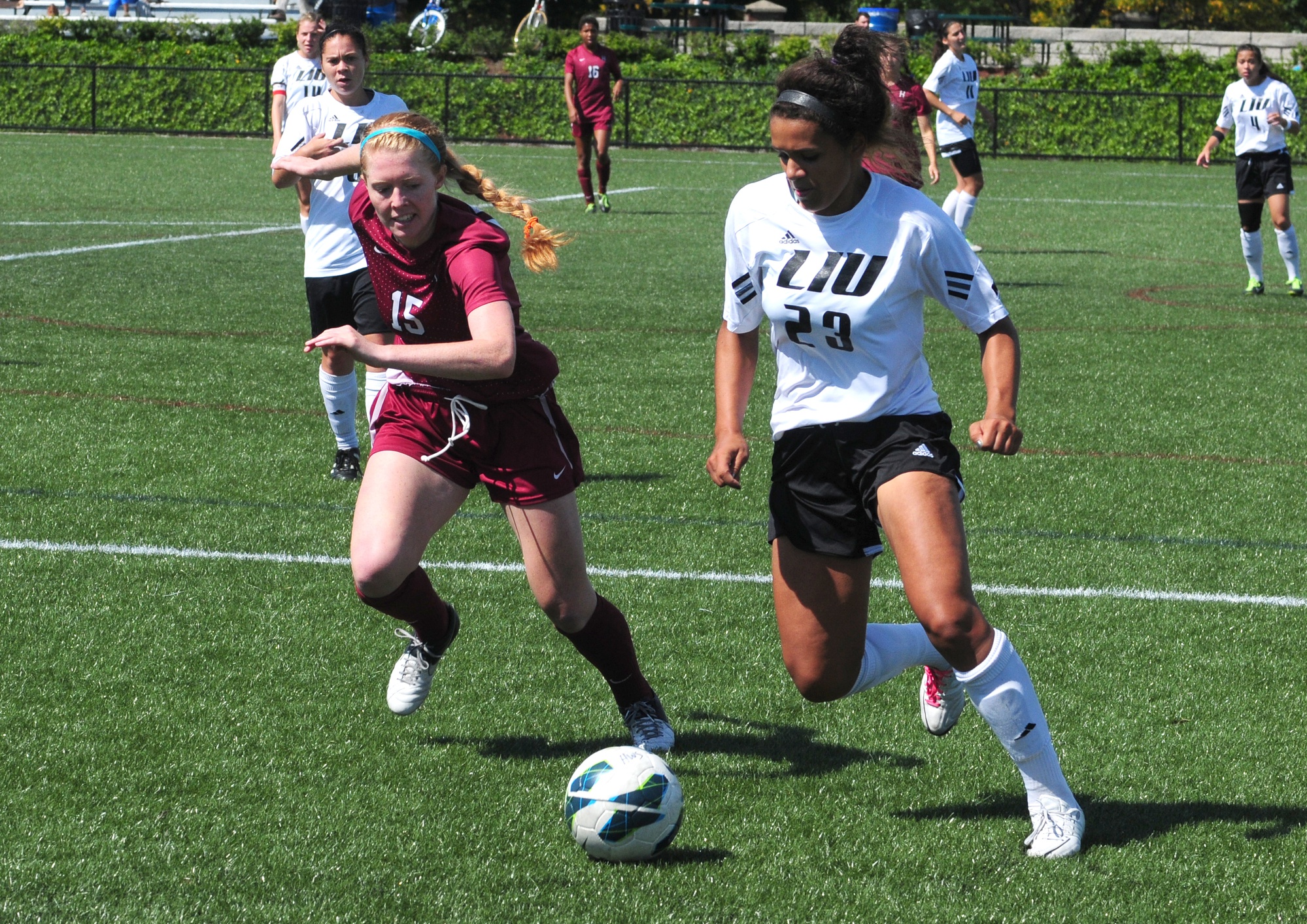 The Harvard women’s soccer team exploded for five goals against LIU-Brooklyn on Sunday in New York en route to its fourth shutout of the season, 5-0.

The Crimson (5-2-0), which scored only one goal in the three contests prior to Sunday afternoon, outshot the Blackbirds (0-9-0), 22-2. Harvard converted five of its 11 shots on goal for a 45 percent clip.

“It was nice to see the shots falling and the passes connecting,” co-captain Marie Margolius said. “The last couple of games we’ve been close, but we haven’t been able to finish off our chances. So it was great to see things going our way today.”

The scoring started in the eighth minute, when co-captain Meg Casscells-Hamby recovered a ball coughed up by LIU-Brooklyn’s defense and fired a shot past the goalkeeper from 18 yards out.

The Crimson fell into a rhythm after Casscells-Hamby’s goal. Just three minutes later, a header pass from sophomore forward Midge Purce set up junior forward Emily Mosbacher, who fired a shot from 10 yards out for her first goal of the year.

Mosbacher added a second goal in the 57th minute with a long-range strike that sailed over the goalie’s head to the far post.

“[Mosbacher’s] movement put her in really good positions and her finishing was excellent,” Margolius said. “Almost every shot she took was on frame. She’s been working really hard and it’s showing in her play.”

The Blackbirds managed to show some early offense and took the first shot of the game. In the fourth minute, sophomore forward Jenn Peters found an opening, but couldn’t get the ball past Crimson senior goalkeeper Cheta Emba.

The attempt turned out to be LIU-Brooklyn’s only shot on goal all afternoon. The team has struggled on offense throughout the season, scoring only two goals in its nine games. Today’s loss marked the seventh time that the Blackbirds have been shut out.

The Crimson’s early 2-0 lead enabled Harvard coach Ray Leone to substitute out many of his starters.

“This was huge for us,” Leone said. “Not only were we able to give other players great opportunities to get a substantial amount of playing time, but we were able to give starters a break in the action that they haven’t had.”

Even after five of the team’s starters came out in the 33rd minute, Harvard’s offense kept up the pressure in the remainder of the first half.

The Crimson took three shots on goal in the final 12 minutes of the period. Although LIU-Brooklyn junior goalkeeper Jessica Montrose saved the first two, she could not handle the third shot from senior midfielder Lauren Urke and Harvard went up, 3-0, heading into intermission.

“We’re a really deep team,” Margolius said. “So even when the starters came out, there was no difference in our energy level and quality of play.”

The Crimson continued to dominate in the second half with a combination of starters and reserves rotating in and out.

After Mosbacher recorded her second goal of the day in the 57th minute, Leone replaced the junior with sophomore forward Joan Fleischman. Within a minute of entering the game, Fleischman added a goal of her own to put Harvard ahead, 5-0.

The Crimson received contributions from throughout its lineup in the one-sided contest.

“We’re trying to be an overall strong team to [the point] where there is no focus on one individual player,” Leone said. “[The goals today] were scored by good teamwork, and that’s something we’re striving to do.”

Harvard will kick off its Ivy League season next weekend on the road against Penn. The Quakers finished second in the Ancient Eight standings last year, behind only the Crimson.

“I think going into Ivy League season we are starting to realize that every game and every minute of every game is really important in our preparation,” Margolius said. “So it was really great to see everyone bring that energy and that excitement the week before Penn.”