In Lead-Up to Allston Move, SEAS Running Short on Space

The School of Engineering and Applied Sciences is developing a new concentration in Electrical Engineering. Undergraduates hope that a more specialized program will help them in the job market.
By Francesca Annicchiarico, Crimson Staff Writer

Faced with increasing numbers of instructors and concentrators, administrators and faculty members at the School of Engineering and Applied Sciences say they are concerned about space availability in the years before portions of the school are slated to move to Allston in 2018. These space constraints, some say, may adversely impact hiring and research potential at SEAS.

According to SEAS Executive Dean for Administration Tim Bowman, the school has already converted underutilized classrooms into teaching laboratories and other spaces. While SEAS was able to meet most of its members’ needs for space thus far, there is now no additional space available, he said.

“For five years it will be a scramble,” Bowman said, adding that SEAS does not yet have formal plans for accommodating the increasing number of students and faculty members between now and the projected move to the Allston campus. Undergraduate enrollment in SEAS courses has increased by 137 percent since 2009, according to data provided by the school’s Assistant Dean of Communications Paul Karoff last spring.

To make room for other courses that are held in the same space, the school's students currently have to wrap up and store their experiments at the end of each laboratory session, said SEAS Executive Dean for Education and Research Fawwaz Habbal, who also lectures in applied physics.

“Everything is on wheels,” Habbal said, adding that being forced to store unfinished projects can be disruptive and harmful to the learning experience. “We try very hard to make it non-visible to the students.”

Besides teaching and learning, space limitations have also taken a toll on research endeavors and faculty hiring at SEAS.

“We’re out of space, and the faculty is still growing,” said Computer Science professor Harry R. Lewis '68, adding that space constraints influence the kind of faculty members that SEAS can hire.

In an interview last spring, SEAS Dean Cherry A. Murray said that the school is currently hiring mostly theorists rather than experimentalists as the SEAS community waits for more space to open up in Allston.

That mandate has hit some areas harder than others, Area Dean for Applied Physics Eric Mazur said. 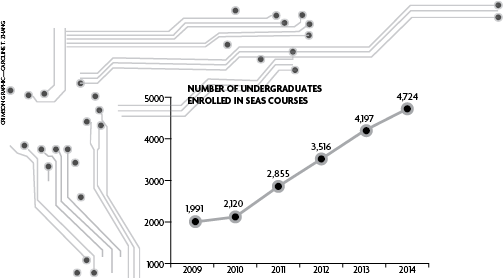 “Applied physicists all tend to be experimentalists,” he said. “They need to have a lab, and the lab needs to be put somewhere, but right now there is simply no space left.”

And with the Allston move just a few years away, SEAS cannot invest multiple millions of dollars in building new research laboratories in Cambridge, Bowman said.

“It’s not a good use of Harvard’s resources,” he said.

Habbal added that a number of SEAS faculty are currently sharing their laboratories, adding that the lack of space also shapes the kinds of research projects that can be conducted at the school.

“The next five years will be challenging,” Bowman said. “The good news is that everybody understands, and everybody is working together to make it work.”

—Staff writer John P. Finnegan contributed to the reporting of this story