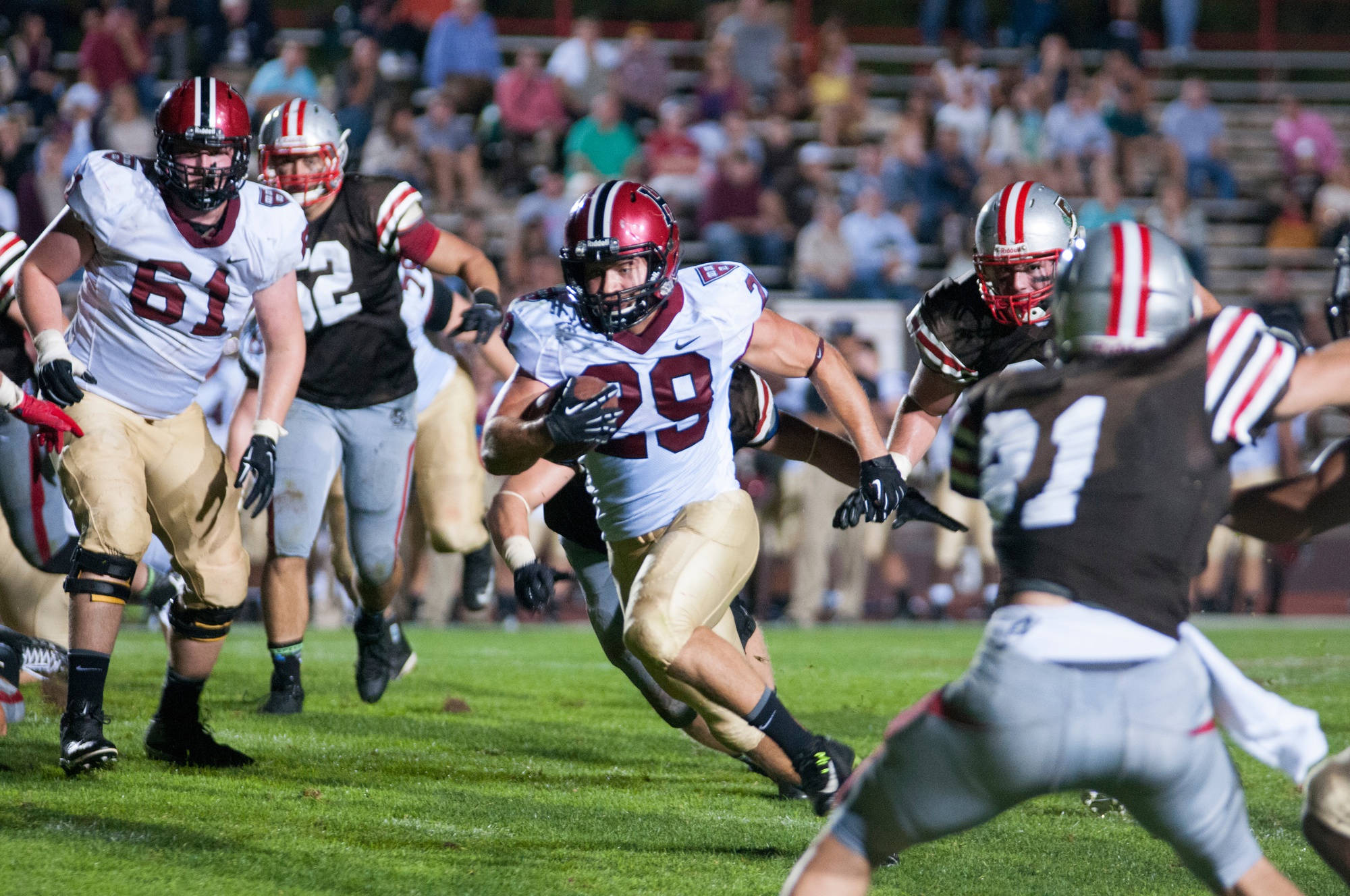 It may not have been the prettiest of victories, but the Harvard football team won its first sash in the pageant that is the Ivy League title race.

As the fireworks exploded over Brown Stadium, it was the Crimson (2-0, 1-0 Ivy) that wore the crown as Brown (0-2, 0-1) sulked into the darkness on Friday night. Despite occasional blunders and inexperience on both teams, Harvard launched a fourth-quarter comeback to beat the Bears, 22-14.

After the first score, a botched snap resulted in Crimson freshman quarterback Joseph Viviano III successfully running the pigskin in for the two-point conversion, but Viviano’s attempt was deemed no good by the officials for having already taken a knee and come up for the kick before the rush.

Problems on special teams continued. On Harvard’s first drive of the second quarter, a 37-yard field goal attempt by senior Ben Fallon sailed wide right, and while a 22-yard field goal try by classmate Andrew Flesher in the fourth quarter was good, Flesher’s final kick for an extra point was not.

Hiccups were not limited to special teams, as Brown and Harvard combined for a total of 10 penalties and over 100 yards yielded as a result, including a targeting call on Brown linebacker Michael Walsh that resulted in his ejection from the game and part of the Bears’ next contest.

“The tough thing about FCS Division I is that you don’t have instant replay where most of the time you probably need it [to] verify that,” said Murphy about the personal foul on Walsh. “It’s always a tough call, but it’s something that is foremost in the minds of officials and appropriately so.”

After playing little more than one quarter as signal caller coming into Saturday’s matchup, quarterback Scott Hosch took the reins from injured senior starter Conner Hempel for his debut Ivy start. The junior, who completed eight of 12 passes last weekend against Holy Cross, netted 234 yards passing and 20 on the ground this go-around.

Hosch proved himself a dual threat, working in and out of the pocket, as he passed for his first collegiate touchdown and ran in the final decisive score of the game.

With 2:11 left in the first quarter and the game still scoreless, Hosch dropped back from a shotgun formation and fired off a bullet to junior wideout Andrew Fischer. Fischer, hotly pursued by Brown defensive back Will Quigley, dove for the pass and connected in the far back left corner of the end zone, putting the Crimson on the board, 6-0.

Much later, with just over two minutes left in the contest, Hosch displayed his versatility by cutting right to an open route with an option run. Just three yards later, his touchdown scramble put the Crimson on top, 22-14, with a conclusive try.

“With the second touchdown, that was all the [offensive] line,” Hosch said. “That was a huge hole. I could have walked in.”

As there is still little indication of whether Hempel’s back injury will allow him to consistently compete in the coming games, Hosch may have to continue playcalling for the Crimson. His chance at playing time comes from an experience- and improvement-related jump from the third spot in the depth chart to the second.

“That’s just a credit to our strength and conditioning staff,” Hosch said. “This summer was a big summer for me. Being down in the three-position, I knew I had to improve my strength and my quickness.”

With Fischer easing back into play and classmate Paul Stanton returning as tailback after a week off with injury, two of Harvard’s more tested offensive weapons packed a punch when needed.

Fischer doubled both the number of catches and the yardage he notched last weekend, as Hosch tossed screen pass after screen pass to the third-year. Stanton posted 120 yards, his second-highest mark at Harvard, including a 43-yard breakaway touchdown run that saw him shake off a tackle in the scrum and run clear to Brown’s end zone.