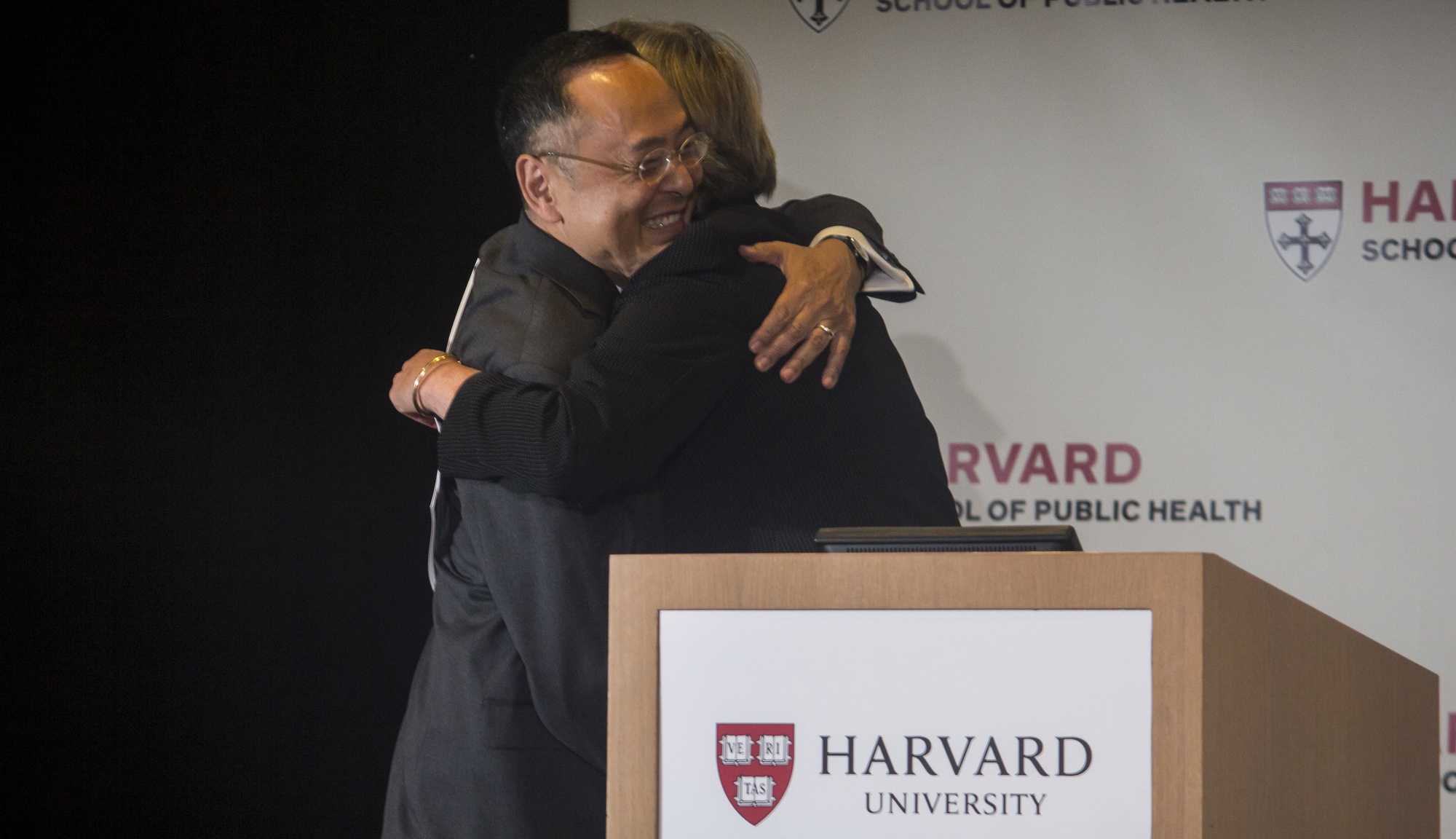 A charitable foundation run in part by Gerald L. Chan, an alumnus and longtime benefactor of the Harvard School of Public Health, has pledged $350 million to the school, the largest single donation in Harvard’s history, the University announced this afternoon.

In recognition of the gift, the University will rename the school the Harvard T.H. Chan School of Public Health, in honor of Chan’s late father. This is the first time in its history that Harvard has renamed one of its schools in recognition of philanthropy. Harvard’s Kennedy School of Government was named in memorial of former United States President John F. Kennedy ’40 in 1966. 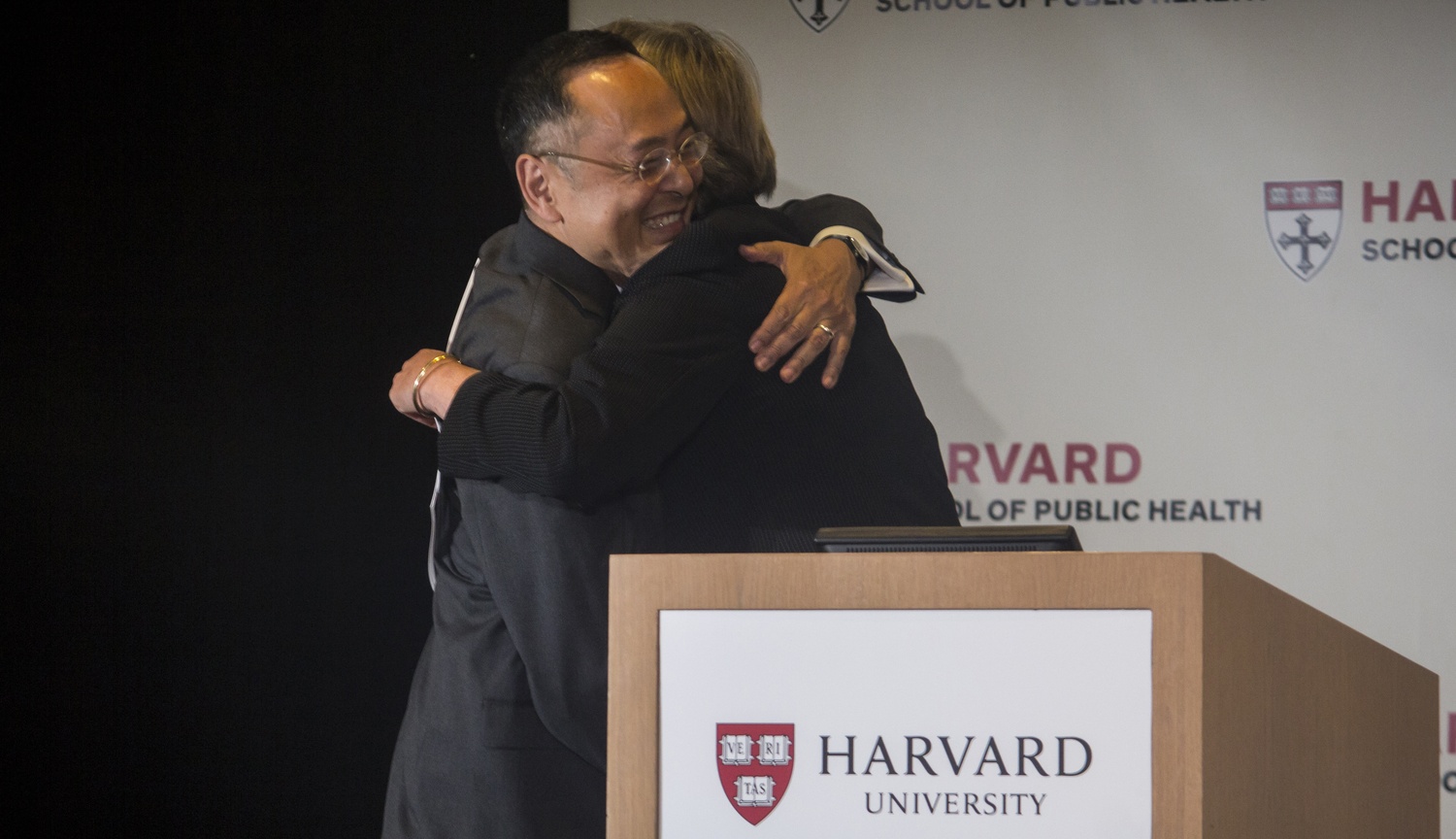 The gift comes from the Morningside Foundation, which is supported by Gerald Chan and his brother Ronnie Chan. It was officially announced at 12:30 p.m at an event at the School of Public Health in the Longwood Medical Area.

The gift is among the largest single donations in the history of higher education. Only a handful, including gifts of $1 billion to Vedanta University in India and $600 million to the California Institute of Technology, have been larger.

The gift’s principal amount of $350 million will be handled by the Harvard Management Company as a part of the University's endowment, and annual dividends will flow into the School of Public Health’s budget, which is heavily reliant on federal and non-federal sponsorship. As of June 2013, the school’s portion of the University's endowment total was valued at a little more than $1.1 billion.

Chan, who lives in Newton, Mass., has also quietly bought more than $100 million in real estate in Harvard Square in recent years. His father, after whom the school is named, founded one of Hong Kong’s largest real estate firms in 1960.

“I’ve been around Harvard for 40 plus years now, and I really feel that the School of Public Health has a very unique voice,” Chan said in an interview Friday. “There are parts of the school which speak for economic efficiency. There are parts for the school which speak for other approaches to solving problems…. I think the HSPH has a very unique voice which should be heard more clearly within the larger community.”

Chan and top University officials spoke with The Crimson under the condition that their remarks not be published until midnight Monday.

Chan said that he approached William F. Lee ’72, a longtime friend and the senior fellow of the Harvard Corporation, with a rough proposal for the gift about six months ago.

Chan’s gift comes seven months after Kenneth C. Griffin ’89 gave $150 million to the College and the Business School, with most of the money earmarked for undergraduate financial aid. Driven by gifts from Griffin and others, the Harvard Campaign—which launched publicly last September with a goal of $6.5 billion—has gotten off to a fast start. As of the end of this March, Harvard had raised $3.8 billion across all of its schools.

Julio Frenk, the dean of the School of Public Health, said last week that the money from Morningside will touch all areas of the school’s operations. He focused on four particular threats to public health, including pandemics like Ebola, environmental concerns such as pollution, humanitarian issues like poverty and collateral damage from war and violence, and inefficient systems of healthcare.

“[The Chan family’s] generosity will ensure we have the resources to continue to develop the most innovative solutions that will enable millions of people to live longer and healthier lives, now and in the future,” Frenk said.

Frenk said that the money will also fund the school’s continuing commitments to student accessibility and faculty development. He added that the school is considering introducing a series of research awards and grants, as well as new funding for non-tenured faculty to take sabbatical semesters, new support for big data computing and management, and a student loan forgiveness program.

“Student debt is my number one priority, as it has always been,” Frenk said.

University officials told The Crimson last week that, for a smaller institution like the School of Public Health, the Chan gift has the power to alter the school’s trajectory. The School of Public Health, which often sends graduates into less lucrative careers than some other Harvard schools, has traditionally had difficulty matching the fundraising clout of the College, Law School, and Business School. The school draws significantly from federal and non-federal sponsorship—sources that fluctuate and are often referred to as ‘soft money’—which together made up 70 percent of its budget in fiscal year 2013.

“We are very grateful that this school, with its strong public service mission, is going to have this kind of funding and support,” University President Drew G. Faust said in an interview. “The School of Public Health is so dependent on federal funding and soft money for such a substantial portion of its operating budget. It’s great to have some solid foundation apart from those soft money resources that we can depend on.”

Last year, the School of Public Health set a goal of $450 million for its portion of the Harvard Campaign at a ceremony also celebrating the school’s centennial. Frenk would not say if he plans to adjust the $450 million target, but he did commit to continuing the school’s fundraising campaign for the next four years.

—Staff Writers Amna H. Hashmi and Christine Y. Cahill contributed to the reporting of this story