“Clocks” Worth Your Time 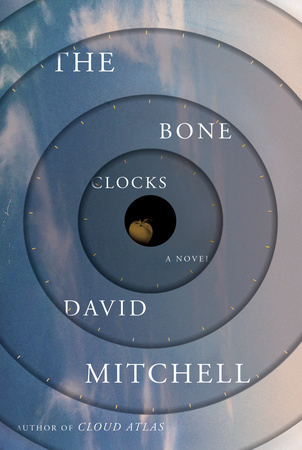 It is difficult for a single review to capture everything that is David Mitchell's “The Bone Clocks.” The novel is by turns family drama, political commentary, cultural history, fantasy epic, and post-apocalyptic vision. It is an elaborate concoction—more than 600 pages crammed full of detail, conflict, complexity, wit, and backstory. No single passage or quote could capture its narrative breadth and linguistic versatility.

“The Bone Clocks” is composed of six novellas, each potentially freestanding yet all closely intertwined. Ranging from the 1980s to the 2040s, from Iceland to Australia, each has a unique voice and its own internal conflicts. Yet, as these conflicts come to a head, others remain unresolved—nagging questions and half-explanations that echo through the life of central protagonist Holly Sykes. Together, the stories weave a riveting tale of Holly's entanglement in a centuries-long conflict between two opposing groups of immortals.

For readers of Mitchell's “Cloud Atlas” or “Number9Dream” this format will certainly ring a bell; multiple interconnected storylines seem to be his go-to narrative device. Yet “The Bone Clocks” proves that it would be a gross disservice to dismiss Mitchell as a one-trick pony. Clearly, he knows what he does well, and the intertwined stories provide him with a vast space to populate with richly developed and complex characters, myriad beautifully-realized settings, and a treasure trove of allusions and linguistic Easter eggs. “The Bone Clocks” takes the nested stories of “Cloud Atlas” and adds a dose of the quintessential English-ness that imbues “Black Swan Green,” another of Mitchell’s novels, then turns down a different track entirely to engage with traditional fantasy tropes. The result is anything but traditional.

Mitchell expertly blends the personal and realistic with the uncanny. Holly's matter-of-fact narrative voice combined with her initial, brilliantly written confusion and uncertainty about what she experiences renders the weird fantasy that intrudes into her life plausible. The initial cynicism of the other narrators, anchored in their own varied and richly realistic plot lines, cements this plausibility. When an immortal finally gives Holly the full account of the magical war raging around her, it seems a bit overdone and cliché: History Channel conspiracy theory meets Tolkienesque war between good and evil. But by this point the questions plaguing Mitchell's narrators have become so intriguing that an explanation is welcome, and the taint of its absurdity is drowned out by the suspense that has led up to it.

In writing his narrators, Mitchell treads a delicate line; each has a distinct voice that is completely authentic while still quirky enough to command attention. There is Holly, the epitome of teenage angst and rebellion, plagued by the mysterious “radio people”; Hugo, a Cambridge scholarship student with dreams of power and influence and a taste for perpetrating fraud; Holly's partner Ed, a “war-junkie” journalist torn between work and family; and Crespin, a novelist past his prime who nurses jealousy and pride amidst a crumbling personal life. Despite their various flaws—arrogance, bigotry, and sociopathic tendencies, to name a few—each commands sympathy, if not affection. Marius, an “atemporal,” as some immortals term themselves, also narrates a section; Mitchell has achieved the impressive feat of fitting centuries of life experience into a believable character. Holly, now in her seventies, returns to narrate the final section. As she reflects on her participation in the atemporals' war, the shifting glimpses of Holly from throughout the novel coalesce into a new voice—older, wiser, different, yet still connected to the teenage Holly.

Mitchell's deft use of language extends beyond the creation of vivid characters, offering many layers of linguistic enjoyment and playfulness. Ed's six-year-old daughter talks of his constant absences, mispronouncing his location: Baghdad becomes “Bad Dad.” Hugo delivers an entirely rhyming drunken soliloquy on his Cambridge peers: “power and money, stick together like Pooh and honey.” The novel is also peppered with literary allusions. Holly, channeling the voice of an immortal who once inhabited the body of an Aboriginal woman, delivers a monologue deeply reminiscent of Toni Morrison's “Beloved.” In a nod to Aldous Huxley's “Brave New World,” Iceland becomes a safe haven in the last chapter's post-apocalyptic landscape. Mitchell also toys with self-reference—Hugo tells Holly a story about buying his younger cousin Jason his first pack of cigarettes, paraphrasing a scene from “Black Swan Green.” In the hands of a less capable writer such references might have come off as effortful and presumptuous, but Mitchell blends them seamlessly into his prose, clever little inside jokes to share with his readers.

Of course, “The Bone Clocks” is not without flaws; the central conflict is a little too clear cut in terms of good and evil, rendering it slightly juvenile. But the nuance that permeates every other aspect of Mitchell's writing, from linguistic creativity, to brilliantly written internal monologues, to compelling and intriguing characters, obscures that insufficiency, creating a work of astonishing depth.