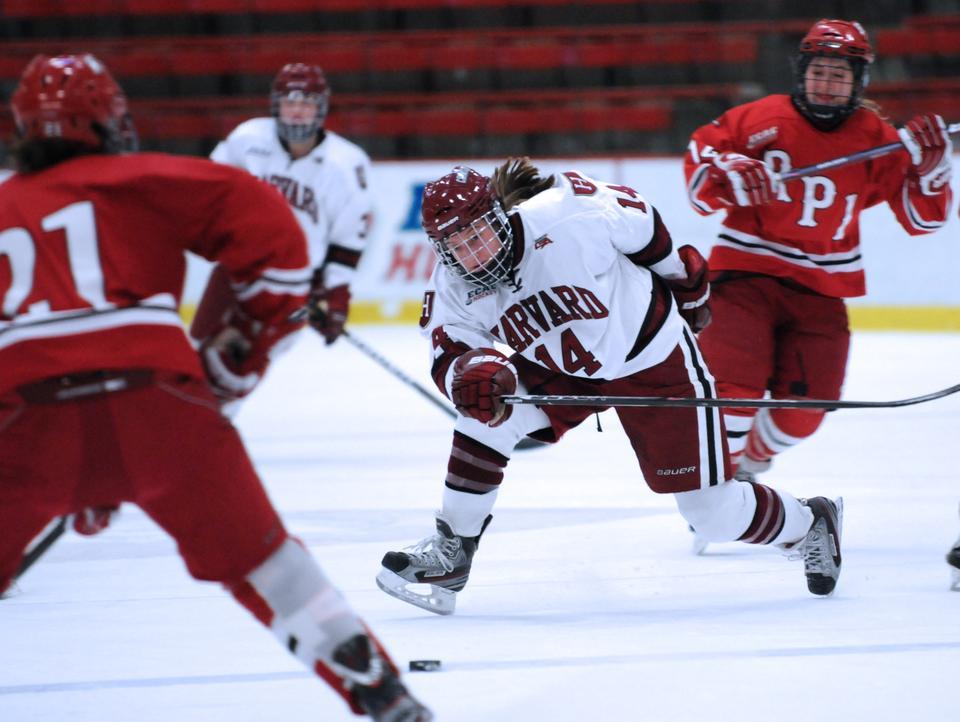 Senior Sarah Edney opened the scoring for the Crimson on Wednesday night against New Hampshire in a 4-1 victory. The goal was her third of the year.
By Sam Danello, Crimson Staff Writer

Then last year, there was recovery—so much recovery that Pucci skipped the Crimson’s 2013-2014 season to help Team USA win a silver medal at the Sochi Olympics.

This Wednesday against the Wildcats (4-16-1, 2-9-0 Hockey East), Pucci passed another milestone. With her second-period slap shot, the current senior not only put Harvard (12-2-2, 9-1-1 ECAC) up, 3-0, but also earned the right to celebrate her first collegiate goal in three years.

“It was exciting,” Pucci said. “I have been having a lot of fun getting out there again.”

But she spent little time romanticizing the moment.

“There are areas of my game that I can continue to brush up [on],” Pucci said.

A solid UNH defense and a larger-than-normal sheet of ice tested Harvard’s offensive patience. However, the No. 5/5 Crimson hung tough to score in the last six minutes of each period and claim a 4-1 win—the team’s 10th straight victory.

For the third game in a row, the Harvard defense did not concede a goal until the third period. Four minutes remained in the game by that point, and the Crimson still held a three-goal lead.

“[We shut out UNH by] using the size of the ice to our advantage [and] making hard breakout passes,” Pucci said. “I think the team is strong all around.”

After the hosts scored, senior Hillary Crowe responded with a goal of her own in the waning moments of the game. Senior forward Samantha Reber slipped a pass across the goalmouth to give Crowe a routine finish.

Defense became offense earlier on as well when a deflected pass in the defensive zone turned into a two-on-one opportunity for Harvard on the other end 14 minutes into the second frame.

Junior forward Mary Parker carried the puck herself, shot, and finished her own rebound. With her third goal in four games, Parker put the Crimson up, 2-0.

Harvard’s offense, which has come alive of late, is averaging six goals per game over its last four victories.

“We have talked a lot about driving hard to the net and taking off-angle shots,” Crowe said. “We have a lot of speed on our team, and Coach [Stone] has made a point that we…utilize it.”

But it did take 17 minutes and a determined solo effort to put Harvard on the board in the first period. After collecting the puck near her own goal, senior defenseman Sarah Edney streaked from end to end to slide a finish past the UNH goalie.

Despite this late flash, the Wildcats, losers of seven of their last eight games, played a close first period with the Crimson. Harvard tallied nine shots during this time; the University of New Hampshire tallied eight.

Part of the reason for this slow start was the abnormal size of the rink.

“It was a very different sheet of ice than we were used to,” Crowe said. “Our transition game wasn’t as dominant…. In the first period, we talked about simple adjustments that would give our team energy and speed in such a big and different rink.”

Such changes led to renewed energy, as the Crimson not only won the second frame, 2-0, thanks to the scores from Pucci and Parker, but also built a 13-3 shot advantage.

“The ultimate goal is winning a national championship, no question,” Crowe said. “However, the road to Minnesota is long…. We talk about taking a piece of every team along the way and staying true to the mentality that everyday is an opportunity to get better.”