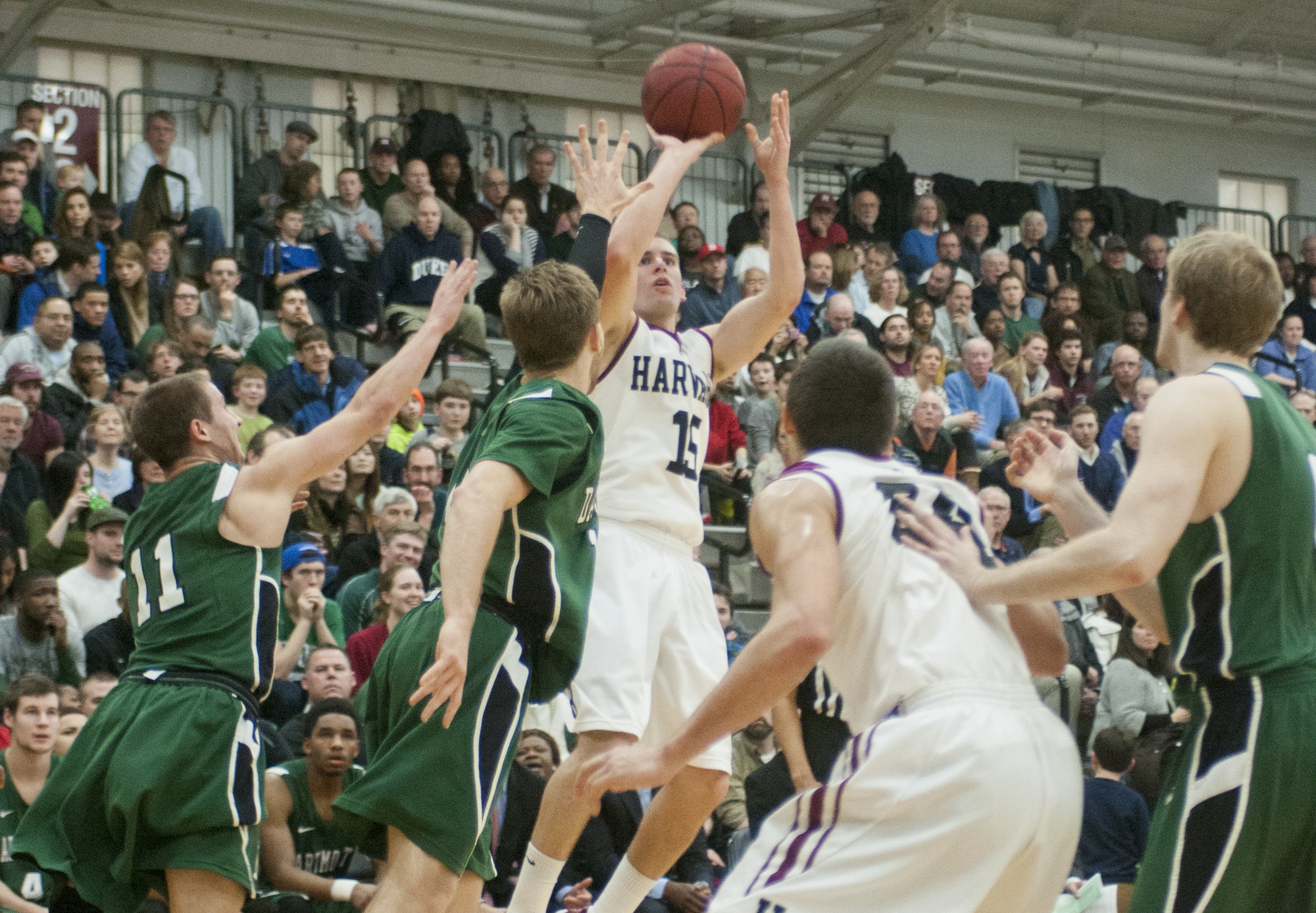 With a little over 13 minutes remaining, junior co-captain Siyani Chambers found a slicing Wesley Saunders streak across the lane. The senior wing received the ball before immediately sending it back to Chambers in the left corner. Chambers put the rock on the floor, giving Saunders enough time to sprint to the top of the key, where, moments later, he would catch, shoot, and drill a trey.

While the three-pointer gave the Harvard men’s basketball team a 43-29 lead over Dartmouth—its biggest advantage of the night—it was also the last highlight reel-type moment of the afternoon for the Crimson, as its highest high led to a series of lows, culminating in Dartmouth’s 26-2 run minutes later.

“We came out with a lot of energy to start the second half, but we didn’t sustain it—they kept chipping away and chipping away, and finally broke through,” Saunders explained. “And that was the difference in the game.”

The moment that Saunders’s shot went through the hoop, the Big Green turned to junior guards Alex Mitola and Malik Gill to shoulder the majority of the offensive burden for the remainder the half. And from that play on—the 13:09 mark of the second period—the backcourt duo outscored the entire Crimson squad, 20-18.

The offensive onslaught began on a Gill layup and continued when Mitola drilled a right-wing three to bring his team within seven. Two assists and a steal from Gill in the next few minutes enabled Dartmouth to tie up the ballgame for the first time since the opening period, and, fittingly, it was Gill who responded to Harvard’s first basket in six minutes, penetrating into the paint, converting the layup, and drawing the fifth foul on co-captain Steve Moundou-Missi.

With Moundou-Missi sidelined and the Big Green streaking, the Crimson wouldn’t score again for over three minutes, at which point it was too little, too late.

“They scrapped and clawed and we weren’t efficient,” Harvard coach Tommy Amaker said. “We had [] offensive droughts that hurt us.... We had chances to finish around the rim, we just didn’t do enough that we needed to do.”

While Harvard’s season thus far has been unpredictable at best, it was perhaps the most obvious commonality of its first 15 games that came back to hurt the home team on Saturday.

It was a turnover that led to Dartmouth’s game-tying layup with 7:44 to play and it was a turnover that gave way to a Big Green three-pointer that earned the underdog a double-digit advantage, 55-45, capping off the 26-2 run. These were just two of the 18 mistakes that Harvard committed on the afternoon, its most since its second game of the season against Holy Cross over two months ago.

“It was obviously a tough afternoon for us,” Amaker said. “It was very disappointing in terms of how we handled the ball and how we couldn’t finish.”

While Saunders, per usual, was the Crimson’s go-to man on both the offensive and defensive ends, pacing his team with 13 points, six rebounds, and four steals, he also had a game-high six mistakes, three of them coming in the span of four minutes amidst Dartmouth’s comeback effort.

The Big Green managed to score off of more than half of its opponent’s turnovers, tallying 21 points off mistakes and six in transition. Harvard, meanwhile, notched only seven points off turnovers, a discrepancy that ended up being the difference in the game.

As the clock ticked towards the final minute of play on Saturday afternoon, there was a feeling of déjà vu in Lavietes Pavilion.

Two years ago, these two teams matched up against one another in the same venue on the same Saturday before Harvard’s winter semester began. And then too, Harvard faced an unexpected deficit in the waning moments of the contest: it was down 10 with less than two minutes to play. But thanks to three clutch threes from then-co-captain Christian Webster and two layups from Chambers, Harvard was able to climb back into the game, force overtime, and ultimately earn the win.

“We were able to steal [that one],” Amaker recalled.

So, late in Saturday’s contest, when the Crimson found itself down 10 to Dartmouth once more and Chambers took the ball coast-to-coast, slicing with ease into the heart of the Big Green defense to score the layup, it seemed as if—maybe, just maybe—history would repeat itself, and Harvard would once again claw its way to the top of the scoreboard.

But Webster wasn’t on the court this time. He was on the bench, as an assistant coach, and Harvard managed to put in only two of the four three-pointers it attempted in the final minutes of play.

So just as Harvard’s 11-game winning streak against Dartmouth came to an end on Saturday afternoon, so, too, did the feeling of déjà vu.