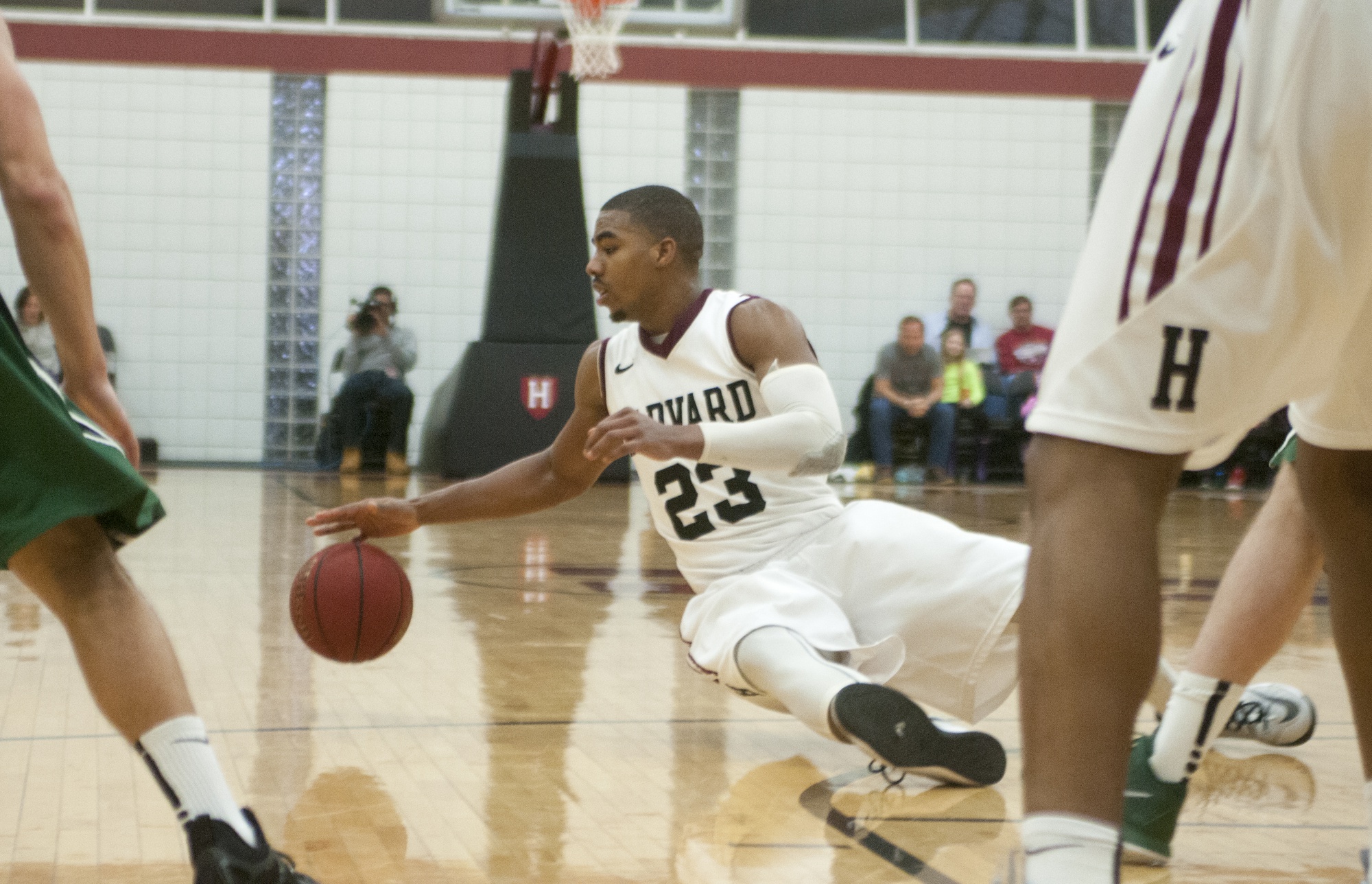 The Crimson turned the ball over 18 times in a loss to Dartmouth on Saturday. Senior wing Wesley Saunders had 13 points but also recorded six turnovers.
By David Freed, Crimson Staff Writer

One team threw a punch, the other threw a haymaker.

The finishing blow—a 26-2 second-half run by Dartmouth—left the Harvard men’s basketball team (11-5, 1-1 Ivy) outside the top two teams in the Ivy League for the first time since 2010. After taking a 14-point lead to seize control of the game, the Crimson came away with points on just one of its next 15 offensive possessions.

After his team fell behind early, 15-10, Dartmouth coach Paul Cormier changed the complexion of the game by inserting reserve point guard Malik Gill. Two point-guard lineups of Gill and junior Alex Mitola (18 points) outscored the Crimson by 19 points over a span of 14 minutes, with Gill suffocating senior wing Wesley Saunders (six turnovers) during the deciding stretch.

“They are both outstanding ball handlers and penetrators,” Amaker said. “Mitola being an excellent three-point shooter, he can stretch you, and I think Gill was a difference maker in the game. His energy and his defense—he was very scrappy. He didn’t back down from our guys.”

Overall, the Big Green defense took advantage of a turnover-prone Harvard squad. Dartmouth forced 18 turnovers for the game, turning them into 21 points on the offensive end.

The Big Green had 28 points in the paint, turning the Crimson’s size advantage on its head with aggressive ball movement that left Harvard defenders out of position. The Crimson had 24 fouls for the game, and Dartmouth had nearly twice as many points behind the free throw line (22) as behind the three-point one (12).

Harvard appeared to have put the game away with a 15-4 run to open the second half, with Saunders nailing a wide-open trey to give the Crimson a 43-29 lead and bring the crowd to its feet.

But Dartmouth was undeterred. Gill quickly blew past his mark for a layup and found junior forward Tommy Carpenter two possessions later for a layup that cut the lead to 10. The Big Green would then score on five of its next seven possessions, tying the game at 43 on a Gabas Maldunas layup and taking its first lead with 6:39 remaining on a three-point play by Gill.

The layup was doubly damaging for Harvard, with co-captain Steve Moundou-Missi picking up his fifth foul on the play. With the senior (eight points, six rebounds) on the floor, the Crimson outscored Dartmouth by six and shot 48 percent. In the other 22 minutes, it shot 32 percent and was outscored by 15.

With Moundou-Missi gone, Harvard struggled on both ends. The Crimson gave up eight quick points—including two dagger threes by rookie guard Miles Wright—to fall behind by 10, 55-45, with 3:21 to go. Harvard closed to within eight before beginning to foul with 1:38 to go, but it got no closer. Mitola hit ten free throws in the final 90 seconds to ice the game and send the Big Green to its first win over Harvard since 2009.

“You could see how they played the whole game, they definitely wanted to win way more than us,” Saunders said. “We just got to expect every team’s best shot, especially in the Ivy League now, because we’ve been so dominant for the past four years. We just got to be ready for a battle every night.”

One of the few bright spots for the Crimson offensively was the play of senior forward Jonah Travis. Pushed into action due to Harvard’s foul trouble, Travis had nine points and three rebounds in 16 minutes, going a perfect two-of-two from the field and five-of-five from the free throw line.

“I thought Jonah probably played the best of our post players,” Amaker said. “We need a variety of different guys to give us contributions … I thought Jonah gave us good energy and scrapped for us.”

—Staff writer David Freed can be reached at davidfreed@college.harvard.edu.