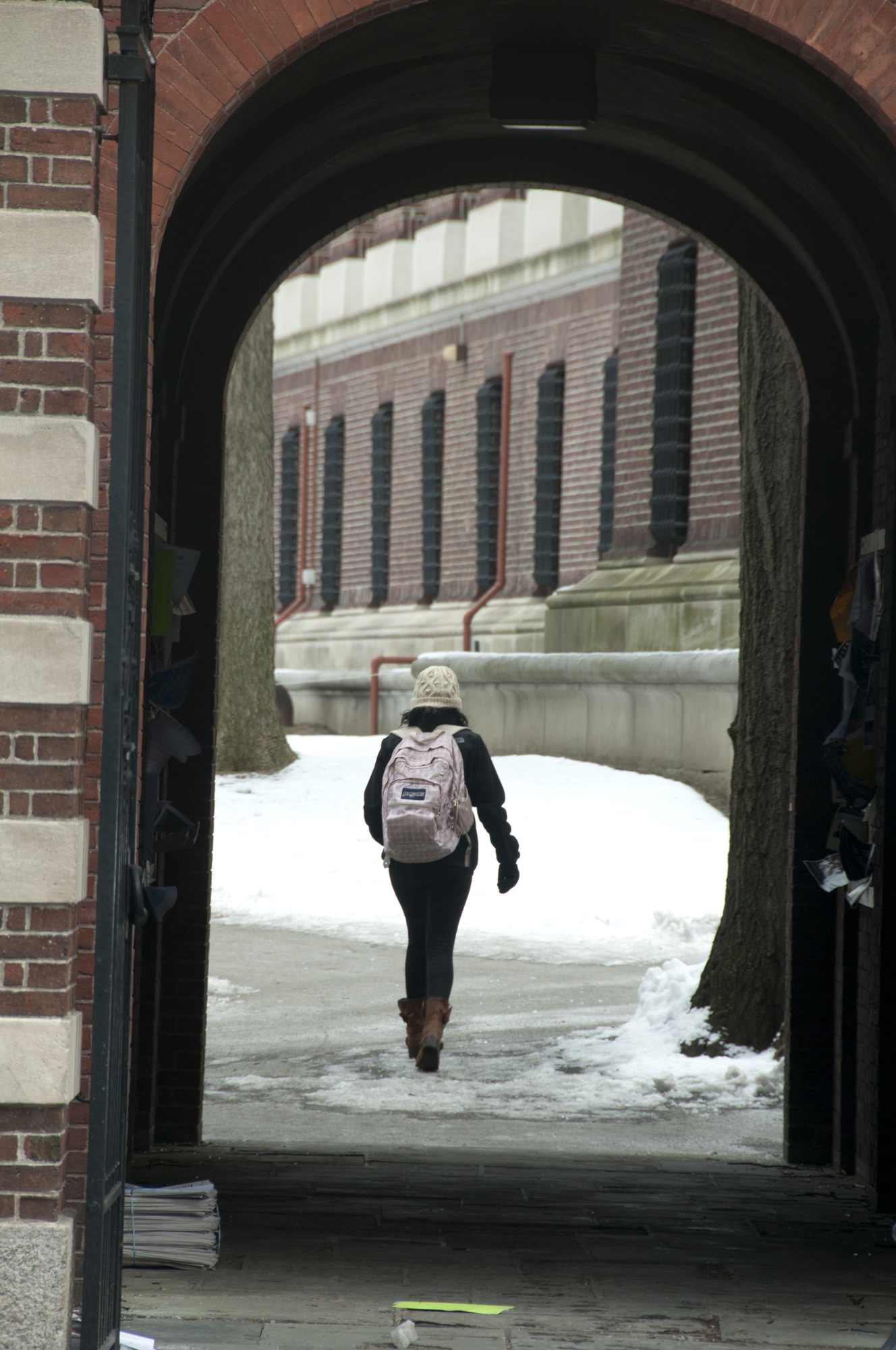 A student makes her way to class Monday, ducking under an archway near Widener Library. In anticipation of a looming and "potentially historic" snowstorm, administrators canceled Tuesday class after students had gotten a taste of classes during the first day of shopping week Monday.
By Melissa C. Rodman, Crimson Staff Writer

The start of course shopping week was disrupted by the cancellation of all Faculty of Arts and Sciences Tuesday courses and sections in anticipation of a “potentially historic” snowstorm. Despite the interruption, Friday’s study card deadline will not be extended, and while some undergraduates said Monday that they appreciated the day off, others worried about the more limited time to determine their course schedules. 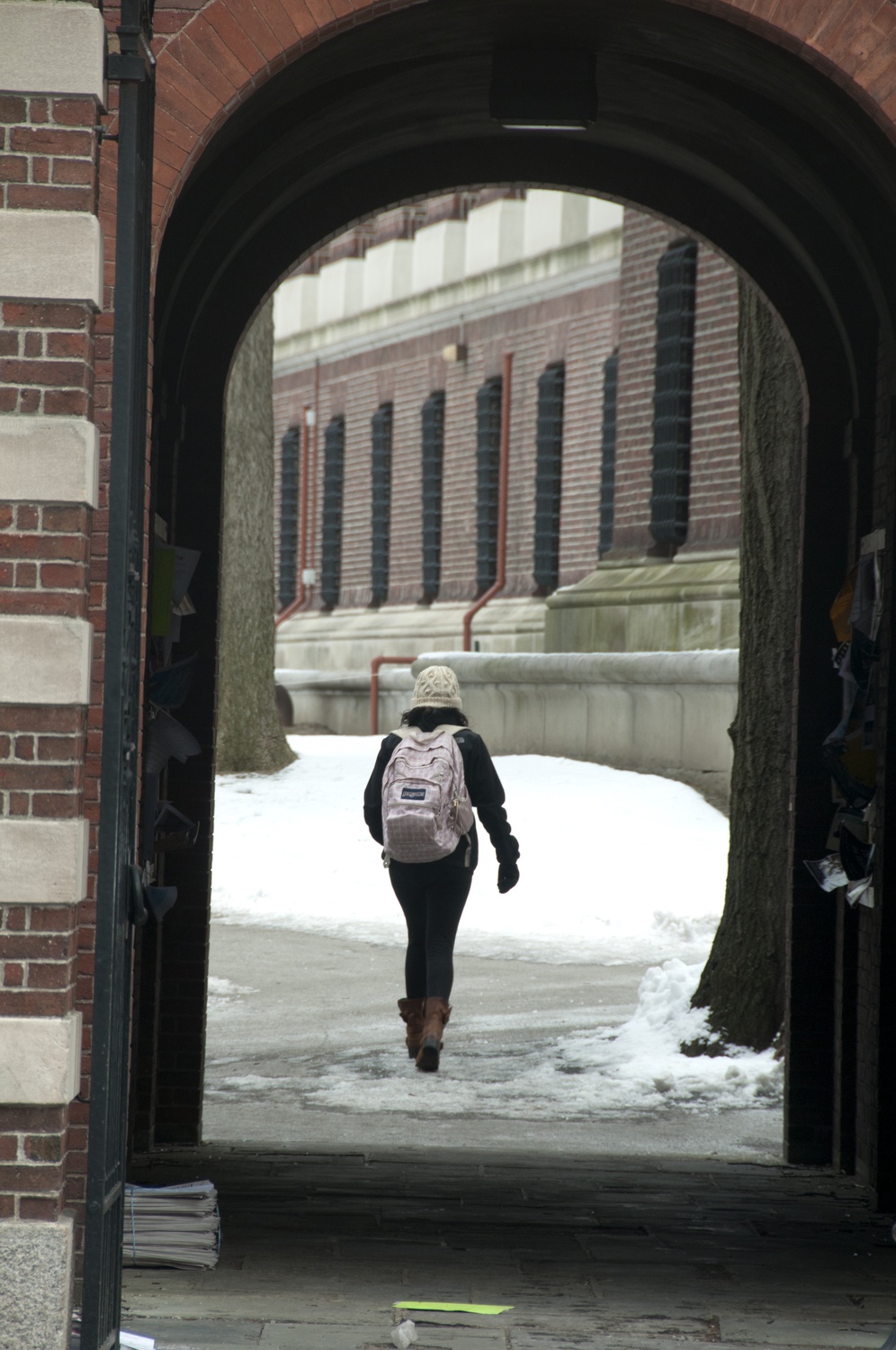 A student makes her way to class Monday, ducking under an archway near Widener Library. In anticipation of a looming and "potentially historic" snowstorm, administrators canceled Tuesday class after students had gotten a taste of classes during the first day of shopping week Monday. By Anneli L. Tostar

Dean of Undergraduate Education Jay M. Harris told College students in an email Monday afternoon that the study card deadline would not be postponed, acknowledging the challenges the week’s scheduling disruptions might create.

“[W]e are mindful that this deadline may present you with difficulties, especially if you were thinking of enrolling in a course that meets on Tuesday only,” Harris wrote in the campus-wide email.

In a separate email to The Crimson, Harris wrote that the deadline will not be adjusted because of campus-wide, logistical plans.

“We are keeping the listed deadline because there is a good deal of work that needs to be done over the weekend to adjust section sizes, rooms assignment, etc.,” Harris wrote. “If we waited until after next Tuesday we run the risk of delaying section meetings for a week, processing TF appointments, and getting courses into the right rooms.”

Without sampling Tuesday courses, some students raised concerns about how they will work out the details of their academic semester.

Kevin H. Xiong ’17 echoed Coleman’s sentiment, saying that he will not be able to shop overlapping courses.

“I was planning on splitting up my schedule by shopping one course on Tuesday and a course that met at the same time on Thursday,” Xiong said.

Students who plan to enroll in cross-registered courses face an additional burden since Harvard’s other schools do not have the same shopping week structure as the College, prompting some to worry about staying on top of course material.

“It feels harder to catch up because we’re already well into the course reading,” said Caitlyn E. Hayes ’15, who is shopping several classes outside the College. Hayes said that she hopes the Registrar extends shopping week because she wants to attend a cross-listed course which meets only on Tuesdays.

Other students, however, are pleased by the snow day and the free time they have gained.

“It just gives us an extra day to ease back into things,” Claudine S. Cho ’15 said. “It’s senior spring for me, so it’s not too big of a problem.”

Since many classes already have sections set, Tasnim Ahmed ’17 said that her shopping week plans will not change too much.

“I think most people are happy with the day off and are not too concerned,” she said.

Harris told The Crimson that students should not fret about the study card deadline. “We want students to take the time to pick the classes that interest them the most,” he wrote. “If they are interested in any Tuesday-only class they should feel no pressure to enroll in something else. Their Resident or House Dean can guide them.”