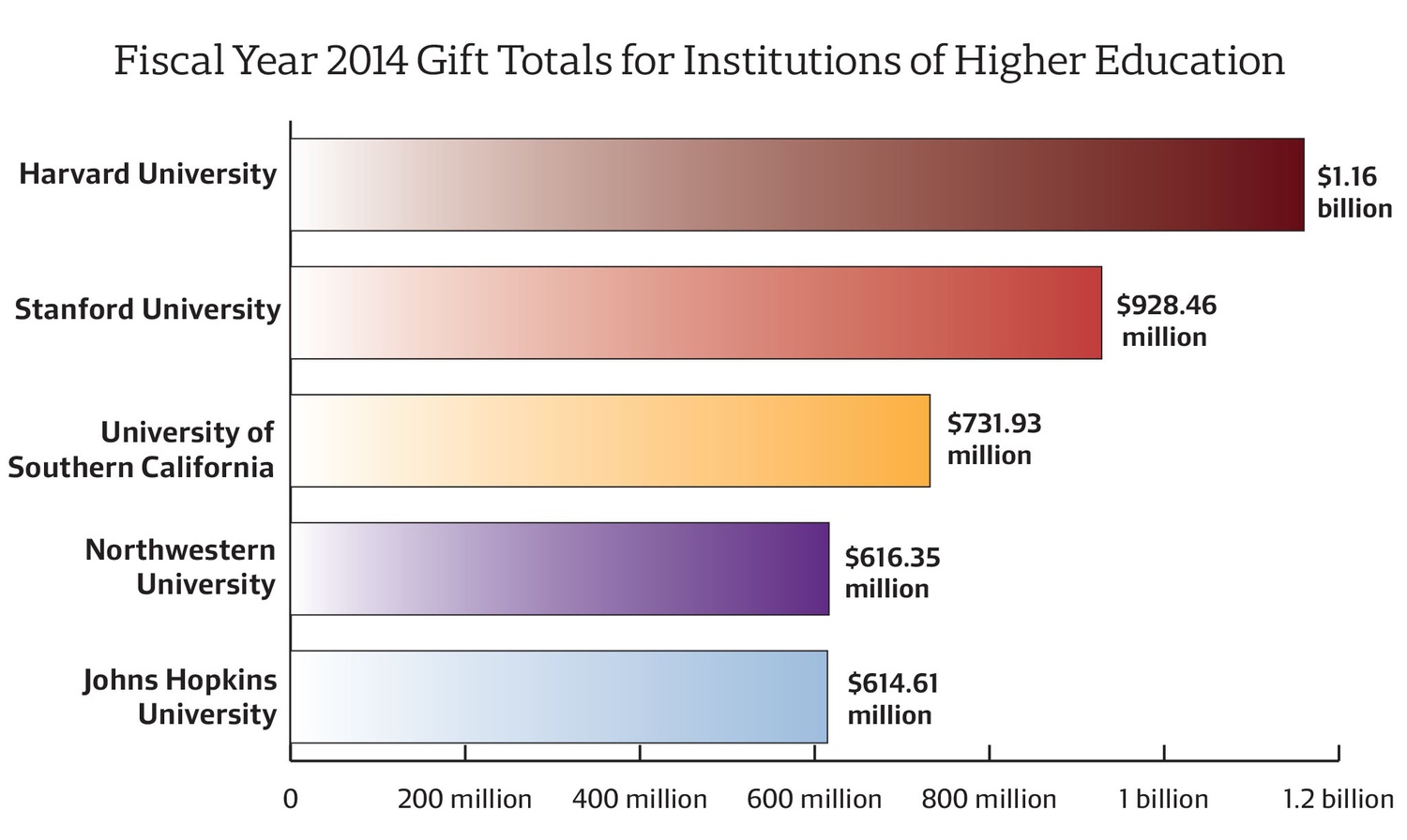 Harvard posted a record-breaking total of $1.16 billion in gifts in Fiscal Year 2014, according to a survey by the Council for Aid to Education. By Katherine R. W. Hebb
By Mariel A. Klein and Tyler S. B. Olkowski, Crimson Staff Writers

For the first time since 2004, Harvard outraised Stanford in Fiscal Year 2014, posting a record-breaking total of $1.16 billion in gifts, according to a survey by the Council for Aid to Education. Stanford raised $928 million, according to the school’s annual financial report.

The announcement of the historic total comes in the first public year of Harvard’s capital campaign, which launched in September 2013 and aims to raise $6.5 billion. That total would be the largest fundraising effort by an institution of higher learning, exceeding Stanford’s $6.2 billion campaign, which concluded in 2011.

In FY 2012, Stanford became the first institution of higher learning to receive over $1 billion in gifts in a single year, bringing in $1.035 billion. Harvard’s historic year marks only the second time that a university has eclipsed the billion dollar benchmark in one year, raising the most money in a year by any school ever.

“Our alumni and friends have been extraordinarily generous with their time and resources from the moment The Harvard Campaign began,” Tamara E. Rogers ’74, Harvard’s vice president for alumni affairs and development, wrote in an emailed statement. “The volunteerism and support from around the globe will make a difference for generations to come.”

While the amount is the most raised by a university, it remains unclear what the number means internally at Harvard, according to Frederick M. Hess, the director of education policy studies at the American Enterprise Institute.

“[University] President [Drew G.] Faust is going to say that this is a phenomenal start to the campaign,” he said. “Whether that is true...is only something she and the people with the internal benchmarks will ever know.”

Harvard raised 45.9 percent more in 2014 than in 2013, the survey reported. The largest gift to the University in the FY 2014 cycle was $30 million. The record year does not include Harvard’s largest-ever pledge of $350 million made by Gerald L. Chan to the School of Public Health, which was announced last September.

While some see Harvard and Stanford as yearly competitors for the top spot on fundraising and endowment lists, Ann E. Kaplan, the director of CAE’s survey, pushed back against the notion of an arms race between the two universities.

“It doesn’t matter who’s number one and who’s second—they both raise so much money and have programs that merit so much support,” she said. “I don’t think [Harvard’s] reason for setting higher goals is to be better than Stanford.”

Hess, however, said he was “less surprised” by Harvard’s record year. In previous capital campaigns, Harvard has tended to out-fundraise the competition.

“Between inflation and the escalating effectiveness with which these elite institutions are pursuing these gifts, it’s a record I had expected to be broken,” Hess said.

Still, Harvard supporters see the news as an indication of the capital campaign’s strength and impact.

“It is by supporting the work of Harvard’s remarkable faculty and students that the campaign will have its greatest impact,” University Treasurer Paul J. Finnegan ’75 wrote in an email.