If Approved, Law School Will Investigate Student Complaints Instead of Central Office 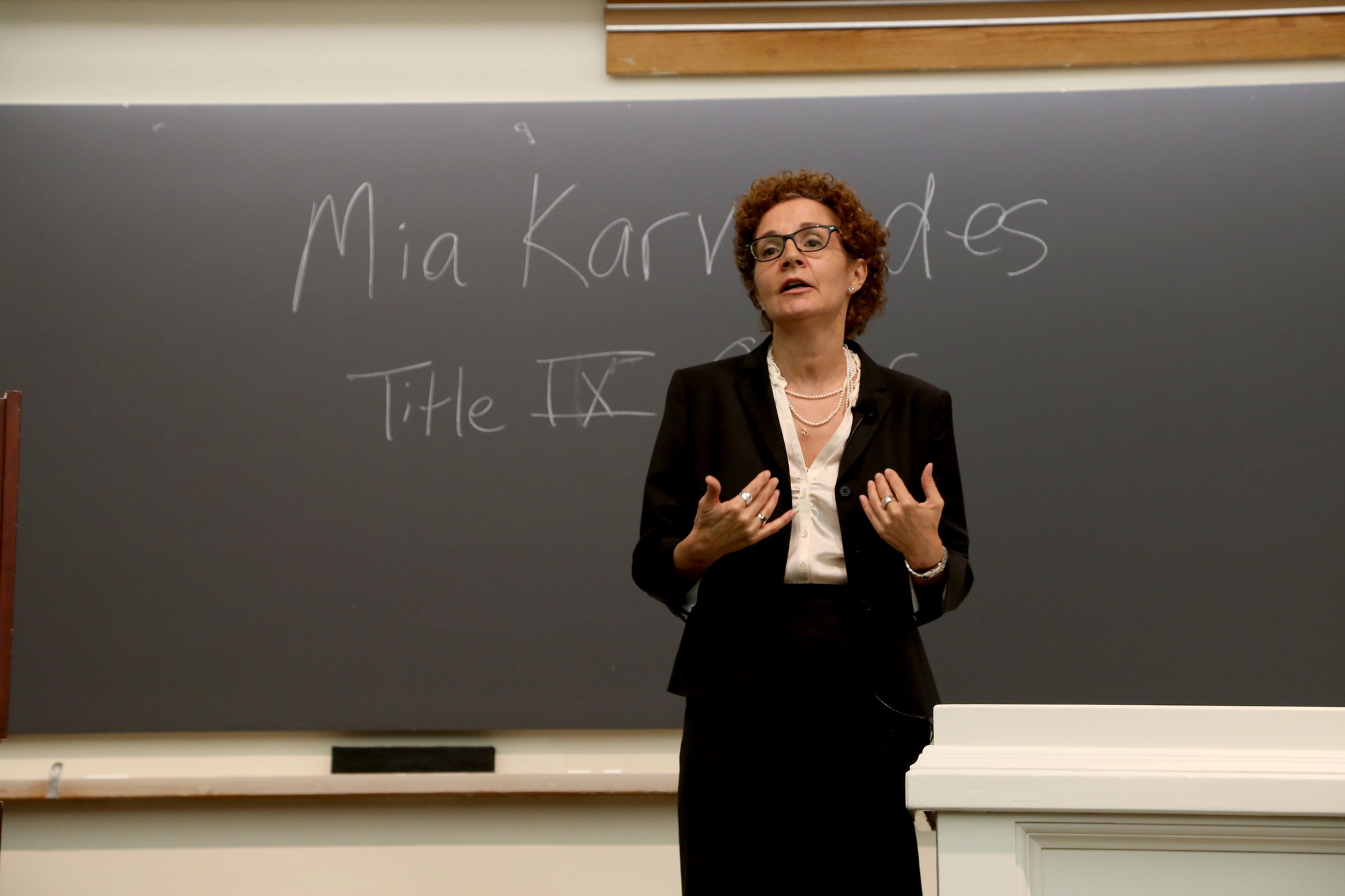 In a major break from the University’s newly centralized approach to handling sexual harassment, Harvard Law School has adopted a new set of procedures that, if approved by the federal government, will incorporate a school-specific Title IX unit to investigate its own student sexual harassment cases and offer legal counsel to all parties involved.

When Harvard unveiled its first-ever University-wide policy and accompanying procedures to address sexual harassment this summer, University President Drew G. Faust and other officials praised them as centralizing Harvard’s management of the issue, although they have drawn criticism from some professors at the Law School. The policy established a definition of sexual harassment to apply to all of Harvard’s schools, and the procedures created a central office, the Office for Sexual and Gender-Based Dispute Resolution, to investigate complaints against students across the entire University in an effort to bring consistency to the process.

If the Law School’s new procedures are implemented, however, the University’s approach to investigating sexual harassment complaints against students will no longer be consistent across all of its schools.

While the Law School, under new pending procedures it adopted Dec. 18, will continue to follow the University’s sexual harassment policy and definition, it has opted to create its own set of procedures for investigating alleged policy violations in lieu of the University-wide process. They are not yet implemented because the Department of Education’s Office for Civil Rights must first approve them, as part of an agreement administrators entered with the government after it found the Law School in violation of Title IX late last month.

Under the pending procedures, instead of reporting student sexual harassment complaints to ODR for investigation, the Law School will conduct investigations in-house, by or under the supervision of their own Title IX unit, consisting of a Title IX coordinator and two deputies. Both complainants and respondents may consult with advisers, including an attorney, throughout the process; the procedures stipulate that the Law School “will provide financial assistance to parties unable to afford an attorney who would like to do so.”

Under the University-wide procedures, personal advisers from the University, including academic advisers, may advise students throughout the investigation process, but cannot speak for their advisees. Attorneys are barred from submitting statements for students, although students are “advised” to consult with a lawyer if a complaint has criminal consequences. 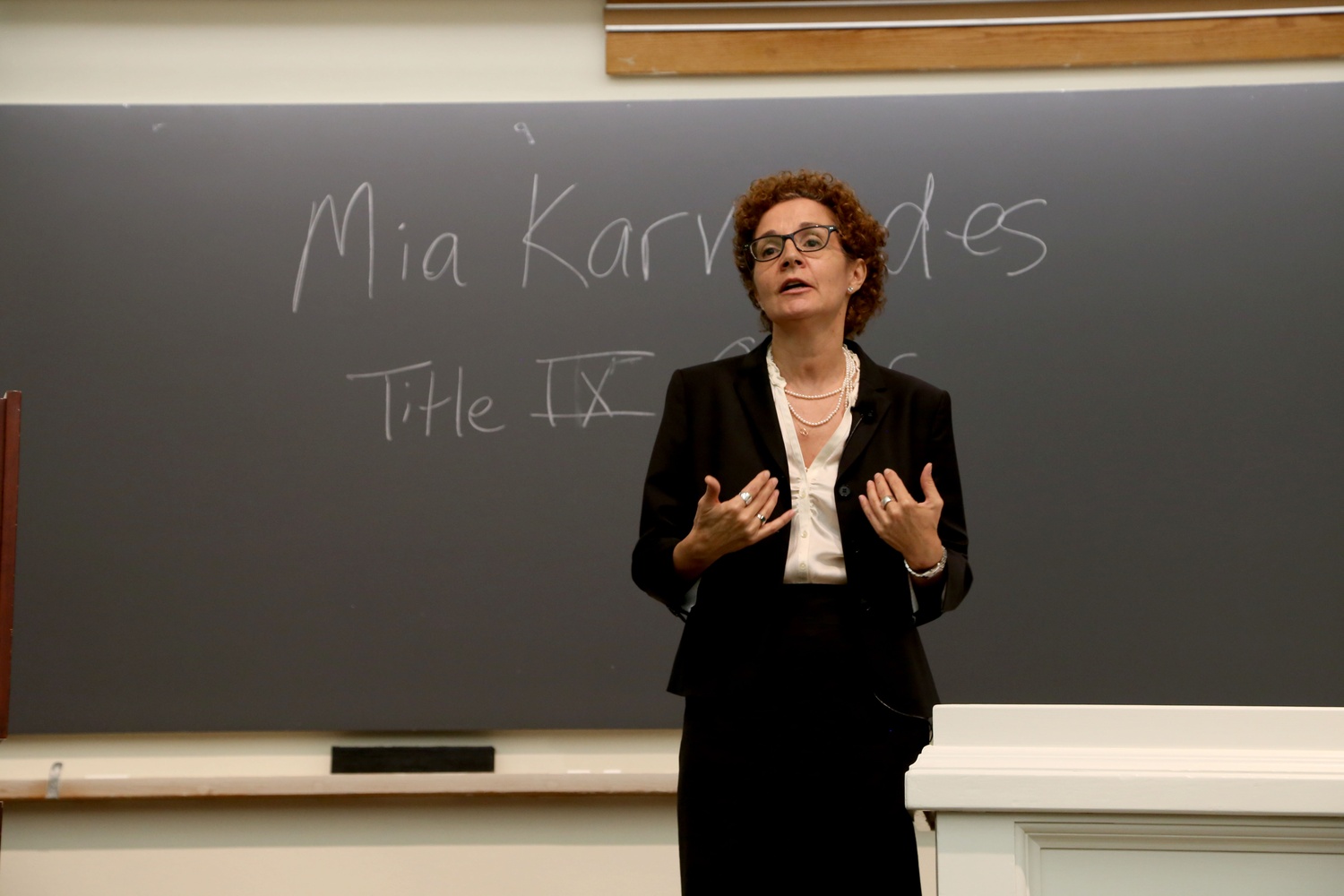 According to its new, pending procedures, after the Law School Title IX Unit has determined that the respondent may have violated the University’s sexual harassment policy, an adjudicatory panel composed of three trained professionals unaffiliated with Harvard will issue a final decision. The panel will also hand down any appropriate sanctioning, which may range from warnings to expulsion.

This process differs from the University-wide procedures, in which a professional ODR investigator and a designee from the school investigate the case and determine whether a policy violation occurred before leaving the individual school to hand down sanctions.

Also unlike the University-wide process, the Law School’s pending procedures incorporate hearings into the adjudication process if any party in the case desires one. While the adjudicatory panel will determine the exact “conduct of the hearing,” the parties—with each up to two advisers, one of whom may be an attorney—will have an “equal opportunity” to respond to results of the investigation and to present witnesses and evidence, although they “may not directly address each other” during the hearing.

The new procedures also allow for each party to “request an impartial appeal,” which will be decided by trained Law School faculty members on its Administrative Board, rather than the original adjudicatory panel.

A committee composed of tenured faculty members will oversee several aspects of the new procedural process, including investigation methods and “reasonable regulations for compensation of attorneys on behalf of students,” according to the pending procedures.

A DEPARTURE FROM CENTRAL

These procedures, which the Law School faculty approved on Dec. 18, were the product of a roughly two-month process that began when Law School Dean Martha Minow asked Law School professor John Coates to chair a faculty committee “to develop ‘local’ procedures for Harvard’s Title IX policy,” Coates wrote in an email. According to Coates, the committee met with law students, faculty members, and University administrators, including University Title IX Officer Mia Karvonides, throughout the two-month period.

Coates wrote that the procedures were shared with OCR during the drafting process and that he expects that they will be implemented in the coming months. The resolution agreement between Harvard and OCR, signed Dec. 23, stipulated that the office would approve or make additional recommendations to the procedures within 45 calendar days.

Minow, in an email to Law School affiliates Tuesday, wrote that she was “confident” that the new procedures comply with Title IX.

It is unclear whether other schools may depart from the University’s central sexual harassment procedures to the extent that the Law School has. When administrators first unveiled those procedures in July, they gave no indication that individual schools could or would break from them entirely.

University spokesperson Jeff Neal wrote in an emailed statement that the Law School’s “distinct pedagogical mission and longstanding reliance on a different adjudicatory system for resolving disciplinary cases” prompted its separation from the central procedures. Neal did not answer follow up questions about whether other schools with different pedagogical missions may similarly institute their own school-specific processes for investigating cases.

A committee at the Faculty of Arts and Sciences, for its part, recently drafted revised procedures that incorporate ODR and would put staff and faculty cases under its jurisdiction in addition to students.

According to Neal, Faust was unavailable for an interview on the subject Friday. Karvonides did not respond to requests for an interview. An automated response from her email account said she would not be checking email while her office is closed from Dec. 24 to Jan. 2.

The Law School’s pending procedural changes come after some faculty members voiced strong opposition to the University-wide policy and procedures. In October, more than two dozen Law School professors criticized them sharply in a letter to The Boston Globe, charging that they “lack the most basic elements of fairness and due process, are overwhelmingly stacked against the accused, and are in no way required by Title IX law or regulation.”

Among several concerns, the professors asserted that the University-wide procedures lack “an opportunity to discover facts” and to “present a defense at hearing,” as well as fail to ensure “adequate representation for the accused,” especially for those of lower socioeconomic backgrounds. The letter also took issue with the entire premise of ODR, a central office for investigating complaints “rather than an entity that could be considered structurally impartial.”

“Harvard undermined and effectively destroyed the individual schools’ traditional authority to decide discipline for their own students,” the professors wrote.

None of the professors who signed the open letter were members of the committee that proposed the Law School’s pending procedures, according to a list of committee members provided by Coates.

Karvonides, who oversees ODR in her capacity as Title IX officer, has previously said that she disagrees with claims that the central office would fail to be impartial in handling sexual harassment cases.

“In my mind, we fail in our work under Title IX if we are viewed as being biased or even advocates, or in any way that this isn’t a fair process,” Karvonides said in October. “If we’re going to make progress, people need to understand, to have trust and have confidence that this is an unbiased process.”

Law School professor Jeannie C. Suk, another signatory of the Globe letter, wrote in an email that the pending Law School procedures “address the concerns with the [University] procedures that led me to sign the statement in the Globe,” adding that she hopes that Harvard and its other schools will follow the Law School’s example.

Harvard’s handling of sexual assault remains under review at the College, whose Title IX compliance OCR is currently investigating.