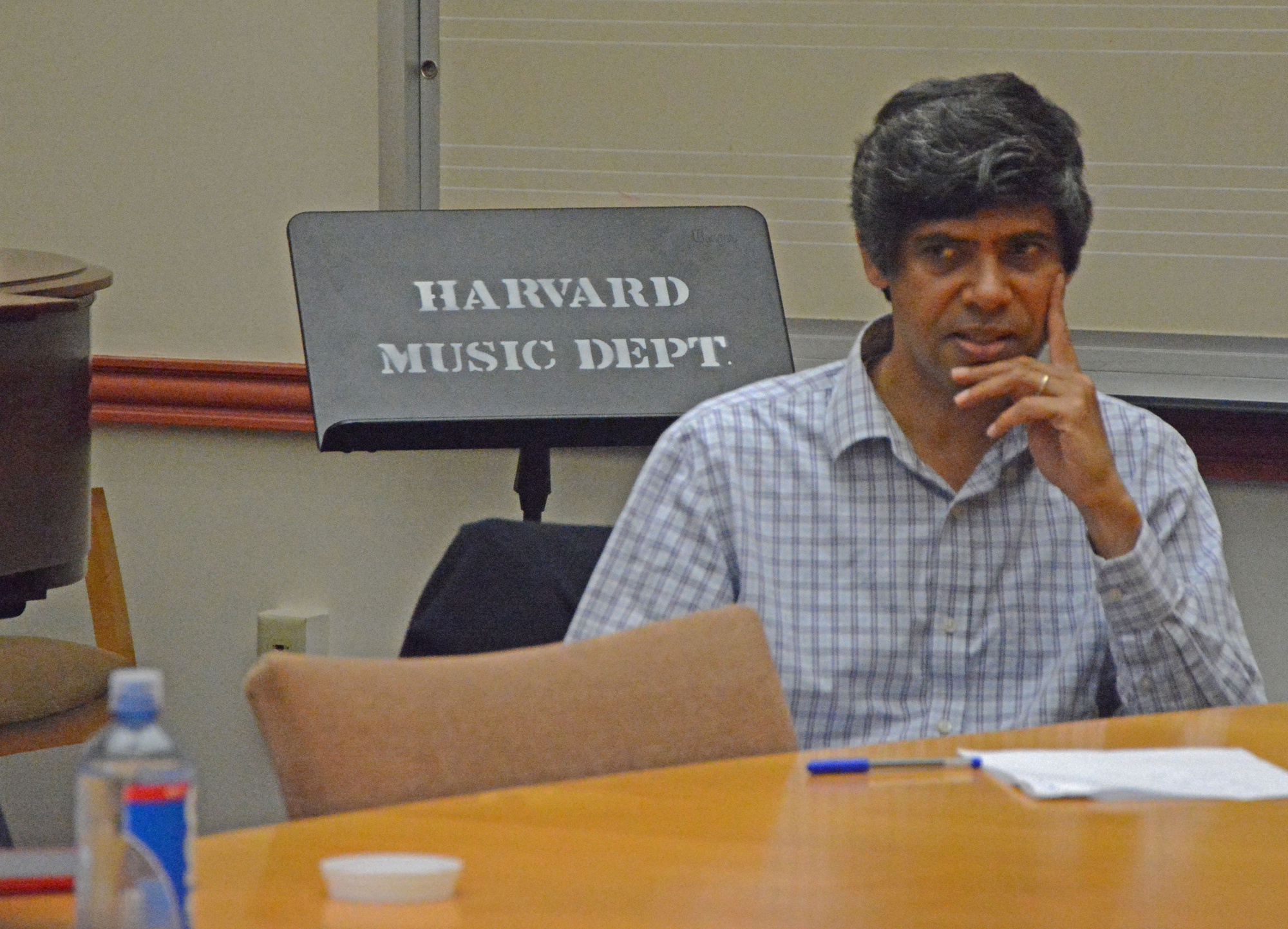 Aniruddh D. Patel, a professor at Tufts University, talks about his course on cognitive science and music with Harvard students and faculty in the music department room on a Wednesday afternoon. They discussed different ways to redesign music concentration requirements.
By Elizabeth C. Keto, Crimson Staff Writer

As its number of undergraduate concentrators drops by nearly half over the past six years, Harvard’s Music Department is embarking on a major redesign of its undergraduate curriculum, a step faculty and students say is necessary to keep pace with broader changes in the field and continue to attract new students.

The department aims to finalize its new program of study by the winter of 2016-2017 and offer the program to concentrators for the first time in the fall of 2017.

“It’s something that needs to happen every now and then, because times change and the ways that disciplines work change,” said Carol J. Oja, the department’s chair. “I’m hoping that we’ll end up with a curriculum with some flexibility in it, so that students of different sorts will end up concentrating in music and will find that it’s a meaningful experience.”

Alexander Rehding, a professor in the department and co-chair of the curricular review committee alongside Oja, said he hopes to gather new ideas on how to make the concentration more flexible and more open to interaction with other disciplines over the course of the semester.

“The English department and the language departments have long been allies, but we’re now getting a lot of interesting conversation going with other departments, like physics and engineering,” he said. “We’re trying to think through all the dimensions of music and to reach out in ways that we really haven’t in the past.”

Music concentrator Sam C. Pottash ’16 said the narrow focus of the department’s courses and its relatively rigid program of study has in the past discouraged potential concentrators.

“A lot of musicians on campus don’t study [music], either because they have other interests or because the department doesn’t align with everyone’s musical needs, given that it’s very Western and theory-heavy,” he said. “People care about representing different kinds of music and being able to think about music in more ways than just classical tonal theory.”

Still, Pottash added that he feels the department has already started addressing these problems by hiring faculty committed to new teaching methods and replacing some required courses in the concentration with electives.

“I’ve seen change happen in my time here, change that has really made my curricular experience better,” he said.

The department held the second in a series of open discussions on the future of the concentration on Wednesday. A dozen graduate students in Music and related fields, one undergraduate concentrator, and several members of the Music faculty gathered to hear from guest speaker Aniruddh D. Patel, a psychology professor at Tufts who teaches a popular undergraduate course on music and cognitive science. 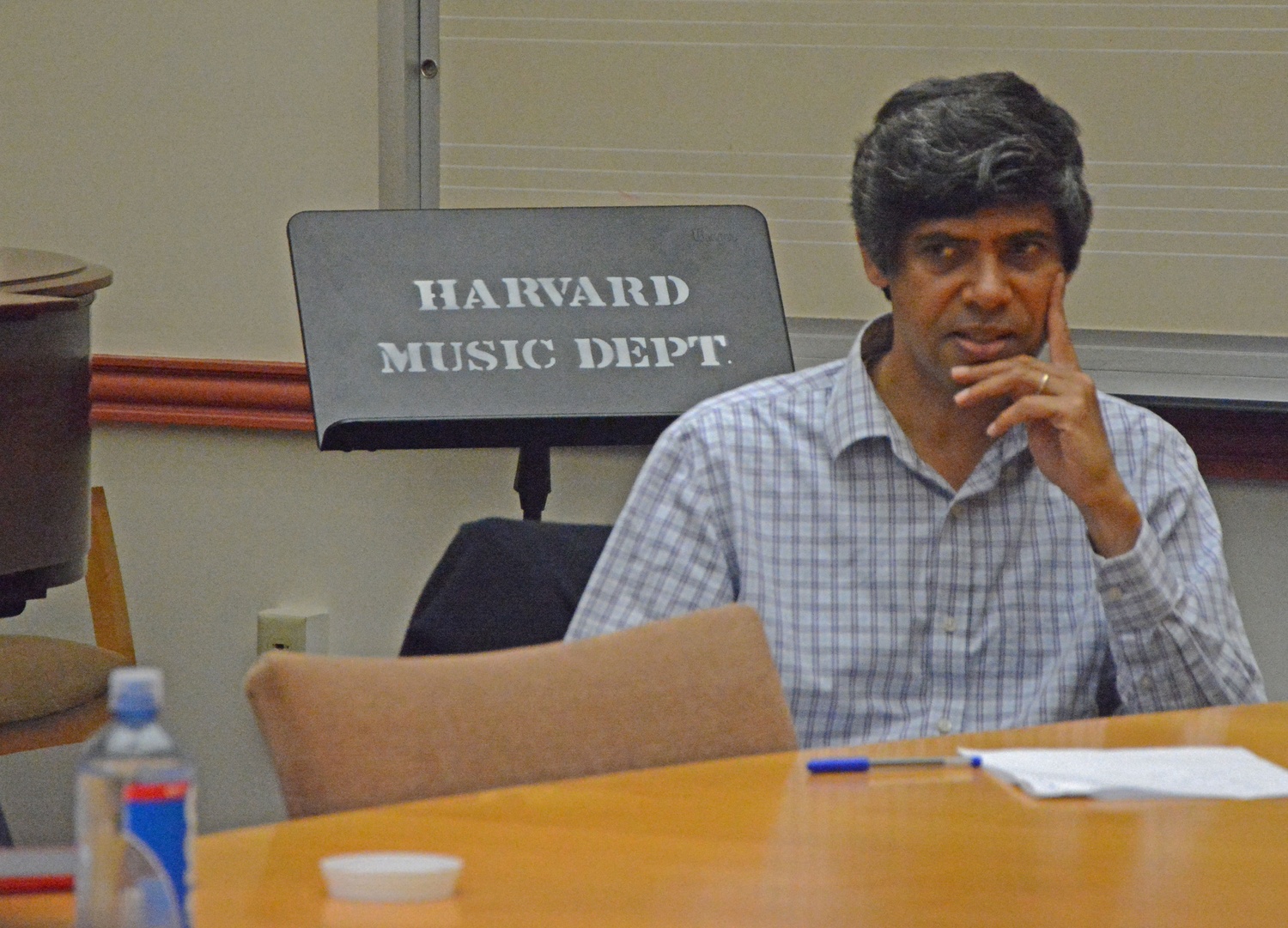 Aniruddh D. Patel, a professor at Tufts University, talks about his course on cognitive science and music with Harvard students and faculty in the music department room on a Wednesday afternoon. They discussed different ways to redesign music concentration requirements. By Hayoung Hwang

Patel discussed the goals and challenges of interdisciplinary music courses, which both Oja and Rehding said they hope to include in the new program of study.

Rehding added that he looks forward to further opportunities for discussion throughout the concentration’s restructuring.

“Our working hypothesis has always been that we want to produce thinking musicians. What we’re working toward over the course of this year, as we review the curriculum, is to come up with a very precise definition of what that means,” he said. “We want the curriculum to reflect the great diversity of musical experiences that Harvard students have, but we also want to make sure the materials they’ll study have the same depth and rigor that Harvard students have come to expect from other concentrations.”