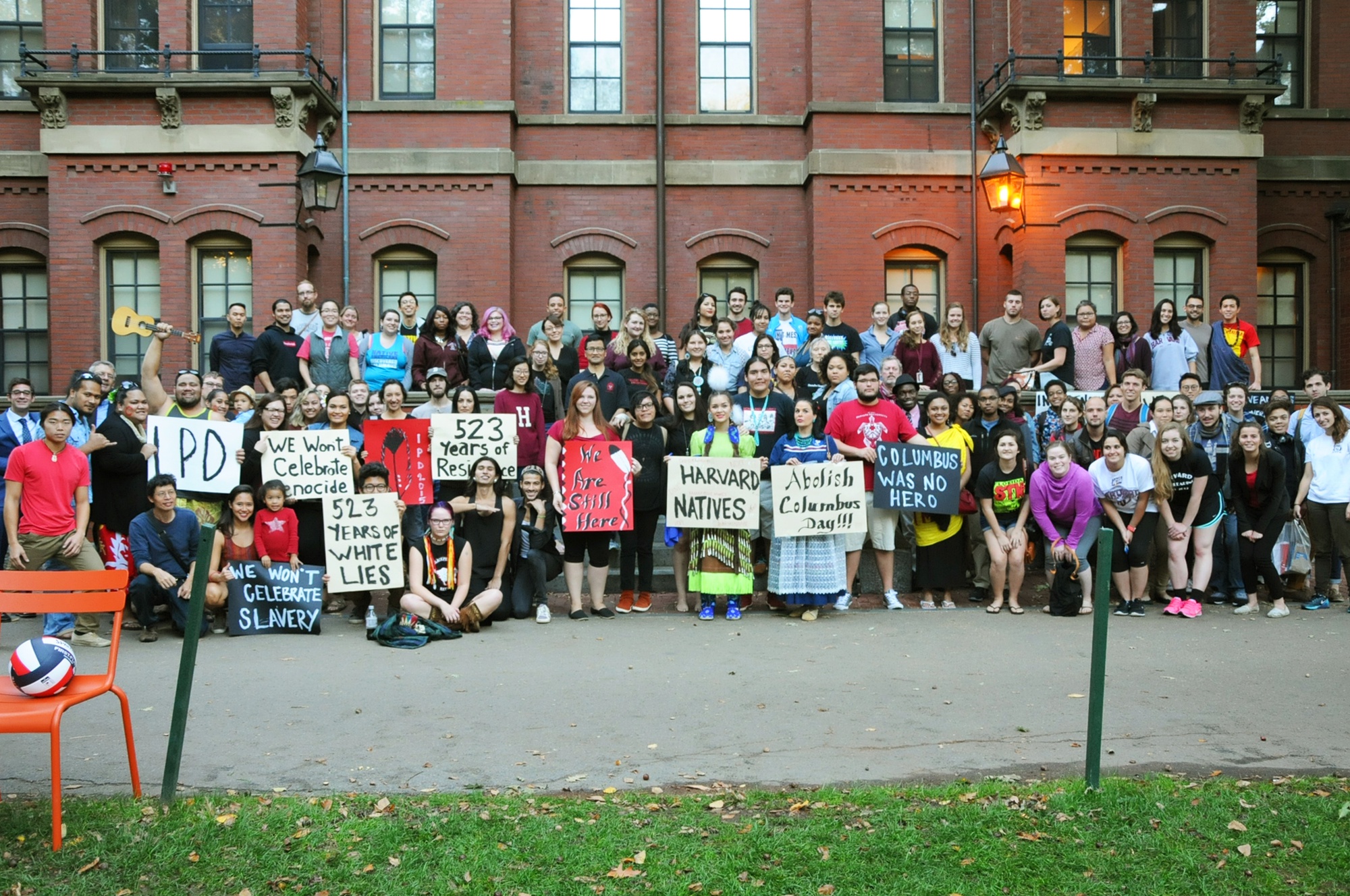 Performers and audience members at the Indigenous Peoples’ Day celebration pose for a photo in Harvard Yard on Monday.
By R. Blake Paterson, Crimson Staff Writer

As the University took an official holiday on Monday for Columbus Day, Harvard affiliates and local residents gathered in Harvard Yard to celebrate Indigenous Peoples' Day to honor indigenous cultures of the Americas and Pacific Islands through traditional dance, song, and spoken word.

"This event is to honor how indigenous people live today according to their traditions or how they survived in whatever form they can," said Caden T. Chase ’17, co-president of Native Americans at Harvard College. "This is honoring our ancestors and also to show that we still exist, and that we are still strong, and we stand together." 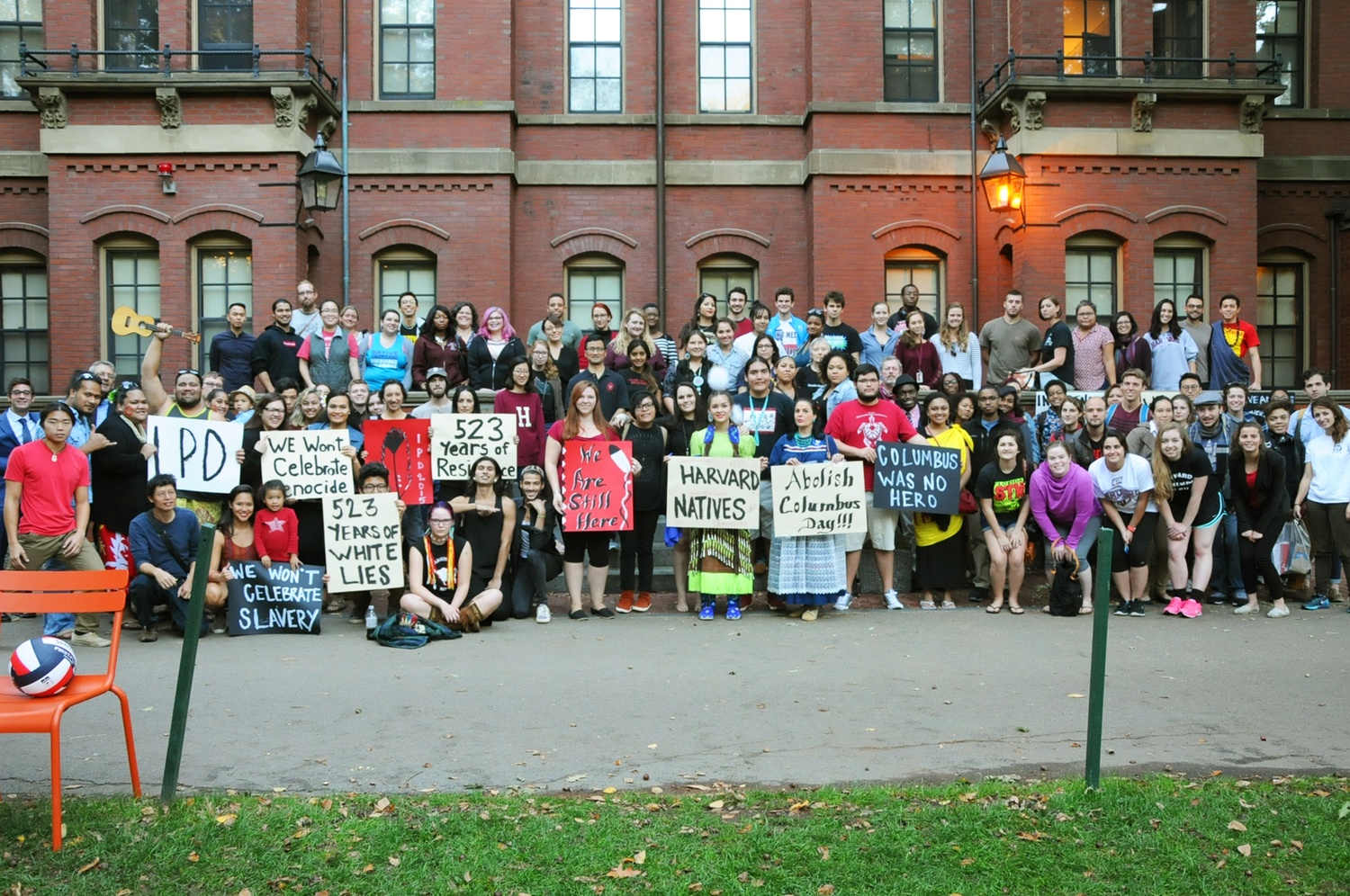 Performers and audience members at the Indigenous Peoples’ Day celebration pose for a photo in Harvard Yard on Monday. By Jason K. Thong

Posters reading "We're Still Here," "523 Years of Resistance," and "Native Americans Discovered Columbus Lost at Sea" adorned Matthews Hall, which roughly marks the location of Harvard's Indian College, which existed from 1655 to the 1690s. The founding Harvard Charter of 1650, which established the Harvard Corporation as Harvard’s governing board, dedicates the College to "the education of the English and Indian youth of this country, in knowledge and godliness."

SaNoah LaRocque ’19, a member of the Turtle Mountain Band of Chippewa Indians, performed a jingle dress dance, and said being on the East Coast held special significance because the area represented the epicenter of contact between colonial settlers and native people.

"To say that we still have these little bits of our culture, to say that we still dance these dances, that we can still speak these languages, and have this culture—it just means the absolute world to be able to dance on this ground, in front of these people at Harvard College, of all places," LaRocque said.

Kenard G. Dillon ’18, who performed spoken word on his Navajo-Apache-Hopi heritage, said some performances may have been political, but the overarching goal of the event was to celebrate indigenous cultures. 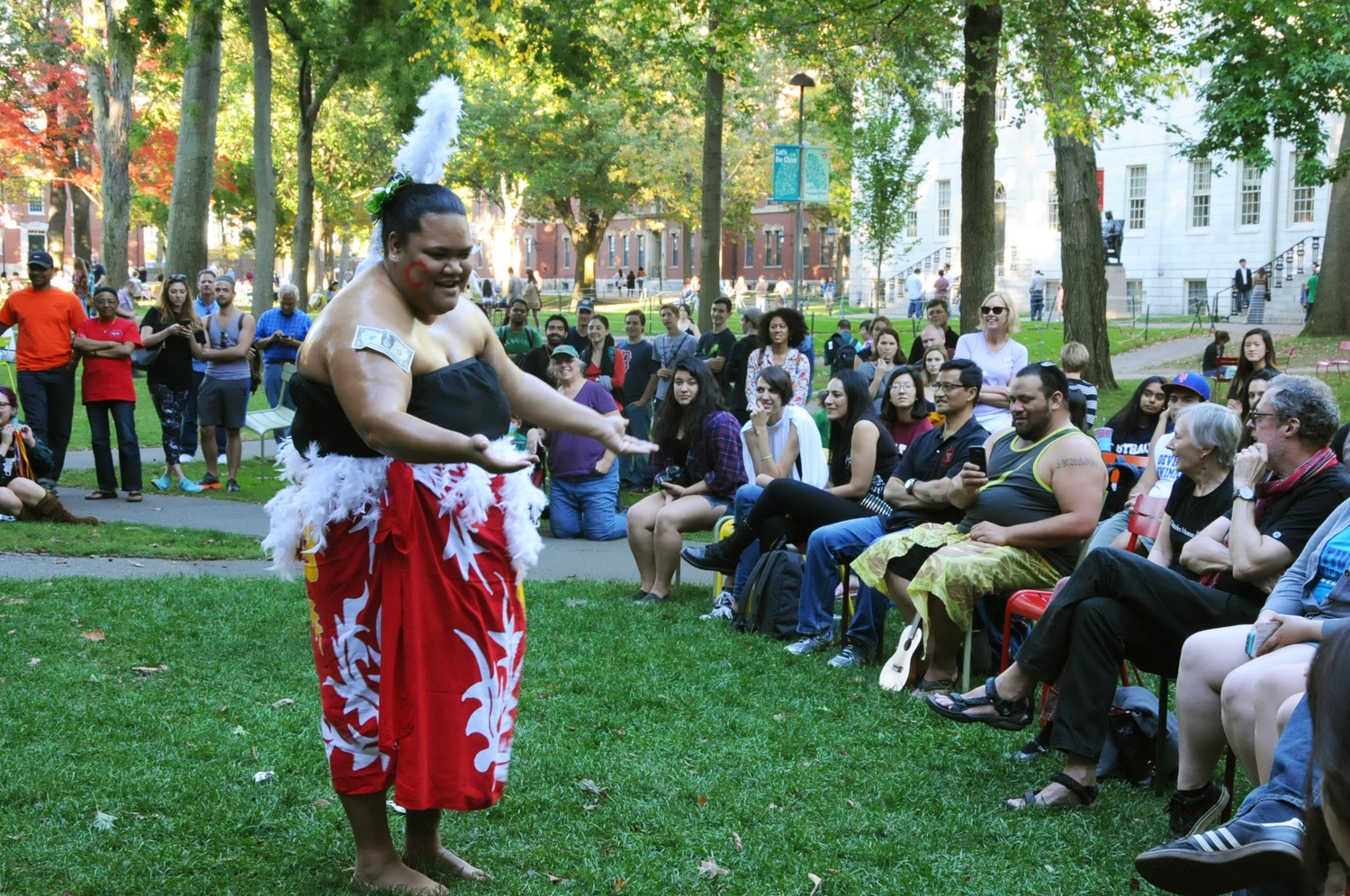 "We're here to celebrate the resilience of each of our individual peoples who have lived through colonization, and assimilation, and genocide," Dillon said.

Near the performance area, attendees could sign a petition demanding that Harvard rename Columbus Day to Indigenous Peoples’ Day.

“We believe Columbus does not represent Harvard’s values of ‘respect, dignity, and different’ among others and each other,” the letter to University President Drew G. Faust read. It cited cities like Portland, Ore., Seattle, Wash., and Albuquerque, N.M., that have recast the holiday.

"What motivated me to do this was in fact the idea that we can look at the historical record and understand that what [Columbus] did was in fact a violation of human rights," said Nakaiye Flotte, Graduate School of Arts and Sciences student who wrote the petition.