Football Looks To Extend Streak to 19 at Lafayette 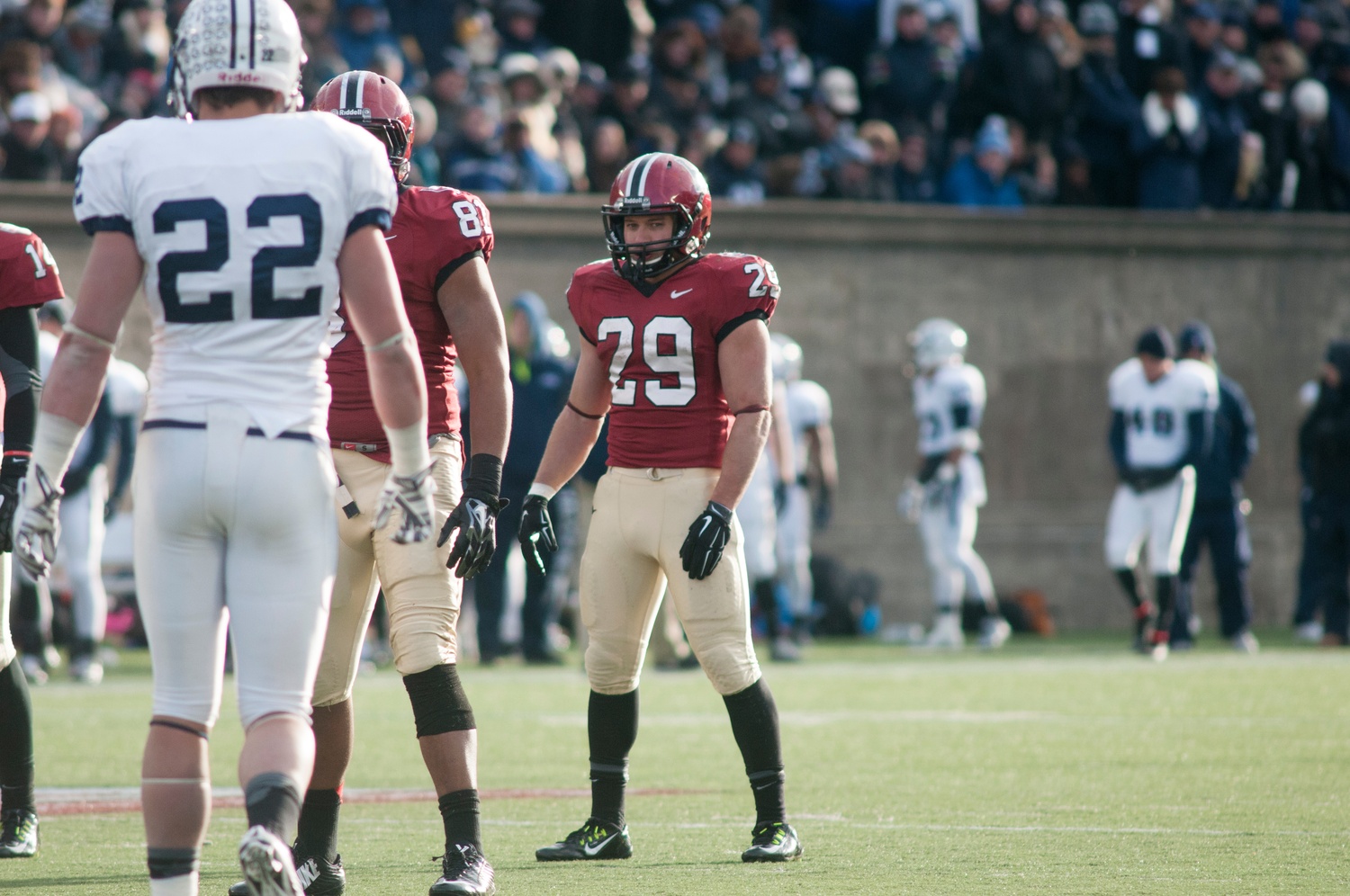 Senior running back Paul Stanton has been a fixture in the Harvard backfield since his sophomore year, when he took over the starting job from graduated senior Treavor Scales ’13. By Robert F Worley
By Max McEvoy, Contributing Writer

In the combined 10 games that the Harvard and Lafayette football teams have played this season, the two squads share a single opponent: Georgetown.

The very next week, Georgetown faced off against the Leopards (1-5, 0-2 Patriot League) in Washington, D.C. This time the result was markedly different, as the Hoyas cruised to a 38-7 victory.

That imbalance in result tells you all you need to know about Saturday’s matchup between Harvard and Lafayette. Riding an 18-game win streak, the Crimson will head south to Easton, Pa. in full expectation of a blowout.

“We are going to bring it all to them,” said senior defensive end James Duberg. “[It’s a] great opportunity to get some young guys in there assuming that we take care of business in the first half. Lots of blitzes going in this week—fun stuff.”

Certainly the two teams have had very different seasons so far. The Leopards’ only win of the season came against lowly Wagner, which currently has an 0-5 record and lost 26-3 to a perpetually struggling Columbia team.

If the Lafayette ship is going down, then the leaks are on all sides. While the Leopards’ defense has let up an average of 32 points per game, the offense has been just as dismal, putting up a season total of 72.

Lafayette seems destined to finish worse than last year, when it stuttered to a 5-6 record.

By contrast Harvard has not lost since 2013, when it dropped an overtime game to Princeton.

What has been consistent about the Crimson over the last two years is that it has not played down to supposedly weaker opponents. So far this season, Harvard has won its games by an average score of 45-10.

“We have a very experienced offense, with the combination of having the right personnel and a great coaching staff,” said senior tight end Ben Braunecker.

Experience has obvious payoffs, as the attack has produced a total of 478 yards per game, neatly split between 202 yards on the ground and 276 yards in the air.

“It is really hard for the defense to scheme around us,” Braunecker said. “It’s almost like the old cliché—pick your poison. If you stop the run game, we’ll beat you in the pass game. And if they switch coverage, we’ll pound them in the running game.”

As for the defense, the Crimson has been lights out limiting its opponents to just 95 rush yards and 180 passing yards per game.

Similar dominance stems from he team’s stellar depth. All starting members of the secondary are seniors, and the old hands have united into a first unit that has not conceded a touchdown in its last three outings.

“We have a veteran defense,” Duberg said. “A lot of us have 14 games under our belt. We have lots of returning starters on both sides of the ball.”

Unfortunately for the Leopards, the prospect of playing at home does not offer much shelter. So far this season, Lafayette has been outscored 105-21 at Fisher Field.

These statistics will surely cause senior running backPaul Stanton, Jr.to lick his lips as he attempts to add on to his 102 yards per game average so far this season.

The same can be said about senior wide receiver Andrew Fischer, who is currently averaging 91 yards per game. Despite sitting out last weekend because of an upper-body injury, Fischer expects to be back in action on Saturday.

But individual accolades aside, the Crimson aims to use this weekend as a clean dry-run for the rest of Ivy League play, which will resume next weekend when Harvard hosts Penn.

“The most important thing for us, going into a non-conference team on a four-game win streak, is to not have a let down,” said Braunecker.