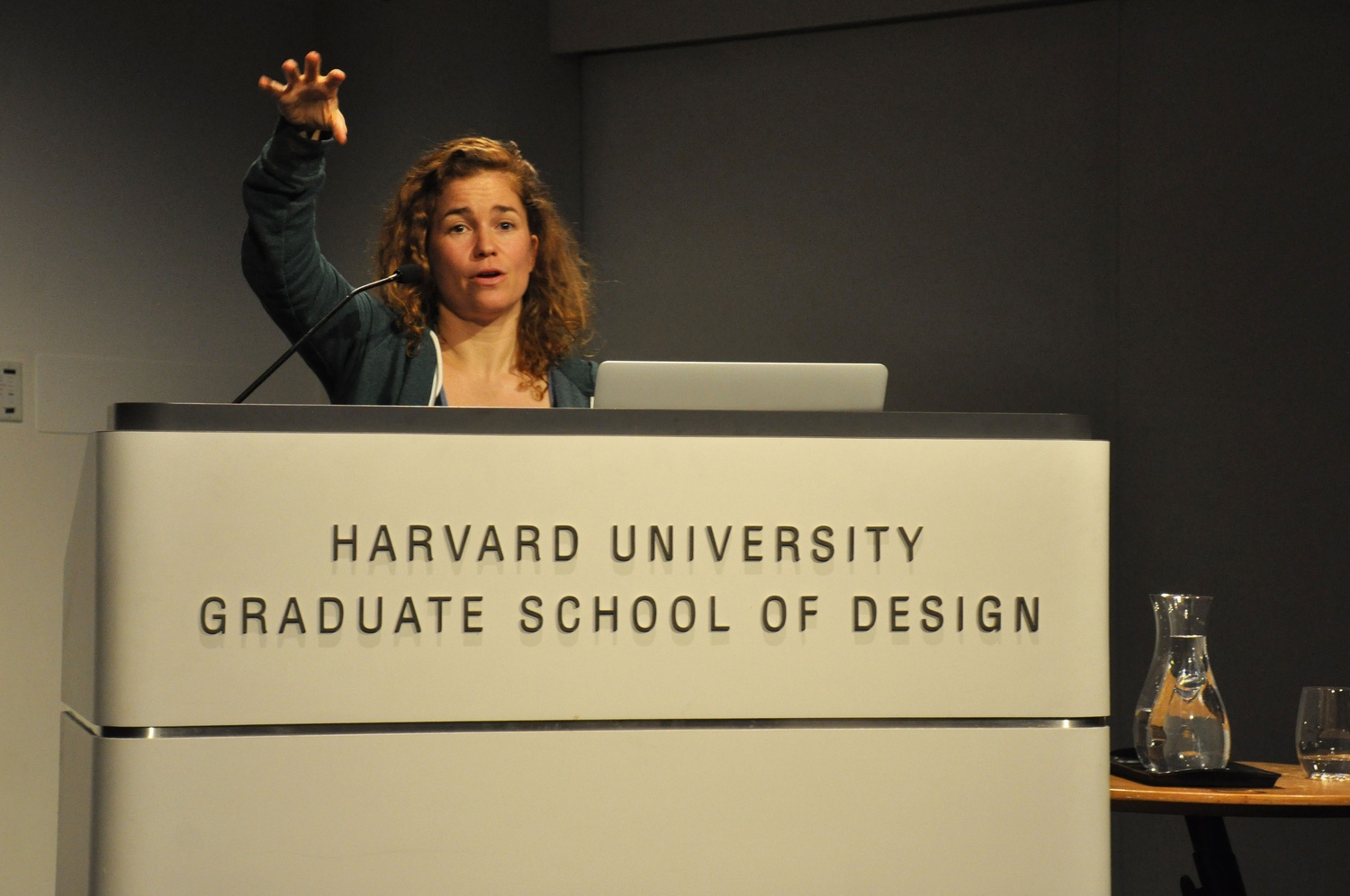 Caledonia Curry discusses her work at the Loeb Fellowship 45th Anniversary Lecture on Thursday. Curry, who works under the name “Swoon,” is a classically trained artist and printmaker interested in the relationship between people and the built environment. By Katherine W.K. Smith
By Derek G. Xiao, Contributing Writer

Urban artist and activist Caledonia Curry—better known by her artist name "Swoon”—opened the Loeb Fellowship 45th anniversary and alumni weekend by discussing the role of art in activism and her personal shift toward art that serves a practical purpose.

“I had this really gnawing feeling where we just moved mountains, where we just raised insane amounts of money [for artistic installations],” Swoon said before a packed Piper Auditorium audience at the Graduate School of Design on Thursday evening. “I just thought, ‘God, what about if we put this to a different use.'”

Swoon then turned her attentions to projects in collaborative architecture with local communities, starting with the construction of “Superadobe” community centers following the 2010 Haitian earthquake, and later the design of ceramic tiles for a church in the decaying city of Braddock, Pa.

Instead of allowing the dilapidated structure to be bulldozed, she deconstructed more run-down sections of the church, reusing the bricks to create a new artistic space for the Braddock community.

Swoon views such projects as an integral part of resistance against passive acceptance of major global crises, such as global warming and modern imperialism.

“There are forms of resistance which take the form of not settling for the brokenness of the way things are,” she said. “Of not seeing that brokenness as inevitable. This sort of resistance begins with naming it.”

Swoon outlined her own tale of artistic resistance, recalling the various ways with which she dealt with the brokenness that she saw in her world.

Her artistic career began with classical training in visual art and printmaking at the Pratt Institute; during that time, however, she turned to the world of street art. “I felt like I wanted to be a part of my world in a different way,” she said. “And with cities I just saw this new language, and it felt to me that in some ways cities were the highest art form.”

The audience, comprised largely of Loeb Fellowship alumni, Graduate School of Design alumni, and other architects and artists, took note.