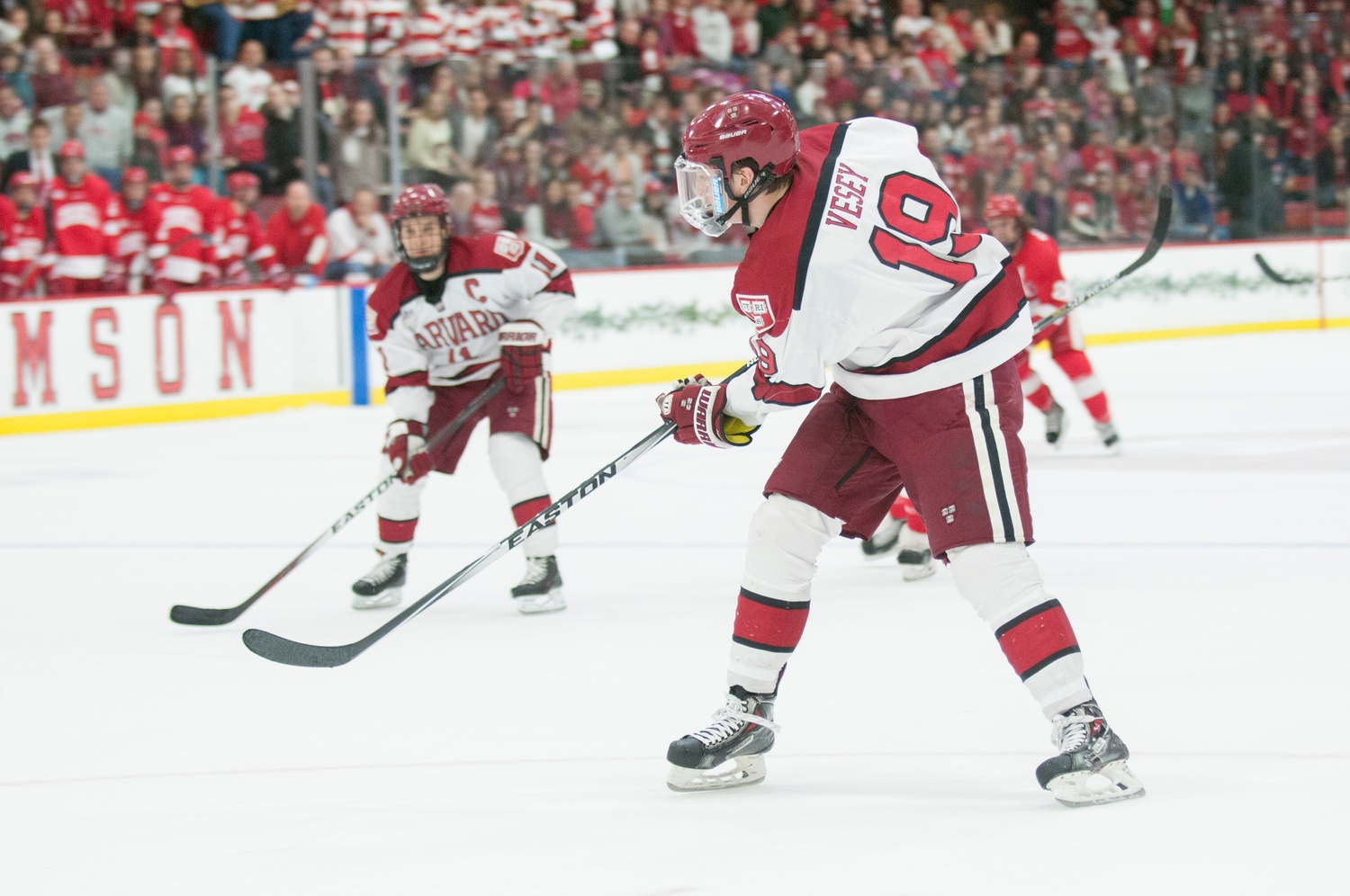 For the first time in 24 years, a familiar name appeared in a Saturday night box score at the Bright.

At 4:57 in the second period of the No. 9/8 Harvard men’s hockey team’s 3-3 tie with the University of New Brunswick, freshman forward Ryan Donato scored on a two-man advantage off a sharp wrist shot from the left faceoff circle. Father-coach Ted Donato ’91 watched with approval from the Crimson bench, perhaps recalling his first goal in a Crimson sweater decades ago.

A physical contest with one of Canada’s top intercollegiate programs, Harvard’s only exhibition game of the 2015-2016 season provided a preview of what might be to come for the younger Donato and a Crimson team that will open NCAA play next weekend with high expectations. Taking his first postgame questions about his son, the elder offered cautious praise.

“I think our power play has some guys who are good with the puck, and I think he fits in well with that group,” said Ted Donato, who is entering his 12th season as Harvard’s head coach. “But I also know there’s a lot to learn there, and in a lot of ways he was much the same as our other guys with little experience, some good and some bad. And hopefully we can get a little more of the good and negate some of the bad.”

Co-captains Kyle Criscuolo and Jimmy Vesey also recorded goals on the power play to secure a 3-1 lead for Harvard before UNB scored twice in the third period, evening the score on a man-advantage goal by Cam Critchlow with under 1:30 to play in regulation. Harvard tested line combinations throughout and rotated goaltenders, with freshman Michael Lackey in net for the first two periods and senior Peter Traber in net for the third.

On a busy night for the NCAA’s reigning goal-scoring king, Vesey tied the game at one with a nifty top-shelf finish at 18:16 in the first period. Criscuolo won an offensive zone face-off to Vesey, who deked and dove across the slot and around UNB goaltender Etienne Marcoux for the score.

“Obviously they hadn’t watched film on us,” Criscuolo laughed. “We probably run that play seven times a game.”

After Donato’s goal gave Harvard the lead early in the second, Vesey followed the act by drawing a five-minute major and game misconduct to the Varsity Red’s Philippe Halley, who grabbed Vesey’s facemask in a line-wide scrum after a whistle. On the ensuing advantage, Vesey found Criscuolo open in the slot to extend the Crimson’s lead to two with under six minutes to play in the second period.

Harvard had opportunities to extend its lead in the third, particularly following a five-minute major and game misconduct to Francis Beauvillier at 10:44, but Marcoux held solid in the face of point-blank chances.

On the other side of the ice, Saturday seemed to provide little in the way of resolving Harvard’s goaltender competition, which Ted Donato has billed as a three-way battle between Lackey, Traber, and sophomore Merrick Madsen.

Lackey yielded UNB’s first shot on goal of the game, an even-strength blast from defenseman Stephen Anderson, yet stopped the Varsity Reds’ next 12 shots on goal. In the third period, UNB’s Rob Mignardi and Critchlow took advantage of a poorly-supported Traber on the power play, yet the senior goaltender made a handful of impressive stops, including one in overtime on a breakaway by Varsity Red defenseman Matt Petgrave. Madsen, meanwhile, played two periods of a closed scrimmage against the University of Prince Edward Island on Friday.

“All three of them have worked really hard in practice, so it’s nice to see them play well,” Ted Donato said. “I know there will be a lot of competition as we go through, and we’ll see how it plays out.”