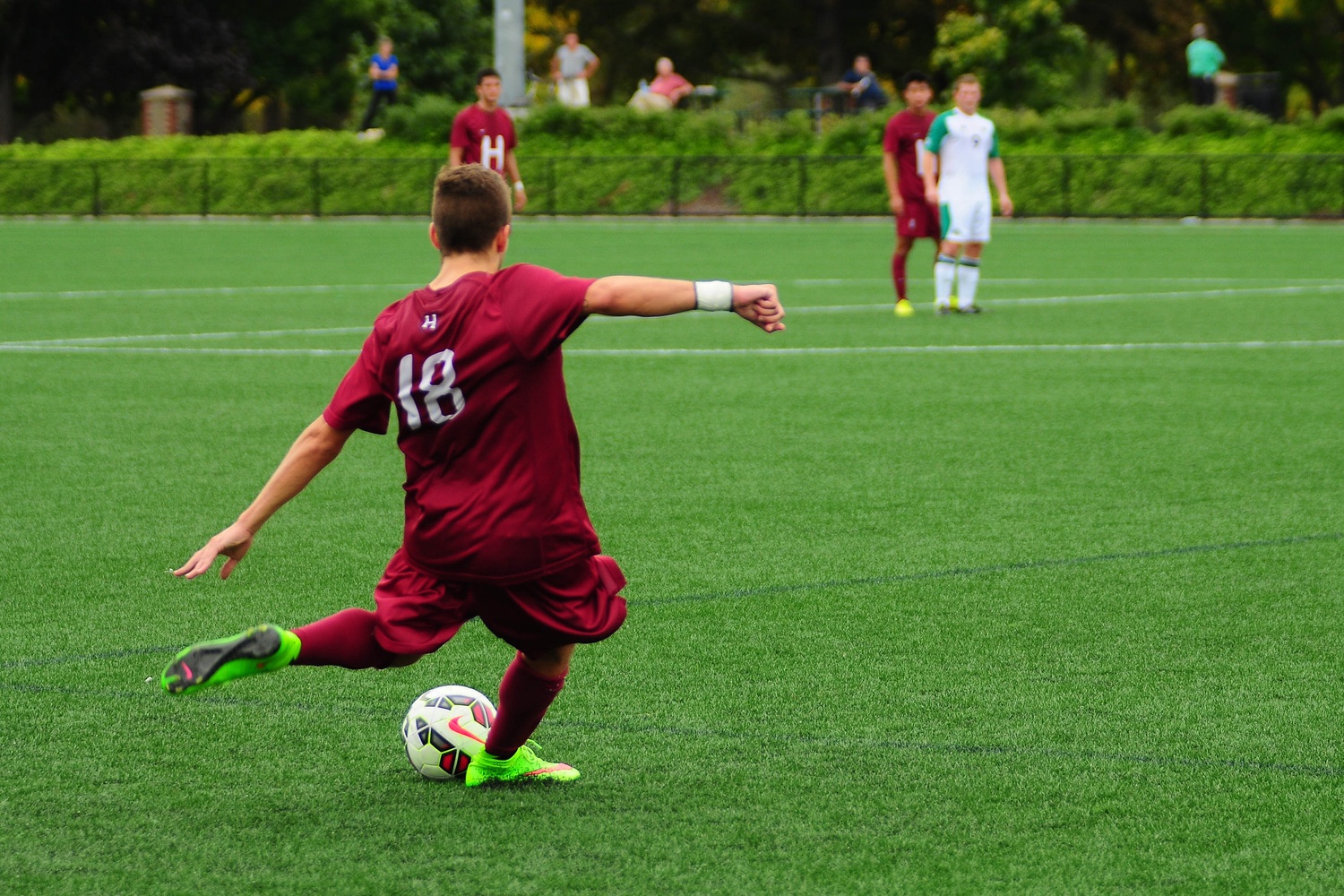 On a night where the Harvard men’s soccer team drew 17 fouls against the University of New Hampshire, sophomore free-kick taker Christian Sady was consistently the center of attention.

Sady curled three dangerous crosses into the box Tuesday night at Jordan Field, two of which found the heads of Crimson strikers and one of which even produced a penalty kick. But all three times, Harvard came up empty.

So when the midfielder stepped up to take another free kick in the 55th minute, he elected to try something different.

Following the whistle, Sady quickly pushed the ball ahead to junior midfielder Sam Brown, whose cross into the box provided an opportunity for senior forward Jake Freeman—one that the Crimson’s leading scorer was not going to squander. Bringing the ball to his left foot with his chest, Freeman drove a shot into the lower right corner of the net, lifting Harvard (3-4-2, 1-0-0 Ivy) to a 1-0 win over the previously unbeaten Wildcats (7-1-2, 1-0-0 America East)

Through nine games, the senior has found that “right spot” time and time again. Freeman has now scored the game-winning goal in each of the Crimson’s three wins in 2015.

The senior’s fourth goal of the year opened the scoring for Harvard, but not before the game nearly started the same way it finished against Yale on Saturday. After UNH’s Andrew Caput sent senior defenseman Andrew Chang flying in the box in the 23rd minute, the referee pointed to the spot, prompting senior striker Tim Schmoll to step up for a penalty shot.

Schmoll began his run-up, then stuttered, aiming to freeze senior netminder Ryan Carpenter. But Carpenter remained patient, and Schmoll drove a low shot into the outside of the right post, leaving the scoreboard unchanged.

Up until that point, the Crimson had maintained a steady hold on the game, controlling possession for lengthy portions of time in the Wildcats’ half. But Schmoll’s miss activated a UNH onslaught, forcing Harvard, as Crimson coach Pieter Lehrer put it, to “weather the storm” against six consecutive Wildcat shots.

But behind three Mendez saves and a pair of missed targets, the Crimson managed to escape the frame still even with the visitors.

“Evan has been the most consistent in training and preparation and execution on the whole team,” Lehrer said. “He’s been fantastic.”

In the second half, scoring chances became harder to come by, but Freeman put away his chance early in the frame when the ball bounced his way after ricocheting towards the 18-yard line off the head of a leaping UNH defenseman.

“We just wanted to take a deep breath,” Freeman said. “To restart from there, you’ve got to have a short memory. So once we came into halftime, [we thought], ‘Just calm down, we’re going to be fine. Let’s get our chance and put it away.’”

For the remainder of the half, the Wildcats continued to struggle putting away chances. But with four minutes to go, UNH nearly found an answer. After senior defenseman Lukas Goerigk blasted the ball deep into the Harvard zone, classmate defenseman Connor Pauley flicked the ball up the left wing with his head, initiating a last gasp attack.

Rookie midfielder Alex Valencia ran onto the ball, looking to use a burst of speed to blow by senior defenseman Michael Klain. Just as Valencia appeared to gain an edge, Klain bumped the freshman from the side, sending him to the ground inside the penalty area. But the referee opted not to make the call, enabling the Crimson to close out the win.

“We wanted to build off the momentum from the last win in the Ivy League,” Freeman said. “And that’s what we got to keep doing. Wins build momentum, so if we can do that, we feel like we’ll be in a good spot.”