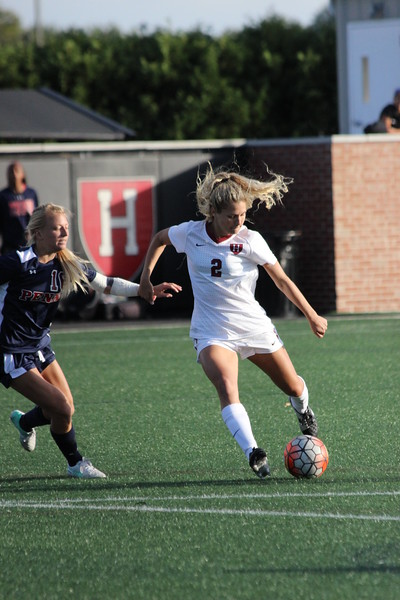 Junior forwards Midge Purce and Rachel Garcia do not usually spend much time on the bench, but it paid off for the Harvard women’s soccer team on Tuesday night.

In the Crimson’s final nonconference game of the season, the duo did not enter the game until the 32nd minute. But the pair took advantage of their time on their field, combining for two goals in less than five minutes early in the second half to lift the Crimson (5-6-1, 2-0-0 Ivy) to a 2-1 victory over a red-hot Boston University team (5-5-3, 3-0-1 Patriot) at Nickerson Field in Boston. It was the first come-from-behind win for Harvard this season.

“[Holding them to one goal] was huge,” junior forward Joan Fleischman said. “One goal is one goal, and I think it would have been easy to put our heads down and choose to think about Cornell, but it was huge that we picked our heads up and took a breath and held them to that one goal so we could come back in the second half.”

Harvard went with a different starting lineup than the one it used to pick up victories against Penn and Yale. The starters included six underclassmen, including three freshmen. After BU went up 1-0 following a Christina Wakefield goal off of a free kick, five of the Crimson’s usual starters, including Garcia and Purce, the reigning Ivy League Player of the Week, checked into the game with 13 minutes left in the first half.

“I think our team really showed a lot of depth today,” Purce said. “Aside from the players who are injured, we’ve had every single player on our team start and that is an incredible thing for a team to be able to do and have no dropoff. I’m just really proud of our team. They played 90 minutes.”

Purce provided an offensive spark right away for Harvard after she and freshman midfielder Zayne Matulis exchanged passes to set up the Crimson’s first shot of the game. Harvard was able to control the ball in the Terriers zone for much of the first half’s final ten minutes as BU began double teaming the Olney, Md., native. However, the Crimson went into halftime trailing, and has only scored the first goal of the game five times this season.

“It’s a really hard thing to [come back], especially against a team like BU,” Purce said. “I think we showed a lot of resilience and a lot of pride.”

While most of the first half saw the Terriers challenge Harvard’s defense, the second 45 minutes were dominated by the Crimson offense. The bend-but-don’t-break defense of BU had been the team’s strength this season. The Terriers had not allowed more than one goal since their last loss, which came against Northeastern on Sept. 3.

Purce, who recorded a hat trick against Yale on Saturday, broke through in the 60th minute. After receiving a long pass from the defensive zone, Purce outran the BU defense and beat Terriers backup goalkeeper Bridget Conway on a breakaway.

Following Purce’s tally, Harvard kept the pressure on the BU defense. After two Crimson corner chances did not find the back of the net, junior forward Rachel Garcia’s strike from outside the box in the 64th minute gave Harvard a 2-1 lead. It was the second game-winning goal of the season for Garcia. The transfer from Georgia also lifted the Crimson to a 2-1 victory against New Hampshire on Sept. 17.

After losing four of its first five games, the Terriers entered Tuesday on a 7-game unbeaten streak, including a 4-0-0 record at home. During that stretch, BU had scored 16 times and outscored its opponents by 11 goals.

The Terriers have been a thorn in the side of Harvard in recent years. The Crimson has gone 1-6-2 during Harvard coach Ray Leone’s tenure, including losses in the first round of the 2011 and 2013 NCAA Tournaments. The Crimson had not beaten BU since 2007 and had not picked up a win at Nickerson Field since 2002.

“Their defense is always good,” Purce said. “Every time, it’s a challenge. We look at film on them and their entire backline is extremely talented. We were able to beat them on a couple things and that was really good.”