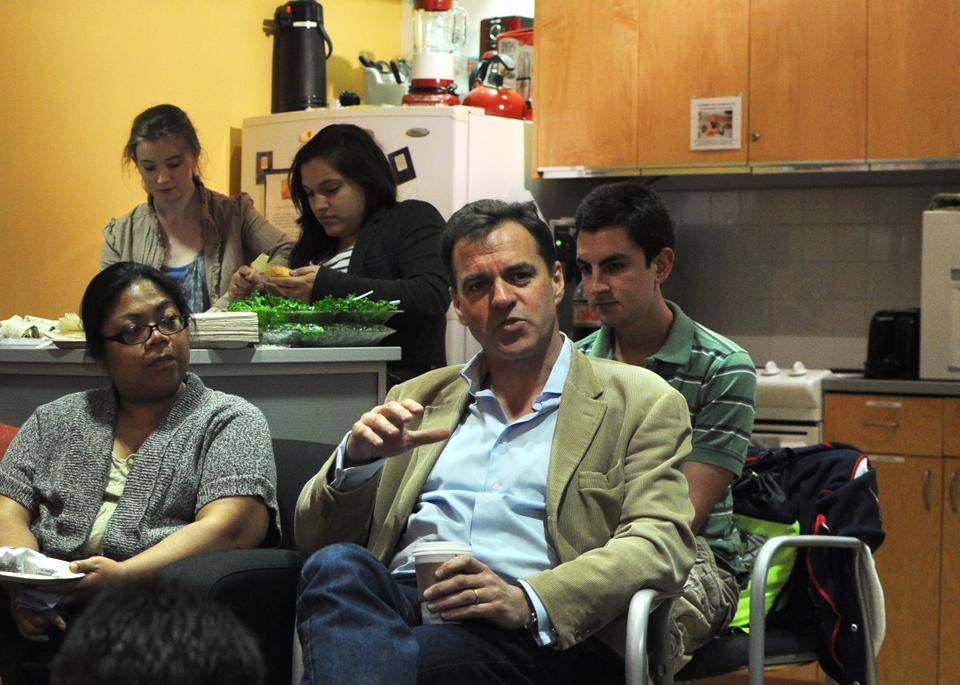 After contentious comments that angered many in the LGBTQ community, history professor Niall Ferguson offers an apology to a group of Harvard students and affiliates at the Harvard College Women's Center. A conversation about the comments and a broader dialogue broke out later in the session.
By Meg P. Bernhard and Mariel A. Klein, Crimson Staff Writers

In a post to his Facebook page Wednesday afternoon, Ferguson broke the news of his departure, writing that he will become a full-time senior fellow at Stanford’s Hoover Institution, an American public policy think tank. Ferguson has served as an adjunct senior fellow there for more than a decade.

History professor and famed Henry Kissinger biographer Niall C.D. Ferguson, pictured at an event in 2013. By Steven A Soto

At Stanford, Ferguson will focus on researching and writing the second volume of his biography of Kissinger, the former U.S. secretary of state, Ferguson wrote. He will not immediately teach at Stanford as he works on the biography, according to the Facebook post.

“Harvard is a remarkable institution and I have been more fulfilled here as a teacher and scholar there than at any time in my professional career,” he wrote on Facebook. “I shall miss the intellectual ferment and my many friends there, but this really is a perfect time for me to take a break from the classroom.”

Ferguson, 51, hails from Scotland and came to Harvard from New York University in 2004. A professor in Harvard’s Center for European Studies, Ferguson is known for his political commentary in addition to his academic work as an economic and international historian. In 2009, he also won an International Emmy award for his six-part film series on the history of money, credit, and banking.

Stanford has recruited away some of Harvard’s top economic thinkers in recent years, including Alvin E. Roth—a Nobel laureate—and recently Raj Chetty ’00, an up-and-coming economist who was one of the youngest professors to be offered Harvard tenure at age 28.

“This is also a chance for me to get a closer view and, I hope, a better understanding of the extraordinary things that are going on at Stanford and in Silicon Valley,” Ferguson added in his Facebook post. “The economic historian in me cannot help but be fascinated.”

Ferguson could not be reached for comment on Wednesday, but according to History professor Charles S. Maier ’60, the departing professor had been considering leaving for Stanford “for a while.”

“Insofar as I knew he was considering it, many of us were trying to persuade him to stay,” said Maier, a former Crimson editorial chair.

Maier added, “Stanford is a powerful place. There aren’t many places where Harvard professors will leave for.”

Ferguson’s time at Harvard has not been without controversy. In 2013, Ferguson met international backlash after alleging at a conference that economic theories of John Maynard Keynes were unsound because Keynes was childless and gay and therefore unconcerned with the future. In the aftermath, Ferguson apologized for his remarks, to mixed reactions from students at Harvard.

History professor Alison Frank Johnson, a colleague of Ferguson’s, wrote in an email that he is “utterly irreplaceable” and that his departure will have a “dramatic effect” on the department.

“We are grateful to Professor Ferguson for his many contributions to the University,” Neal wrote. “We wish him well on his new chapter at the Hoover Institution.”

—Staff writer Jessica Min contributed to the reporting of this story.