Harvard considers the upcoming new application platform “to be a work in progress,” admissions dean says 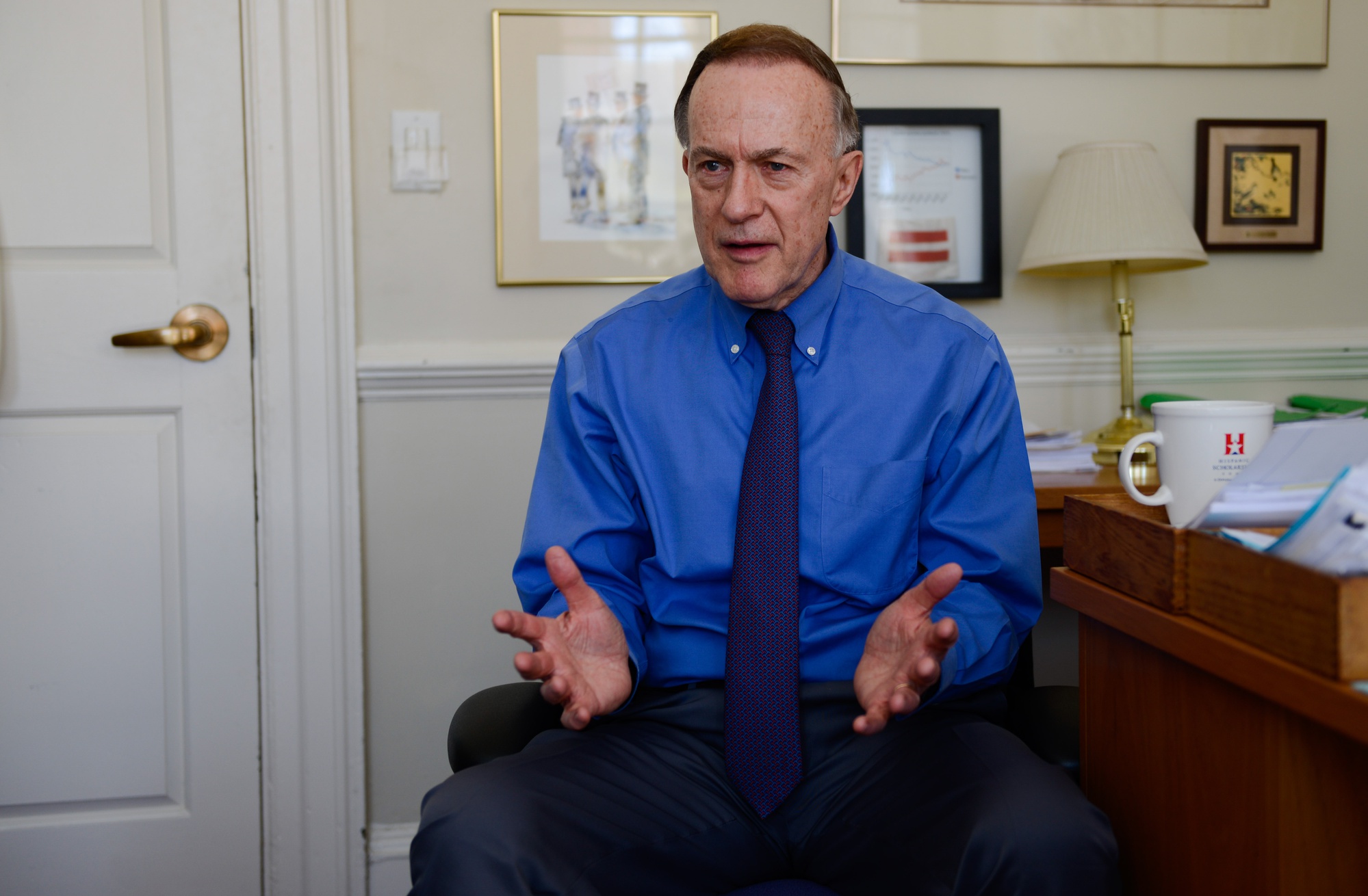 Dean of Admissions and Financial Aid William R. Fitzsimmons '67 discusses admissions statistics for the Class of 2019. “It’s one of the best days of the year,” Fitzsimmons said. “I think it’s a sad day as well, because during the admissions process we came to know some very good people who unfortunately did not get in.”
By Daphne C. Thompson, Crimson Staff Writer

Weeks after a consortium of more than 80 colleges and universities said it would release an application platform to rival the Common Application, admissions experts and Harvard officials are skeptical that the new portal will actually make higher education more accessible to under-resourced students, as the group claims.

The member colleges of the Coalition for Access, Affordability, and Success—including Harvard—announced the alternative college planning platform in September. Students can build portfolio “lockers” of their essays, presentations, and other work in the portal and share them with advisers and admissions officers for feedback throughout high school, though they can create their lockers as early as they like.

According to the coalition’s website, the new platform is intended to “get low-income, underrepresented, and first-generation students thinking about college earlier” and “give them concrete tools for planning and applying.”

Yet Harvard Dean of Admissions and Financial Aid William R. Fitzsimmons ’67 said he still has concerns about the platform, which is currently scheduled to start accepting applications in the summer of 2016.

Fitzsimmons said he has repeatedly opposed the coalition’s strict conditions for membership, which he said include a graduation rate above 70 percent within six years and a demonstrated commitment to financial aid.

According to Fitzsimmons, a major advantage of the Common Application is that it is available for all colleges to use, allowing students to apply to a variety of schools more easily.

“We hope the coalition application would recognize the stress that many high school students are under, and take the bureaucracy out of applying to colleges so students could focus on which college would be the right match,” Fitzsimmons said. He is leading a task force on the coalition’s membership criteria, he added, and will advocate for opening the application to all schools.

Jon Boeckenstedt, associate vice president of enrollment management and marketing at DePaul University, also questioned the coalition’s membership criteria and said the member schools, “by and large, do a pretty weak job of enrolling low-income students.” Boeckenstedt expressed doubt that creating another college application platform would actually simplify the application process for the low-income students the coalition aims to help.

“I just wish someone could tell me how fracturing the admissions process is going to be an advantage to low-income students,” he said.

Other admissions experts worry that the coalition application could worsen existing socioeconomic disparities in admissions by privileging students with more resources to spend curating their portfolios.

“Now, you’re giving the hypercompetitive parents and students essentially a four-year opportunity to present who they are,” said Parke P. Muth, a former associate dean of admissions at the University of Virginia. “The people who will have the time and energy to strategize about that typically are not going to be low-income kids.”

Fitzsimmons, for his part, agreed that the “locker” feature of the coalition application could lead to additional stress for both overburdened students and guidance counselors.

“I worry that you could create what I will term a ‘locker arms race’ that could begin as early as the ninth grade or earlier,” he said. “That could ramp up the stress and anxiety and pressure that many students feel and that many counselors feel.”

While the coalition initially intended to open the portal for prospective students in January 2016, its release date has since been pushed back to April after widespread negative feedback.

“I think one of the biggest problems with the launch was the extraordinarily high number of questions that have gone unanswered and scenarios that were not properly thought out,” Boeckenstedt said.

Anna Ivey, founder of the college admissions consulting firm Ivey Consulting, acknowledged the criticisms of the new platform, but said she would reserve judgment until the coalition application was formally released.

“I can understand some of the pessimism, but at the same time, I think innovation in this area is a good thing,” she said. “It’s healthy for schools to consider alternatives. With innovation is always going to come some criticism as well.”

According to Fitzsimmons, the admissions department sought to develop a third alternative to the Common Application and the Universal College Application to give students more flexibility in the application process. However, he emphasized that Harvard is still “very happy” with both existing applications, and has no plans to abandon either.

“At the moment, we are part of the coalition, and consider it to be a work in progress,” Fitzsimmons said. “We’ll see where it goes.”