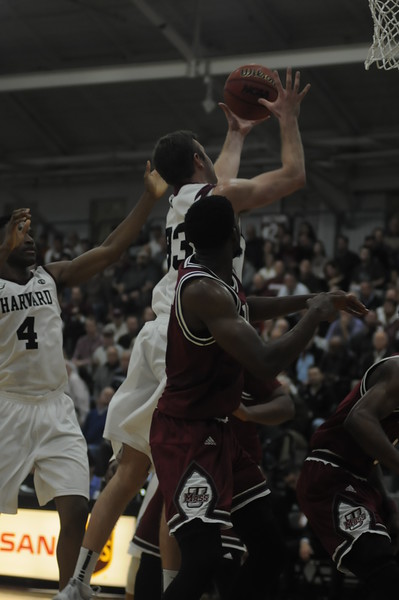 ­According to Harvard coach Tommy Amaker, the men’s basketball team is still trying to find itself.

After ending the weekend with a loss in Providence, the Crimson (1-2) fell again Tuesday, losing to UMass (2-0), 69-63. Cold shooting—Harvard shot just 35 percent from the floor—and defensive matchups forced Amaker to try out new lineups, but the adjustments were not enough to come away with the victory.

“As we’re going through this season right now, we are trying to find ourselves a little bit,” Amaker said. “Looking at some of our shooters and our shooting performance, I’m not sure even how we stayed close to be very honest.”

Tuesday’s game was a game of runs. While Harvard went into the locker room down just four at the half, the Minutemen extended the lead midway through the second frame, capping off the offensive outburst with a layup by UMass forward Zach Coleman, giving the Minutemen a 55-40 lead.

“We got into a little bit of a funk there,” Amaker said. “I thought they came right at us right at the start of the second half and I thought that was the key stretch of the game very much so and put us on our heels.”

A few minutes later, however, the Crimson went on a run of its own. Down 59-48 with just over eight minutes to go, Amaker signalled for a timeout after a steal and uncontested layup for UMass guard Jabarie Hinds. After the timeout, junior guard Corbin Miller hit a long two-pointer to cut the lead to single digits and jump start a 11-2 run, pulling Harvard within a basket.

With freshmen guards Tommy McCarthy and Corey Johnson struggling, Amaker moved Miller to the point for the majority of the second half.

“I thought [Miller] settled us,” Amaker said. “He managed our team in addition to trying to look for opportunities to score. He made a couple timely baskets for us, one right in front of our bench when he shot faked and stepped into the corner, that kind of settled us and gave us a little confidence to try to make a comeback.”

But the momentum wasn’t enough. The Minutemen would go on to score 10 of the game’s last 14 points to seal the victory. After Hinds hit two from the charity stripe and lengthened the UMass lead to six, Miller missed two desperation threes in the final minute.

Although Harvard struggled on offense, defense kept the game as close as it was at many points through the first half. Behind the defense of senior Agunwa Okolie, the Crimson defense limited the Minutemen to just 32 percent shooting in the first half, leading for nearly seven minutes before a 10-2 UMass spurt to end the half.

UMass came back to shoot 52 percent in the second half, but one area in which it had success was limiting Hinds, who had 20 of his team’s 38 points in the first. After the break, Amaker shifted Okolie to cover Hinds, and the senior limited him to just four points in the second frame.

The biggest problem for Okolie was that there was only one of him. He successfully prevented UMass leading scorer Trey Davis from having a breakout first half—holding him to just four points—but Davis found more success when Okolie moved to Hinds, scoring nine points after the break.

“Agunwa has to guard the most productive or efficient player on the perimeter for our opponents,” Amaker said. “He had the kid Davis for the first half and just did a sensational job...then Hinds gets going so we put Agunwa on Hinds in the second half and [Okolie] does a pretty good job and then Davis kind of has a bigger impact in the second half.”

Junior Zena Edosomwan provided a bright spot for the otherwise struggling Harvard offense. Edosomwan had a career-high 18 points on the night, but it was his rebounding that he found more important. Edosomwan finished with 15 boards, six of which came on the offensive end.

“[Rebounding]’s how I kind of always want things to start, but that’s not how it’s always going to start,” Edosomwan said. “If I can start with simple baskets, getting good post position, easy stuff then that’s kind of how I want to play the game.”