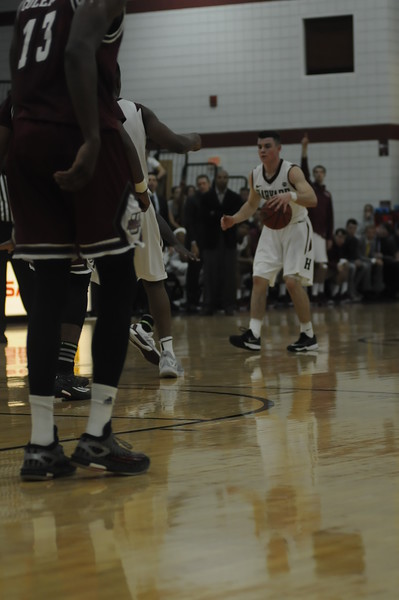 Despite playing a Massachusetts (2-0) team with a short bench and several players in foul trouble, Harvard (1-2) had its late rally come up short in a 69-63 home loss. Junior forward Zena Edosomwan led the way for the Crimson a career-high 18 points and 15 rebounds, but it proved not to be enough as Minutemen guards Jabarie Hinds and Trey Davis combined for 37 points.

In a first half dominated by turnovers, fouls, and missed jump shots, neither Harvard nor UMass was able to take a lead greater than six points. The Minutemen went into halftime holding a four-point edge but appeared to put the game out of reach as the second half began.

Often deemed the most important segment of the game by Harvard coach Tommy Amaker, the first four minutes after halftime were dominated by UMass.

“We are always concerned with the defense being away from our bench and not having the energy from our coaches and our players that are helping our guys on the court,” Amaker said. “It happens a lot, I don’t know what it is. [They] got the double-digit lead and they had us playing an uphill battle the whole way. I just thought that was the key stretch of the game.”

Before the game reached the first media timeout of the second half, the Crimson found itself down 12 following an 8-0 Minutemen run. After forward Zach Coleman hit his only field goal of the night, the UMass lead mushroomed to 15, the largest of the game by either team.

Junior guard Corbin Miller hit a three to quiet the pro-Minutemen crowd that had taken over Lavietes, however, as Harvard began a run of its own. The charge was spearheaded by an experienced and defense-oriented lineup for the Crimson.

Sophomore guard Andre Chatfield, who saw limited minutes in Saturday’s loss to Providence, joined Miller in the backcourt in an attempt to slow down Davis, who had suddenly taken over the second half.

“We kind of shed our ‘shooters’ for a minute and we were just going to see if we could get stops and we were able to do it,” Amaker said. “We thought we could just score the other way and it helped us a little bit and allowed us to kind of inch our way back into it.”

The guards were joined by Edosomwan, captain Evan Cummins, and senior Agunwa Okolie, the team’s three most experienced players. The veteran lineup willed the Crimson to a 15-4 run and cut the UMass lead to two with two and a half minutes remaining in the contest.

However, turnovers and easy baskets for the Minutemen down the stretch allowed UMass to sneak out of Cambridge with a six-point victory.

“Guys have been in those situations before, and... with that experience comes confidence,” Edosomwan said. “We were just locked in, and it was a really great run. Being in this program for years, learning from the older guys, I think guys kind of just take things from the years before. It always starts off with our defense, which is big for us, and then kind of letting the rest happen.”

After combining for 47 points and 114 minutes in Harvard’s first two games, freshman guards Tommy McCarthy and Corey Johnson were nonfactors for the Crimson offensively on Tuesday. The duo combined to go 1-for-18 from the field and sat next to each other on the bench as Harvard attempted to claw back for most of the second half.

“It’s very unfortunate,” Amaker said. “[I] just can’t believe so many open shots that we had that we just didn’t make. Pretty tough when you shoot it that poorly from guys who are supposed to be our shooters. ... I just thought that we weren’t very good on the offensive end with those two tonight.”

Johnson was one of the bright spots on Saturday and converted eight of his first 15 collegiate three-point attempts while his backcourt mate had accumulated most of the team’s minutes at point guard.

While the duo looked composed in breaking the Minutemen’s full court press, McCarthy turned the ball over five times and Johnson could not find his stroke once the team established itself in the halfcourt set. On the evening, the Crimson’s starting backcourt combined for just 11 points

“You kind of brush yourself off and we come back and we look at it, learn from it, and try to get better from it,” Amaker said. “For young guys, that can be hard. It’s a tough pill to swallow, tough lesson, but they’ll bounce back.”