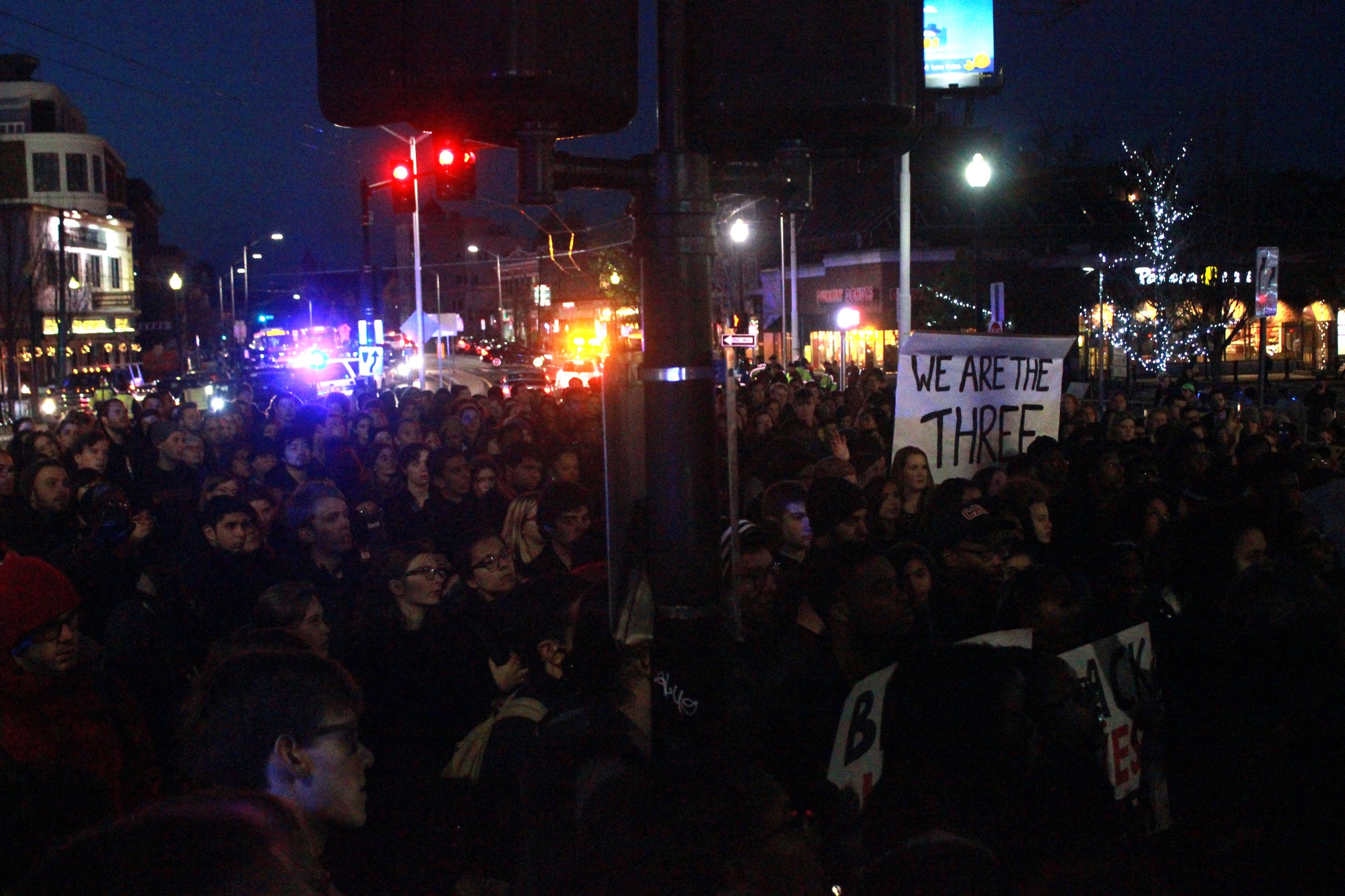 Students from Harvard and Tufts listen to student leaders from both schools after marching to Porter Square. The event was part of a larger National Student Call to Action, encouraging colleges across the country to organize their own events to bring attention to the continuing problem of racial inequality on college campuses.
By Brittany N. Ellis and Ignacio Sabate, Crimson Staff Writers

In most years, undergraduates from Harvard and Yale gear up for the storied football game with merriment, shows of school spirit, and light-hearted jabs at their rival school. But as the two student bodies prepare for kick-off this Saturday, ongoing racial tensions in New Haven have brought a different tone to the typically spirited weekend.

Demonstrations by black student activists in response to allegations of racism have taken hold of Yale’s campus in recent weeks, and protests against racism have spread to other schools across the country, including Harvard. Dozens of Harvard students and affiliates participated in a rally and march on Wednesday in support of protesters on other campuses. 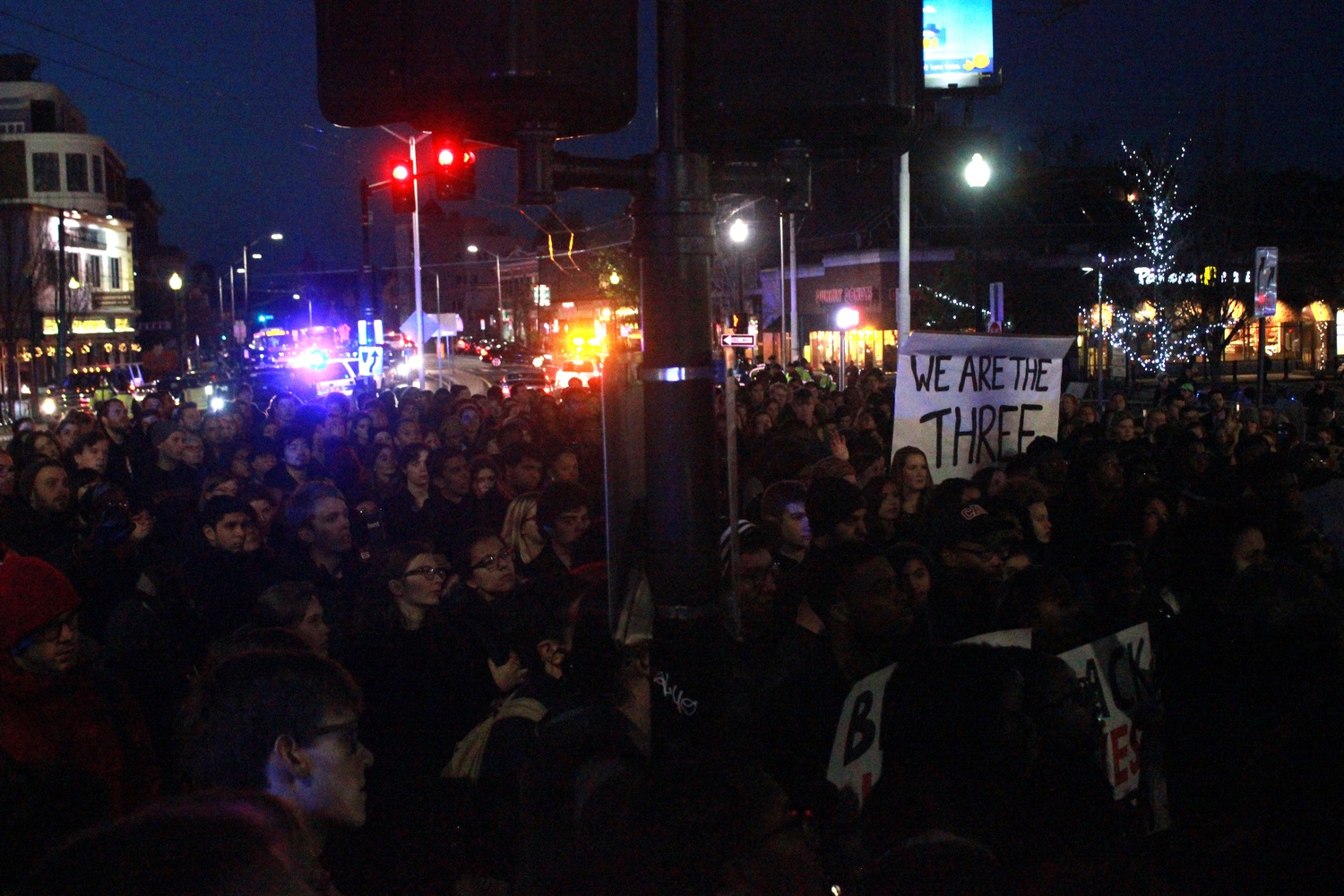 Harvard students march in support of peers at Yale on Wednesday. By Savannah I. Whaley

On Thursday, the College’s Office for Equity, Diversity, and Inclusion hosted a student-led discussion on allyship ahead of The Game. The office and its team of diversity peer leaders facilitated a discussion focused on ways students can be allies to their peers and minority groups at The Game, as well as at Harvard. Dean of the College Rakesh Khurana attended.

“I’m hoping there will be some sort of action and that it will be a genuine sign of solidarity,” discussion facilitator Esther Jeon ’17 said. “You have a lot of people who post on Facebook and wear the shirts, and talk the talk, but don’t take the time to understand what it means to be an ally.”

The diversity peer educators also created and distributed T-shirts and hats with the tagline “#solidaritY” for students to wear at The Game as a sign of support for the Yale protesters. In an email to College students this week, Assistant College Dean for Public Service Gene A. Corbin encouraged students to wear the shirts on Saturday in New Haven.

On Harvard Time, one of Harvard’s on-campus comedy groups, also broke from usual Harvard-Yale tradition in response to recent racial tensions at Yale. Ahead of this weekend’s game, the group declined to publish an annual comedic video that pokes fun at the rivalry between the two schools.

“After careful reflection, On Harvard Time has decided that this year we would rather promote camaraderie as opposed to conflict,” said Devon Guinn ’17, a leader of the troupe and a former Crimson editor. “As tensions run high at Yale, we recognize that now is not the time to release a video that would only further divide us.”

Students typically sell T-shirts touting Harvard as superior to Yale ahead of The Game, and this year some Harvard fans referenced the student movements at Yale in their designs. Some sold T-shirts describing Yale as “not an intellectual space,” which seems to reference a widely circulated video that shows a Yale student in a heated argument with Nicholas A. Christakis, a residential college master and former Harvard House master who has been at the center of the debate about race at Yale.

Nicholas’s wife, Erika L. Christakis ’86, had prompted controversy in late October when she sent an email to her college’s residents challenging an earlier message from Yale administrators advising students not to wear culturally insensitive Halloween costumes. Some students responded to that message with outrage, arguing that it was insensitive to minority students; the controversy has also prompted a debate over the freedom of speech on Yale’s campus.

According to the producers’ website, the “not an intellectual space” T-shirts have sold out.