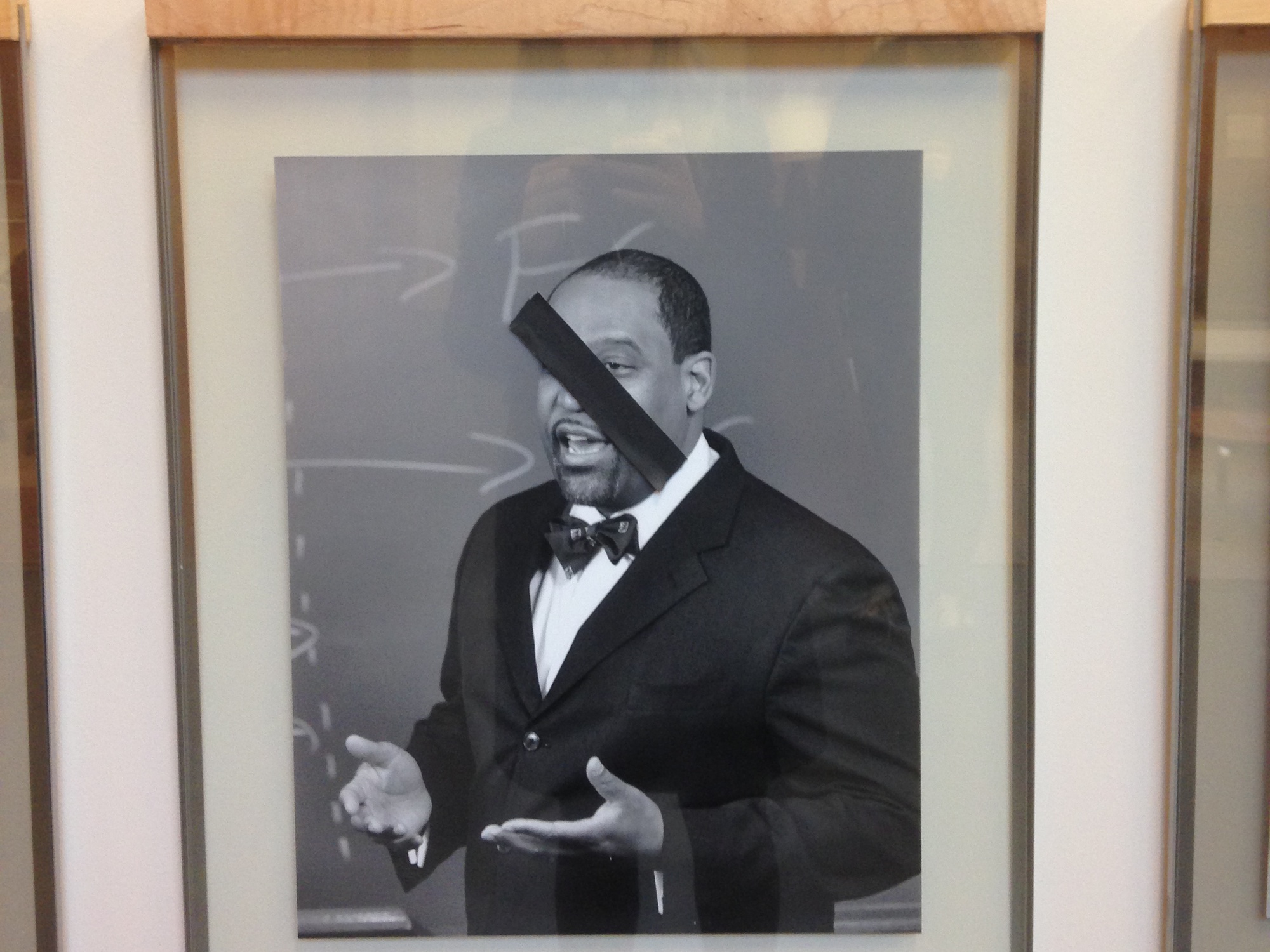 Black tape, stuck systematically across the portraits of black law professors, spurred on Thursday a police investigation into vandalism and a pronouncement from the dean of Harvard Law School that the school has a “serious problem” with racism.

Law School students and teachers who walked into Harvard’s Wasserstein Hall on Thursday morning found pieces of black tape covering some of the faculty portraits that hang on walls inside the building—specifically on the faces of black professors depicted there.

The incident prompted outrage from Law School students who were quick to condemn it as racist vandalism, and police are now investigating.

Harvard University Police Department spokesperson Steven G. Catalano said Thursday evening that the investigation is “active and ongoing,” and although he declined to comment further, Law School Dean Martha L. Minow wrote in a statement that police are investigating the incident as a hate crime.

Law School professor Charles J. Ogletree, whose portrait was among those vandalized, said he was still waiting to learn more about the incident before making too strong of a judgement.

“We’re just trying to figure out what happened and why someone targeted black faculty,” Ogletree said.

Still, among students and other Law School affiliates reacting to the incident on Thursday, many condemned it through posts on social media and formal and informal gatherings on campus.

Leland S. Shelton, the president of the Harvard Black Law Student Association, described it as “actually one of the most clear-cut, overt instances of very, very vile and disrespectful behavior from somebody”; second-year Law School student Michele D. Hall, who posted photographs of the vandalized portraits in a post on the website Blavity, wrote, “This morning at Harvard Law School we woke up to a hate crime.”

After the tape was removed from the portraits, students posted notes with words of support for the black professors alongside their photographs.

And at noon on Thursday, hundreds of Law School students, faculty, staff, and administrators filled Milstein Hall East, where students took to microphones, some describing the Law School as a sometimes racist and unwelcoming environment. Some student speakers directly criticized Minow, arguing that she does not do enough to support minority students. 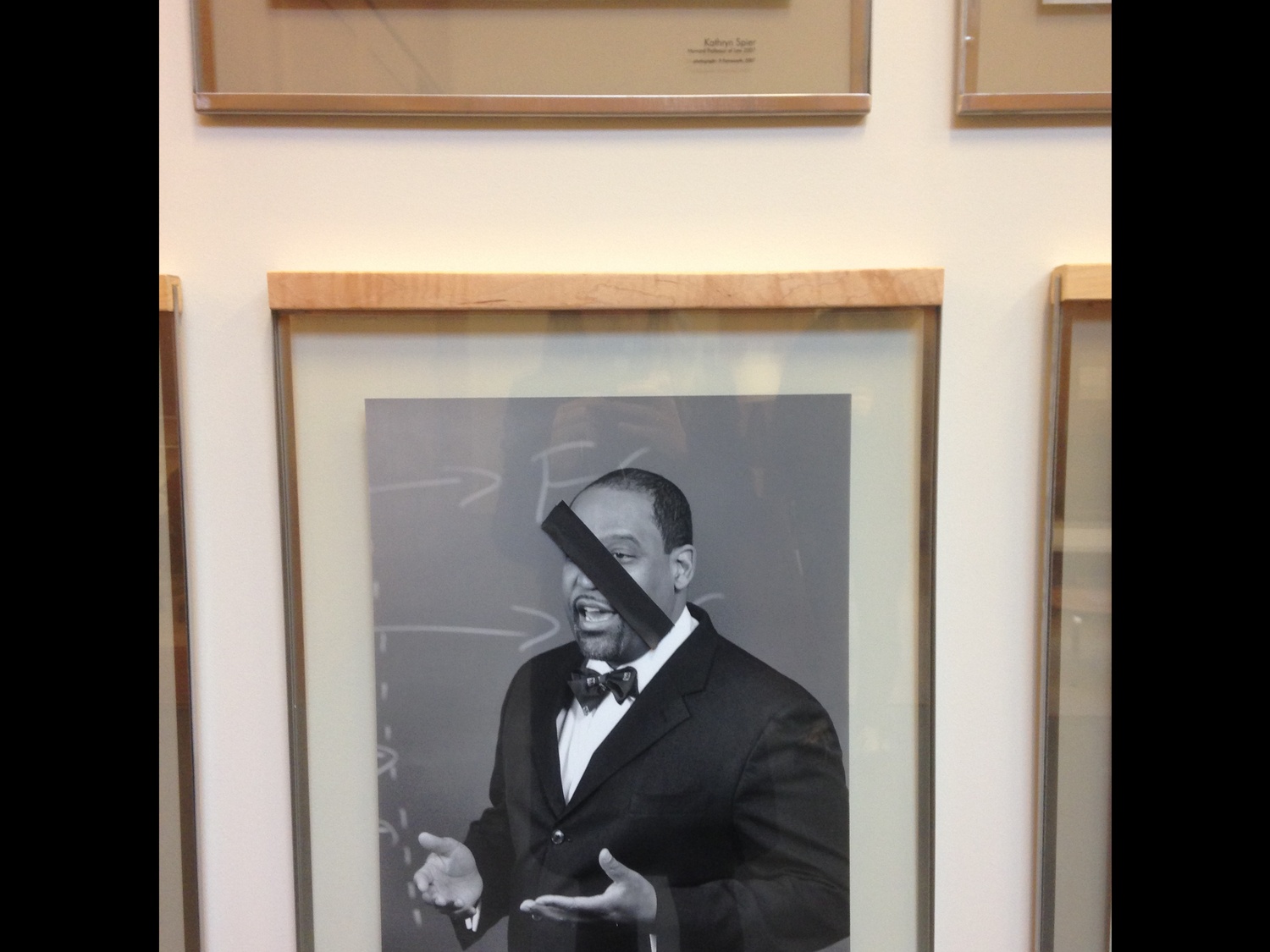 Photos of black Law School professors were covered by pieces of black tape on Thursday morning at Wasserstein Hall. By Courtesy of Elizabeth R. Tuttle

Minow, for her part, was direct in acknowledging what she described as the existence of racism at Harvard when prompted by a student. “Racism exists in America and in the United States and in Harvard and in Harvard Law School,” Minow said. “I am on record; this is my work. This is what I do.”

Further prodded by students’ questions, Minow said racism is a “serious problem” at her school.

The incident and subsequent hate crime allegations follows incidents at Yale and the University of Missouri at Columbia that have prompted protests against racism at colleges across the country, including a march and rally at Harvard on Wednesday.

It also comes as a group of Harvard Law School students who call themselves Royall Must Fall has requested the removal of the school’s seal because it features the crest of a family that owned slaves.

That group of students denounced the vandalism as “an overt act of racial hatred” in an open letter published in the Harvard Law Record, a student publication. They also claimed in their letter that the Thursday incident could be a reaction to their activism: They had placed several pieces of black tape over several depictions of the school’s seal around campus on Wednesday night, they wrote, alleging that someone had removed those pieces of tape and then placed them on the portraits of black faculty members.

Aside from that claim, some other Law School students responded to the incident with criticisms of the environment at Harvard specifically and said they hope the school will do more to support minority students going forward.

“For a lot of students, particularly students of color, it’s not surprising. It’s just more public,” Law student Derecka M. Purnell said. “It’s a public manifestation of what we experience in the classroom every day.”

Minow, responding to criticisms in an emailed statement, wrote that she has met with student advocacy groups and that she “look[s] forward to working still more with them and others towards finding effective solutions to the problems that persist in our community and, more broadly, in a society that still doesn't deliver on its promises to so many of our fellow citizens.”

While the incident took place at the Law School, students and administrators across other parts of Harvard also reacted to the event, many distressed and concerned.