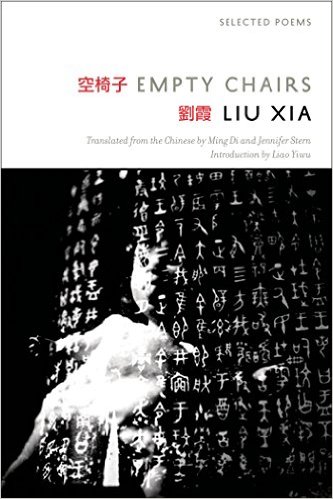 In her “Empty Chairs,” a stunning first collection of poetry published by Chinese poet and visual artist Liu Xia, her husband Liu Xiaobo, the human rights activist, political prisoner, writer, and Nobel Peace Prize Laureate, finds his literary equal. Liu’s poems, published with the Chinese text side-by-side with the English translations by Ming Di and Jennifer Stern, are selected from a 30-year period of Liu Xia’s writing. During that time, Liu Xia saw her husband and her brother repeatedly arrested, jailed, and imprisoned, likely for politically-motivated reasons, and was herself placed under house arrest and constant surveillance. It is no wonder that Kafka is a recurring figure in her poetry. The intense, haunting, visually evocative poems in the collection are accompanied by some of Liu Xia’s visual art, photographs of dolls that seem similarly confined. “Empty Chairs,” as a vision of one woman’s experience of and resistance to nearly overwhelming political force, is an incredibly powerful text.

In reading the poems, one sees how images, ideas, and themes evolved in her work over time, a development which is most vividly visible in the contrast between the opening and closing poems of the collection, both of which explore birds as mysterious haunting images. The opener, “One Bird Then Another,” concerns a couple repeatedly visited by visions of a bird. At first, Liu Xia writes, the bird “brought us / warmth and laughter.” After it leaves, however, the thought of it only brings the couple sorrow and longing for its return. The bird seems to have magically left, just evading the couple. While they pine for it intensely, they become less able to express this desire—“We kept the windows / open, remembering: the bird. / But we didn’t talk / about it any more.” Finally, after an evening out, they return to their home to find the bird gone and something altered in their home. The door is ajar, with a strange light streaming out. The couple finds themselves transfixed, unable to do what they intended—and then the poem concludes: “The bird, again, the bird.” It is an evocative, ambivalent ending to an astonishing poem—a powerful vision of a young couple on the verge of sudden, transformative change.

This poem is intriguingly connected to the last poem in the collection, “How it Stands,” which again concerns unseen birds. “How it Stands” is written as a series of questions and answers. At first, it seems as if Liu Xia is merely being asked about a tree she has drawn—eventually, it becomes clear that she is really being asked about how she represents herself in art and, moreover, how she views her life. The questioner asks if Liu Xia has any company—she responds by referring to birds, which are supposedly in the image of the tree. When the questioner presses her on the birds not being visible, she allows that she does not know how to draw birds, without quite conceding that they aren’t there. When the questioner concludes by accusing her of being “an old, foolish tree,” she stoically responds, “I am.” That these two poems bookend the collection captures the emotional and artistic journey of the collection—from an unseen bird being a symbol and portent of change to a young woman to an unseen bird becoming a symbol of consolation and strength to an older woman in the face of interrogation—from a poem in which the central couple has incredible freedom of movement to a poem in which the central figure is coercively and aggressively questioned.

The rest of the poems in the collection trace Liu Xia’s changing emotional experience—in the face of intense political repression of her and her loved ones. Sometimes, she captures her experiences with grotesque, macabre images, such as in the poem “A Grapefruit” where she writes: “I’d rather be in pain / and die in pain peacefully / then watch my body rot / with maggots squirming inside.” Other times, she better captures her grief with lines that are all the more devastating for their understatedness and quiet sorrow, as in the poem “Snow,” dedicated to her brother: “and I dream of you all the time. / In my dream you quarrel with me— / it must be hard to be my brother.” The title piece of the collection weaves together the more macabre and quietly haunting elements of her work—in it, Liu Xia writes of presumably of her loved ones being imprisoned: “Empty empty empty / so many empty chairs / everywhere….they are frozen / by what’s breathing inside.”

—Staff writer Amy J. Cohn can be reached at amy.cohn@thecrimson.com.