At Harvard, proctor and tutor children are exposed to a wide diversity of people and experiences 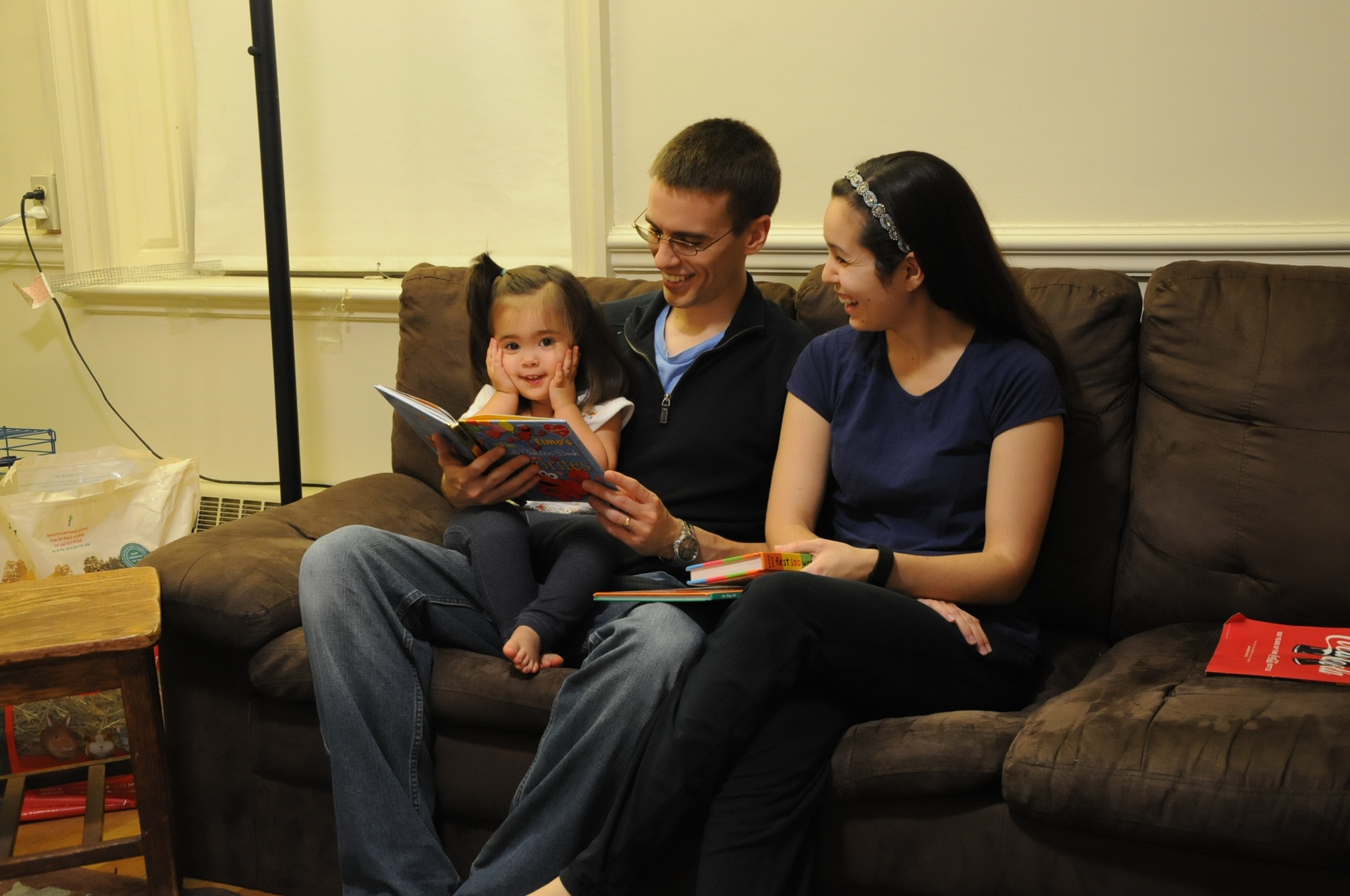 The daughter of proctors Alex and Celeste Douglas reads an Elmo book with her parents in Lionel A.
By Mia C. Karr, Contributing Writer

Robert K. Shapiro has lived at Harvard for nearly his entire life. His mother is Catherine Shapiro, the freshman resident dean for Crimson Yard, and he has spent the better part of his 15 years living within close proximity to undergraduates.

At 15, Shapiro is younger than most College students, but he is among the oldest of administrators’ children who live on campus. He spent his childhood in Leverett House when his mother was a resident dean there, and he now lives in Greenough with her. Because he lives surrounded by students, he regularly interacts with them and sometimes even gets mistaken for an undergraduate.

Though his age makes Shapiro’s experience unique, there are dozens of other proctor, tutor, and administrator families who live on campus, many with young children. Their living situation is anything but conventional, as the families live in College dorm rooms and eat with students in undergraduate dining halls. 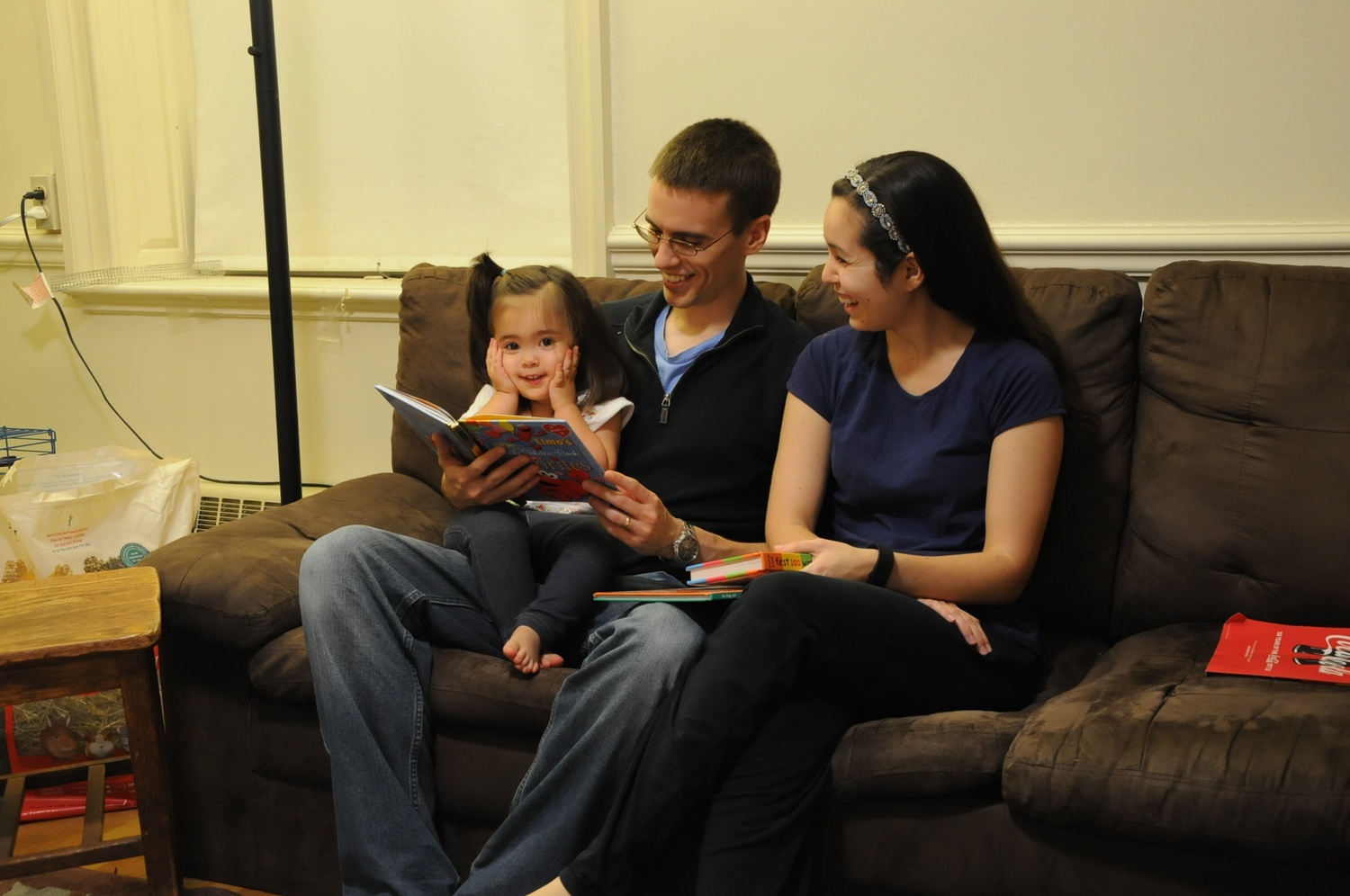 The daughter of proctors Alex and Celeste Douglas reads an Elmo book with her parents in Lionel A. By Jiwon Joung

This nontraditional upbringing comes with its challenges and upsides: The College lifestyle is not designed for young children, but at Harvard, proctor and tutor children are exposed to a wide diversity of people and experiences, and in turn, influence the daily lives of residential undergraduates.

Toddlers are not typical college dorm residents, but often at Harvard tutors and proctors raise their young children alongside undergraduates in similar living spaces.

Like many undergraduates, some proctor and tutor families live in small, one-bedroom suites that lack the ideal amount of space for raising children. When proctor Jason S. Saretsky and his wife lived in Straus Hall, they resided in a one-bedroom suite, which limited their space when their daughter went to bed at night, because she slept in their common room. They upgraded to a two-bedroom suite when they moved to Grays, though, where they currently live with their two children.

According to Jasmine M. Waddell, the freshman resident dean for Elm Yard who has two children of her own, freshman proctor suites are assigned based on seniority. Often times, proctors with children have been at Harvard long enough to attain nicer and larger suites because of that system.

Regardless of seniority, though, Harvard must provide proctors and tutors with suites that do not contain lead paint, according to Adam Muri-Rosenthal, the dean of Adams House. In Adams, all suites without lead paint have kitchens, and Muri-Rosenthal said administrators in Houses try to give tutors with children suites with kitchens whenever possible.

Waddell said Yard Operations, a group responsible for the maintenance of freshman dorms, is working to improve proctor living conditions, which proctors and tutors with families say are generally satisfying.

In dorms, proctors and tutors share close quarters with undergraduates, and sometimes other families. They eat in the same dining halls as College students and often bring their children to dorm or House events.

Saretsky said proctor families often interact with one another as well, generally through shared meals in dining halls.

“It’s a really close-knit community; that’s one of the real advantages of being here,” Saretsky said. “[My wife and I] have often talked about how if we weren’t on campus how tough it would be to not have that community.”

While proctors and tutors with children may find their living experience slightly unusual, for many of their children, living on a college campus is all they have ever known. Because they live with undergraduates, the children meet diverse groups of people from around the world.

“There’s...a huge benefit in terms of exposure to culture,” said Alexander P. Douglas, a proctor in Lionel who lives with his young daughter and his wife, Celeste M. Douglas, another proctor. “Just living in the dorms, you come across people from all different races and backgrounds and countries that you would never come across otherwise.”

Celeste Douglas added that her daughter has many opportunities for speech development because of how often she interacts with undergraduates. Their daughter, Celeste Douglas says, also enjoys campus petting zoos, football games, and, of course, the wide expanse of the Yard.

“She’s basically got the biggest front yard of anyone in Cambridge,” Alexander Douglas said.

Waddell said undergraduates often read or sing to her two children and play soccer with her 6-year-old son. In general, she said, her children are exposed to a broader array of people than they would meet “if they lived in the suburbs.”

Shapiro, the 15-year-old, also said living on Harvard’s campus for his entire life has exposed him to interesting people and opportunities he would not have had otherwise. He often goes to Harvard events—mostly for the free food—and, because he has swipe access to many Harvard buildings, he can spend time nearly anywhere on campus. Shapiro has also worked at events run by Dean of Freshmen Thomas A. Dingman ’67 and knows the locations of most campus vending machines.

And when he was younger, Shapiro said, he was the ball boy for the varsity men’s basketball team.

“The basketball team, they were kind of my heroes and stuff, so I definitely looked up to those guys,” Shapiro said.

Now that he is older, Shapiro said he interacts with students less frequently. He’s even occasionally mistaken for a student himself.

Waddell, the dean for Elm Yard, said seeing Shapiro live on campus as a teenager has made her comfortable with the idea of her own children living at Harvard when they are older. But not all tutors and proctors feel the same way.

The Douglases plan to move off campus when their daughter, who is now a toddler, “starts to understand college culture,” Celeste Douglas said.

“At some point we don’t want our 10-year-old to be living like a college freshman,” she said. “She just doesn’t need to be exposed to certain things.”

Shapiro, though, said his social life is not quite the same as freshmen in the dorm where he lives.

“People are always curious. They always wonder if I get invited to the parties,” Shapiro said. “No one invites me to the parties, because I don’t go looking for parties, and if they’re in the dorms they’re not going to invite me because they know who my mom is.”

Having a family that lives in the entryway can also create a warmer atmosphere for undergraduates, some students day.

The setup “makes it seem more domestic,” said Delaney Tevis ’19, whose proctor has a child. “You’re more at home because there’s not just other college students” in the building, Delaney added.

Patrick T. Hansen ’18, who lived in the Douglases’ entryway last year, said he initially thought it was “a little weird” to have a child in his dorm. As the year progressed, however, Hansen said he grew to appreciate her presence.

“It made the whole entryway feel a bit more like a family,” he said.

The family atmosphere also “made the idea of a proctor less imposing,” Hansen said. “They were more of just like parental figures or also mentors.”

Looking to be respectful of the young children in her entryway, Tevis said she and her roommates are careful to be quiet when they stay up late. Generally, Tevis said, students in her entryway try to minimize their noise levels, which might disturb their proctors’ children.

Muri-Rosenthal, the Adams dean, initially worried that potential noise from loud college students might pose a problem for his son. Now, though, he said the noise has helped his 10-month-old son adjust to sleeping in louder environments, which he sees as a positive.

Plus, because he lives among undergraduates, there are plenty of students interested in babysitting his son.

Besides wanting to babysit the children in their entryways, undergraduates also often enjoy chatting with the families over dinner or in the Yard, proctors say. Saretsky said he and his wife host weekly dinners in Annenberg, when they encourage his students to eat with his family.

By interacting regularly with undergraduates, the Douglases’ daughter has become an integral part of her entryway. According to her mother, she draws birthday cards for every student in her parents’ entryway, and for the past two years, they have invited students to a cupcake-decorating study break to celebrate her birthday.

The presence of families in undergraduate entryways can be mutually beneficial for both the students and the children, as children grow up in a diverse environment and students experience a more homey atmosphere in their dorms.

Shapiro said he “feel[s] very lucky” to live on Harvard’s campus because he has met interesting people and taken advantage of the College’s resources.

But given that he has lived here for most of his life, Shapiro said he does not plan to attend Harvard once he graduates from high school.

“I think when I go to college I want to try something where I can really be independent and really get a new experience,” Shapiro says. “And while I really like Harvard, I don’t think I’d get that going here.”