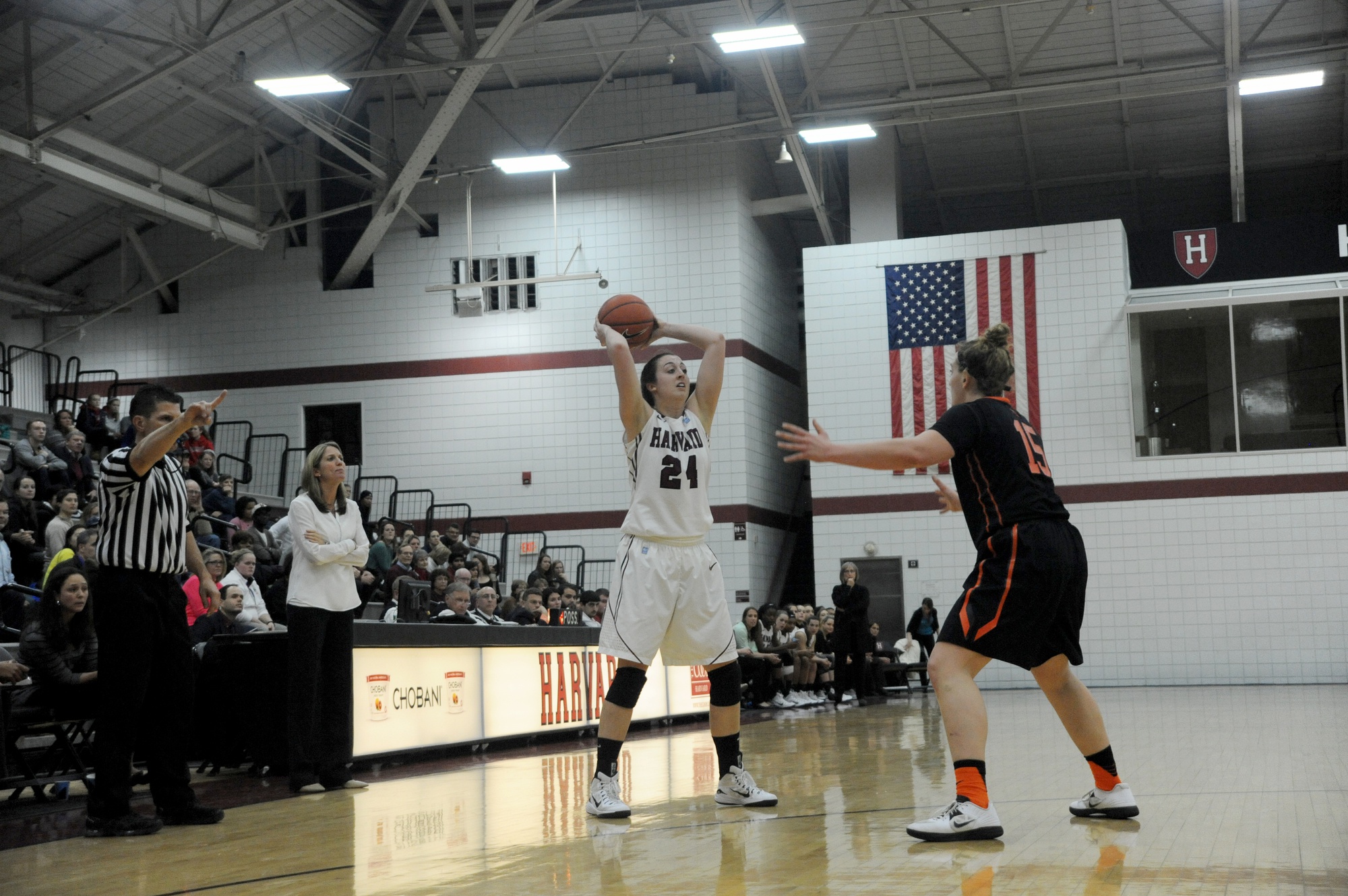 Co-captain AnnMarie Healy put up a team-high 13 points in the team's loss to URI
By Troy Boccelli, Crimson Staff Writer 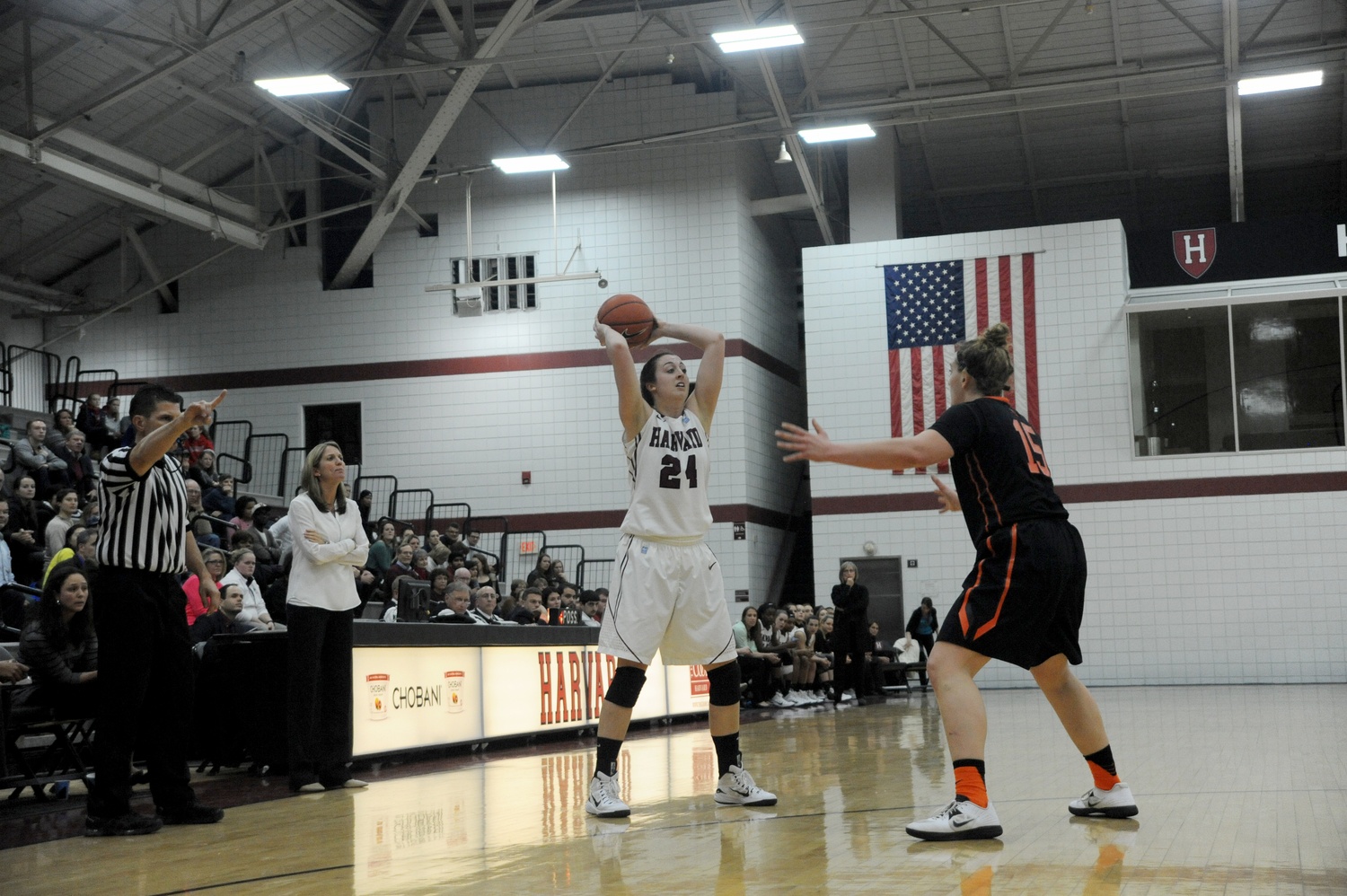 Playing at the University of Rhode Island Tip-Off Classic tournament this weekend, the Harvard women’s basketball team split its matchups in two games that would both be decided by single digits.

Without senior standout Shilpa Tummala on Friday and with a starting lineup that featured two freshman on Sunday, the Crimson (2-2) came into the last minute of both matchups within a bucket of the opponent.

Down by six with 1:23 left on the clock, co-captain AnnMarie Healy pulled up from beyond the arc to put Harvard within three. Sophomore Kirby Porter would go to the line 40 seconds later to put the Crimson within two, but the late rally wouldn’t be enough as the Crimson fell to the Rams in a close matchup on Saturday evening.

In a game that featured poor shooting from both teams, it was the turnovers that Harvard struggled with against Rhode Island. Turning the ball over eight times in the first quarter and 21 times total, the Crimson struggled to run the floor on offense.

“I think it was really close, but I think what it came down to was our turnovers and we let up to many points in the paint,” Healy said. “Going into the game we knew they were a team that could drive and I think that if our rotation help and defense on the dribble were just a little better we would’ve been able to come out with the win.”

Harvard scored 14 points in the paint, which was dwarfed by Rhode Island’s 30.

Even without Tummala and with Healy committing two fouls early in the matchup, the Crimson managed to edge the Ram’s on the boards. Harvard outrebounded Rhode Island 46 to 38.

“I was thrilled. On top of not having Shilpa, AnnMarie got into foul trouble and basically sat out more than half the game,” head coach Kathy Delaney-Smith said. “We were very, very short at the four spot, we even had to play Kirby at the forward spot.”

In a matchup that featured seven ties and five lead changes, the Crimson struggled to make shots late and turned the ball over.

Playing a consolation match against Toledo on Sunday, the Harvard offense came to life, with the Crimson shooting a season high 47 percent. In a game that had nine lead changes, the Crimson pulled away late in the match, with Harvard’s last seven points coming from the free throw line.

“I think the big difference in us today and us in every other game we’ve played is that we finally executed our offense, so it was a good day,” Delaney-Smith said.

After going up by eight with three minutes left in the fourth, the Crimson struggled to keep the lead in the closing minutes of the match. After a long three and two layups, Toledo found itself within four, but never managed to close the gap as Harvard shot 5-for-7 from the line in the last three minutes.

After rotating in three freshman at the guard spot throughout the first three games of the season, Delaney-Smith started freshman Madeline Raster and Nani Redford at the one and two spots on Sunday.

“They were defensive decisions to be honest. We wanted to start with a strong defensive statement and both Murphs and Nani are very strong defenders, athletically and otherwise,” Delaney-Smith said.“It worked out, Nani can get in your head, she was probably very bothersome to the opposing point guard.”

Four of the Crimsons starters scored in double digits on Sunday. Again, Healy led the squad with 20 and Raster scored a season high 16 with four rebounds and three assists.