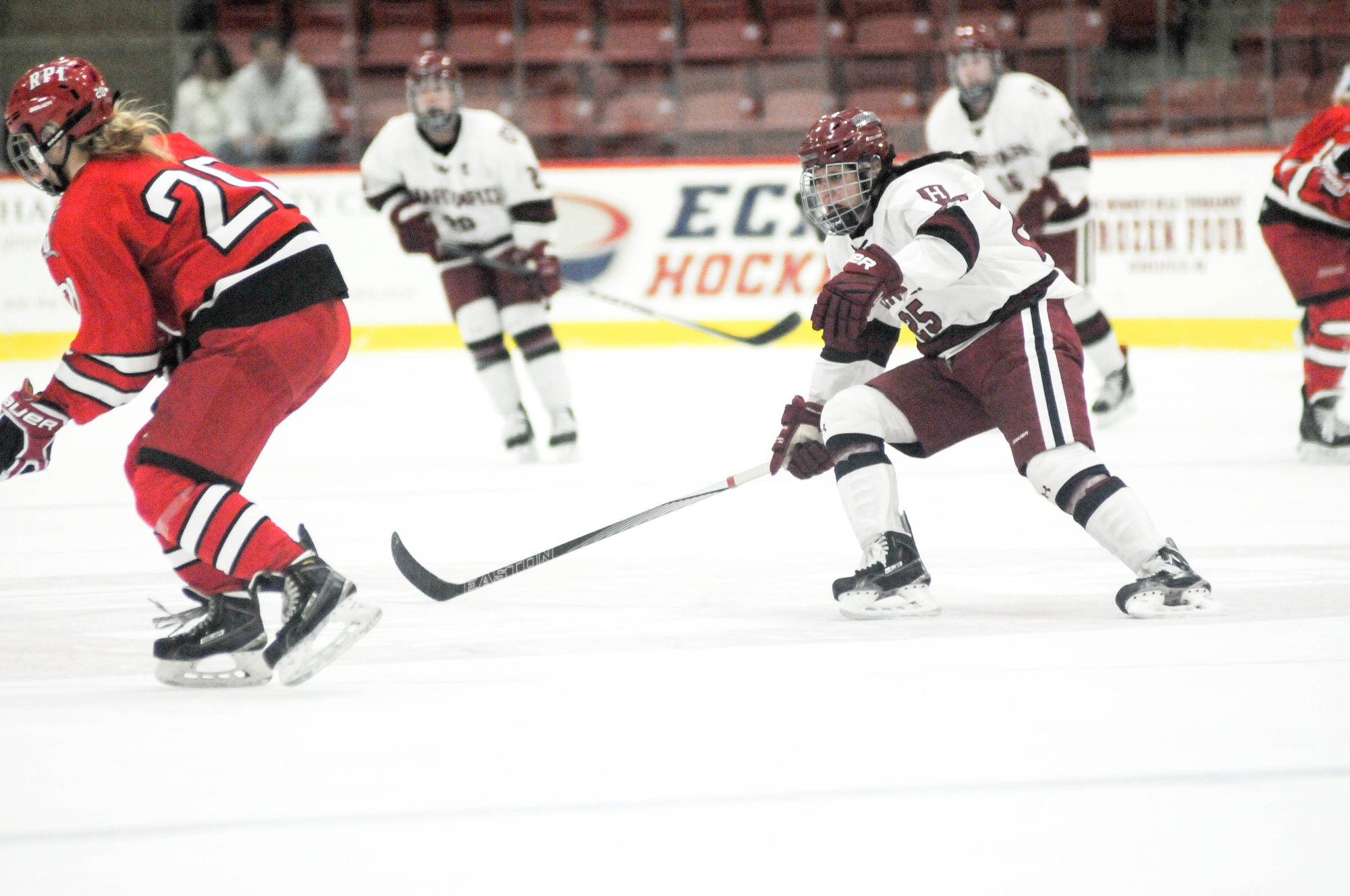 The No. 8/8 Harvard women's ice hockey team extended its winning streak to seven on Tuesday night as it blanked crosstown rival No. 4/5 Northeastern, 3-0, at the Bright-Landry Hockey Center.

The Crimson (7-1-1, 5-1-1 ECAC) managed to shut out the Huskies (11-3-1, 7-1-0 Hockey East), who averaged five goals a game entering the matchup. Defense proved key as senior goaltender Emerance Maschmeyer had 31 saves in the fast-paced battle.

“I think [the game] was really like a track meet; it was really up and down action,” Harvard coach Katey Stone said. “Both goaltenders played well and we had to really contain their team’s speed today, and I think we did that with really good team defense.”

Harvard opened the first five minutes of play battling for possession but controlling faceoffs by a 3-0 margin. A Crimson penalty and resulting Northeastern power play six minutes into the first period drastically tilted shots on goal and possession in favor of the Huskies. Multiple saves by Maschmeyer, who ranked second nationally entering the game with a .967 save percentage, ultimately killed the power play.

Despite Northeastern almost doubling Harvard in shots on goal, 12-8, junior forward Sydney Daniels found the back of the net with a shot to the top right corner with less than two minutes left in the first period. Sophomore forward Haley Mullins and senior forward Miye D’Oench claimed assists for the first Crimson goal as D’Oench’s shot deflected to Mullins, who found Daniels inside the left faceoff circle for the Southwick, Mass. native’s fourth goal of the season.

“We were just ready to play. We were on our toes and our kids really were flying,” Stone said. “We were very committed to playing at both ends of the ice and in all three zones. We made the little plays, blocked a lot of shots. We were pretty tough on the puck. Our defensemen again played really well.”

As second period play began, an impressive save by Maschmeyer kept the score at 1-0 five minutes in as the Huskies continued to apply pressure and lead in shots on goal.

Five minutes later, Harvard almost got on the board for the second time when sophomore forward Karly Heffernan wrapped behind the Northeastern net and popped the puck behind Huskie rookie goalkeeper Brittany Bugalski. The goal was immediately placed under review and ultimately wiped away due to sophomore Lexie Laing having been pushed into the net and displacing Bugalski.

A penalty on Northeastern senior forward Jordan Krause afforded the Crimson the opportunity to redeem itself for the lost goal. Only 13 seconds into the power play, freshman forward Grace Zarzecki tipped the puck in with the help of an assist from junior defenseman Abbey Frazier after Laing won possession from a faceoff to start the play. Zarzecki improved to five goals on the season.

The Crimson solidified its lead five minutes into the third period when senior forward Jessica Harvey scored her third consecutive goal of the season after a shot by freshman defenseman Kaitlin Tse was swatted away.

By the end of the game, shots on goal had shifted to Harvard’s favor, 34-31, helped by 15 in the third period.

Penalties ran high for both teams on either side of the puck with Northeastern registering four penalties and Harvard registering five. But the Crimson’s ability to kill all five power plays proved vital to its victory.

“We had a lot of penalties called against us,” Maschmeyer said. “So I think just not getting down on those penalties, battling through that, and killing off the penalties and after that gaining that momentum and bringing it forward in the offensive zone.”