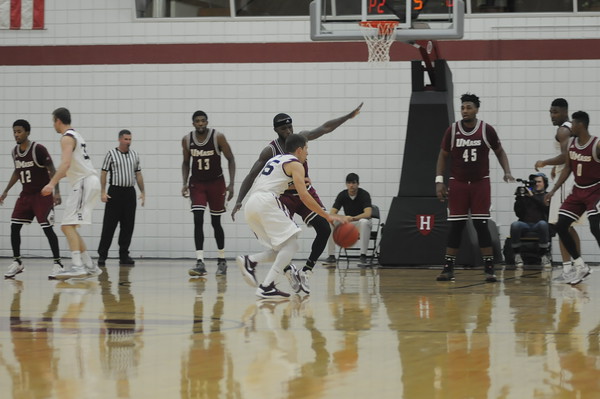 After getting off to a slow start, junior guard Corbin Miller and several other bench players provided a spark for the struggling Crimson. By Eliza R. Pugh
By David Freed, Crimson Staff Writer

WORCESTER, MASS.—As the clock expired on a 50-49 Holy Cross victory, its second consecutive one-point win over the Harvard men’s basketball team (2-4), the Hart Center was a scene of pure jubilation.

Junior Robert Champion, whose three with 2:45 to go put Harvard in a six-point hole from which it never recovered, was lifted up in the air by his teammates, violently pumping both fists. Senior Anthony Thompson, who hit more free throws in the second half than the Crimson did in the game, beat his chest with one palm, gesturing to the crowd with the other. The official Holy Cross (3-3) social media account was effusive, tweeting “TWO STRAIGHT OVER HARVARD!!”

The reaction, fit for a program-defining upset, highlighted the disparity Sunday between perception and performance.

The Crimson, the de facto heavyweight of the region that dominated state foes to the tune of a 21-3 record over the last five seasons, fell to 1-3 against Massachusetts competition, with its sole win against a Division III squad. A team that had not finished outside the top 100 in Ken Pomeroy’s rankings since 2010 found itself 181st Sunday afternoon.

The culprit, once again, was the Harvard offense. The Crimson shot just 37 percent and committed 14 turnovers, misfiring on three-quarters of its three-point attempts and scoring just 12 points in the first 12 minutes of the second half.

“I guess the overall word for me … disappointed comes to mind,” Harvard coach Tommy Amaker said.

HELP OFF THE PINE

The Crimson started the game sluggish, falling behind 9-0 in less than three minutes as the Crusaders hit their first four shots. The interior defense, a bright spot for the Crimson through four games, was slow to react twice on backdoor cuts as Bill Carmody’s squad hit layups on four consecutive possessions.

Barking at his troops, Amaker immediately looked for a spark off the bench. The ensuing lineup—senior Patrick Steeves, junior Corbin Miller, sophomore Chris Egi, and freshmen Corey Johnson and Weisner Perez—immediately went on an 8-3 run to bring Harvard back into the game.

“I thought our kids off the bench really gave us a short in the arm and gave us an opportunity to make it a game,” Amaker said.

Steeves, who played a career-high 26 minutes, was a fixture down the stretch for the Crimson. The senior led the team in both rebounds (12) and assists (seven), adding two threes.

The versatile forward played three for Harvard down the stretch in big lineups with classmate Evan Cummins and junior Zena Edosomwan, providing the Crimson with more spacing and passing at the position than starter Agunwa Okolie. He twice found Edosomwan with lob entry passes for dunks, a play later the Crimson went back to trailing by two with 55 seconds left. This time, however, Edosomwan fumbled the ball out of bounds, costing Harvard its best shot at a tie.

“He gives us a lot,” Edosomwan said. “He’s great defensively, can shoot the ball, [and] is a good passer.”

Steeves, who did not see the floor during his first three years on campus while battling knee injuries, was playing in just his third game ever for the Crimson.

“Honestly, understanding how hard he has worked to get to where is after not playing for almost three years … it’s beautiful to see him on the court,” Edosomwan said.

STRUGGLES AT THE LINE

Looking at the box score after the game, both Amaker and Edosomwan fixated on one number—free throw shooting. While the junior was more shocked to hear the team had shot just eight times from the line, converting three, both were equally direct.

“We are not getting there and when we get there, we are not converting,” the coach said.

“I don’t know what to say … Usually we try to pride ourselves on getting to the line,” his player said.