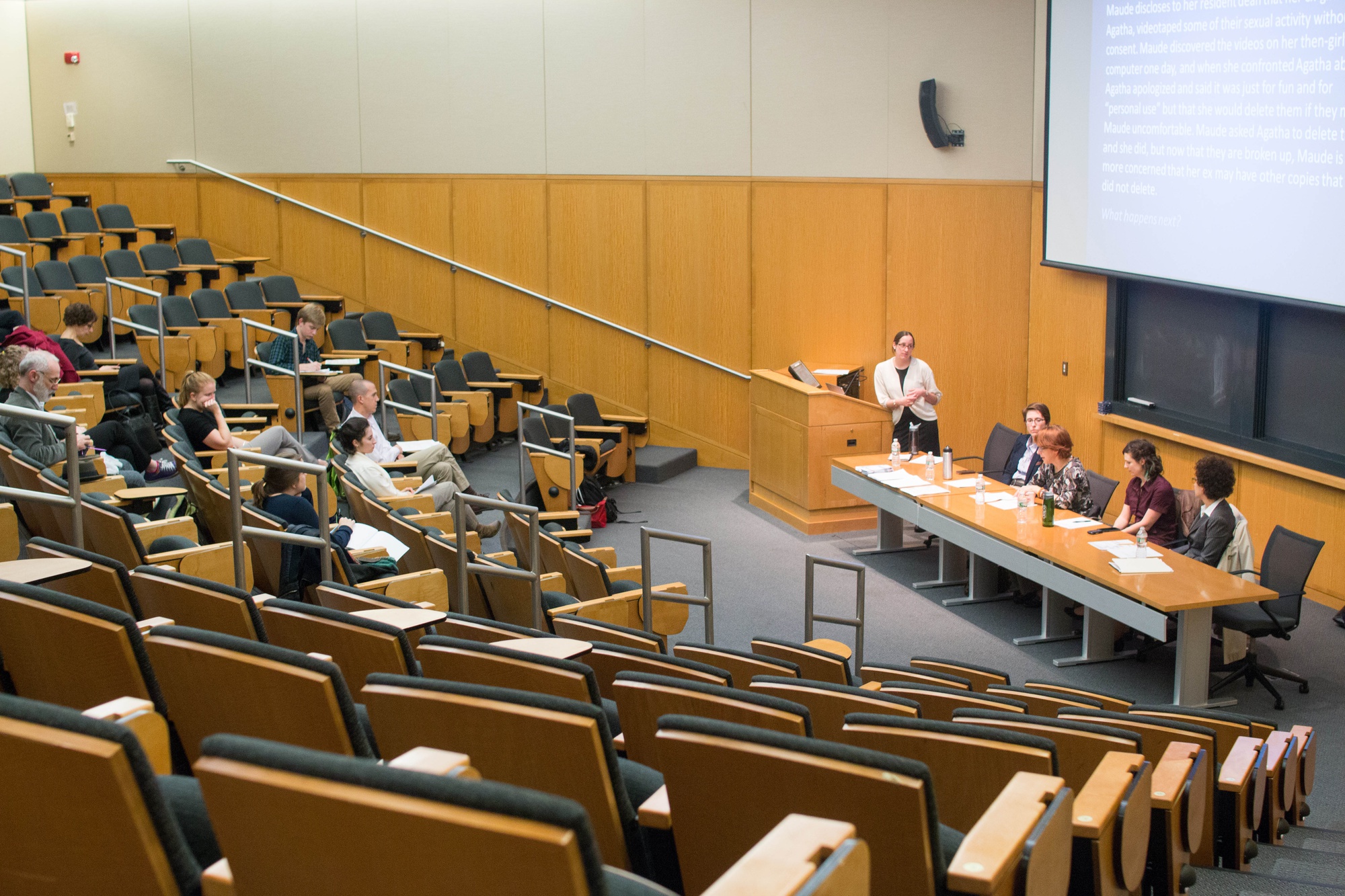 Roughly a dozen people attended an informational panel about the Office of Sexual Assault Prevention and Response, Title IX, the Office of Dispute Resolution, and the Administrative Board in Tsai Auditorium on Tuesday evening.
By Andrew M. Duehren, Crimson Staff Writer

Harvard administrators from several offices involved in responding to sexual assault on campus explained their respective roles and Harvard’s response and support mechanisms more broadly at a forum and question-and-answer session on Tuesday. 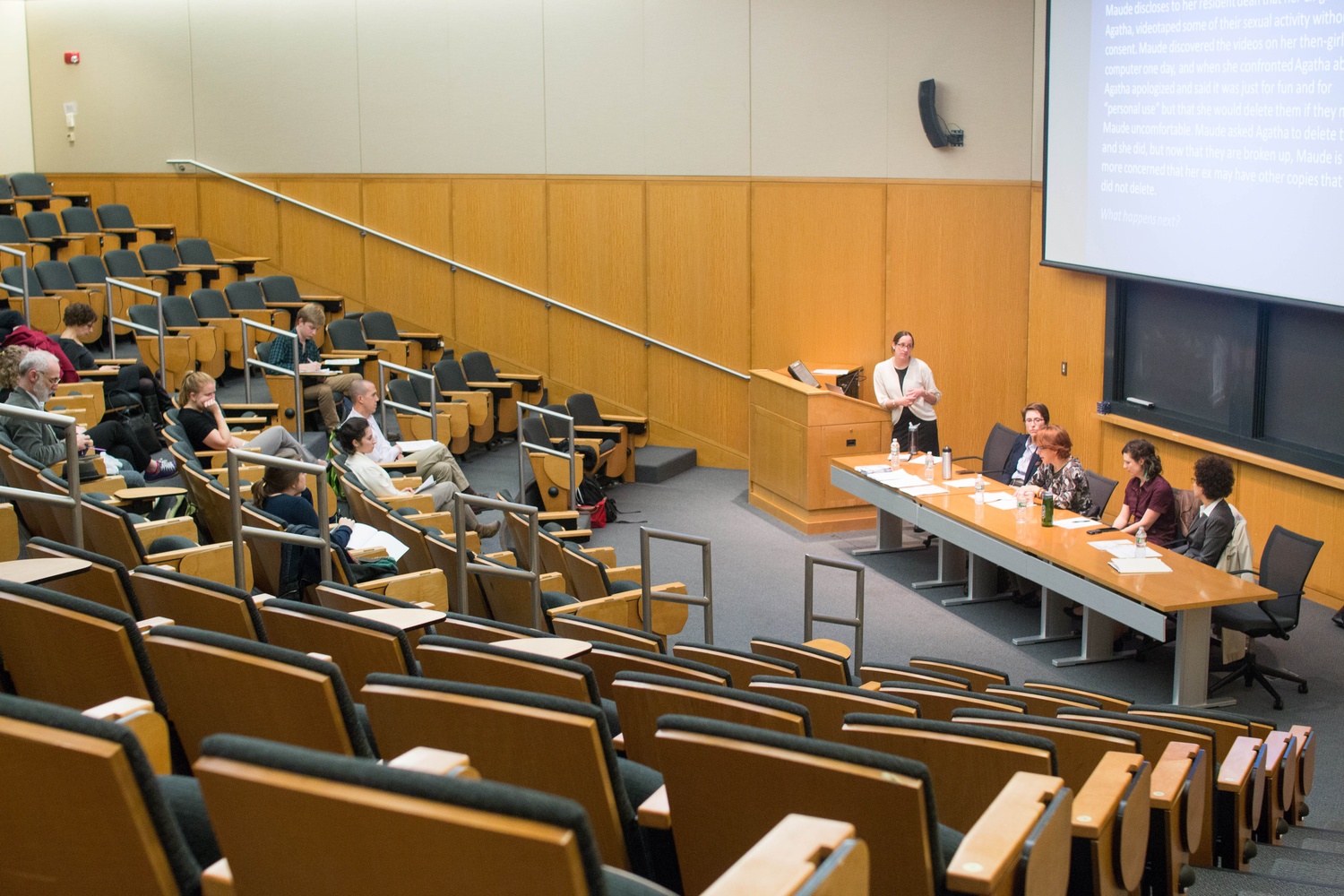 Roughly a dozen people attended an informational panel about the Office of Sexual Assault Prevention and Response, Title IX, the Office of Dispute Resolution, and the Administrative Board in Tsai Auditorium on Tuesday evening. By George J Lok

At the 90-minute event in Tsai Auditorium, attended by about a dozen Harvard affiliates, the administrators discussed a fictional scenario and walked through different procedural possibilities through their respective offices.

The panelists included Mia Karvonides, the head of the University’s Title IX office; Lauren E. Brandt, the secretary of the College’s Administrative Board, which hands down sanctions in student sexual assault cases; Alicia Oeser, the director of the Office of Sexual Assault Prevention and Response; Emily J. Miller, a College Title IX coordinator; and Catherine Shapiro, a freshman resident dean.

The panelists described the path a student might take after getting in touch with a resident dean, explaining the concepts of mandatory reporting and confidential support; resident deans are mandatory reporters, meaning they must tell a Harvard Title IX coordinator if a student tells them about an instance of sexual harassment.

Oeser described the emotional support a student might receive at OSAPR, which can offer students more confidentiality. “If someone just needs to talk, we can do that,” Oeser said.

Oeser, Shapiro, and Miller said they might help a student attain interim support measures like extensions on academic assignments or no contact orders following an instance of sexual harassment or assault. Miller discussed how she might help a student file a formal complaint.

“If they take me up on it, we sit there, we go through the procedures,” Miller said.

Detailing a fictional scenario in which a student wants to file a formal complaint, Karvonides discussed the investigation, adjudication, and appeals process through Harvard’s central Office for Sexual and Gender-Based Dispute Resolution, which she oversees. While an investigative team from ODR investigates and determines guilt in student sexual harassment cases, a separate body of administrators and senior faculty from across the University review appeals in the case of a procedural error or if a new piece of information could change the initial findings.

Karvonides also said her office states and reiterates that students involved in cases have the freedom to involve a lawyer as an adviser throughout the process.

Finally, Brandt described how the Ad Board sanctions students who ODR determines have violated the University’s sexual harassment policy. Though the Ad Board cannot change ODR’s determination of guilt, the board hands down sanctions after hearing statements from the students involved.

At the end of the procedural walk-through, the panel fielded questions, which ranged from the timeline of the adjudication process to hypotheticals regarding sanctions.

In response to a question from an attendee, Brandt said the Ad Board determines sanctions on a case-by-case basis but would only consider more serious sanctions when a student is found to have violated Harvard’s sexual harassment policy.

The public explanation of the intricate network of sexual harassment support services and investigation and adjudication processes in place at Harvard comes a little more than a year after the University overhauled its approach the issue.

It also follows the release of the results of Harvard’s sexual conduct climate survey, which indicated that the vast majority of student respondents did not know very much about the University’s process. In the survey, 71 percent of students said said they were not at all or only a little bit knowledgeable about what happens when a student reports an incident of sexual assault or misconduct, while 8 percent said they were very or extremely knowledgeable about the process.