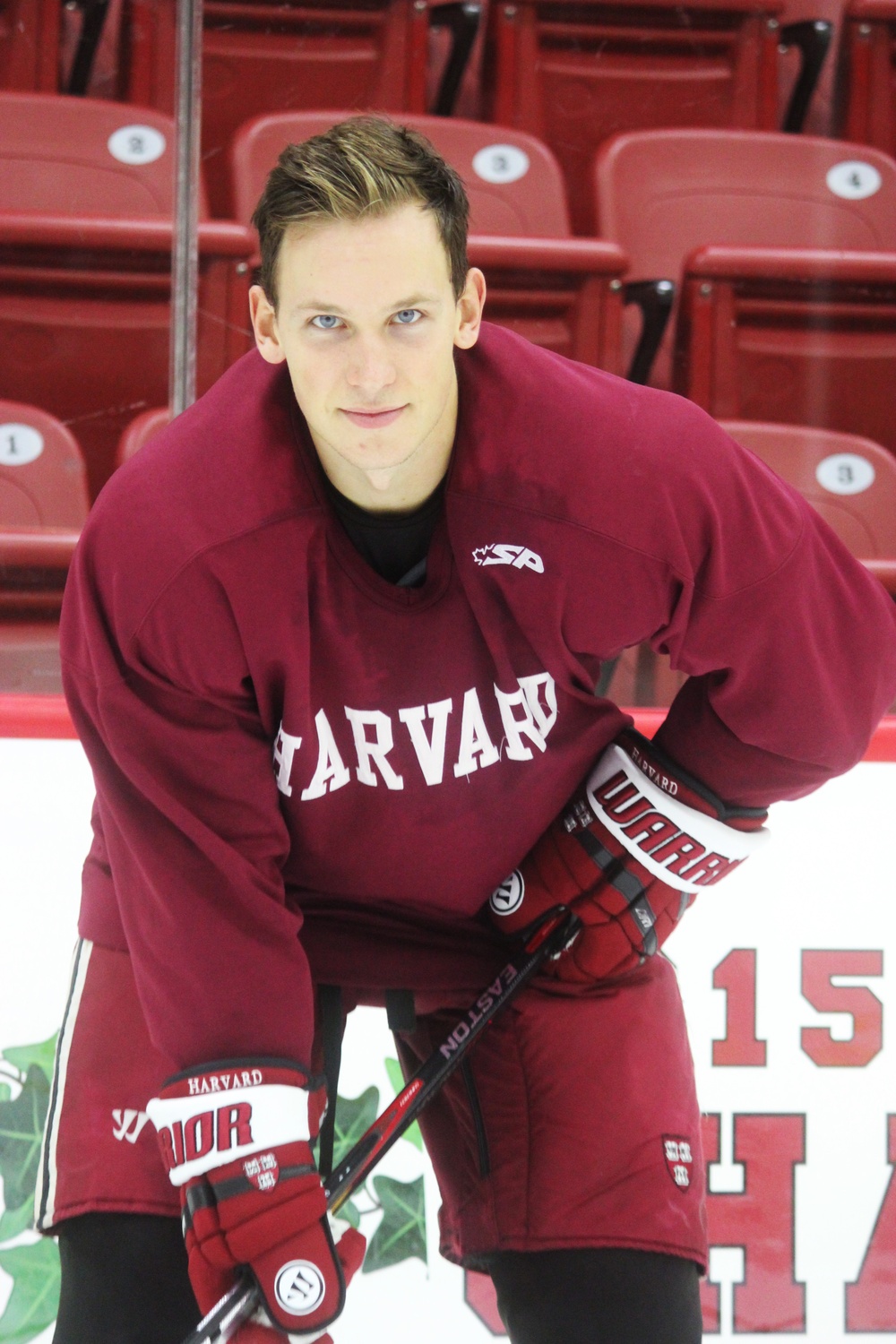 Harvard senior forward Kyle Criscuolo has a career plus-minus of plus-33 in his career. By Lauren A. Sierra
By Michael D. Ledecky, Crimson Staff Writer

Over the last century, few Harvard athletes have approached the legend of George Owen Jr. ’23.

A three-sport varsity captain, Owen never lost to the Elis on the diamond, the gridiron, or the rink while playing nearly every position. In his first of five seasons as a professional hockey player, he became the first documented NHL player to wear a helmet—his old Harvard football helmet—and won a Stanley Cup with the Boston Bruins. He joins Princeton's Hobey Baker in both the U.S. hockey and college football halls of fame.

For 92 years, Owen also held a special distinction among Harvard men’s hockey captains: he was the last Crimson player to captain the team for multiple seasons. But then an undersized right wing from South Jersey came along.

For the second straight year, Kyle Criscuolo leads Harvard into November. Of the 121 men’s hockey captains to pass through Harvard, he will be just the fourth to serve two terms. According to his teammates, that’s not an accident.

“I think he’s very wise beyond his years. He’s just somebody that people look up to as a model citizen, somebody you aspire to be both on and off the ice,” junior forward Tyler Moy says.

“You see him going out there every day, and he’s working as hard as he can. He does all the things right on the ice,” junior forward Alex Kerfoot says.

“Kyle is a great mentor. He leads me in a great direction not only in hockey but also in school,” freshman forward Ryan Donato says.

At the end of each of Criscuolo’s three seasons at Harvard, his teammates have chosen him to receive the team’s Ralph “Cooney” Weiland Award for “devotion to the game.” Last March in Lake Placid, Criscuolo accepted the Whitelaw Cup at center ice following Harvard’s 4-2 win over Colgate in the ECAC Hockey tournament final. The night before, he received the conference’s student-athlete award.

“He commands very little spotlight but earns the respect of everyone around him because he’s willing to put in the work every day and do everything the right way—even when no one’s looking, and I think that’s what his teammates really respect and appreciate,” Harvard coach Ted Donato ’91 says.

“Coaches say things about players—they’re the first one on, last one off, hard workers—but Kyle was different,” Dennehy says. “He’d go out on the ice by himself or with another guy before practice and work on some really creative things.”

Criscuolo would fill the 15 minutes before his prep school practices with various passing drills, honing his eye for angles around the ice. His repertoire included saucer-pass exercises from behind the net and bank-pass challenges off of goal posts.

His teammates became intrigued and joined in. Eventually, some of the drills made their way into Choate’s games.

“He just made everybody else around him better,” Dennehy says. “I think he helped other good players get better and start to think the game differently.”

His generously-listed 5’9”, 175-pound frame does not easily command the attention of scouts, but his speed and cerebral style have earned Criscuolo second looks.

Earlier this year, Criscuolo planned to attend the Pittsburgh Penguins’ weeklong prospect development camp in July, but he faced a difficult decision about a nagging injury: he could take a cortisone shot and attend the camp, or he could receive surgery and recover over the summer to ensure his health for his senior season.

Criscuolo opted for the surgery and skipped the camp.

“He’s a guy who put his team first and said, ‘I want to have my best health possible for next year; I want to be around as much as I can,’” Donato says.

Criscuolo’s team-first instincts seem to originate with his father, who grew up playing street hockey in the suburbs of Philadelphia before captaining the club team at Drexel University.

Bob Criscuolo had no long-term plans when his second son started skating at age five, but coached him up the ranks as he progressed from the house league to the travel squad.

Out of a lack of high-level hockey experience, Bob says there was not much he could teach his son in the way of intricate skills, so he stuck to three main points: “work hard, be a good leader, and play for the team.”

“He always tried to keep hockey fun for me,” Kyle Criscuolo says. “No matter what age—he wanted me to enjoy it and always harped on the team being bigger than the individual.”

Drew Faust will not receive any telegrams about Kyle Criscuolo this year. Nobody expects him to be Mr. Everything like Harvard’s last two-time captain.

On Harvard’s first line, Criscuolo’s creative yet blue-collar skillset contrasts slightly with the glitzy style of his co-captain Jimmy Vesey, who finished as a finalist last season for the award that bears the name of Owen’s hall-mate. Criscuolo, who assisted on 19 of Vesey’s NCAA-leading 32 goals last season, is more likely to chip and chase the puck than dangle around defenders.

In all likelihood, the Southampton, N.J., native will once again avoid the spotlight this season as his star linemate grabs the headlines. By all indications, Criscuolo is okay with this.

In Harvard’s only exhibition game this year, the team tested out its new home uniforms. The set came with only one front-jersey sticker for the co-captains. Criscuolo let Vesey wear the “C.”

“I’m grateful to have Jimmy as a co-captain, and in terms of his talent, he’s second to none. I’m just happy to be on his line and get the other team’s best everyday,” Criscuolo says.

While he does not figure to surpass his all-world linemate at the pro level, Criscuolo will maintain his dedication to the game in one way or another following Harvard’s commencement exercises next May.

During his recovery from surgery this summer, he spent a week at the Washington Capitals’ front office in Virginia, where he assisted the team’s management in contract negotiations. He also coached a group of high school players through a hockey-specific gym regimen in Philadelphia.

Perhaps one day, Criscuolo will stand behind a bench or take a seat at the opposite side of an arbitration table. But for now, he will work toward following Owen into that League and onto that Cup.

“I’m not going to be a guy that’s going to walk right in,” Criscuolo says, “but having the NHL just one or two levels above college hockey, it gives me hope that I could earn a spot there as well if I get the right opportunity.”